It’s been a while since we talked about Silver. And I don’t hear anyone else talking about it. So that tells me that maybe we should look a little closer and see what’s going on.

I think the recent action has been constructive and is looking US Steel-ish. A few weeks ago I went on Bloomberg TV and said that I liked the US Steel even though others hated it. Both of these have some similar characteristics: Good risk reward, both somewhat forgotten about, positive momentum divergences, and flattening long-term moving averages.

Let’s take a look (I know I’m sorry about all these lines and colors, but I think they’re all relevant): 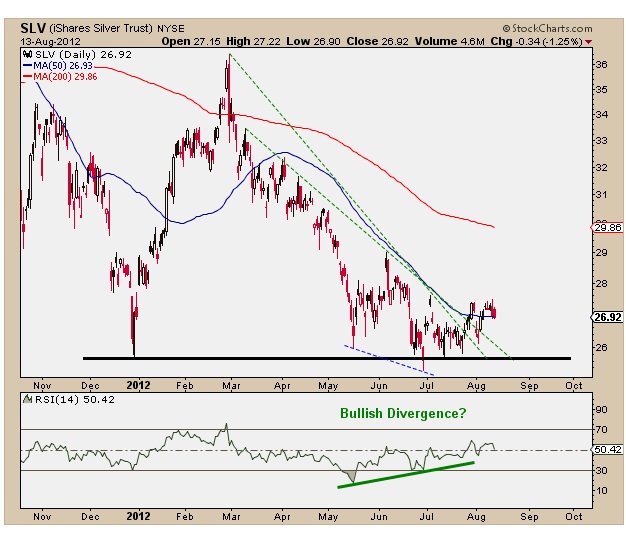 First of all, there is longer-term support right around this 25.60-25.70 level in $SLV. This support held in December and rallied hard earlier this year. We went on record loving precious metals back then and we like it here at this price once again.

Also, when $SLV made new lows at the end of June, the Relative Strength Index was already putting in higher lows (just like $X was doing 2 weeks ago). This bullish divergence gives us a heads up not too fully trust that new low – especially when it comes at key support levels.

Trendlines have been broken. From the highs in late February you can draw an aggressive trendline, or a more conservative trendline from the next lower high – no matter, both have now been broken.

The moving averages have flattened out. This is one of the reasons that I liked $X. The breakout attempts earlier in the year ran into declining 200 day moving averages that just weren’t ready. This consolidation (in both $X & $SLV) allowed the smoothing mechanisms to flatten out, making it much easier to break out from. The 50 day moving average in $SLV has helped as well, now flat.

So this is why I like the recent action in Silver. But the most important thing is the risk/reward (always). We’re a buck and half above key support, with a ton of upside (at least mid-to high 30s). That’s the sort of proposition that we’re constantly looking for.