One of my favorite presentations at the MTA Symposium last week was MacNeil Curry’s. He is the current Rates and FX Strategist for Bank of America Merrill Lynch and was also one of my sponsors for the CMT program years ago. At the conference, he made some pretty big calls for Gold prices that are making headlines.

He was basically saying that trends like these don’t typically end quietly. While last year’s move in Silver ended with a parabolic move, Gold still hasn’t seen that sort of action. Until we do, this orderly advance should continue. 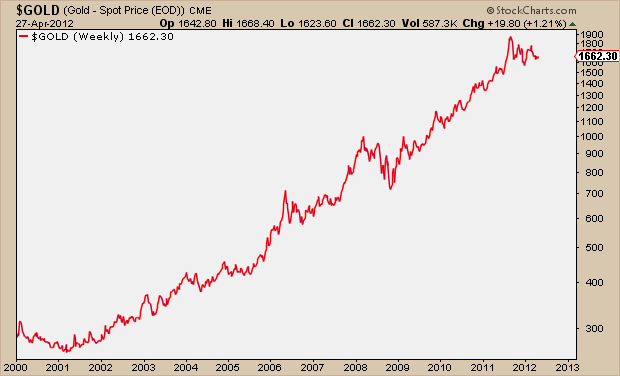 Here are a few things Curry had to say about Gold:

– From an Elliott Wave perspective, we have seen a nice, solid, orderly advance

– Any long-term commodity advance tends to end with, “a massive speculative blow-off.”

– Gold can go parabolic completely on its own. He doesn’t think you need a world ending scenario for that.

– Gold prices would need to double in less than a year to show the kind of extreme momentum that would signal the end to the long-term cyclical uptrend. “Until we see price action take some kind of massive speculative blow-off, where prices effectively double in a year or less, I have to maintain a long-term bullish bias.”

– Gold’s price could double in a shorter time frame, and that he was watching momentum most closely for indication of the kind of speculative fluctuations that would signal an end to the secular bull trend.

About that Inverse Head and Shoulders Pattern in Gold (March 21, 2012)

Gold May Touch $7,000 Per Ounce Before End of Uptrend (EconomicTimes)