There have been some fireworks to kick off the new year. One of the biggest developments in 2022 has to be the US 10-year yield breaking to its highest level in two years.

The direction in which yields resolve from their 2021 consolidation will impact all the major asset classes, including bonds, stocks, and commodities. We’re already seeing procyclical assets catch an aggressive bid as the 10-year flirts with an upside resolution.

For now, the path of least resistance is higher. But we still need to see follow-through and confirmation before we can be comfortable that these new highs are here to stay.

When we look at the international bond market, it’s not just domestic Treasury yields that are on the rise. We’re actually seeing rates make new highs all across the developed world.

This is bullish confirmation of what we’re seeing domestically, as it suggests the current rising rate environment is a global phenomenon and not just a US story. 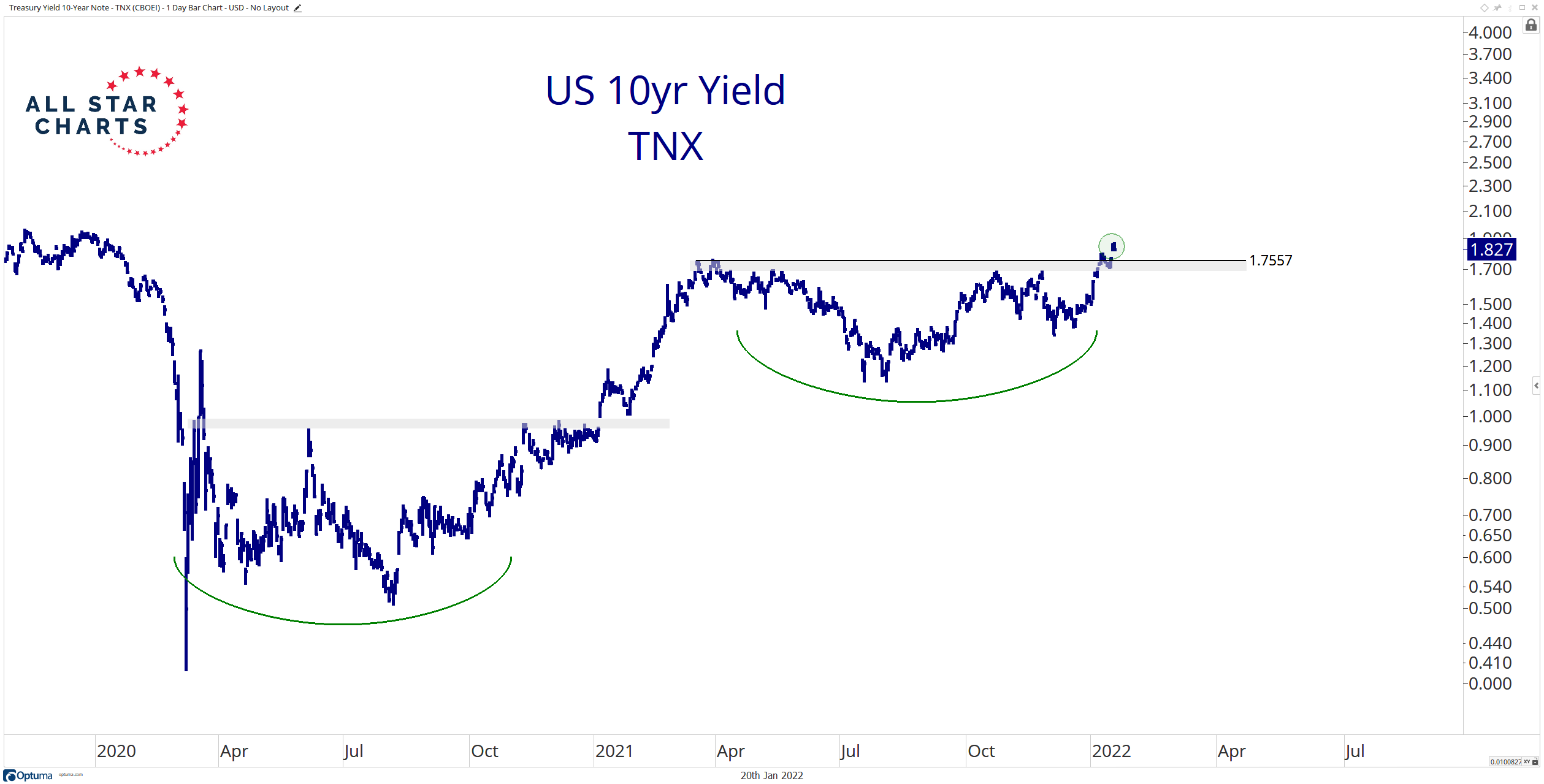 After several quarters of going nowhere, the middle of the curve is re-joining the ongoing rally at the short end of the curve. The 10-year yield didn’t just take out its former 2021 highs. It did so with a bullish breakaway gap.

Now we just need to see the move stick.

The last time the 10-year yield was at this 1.75% level was early 2021, when the backdrop for risk was much different. Crude oil is printing new seven-year highs. Bank stocks up and down the cap scale are breaking out.

And the outperformance from the energy sector is front and center.

None of this bullish supporting evidence was present last time yields were at these levels.

Another new data point is the confirmation we’re seeing from bond markets around the world.

Not only are most developed market yields trending higher in synchrony. There’s also a growing list of breakouts from multi-year bases to new highs.

Here’s the German 10-year yield moving to its highest level since early 2019: 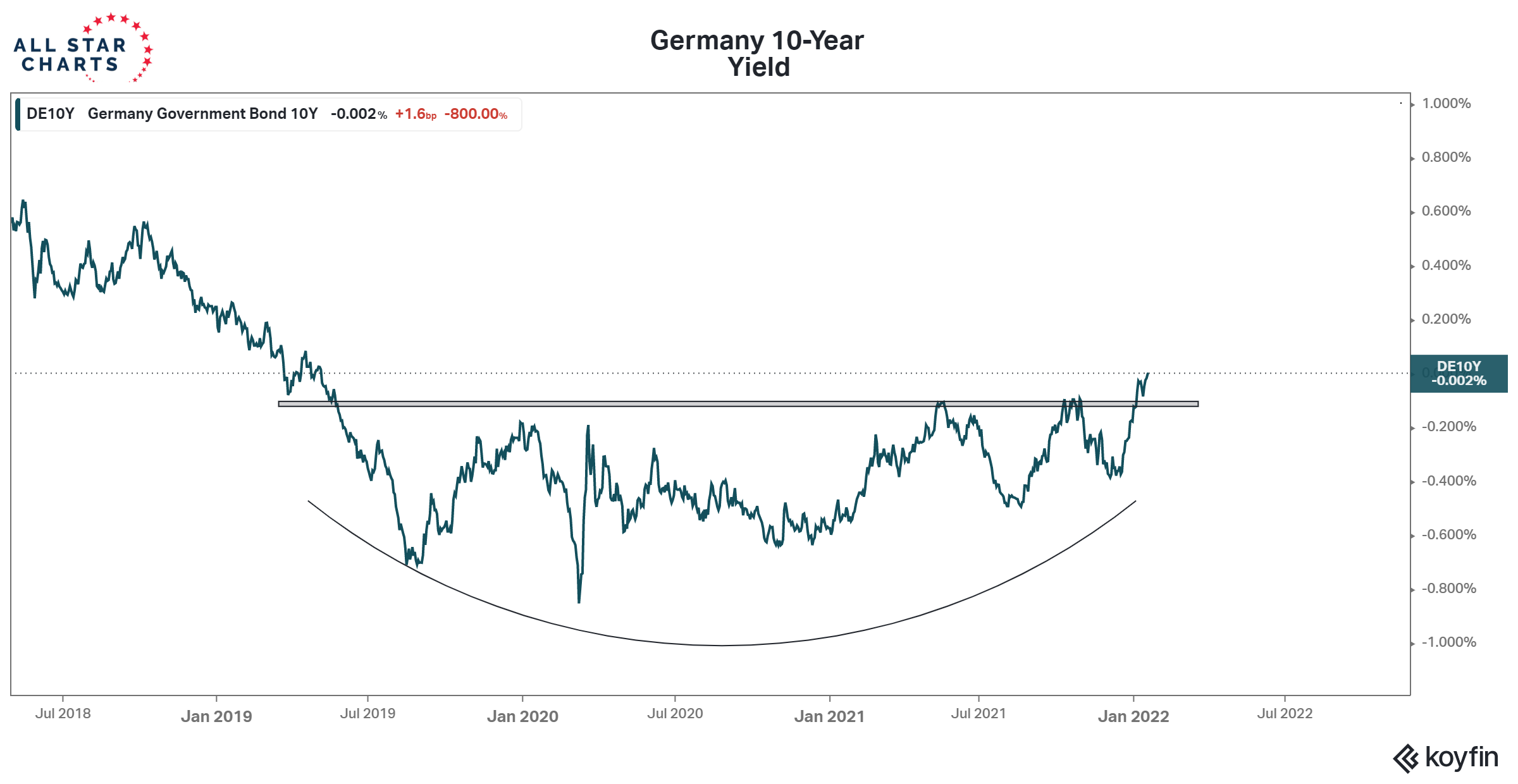 For the first time in more than two years, the German 10-year is approaching positive territory. To be fair, it’s still negative as of this writing — but by less than 1 basis point.

Can you imagine the German 10-year positive again? That’s definitely one for the bulls.

Here’s the UK 10-year yield as another example: 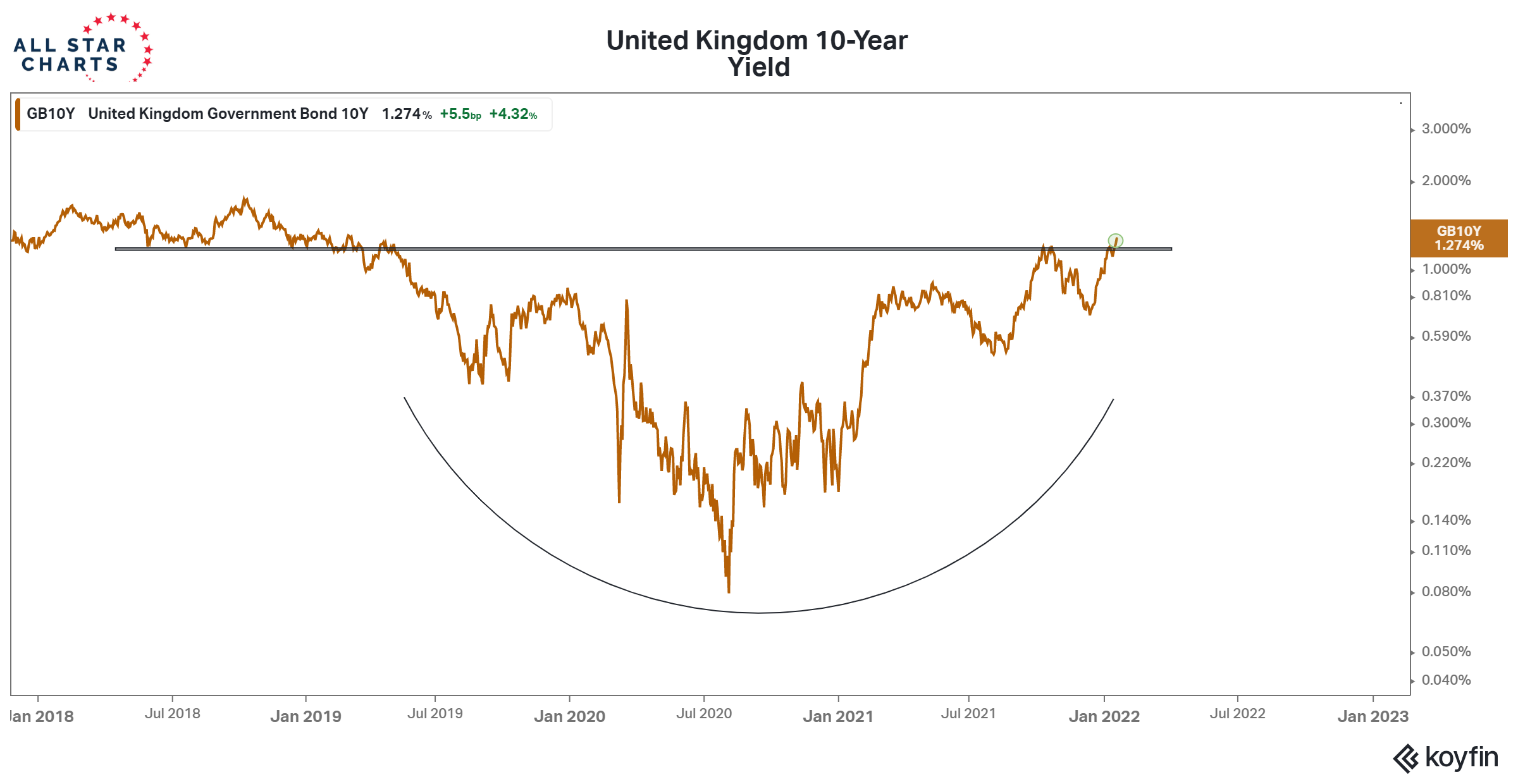 Like Germany, we have a big base breakout to new multi-year highs. This is another piece of data supporting the recent move in government bonds in the US and abroad.

We can now look to the UK 10-year and other benchmark yields for confirmation of what we’re seeing stateside.

For instance, if these new highs are going to stick and rates are going to continue higher, we would expect to see broad participation from developed credit markets.

In other words, these base breakouts for benchmark rates around the world should hold.

On the flip side, if we see these moves from the UK and Germany start to fail and fall back into the former ranges, then we’re likely to see the same from the US.

And guess what: All of those breakouts in bank stocks are probably failing, too.

The bottom line when studying the bond market and the intermarket landscape is we can look for confirming action or the lack thereof from international credit markets.

For now, it appears the US and developed European bond markets are in agreement. Banks in the US and abroad are also confirming the recent action.

If these new highs for banks and yields around the globe begin to fail, it will be time to sit up and take notice. That would likely be occurring in an environment where the US 10-year is falling back below 1.75%.

But, for now, these breakouts appear to be valid, and that’s a very bullish development. If that changes, we’ll be right here talking about it.

Be sure to check back!

Based on the most recent Federal Open Market Committee meeting, the market is now pricing in a rate hike in March 2022.

Here are some of the target rate probabilities for the March meeting based on fed funds futures: