In light of this week’s events, I hope it’s become more clear than ever to you that it is MUCH MORE important for traders & investors to focus on the behavior of markets themselves, instead of the goods and services in which the market deals.

I came to this revelation in 2005 when my $MECA completely collapsed because some activist hedge fund manager wasn’t able to accomplish the things he said he would or that we were betting on him doing.

I lost like 70-80% or something like that. Plus, you have to include all the opportunity cost in me not owning the other things, considering it was an epic bull market and I was sitting there buying this p.o.s. $4 horsetrack in Baltimore

You live and learn right?

Now you know part of the reason why I am the way I am.

But I got over it. Like a big boy. With big boy pants and everything.

And to be clear, I got burned again plenty after that. So I still hadn’t learned my lesson.

But at least I realized that I didn’t care about the companies themselves. I was not interested in their earnings, products or employees. None of that was my problem, or any of my business for that matter. I was only interested in making money in the stock.

That’s when I decided to pursue my CMT designation.

And the rest is history.

Fast forward a decade and a half later and here we are. How are those fundamentals working out for you guys? lol

Seriously though. Where do Graham and Dodd cover the Reddit comments vs sales ratio explanation?

It’s hilarious just thinking about it.

But for technicians, this is just classic market behavior. Short squeezes have been happening since the beginning of markets. It’s a classic characteristic of healthy environments. When there’s irresponsible risk being taken, it gets fixed, often very quickly.

We saw it in natural gas a couple years back with that PM who even created a Youtube video after blowing up. He got what he deserved after trying to pick up too many pennies in front of the steamroller.

How about the Hunt Brothers corning the Silver Market 40 years ago? Look it up.

It’s been happening for hundred of years.

It may not have made the NY Post because the trader getting squeezed didn’t own the New York Mets. But it happens all the time and on all timeframes, even intraday.

We’ve been analyzing short interest for trade ideas for most of my career. I remember being heavily long HLF because I though Bill Ackman was getting squeezed.

This is technical analysis 101. We’re analyzing the behavior of the market and market participants.

We’re NOT analyzing the goods and services in which the company deals. We couldn’t care less whether they even have goods or services at all. That’s not our problem.

We just want to own stocks going up, and not own, or be outright short, the stocks that are going down.

That’s it. That’s the goal. Nothing else matters here.

So in the spirit of the times, we’re publicly releasing our Freshly Squeezed List, which covers the most vulnerable candidates who are ripe for only the most epic of squeezes.

The higher the short interest, the more shares that need to be purchased, whether voluntarily or forcefully (in the case of margin clerks in short squeezes). 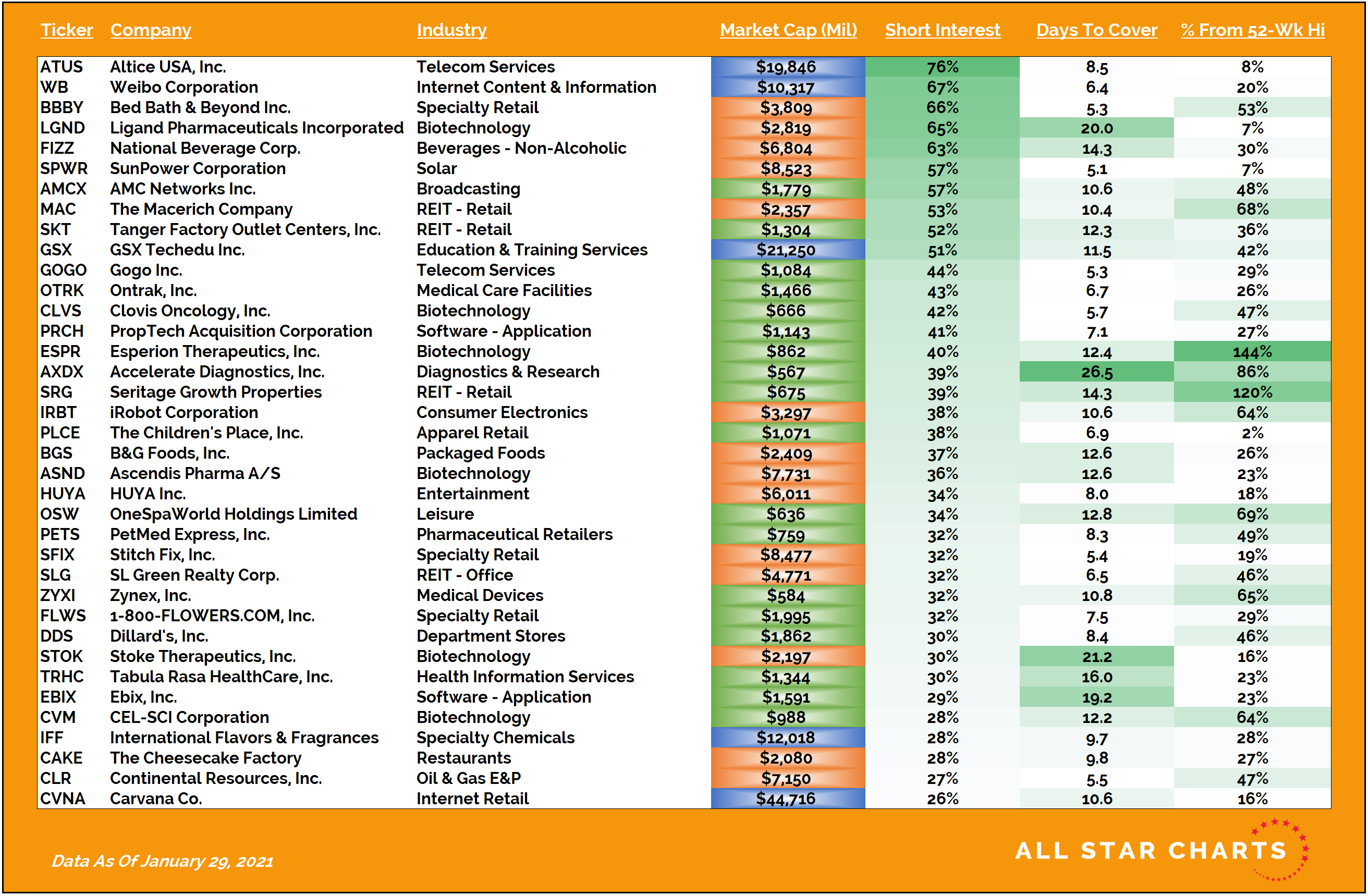 So this list is great for people who are short these stocks to be aware of their vulnerability. It’s also a great list for traders looking to own names that are getting squeezed.

This is the market environment we’re in. If you don’t like it, you can take your ball and go home. You have that right. You can invest in U.S. Treasury Bonds, or gold coins, or tulips or whatever it is your prefer. Be my guest.

For us, we’re fully aware that our readers are traders and investors of all shapes and sizes, timeframes and risk tolerances. But I think there’s something here for everyone, whether you’re a 50 year veteran or just opened your first robinhood account.

One name I really like is this First Majestic Silver. Here’s the chart from Toronto:

If this one is above all those former highs from the past decade, how do we not own it? Short squeeze or not, this is setting up for a classic base breakout.  Now throw in the catalyst of a quarter of the float being short a tiny $4Billion stock? We can see this double and it wouldn’t surprise me one bit.

In fact, I would actually be more surprised if it didn’t double! How about that?

You can dig into the rest of our favorite trade ideas here.

The Funniest Part About This Week

PS – I’m only kidding about the CFA. I have a lot of friends who earned their charter and I have a ton of respect for them. I’ve even been invited to speak at several CFA Chapters around the world. So I hope you can take a joke. In fact, I’ll take it one step further and admit that if I had to do it over again, I’d have gotten both the CFA and the CMT. I personally think that’s the move. So even though the CMT is all we need for public markets, the CFA would have been helpful in running my own business as well as in analyzing private investments that I also participate in. So that’s my 2 cents about that. Kids if you’re reading this, go get both. Don’t be lazy.

Ping me if you have any questions about it.