We’ve been waiting patiently for Energy to make its move. During January and early February the stock market was rocking and rolling but the Energy space was lagging. We said on February 2nd that it was time for Energy to step up to the plate. Its components’ huge market caps have a heavy weighting in the S&P500. So if the market overall was going higher, it needed some participation out of these Energy names (Exxon, Chevron, Conoco, etc).

Take a look at the recent breakout to new highs in the Energy Select SPDR ETF ($XLE). It appears as though a retest of the 2011 highs near 80 is now in the cards. More importantly, the relative strength in Energy compared to the overall market is finally breaking out to the upside. Other than a couple of quick counter-trend rallies, this sector has been underperforming the overall market for almost two years. No longer the case: 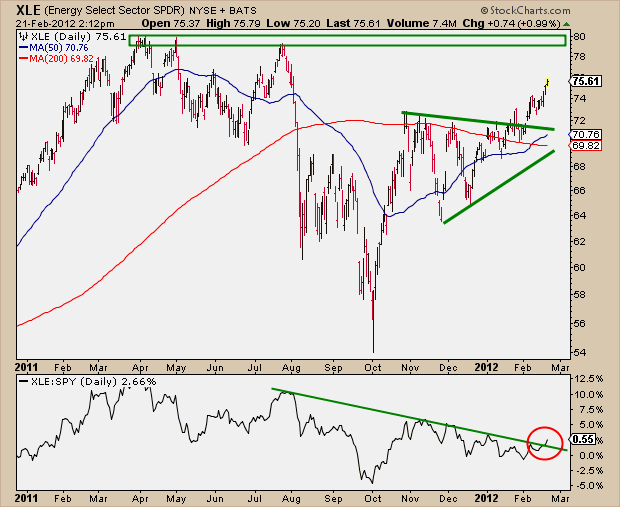 Now take a look at the United States Oil Fund ($USO). I don’t think it’s a coincidence that we are seeing a breakout here at the same time that the energy sector is finally showing signs of life. Throughout the Fall, $USO was having trouble just under the $40 dollar level as we can see with the red arrows. Now that we have broken out with a gap higher this morning, any retests of that level should serve as support in the future. 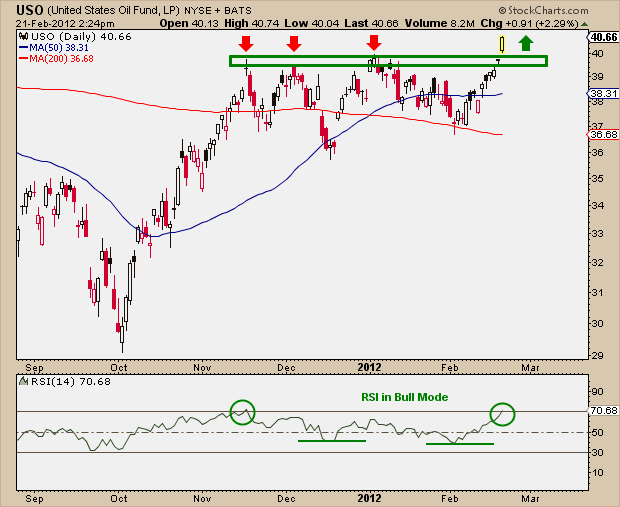 I would look for a breakdown back below $40 in $USO as a heads up that something could be wrong in the energy space and, as a result, the market overall. As far as $XLE is concerned, I would not expect breakouts above $80 without at least some consolidation, either through time or through price. But I think the recent action and rotation is very constructive.