One of the scariest looking charts in the world today has to be Silver. The other popular precious metal, Gold, is looking pretty terrible itself, as we mentioned on Wednesday. But it doesn’t get worse than Silver. I first brought up this bearish development a month ago, but since then the scenario has actually worsened. Let’s get right into it.

Here is a weekly bar chart of Silver going back to the rally that got going towards the end of 2010 that took silver close to $50/oz. There are a few things that I want to point out here. First of all, notice how many times Silver has tested this support just below $19. This area is key because not only was this former resistance in 2010 but it also represents the 161.8% Fibonacci extension from the early 2012 counter trend rally, which was the biggest one before the eventual breakdown last year: 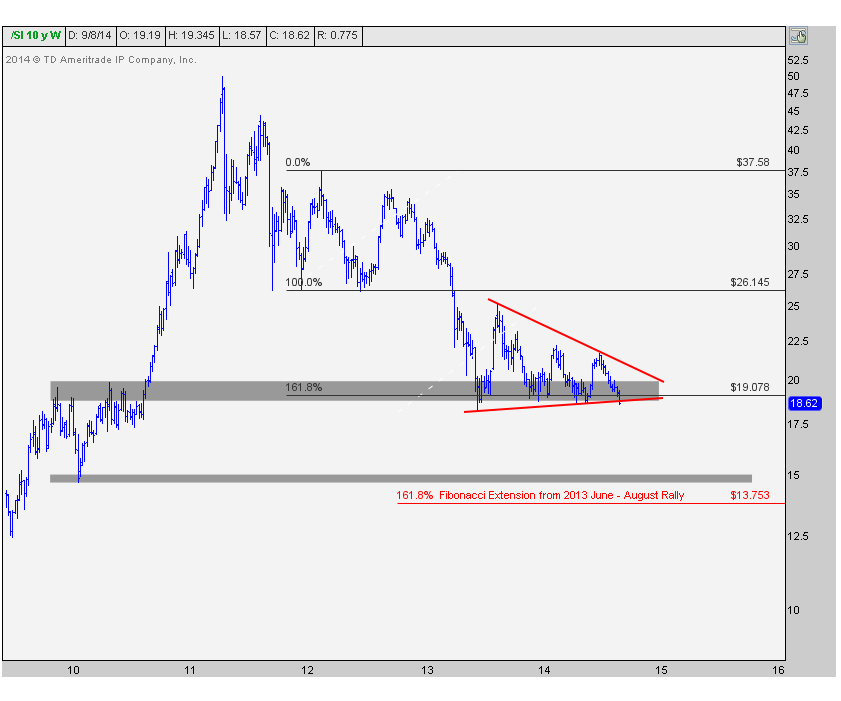 The more times that a level is tested, the higher the likelihood that it is going to break. After this many tests of support, my experience tells me that a big break is likely coming soon. To come up with a downside target we want to take the 161.8% Fibonacci extension from the size of the recent consolidation. In this case, the base of the descending triangle from the 2013 June-August rally gives us a target of $13.75. There is also some support around $14.80 from prior support in early 2010 as well as a measured move target based on the size of the last two bounces in Silver that took place throughout 2014.

We want to see new weekly closes in this market below all prior weekly closes in order to confirm this breakdown. So far the closing lows during this consolidation are 18.85 from July 2013 and $18.80 this May. We want to be short, but only below those levels. I believe there is enough downside here to justify the risk, as far as our risk tolerance and time horizon is concerned. For a catalyst, sentiment was much more bearish on the first 3 tests of support than there is now. Crashes don’t come when everyone expects them. In this case, fewer market participants expect one. We love that.