The relative strength we’ve seen in the Dow Jones Transportation Average has been awfully impressive. And not just recently, but actually going back to the year 2000. While the Dow Jones Industrial Average is up less than 30% from those early 2000 lows, the Trannies are up over 120% during the same time period.

Here is a ratio chart of the Transports vs Industrials going back 12 years: 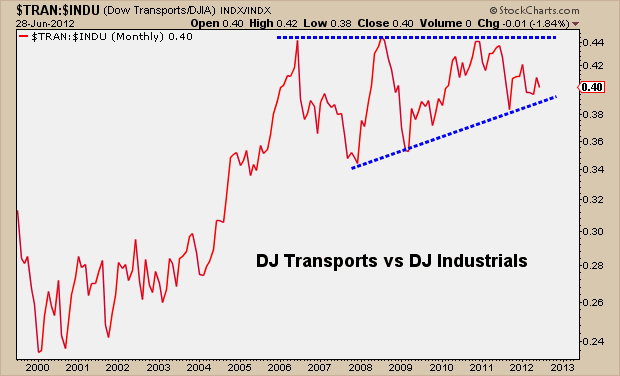 On Thursday, as US Equities were staging a comeback after lunch, the Dow Transports were the first ones to turn positive. Then came the mid-caps in the green while the rest of the major averages stayed red into the close.

Here is a long-term chart of the Dow Transports bumping up against key resistance. 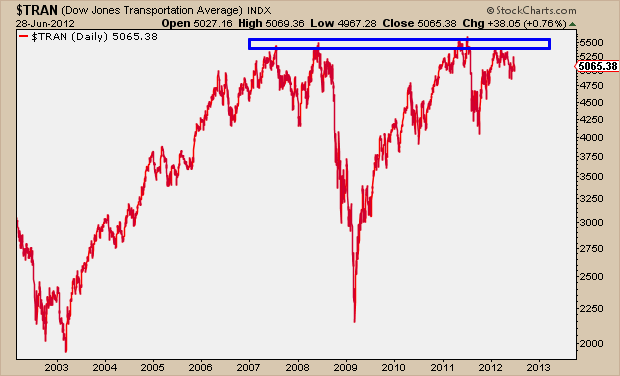 It looks to me like 5400-5500 is major major resistance for the Dow Jones Transportation Average. We’ve seen four serious tests of this supply zone since 2007 and well on our way for number five. I think it’s inevitable for this resistance to be taken out. And once the ceiling is penetrated, this level should serve as support in the future.

Now without getting ahead of ourselves, let’s do some math. When a chart looks anything like an inverse head & shoulders, I can’t help myself but add up the numbers for a potential target. So we take the distance from the head to the neckline and add it to the neckline for our upside target. In this case 5500 neckline minus 2150 head = 3350 plus the 5500 neckline give us a measured move up to 8850 for the Dow Jones Transportation Average.

So yea, I think the transports are looking beefy!