Here we are almost half way done with the month of November and most of the major U.S. Stock Market averages have gone no where this year. The more popular indexes, S&P500 and Dow Jones Industrial Average, are both flat for 2015. The Smaller-cap indexes Russell2000, Mid-cap 400 and Russell Micro-cap indexes are all basically flat as well down less than 1-2% this year. The ones that stand out are the Nasdaq100 up 10% this year and the Dow Jones Transportation Average, down 10% in 2015. We’ll call that a wash. Markets are flat.

A couple of months back I laid out 3 possible scenarios for the S&P500 going into year end and into the first quarter. A retest of the August lows was what I figured would be the highest probability outcome. From there, it became more difficult to judge: we either keep retesting those lows and ultimately break, or consolidate and eventually break out to new all-time highs. This is still in question. So as usual, we want to take the weight-of-the-evidence to come up with a game plan.

First of all, as strong as the Nasdaq has been since the lows and recently hitting new highs, we are literally right at the all-time highs from March 2000. The question I’ve been asking (because I do not know the answer), is whether or not this is a “new” Nasdaq impossible to compare to 2000? I posed this question during my panel at the Finance Festival this weekend, and I still do not have an answer. I’m going to go with math and ask: OK, looking all over the world at all asset classes, stocks, bonds, commodities and currencies – is buying the Nasdaq100 right here at all-time highs, where it fell 80% last time we were here, the best risk vs reward opportunity? Stated this way, my answer is an easy no. 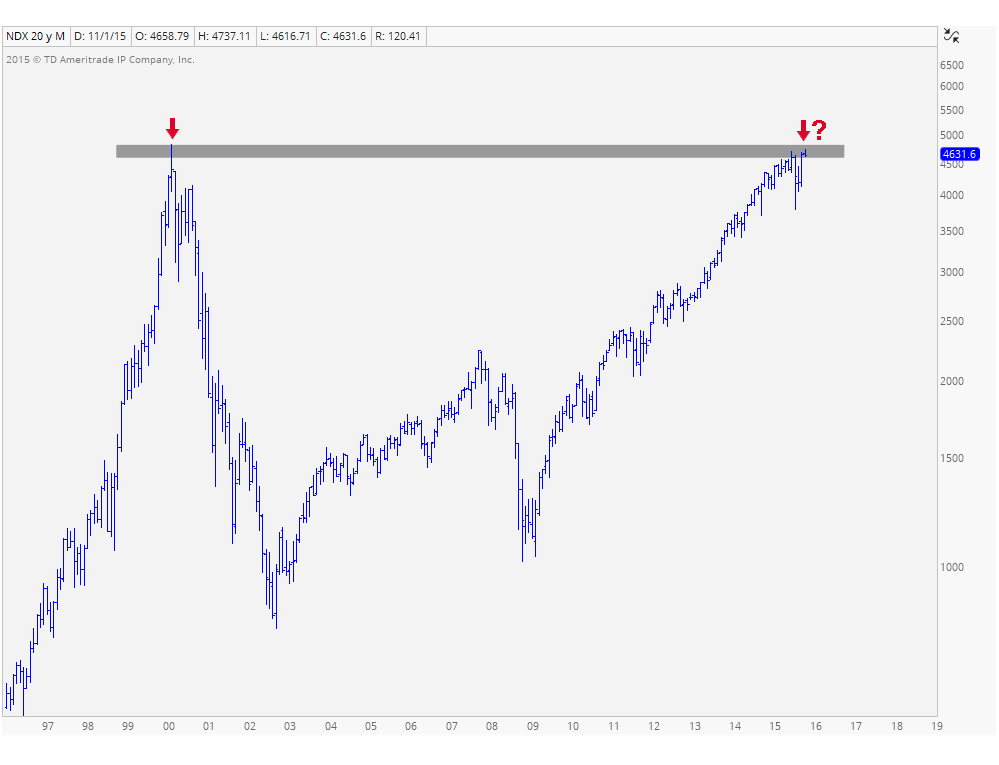 Looking more short-term I will say that the fact that S&Ps were able to rally back above 2040 to get back into this range since the first quarter is very impressive. That breakdown in August could have been disastrous, but now we’re back into it. This doesn’t necessarily argue for an uptrend, but for now, it takes downtrend out of the equation. Here we are near a flat 200 day moving average which screams: lack of trend. So it makes sense. As I said since mid-March, we want to be long if we can breakout above this range and get short if we break below. This worked well in August and we will continue to look for a new resolution out of this range before getting aggressive again in any direction: 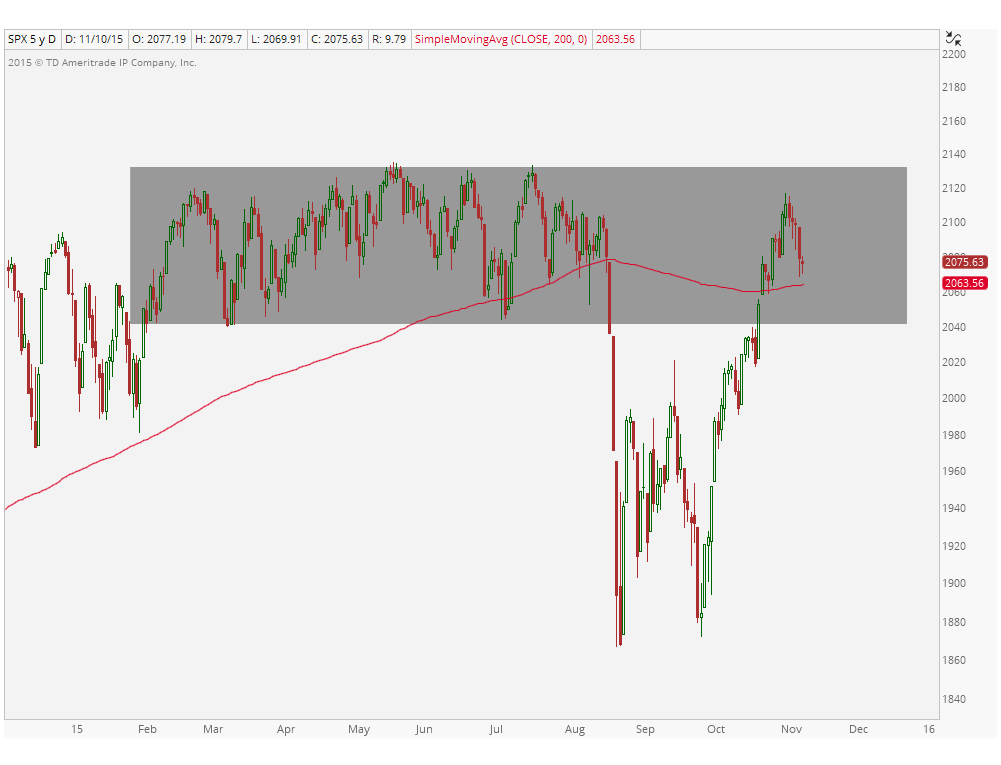 Back in August, when we broke to the downside of this big range in S&Ps, I came up with some scenarios that would make me lean more bullish and be less pessimistic. I always think it’s important to make a counter-argument. There were 2 things I wanted to see, a rally that holds above 2040 in the S&P500 and the Dollar/Yen above 122. This level goes back to the market top in 2007 as we can see here: 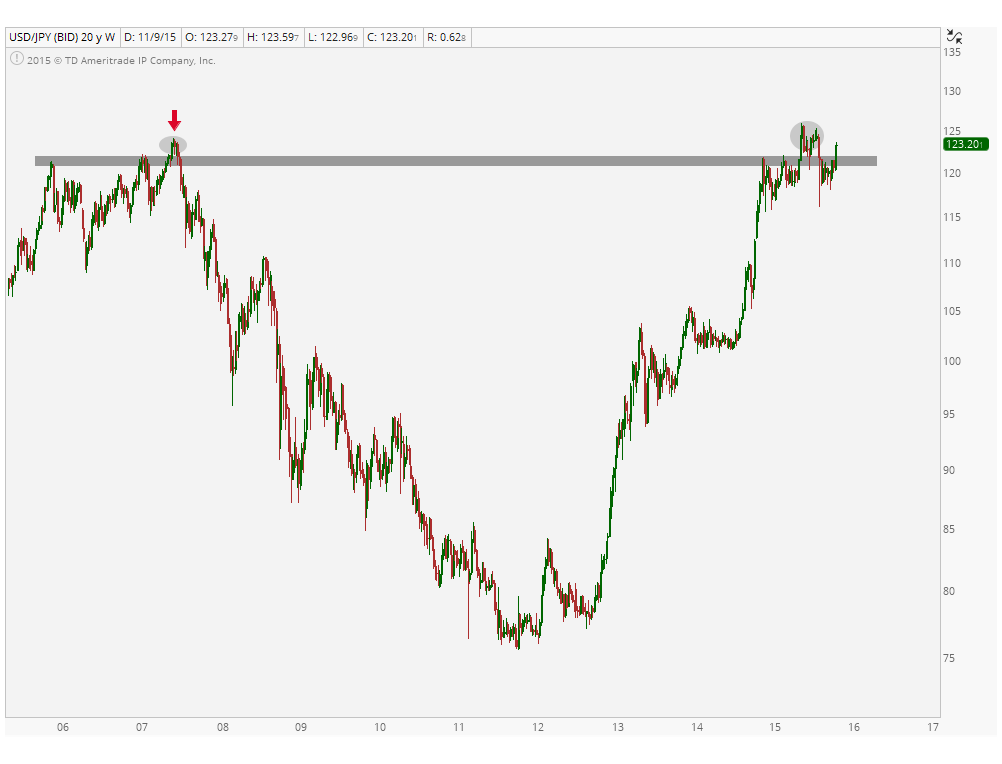 And here is the short-term look. I would argue that if the S&P500 can stay above 2040 and USD/JPY remains above 122, it is hard to be bearish towards the U.S. Stock Market as a whole: 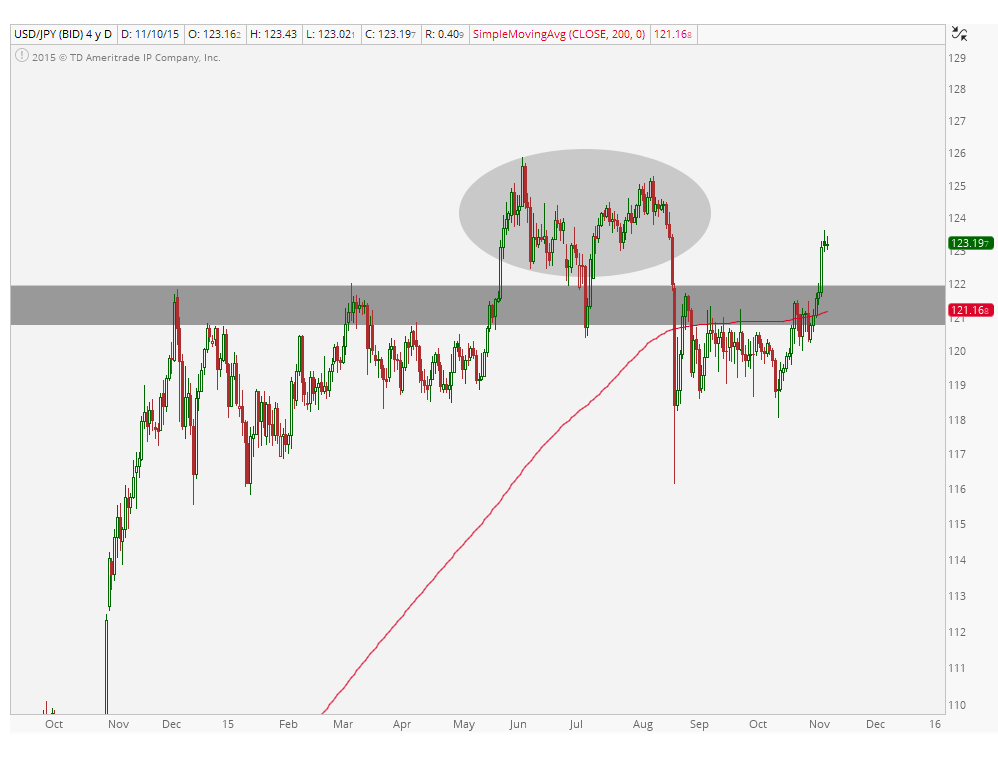 There have been plenty of opportunists over the last several months, both long and short. I wanted to stay away in since March, then hated stocks in August, but the weight-of-the-evidence suggested getting aggressively long in late September. I think we will continue to see tactical opportunities in U.S. Stocks, but where we stand today, this minute, I think the best places to be (long and short) are outside of the averages. I think you need to pick and choose between stocks and sectors. Notice the difference in returns between the Nasdaq100 and DJ Transportation Average this year. I would expect similar disparities between sectors and stocks going into the end of 2015 and early in the first quarter.

A wise man once told me, “JC, if you trade the averages, you get average returns”. I think where we sit today, this is even better advice than usual.

Click Here to receive weekly updates on all sectors and sub-sectors across the U.S. Stock Market including Energy, Financials, Technology and Healthcare. This package includes over 50 charts annotated with commentary.