The US Dollar has been trapped in a sideways trading range for the trailing 12 months now. The primary trend is lower, and we continue to see near-term weakness from the DXY Index as well as most USD crosses.

Commodity-centric currencies have been some of the best performers versus the Dollar since early last year, although most of them have been correcting since Q1 or Q2, giving back a good deal of their earlier gains.

So, will we see a resurgence back to those risk-on pairs, or will they keep sliding lower against the Dollar?

Today, we’re going to focus specifically on the currencies of some of the largest oil-producing countries in the world.

This should give us information not just about currency markets, but also commodities and risk assets in general.

Let’s talk about it.

An easy way to aggregate and measure their performance as a group is by analyzing our Petrocurrency Index. It includes currencies like the Canadian Dollar $CAD, the Russian Ruble $RUB, and the Brazilian Real $BRL, among others.

Here it is, overlaid with Crude Oil Futures: 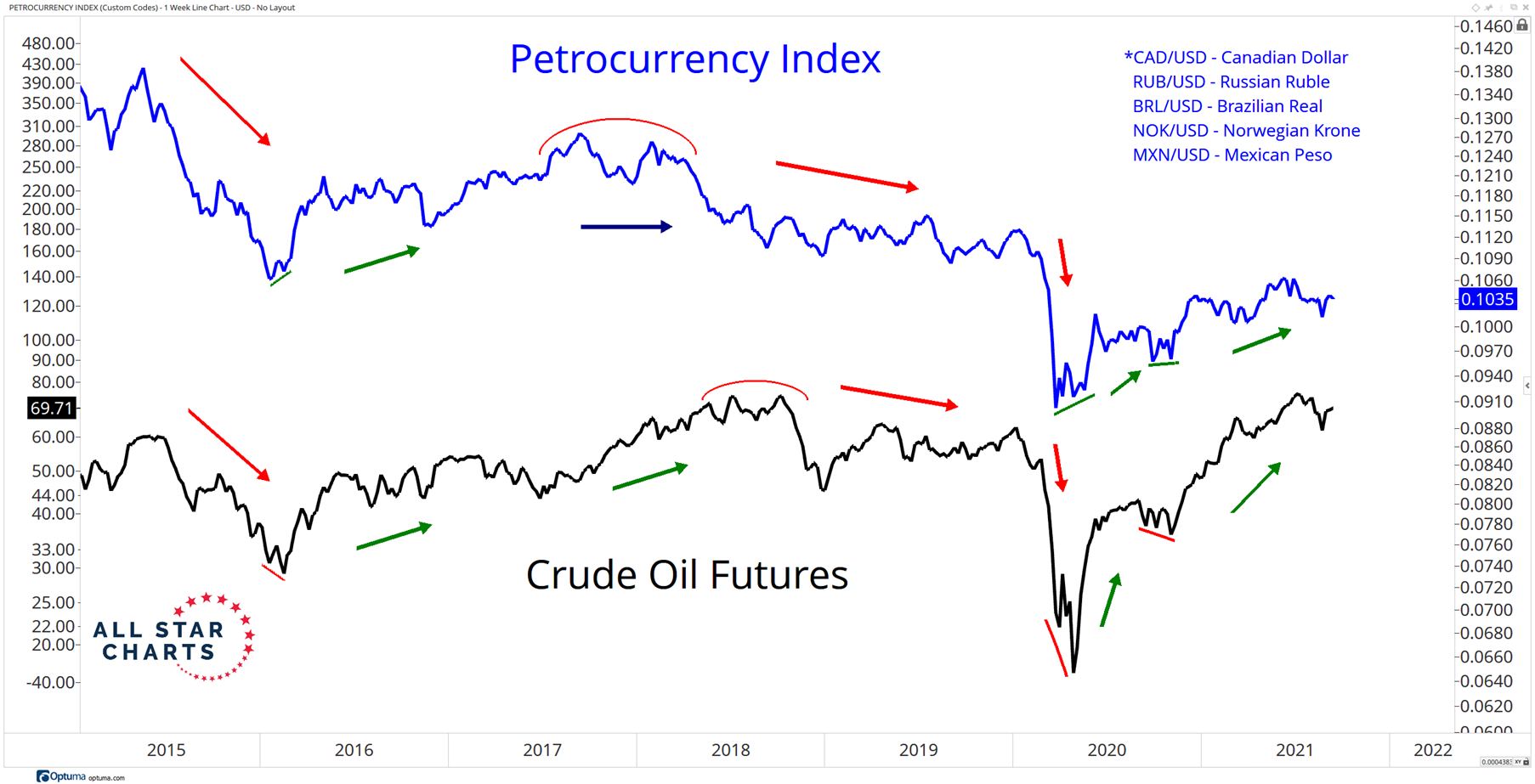 They look pretty damn similar, don’t they? As with anything, the demand for these oil-centric currencies rises along with the demand for crude itself. If you want to buy a countries’ goods, you usually need to buy their currency first. Moving on…

It may be difficult to see in the chart, but crude oil has been chopping sideways beneath overhead supply at its 2018 highs for months now. So, it should be no surprise that many of the currencies in our index have been doing the same.

After such a nice run from below zero last year to its peak of about 76 in July, some digestion here makes plenty of sense. It’s completely normal.

At the same time, if risk assets are going to get moving again, we’d expect crude to participate. And there’s no evidence of it breaking back above those summer highs any time soon.

But perhaps we can gather some clues from our Petrocurrency Index and its components.

As you can see in the chart, this index has already given us plenty of leading signals for oil in the form of bullish divergences in the past.

So, new highs from our Petrocurrency Index would definitely bode well for higher crude oil prices.

But, before that happens, we need to see the individual components make some moves. Let’s take a look at some now.

First up is a significant player in the oil game, the Russian Ruble. Here’s the USD/RUB cross:

This one has been relentlessly banging against support around 72.50 since late last year.

We know the more times a level is tested, the higher the likelihood it breaks. If and when that 72.50 level is finally violated, we want to be paying attention to crude oil in anticipation of a move higher.

Now let’s look at one of the major commodity crosses, USD/CAD:

Not only is USD looking increasingly vulnerable against many emerging market currencies, but we’re also seeing weakness against G-10 pairs. Just look at this massive topping formation, and think about the implications of it executing to the downside.

Is that nasty failed move from a few weeks ago going to kick off a fresh leg lower?

We’d expect this kind of action to occur in an environment where crude oil is moving higher. But, again, we still need to see it before we want to take any action.

If USD/CAD and USD/RUB break to the downside, it wouldn’t just be bullish for oil. It would also support the stock market and commodities in general. These are risk-on currencies, so seeing them reassert some strength would suggest a potential turnaround in risk appetite.

But, for now, this is just something to keep an eye on.

The main takeaway is that we continue to see more of the same for risk assets: mixed signals and messy price action. Until we see decisive moves in one direction or another, expect more chop.

As always, we’ll continue to monitor the data that comes in each day to gauge the currency market’s overall direction. And we’ll be right here talking about it every week!

Premium Members can check out this week’s Currency Report below.