The bond market is the biggest market in the world. Hello?

It’s easy to get caught up in the daily noise about some crypto currency or a biotech stock. But these are tiny tiny tiny itsy bitsy little markets. The bond market is a real market, with actual money in it and driven by the largest financial institutions and governments all over the world. If you want real information, the bond market is where to get it.

My friend Larry McDonald, a former Lehman Brothers Bond Trader, was on a recent podcast episode of Technical Analysis Radio talking about exactly this. I encourage you to give it a listen, it’s not long.

Today we’re taking a look at credit spreads. Why? Because we’re always watching them. In November when some people were freaking out about the sell-off in bonds, I tried to explain that it wasn’t about the bonds themselves, but the widening or narrowing of spreads that we were most interested in.

An easy way to view this is by taking a ratio of the Junk Bonds Fund $HYG and the US Treasury Bonds Fund $TLT. When the ratio is falling, that means credit spreads are widening. When the ratio is rising, spreads are narrowing, which is evidence of risk appetite from the largest financial institutions in the world, not risk aversion. Stocks do well when institutions are buying them 😉

Notice the important bottoms in 2009, 2011, and 2016. Narrowing credit spreads are consistent with rising stock markets. Widening of spreads, evidence of risk aversion, is a warning of deterioration in the bond market. Look at the divergence in April 2011, right before stocks corrected. Look at the severe divergence heading into 2015 right before stocks experienced a correction: 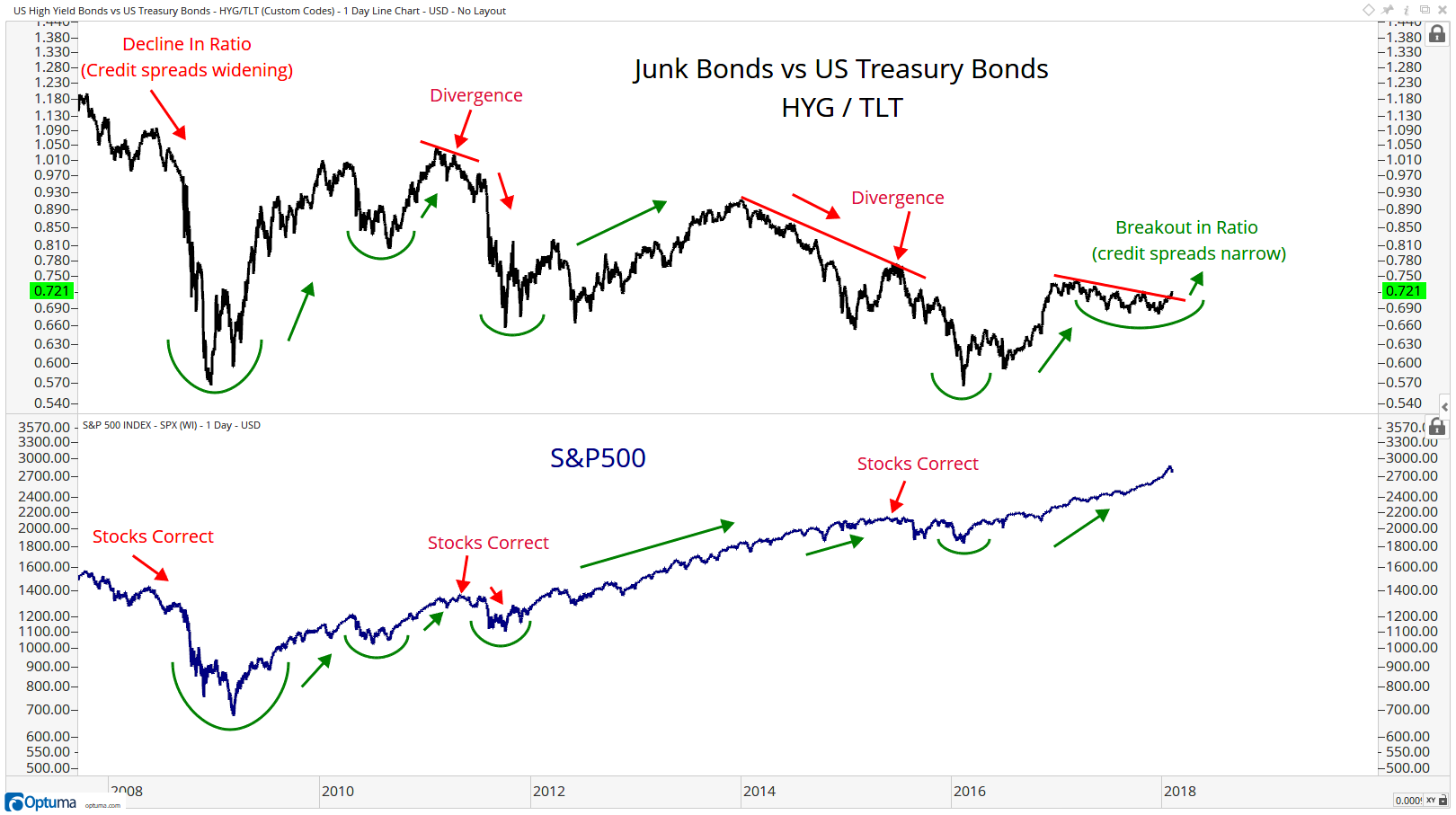 At this point, we’re not seeing new lows in this ratio, meaning spreads are not widening. We are actually seeing a breakout in this ratio, indicating to us there is little stress in the bond market. This is the sort of environment where we want to be buying weakness in stocks, not selling strength.

Also, some people would argue that a better way to express this ratio is by using the $IEF instead of $TLT, representing 7-10 year bonds rather than 20+ year. I prefer to view the most liquid and $TLT is exponentially more liquid than $IEF. But if you want to split hairs here, the $HYG / $IEF ratio is already making 30-month highs and looks even better than this chart above. So everything seems pretty consistent here and giving similar messages.

In a recent note, technician Ari Wald of Oppenheimer, also a former guest on Technical Analysis Radio brings up a similar argument to what I’m making:

Credit spreads also held firm during last week’s pullback, indicating a lack of underlying market stress and a likely continuation of the equity cycle, by our analysis. This is a glaring difference vs. 2015 when credit spreads had widened considerably into that year’s peak. In general, we’ve found that the S&P 500 is less vulnerable to bouts of downside volatility when US credit spreads are narrowing”

From a risk management standpoint, I’ve provided an extensive list of stock trade ideas with well-defined and very specific risk vs reward propositions. “If you trade the averages, you get average returns”, is how I learned it. But it’s important to be aware of the direction of the overall market, so we know in which way we would rather err. In addition to individual risk levels, I think from a more macro perspective, watching the bond market is the responsible thing to do. We will continue to monitor the situation as the data comes in.

Not already a member of Allstarcharts? Curious about how the Bond Market Helps us? Start a risk Free trial here.