Greg Harmon and I have been all over the Stocktwits Stream this week discussing Copper, and more specifically $JJC. We’ve been counting Elliot Waves, describing different Japanese Candlesticks for specific daily and weekly candles, and Tweeting about the action surrounding some of the moving averages that have been coming into play as of late. 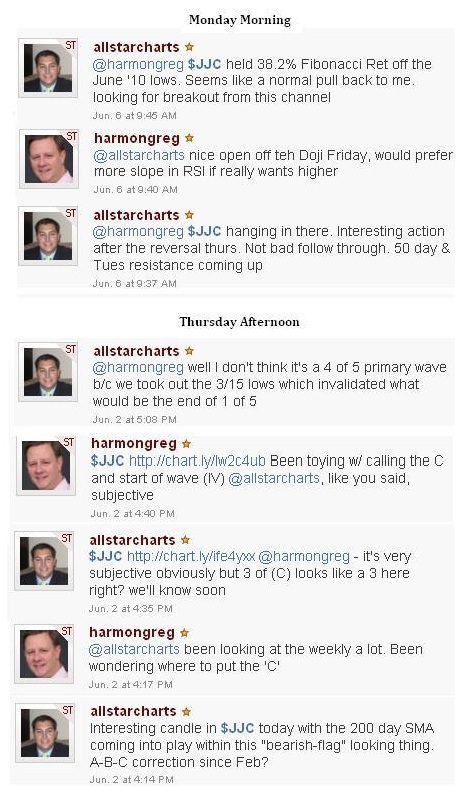 Speaking for myself, I am mostly interested in Copper, not because I have a huge position, but because I use it as a bellwether for the global economy. It is one of my favorite leading indicators. Here is the chart that we’ve been discussing. Don’t worry so much about the Elliott Waves, I mostly like to use them when it’s a more obvious count. In this case I am under the impression that the June ’10 to Feb ’11 move was a primary wave in the direction of the underlying trend and this recent sell-off is a healthy, normal, A-B-C type correction. Elliott Wave counts are extremely subjective, but if I’m right, then we should be seeing the beginning of the next wave in the direction of the underlying uptrend. Again, Elliott is probably the most subjective form of analysis that I know of, so as long as you keep in mind that there is no right or wrong answer and just another tool in the tool belt, you’ll be alright. 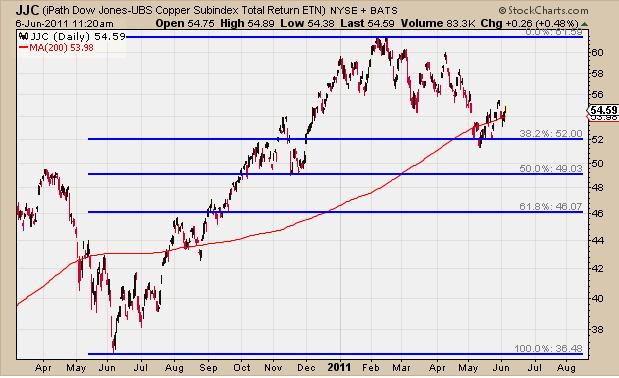 Looking at the chart of $JJC above, support at the 200 day moving average has come into play here along with the 38.2% Fibonacci Retracement. The magnitude of this retracement is typical of a correction like this. Let’s see how it plays out because the rest of the stock market should follow. A breakout above $55.50 would confirm the above thesis. This would take out the recent highs, take out the 50 day Moving average, and get $JJC out of this declining trend channel in place since February. $JJC is definitely one to watch, whether you have a position or not. From a risk management perspective, I want to watch the May lows just above $51. If that gets taken out, I would expect some additional selling across the board.

If you haven’t realized this by now, @harmongreg is a MUST FOLLOW on @Stocktwits. Make sure he’s on your watch list.