As always, thanks to everyone for participating in this week’s Mystery Chart. Almost all respondents were buyers. A few also mentioned they would only want to be long against potential support at the prior lows which is likely the same approach we’d be taking with a long-term timeframe.

Something we’ve hit on a lot lately which was also a common theme among the Technicians that presented at Chart Summit 2020 last weekend, is that the relative trends that have been in place have more or less remained in place throughout the recent volatility. Check out this week’s podcast episode where JC and I discuss this and other key themes from the conference.

Many of these relative trends recently accelerated in the direction of their current trajectory. One example is the Nasdaq vs the broader market which we covered in last week’s Mystery Chart Reveal post. But this certainly isn’t the case with Chinese Equities relative to US Equities which have been in a structural downtrend for over a decade now.

As you can see in this weekly line chart of the Shanghai Composite relative to the S&P 500 dating back about 25 years, the ratio tested key prior lows near 0.80-0.85 in February, the same week the S&P 500 peaked, and has reversed higher since.

Prices put in a slight failed breakdown when they undercut their 2018-2019 lows (red dotted line) before ripping higher and going on to register their first higher high and overbought momentum reading in several years. Also notice that not only has price already confirmed its bullish momentum divergence but this was the first time this critical support level was tested without momentum hitting oversold.

These are all positives and support the idea that this is the beginning of a bearish to bullish trend reversal. With that said, carving out a bottom following a decade-plus structural downtrend like this is a process, not an event, so expect some consolidation and sideways action in the near term.

This ratio chart is important because it helps put China’s recent strength in perspective. China has actually been steadily outperforming the S&P since US stocks broke out during Q4 of last year.

As you can see in the performance chart above, China has outpaced the US by nearly 14% over the trailing 6-months.

If not for these charts, one might presume China would be under immense pressure due to the Covid-19 pandemic which originally broke out in their country, but this hasn’t been the case at all. In fact, the Shanghai Composite has been the best performer of all the Global Indexes we track as it is the only one (out of 45) to not hit a 20% drawdown during the recent selloff. We wrote a post about this a little over a week ago which you can read here.

We shared a table of all the Global Indexes in that post. Similar to the one below of our International ETF watchlist, it not only showed outperformance from China but more importantly, pervasive weakness from Equity Markets around the world. 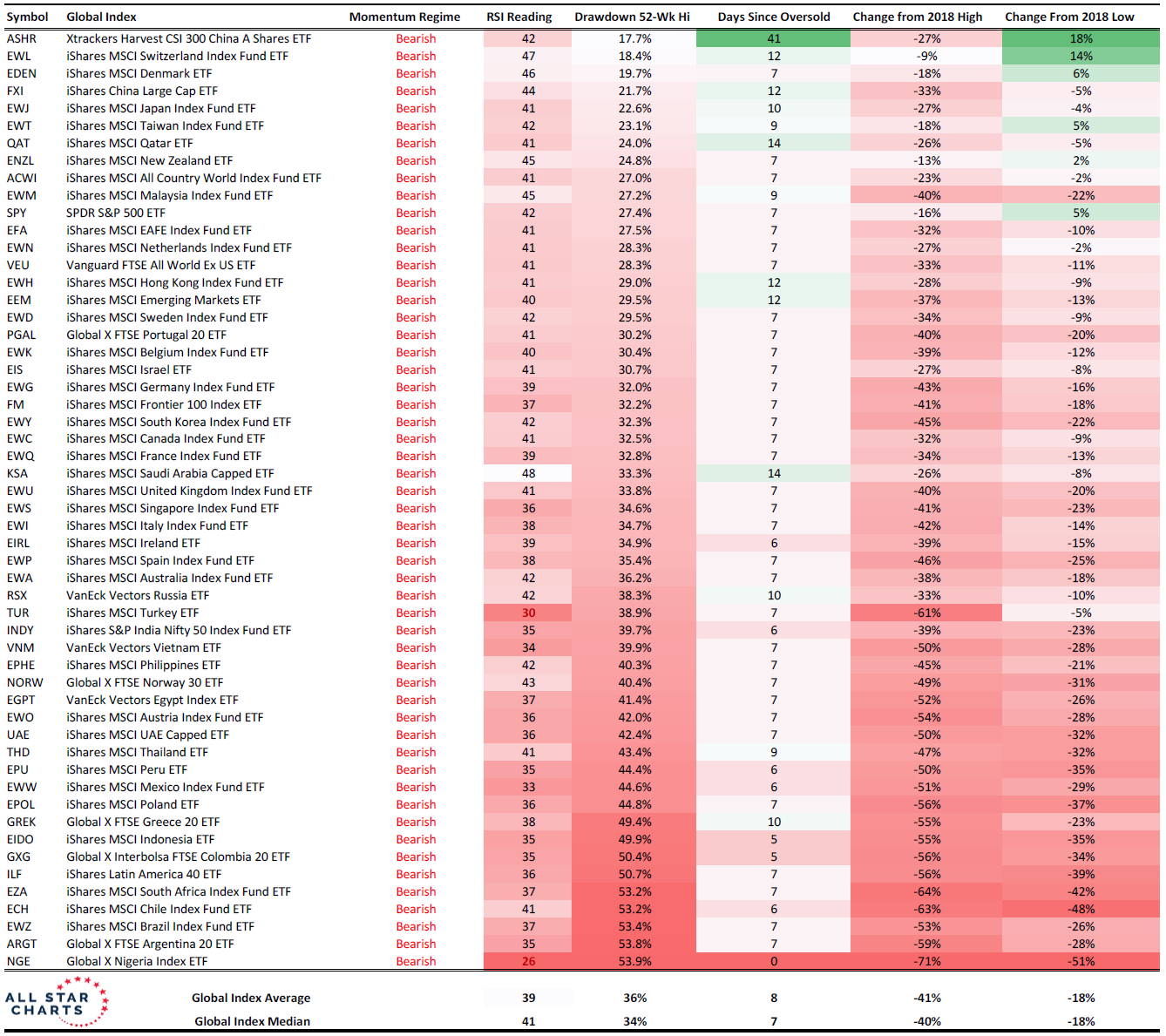 Similar to our table of Global Indexes, you will notice that every single ETF is currently in a bearish momentum regime… even China.

The bottom line is regardless of relative strength when breadth is this weak around the globe, it’s simply not an environment we want to be buying stocks in. What we do want to do is add China and the A-shares ETF (ASHR) to our list of leaders that we’ll be looking to for long opportunities once we believe stocks have made a tradeable low.

For now, we want to be patient and see if the last few days of action in Global Equities turns out to be a continuation pattern in which stocks push higher or merely a dead-cat bounce whereby we roll over and test the recent lows. If the former plays out, then ASHR is likely to lead but that thesis only remains valid if prices are above 25.50 and China is continuing to flex its relative strength versus the rest of the world.

We’ll be sure to follow up on this once more data comes in. In the meantime, let us know what you think.