It’s been a month since the first Chart Summit India on April 14, 2020. I’ve been watching the videos and learning a lot, and encouraging everyone to do so.

We had 20 brilliant Technical Analysts get together online to raise funds to help fight COVID-19. Thousands of people logged in live, and thousands more came to watch the videos later. I have to say that the Technical Analyst community online has some of the nicest people on the internet. They shared valuable knowledge for FREE. This is stuff that’s made them money, and has taken them years to learn.

To start the day we had Peter L Brandt, a legendary commodity trader. Peter lives in Arizona, and trades global markets. He’s written books, runs Factor LLC, and has traded on classical chart patters in 6 decades. When he talks, I listen.

Peter is active on twitter and had posted an aggressively bearish target for Nifty. So this presentation was an excellent opportunity to understand his thought process behind this chart. 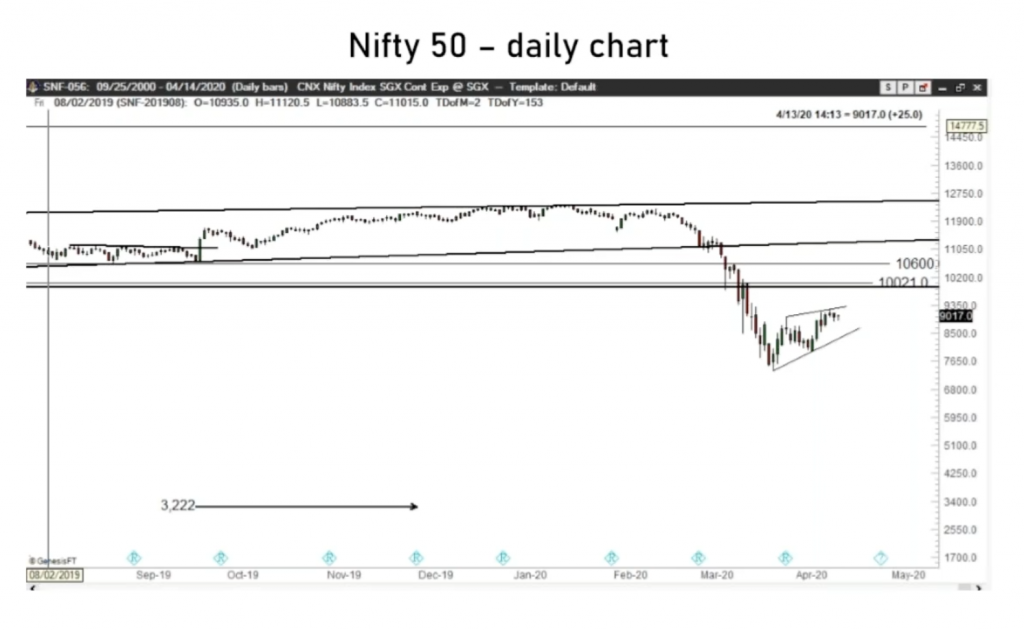 Now this is the important bit: this isn’t a straight line down, and there are pullbacks along the way. Even though there is this aggressively bearish view with a target of 3222, it doesn’t HAVE to get there. It’s something to keep in mind as you observe the chart. Starting with the most dominant pattern on the chart, and then looking deeper for tradable classical chart patterns.

Another thing to be conscious of is that the US Fed has decided to “throw not just the kitchen sink, but the whole kitchen” at the market to buy assets. This is clearly visible on the chart. One doesn’t want to fight the Fed, and the Fed will want to run into bears and fight them. So unlike most of the other speakers, Peter feels the Nifty can rally up to 10,000-10,600 and then head back down.

Peter also talked about USD/INR and shared a very strong view that the Rupee will weaken further with a target of 79.25. 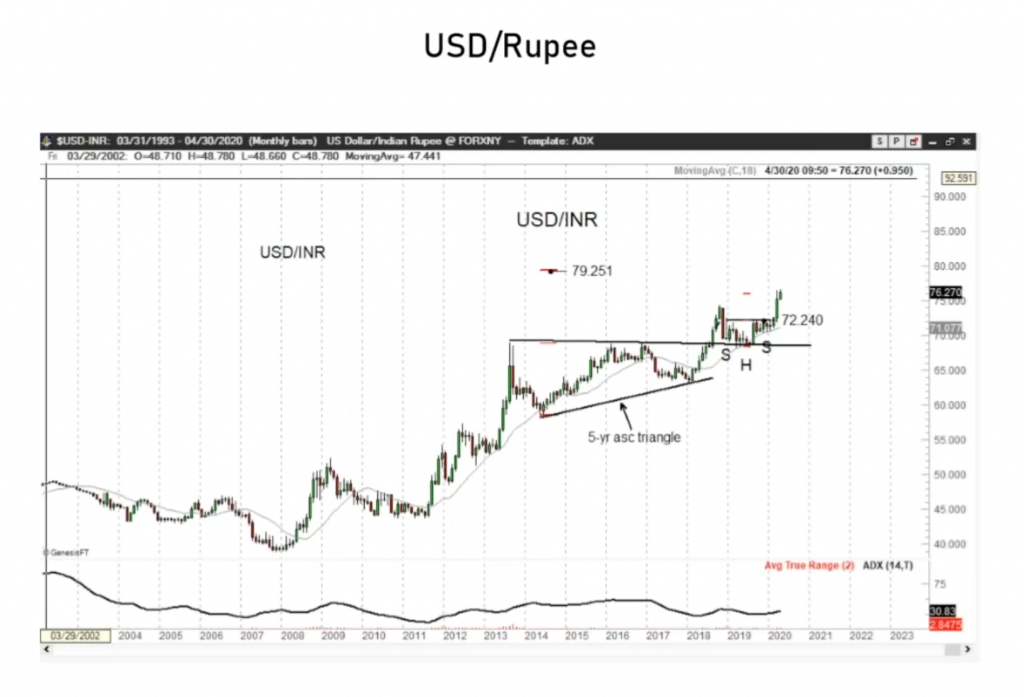 Perhaps the most valuable experience Peter shared was something that corrects a misconception among those who don’t understand Technical Analysis. It was an answer to a question by Tom Bruni: What changes do you make, if any, to your analysis or trading tactics when analysing a younger market like India, vs. a mature market like in the US. Peter liked that question and shared that he likes trading younger markets like India more than the mature market in the US:

“We’ve seen that in the Nifty in terms of big broad multi-year patterns. They’ve been extremely reliable. We’ve had clean breakouts, we generally have nice retests. We get a lot of nice trading opportunities in a market like India. I like the Nifty. It’s actually one of my favourite markets to trade when I have a good signal.”

To end the day we had Subhadip Nandy of Quant Gym.  Nandy is an independent quantitative derivates trader. At one point he was the research head of one of the biggest prop firms in India. He’s affectionately knows as “Dada” (Bengali for elder brother) and watched the entire day of videos before presenting as the last speaker of the day, ON HIS BIRTHDAY. Dada, if you’re reading this, it meant a lot that you watched all the speakers and joined us to share your knowledge.

Nandy presented a Scalping strategy that requires discipline, the ability to take quick decisions without hesitation and emotion, and relies only on Price and Technical Analysis. We’re not concerned with Fundamentals or News. Each trade lasts only a few MINUTES, and requires strict risk management.

The basic rule is based on the VWAP indicator. We buy above VWAP and sell below VWAP. The second rule is based on RSI(11) (not 14). RSI should show the same congestion pattern shown by price.

This is a different way of looking at the RSI indicator, and many speakers that day spoke about the variety of ways the same indicator is used by different analysts.

Nandy observed that Price generally congests before a strong move. Think of a coil spring that’s been compressed and then the tension is released. He watches the 1min futures chart of Nifty for a breakout/breakdown from a triangle. RSI needs to confirm and often precede the breakout/breakdown, otherwise he considers it a false move in the price. He watches the Futures chart, but trades the At-the-Money Option.

The trade entry is based on a breakout or breakdown from a triangle, but the exit is based on Risk Management. Strict disciple is required here. The Stop-loss is the previous swing high/low, whereas the target is twice the amount of risk you trade. Essentially: (CMP – Stop-Loss) = (Target – CMP) / 2. 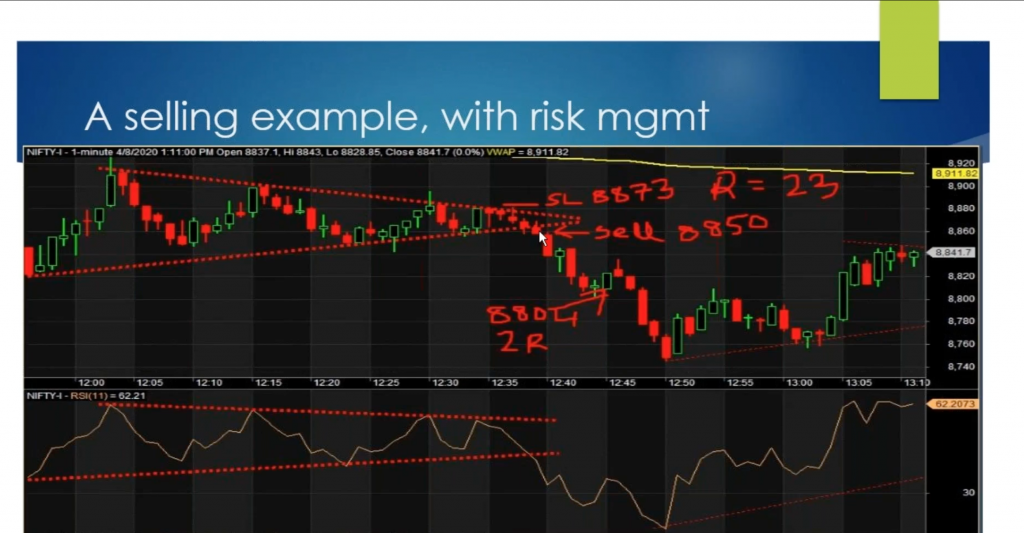 This system looks very simple, and it is. The trading decisions must be made very quickly, so simplicity works! The strategy has about a 55% rate of success, a win/loss ratio of ~1.7. So Nandy emphasises the importance of quickly looking forward to the next trade whenever you encounter a failed trade.

Nandy also emphasises that one must practice and back test one’s own ability to follow this strategy on ONE YEAR worth of old data. Then start small and increase your capital allocation in stages, just like you would while weight lifting at a gym.

Mita Mehta described her strategy of using “Modified Technical Analysis” combining trend analysis with Elliot Wave to have a mechanical trading system. It sounds more complicated than it is, and there lies the beauty, again. Mita trades only Wave 3 in long setups, and Wave C in short setups, to get only the most powerful moves. This way she also gets a 90% success rate in her trades.

Mita looks for Early entry, Small risk, less panic, and a timely exit. She wants to ride the full trend, and trades with momentum. Using 3rd wave and ‘c’ wave she is able to find clear direction, good momentum, good strength and less risk. The dream trade has a favourable risk reward ratio.

She explains her concepts of Testing and Touching and using Bollinger Bands to find the volatility she needs to profit from her trades. There are multiple examples of her trades in this video.

Rohit Mandhotra of Bloomberg has extensive experience trading Forex. He shared charts of USD vs. BRICS currencies and explained how he trades using Elliot Waves Theory.

Rohit went back 20 years in his charts and showed how he analysed currency charts through the dot com boom, the financial crisis, and more recently in 2017. He discussed the challenges of profiting from currency trades that have a carry cost, and where Elliot Wave helps him overcome this.

It was an honour to host the first Chart Summit India with such amazing speakers. It was a small contribution we could make to raise funds to help those who need it most at this time. We hope you take advantage of the generosity of the speakers and watch the videos. I promise you will learn a lot!

Also check out the event recaps from Bruni and Strazza which cover the remaining speakers’ presentations.

30-day risk-free trial. Or sign up for our “Free Chart of the Week” to receive more free research like this.

Thanks for reading and let us know if you have any questions.