One thing that often gets forgotten is that we don’t live in a vacuum. Life in the market is not just about absolute performance, but about how assets behave relative to their peers. The stock market isn’t the biggest game in town, it’s the bond market. But let’s not forget about metals either. When stocks are in bull markets, they’re not just going up as a group, they are also outperforming the alternatives.

Today we’re taking a look at stocks, not just on their own, but relative to the other assets. We know that on their own stocks are making new all-time highs. This is happening all over the world. Stocks in the U.S. aren’t up because of what’s happening in New York or Washington DC. Stocks in the U.S. are up because stocks all over the world are going up, both in developed and emerging markets, despite of what is happening in New York and Washington DC.

Some people have this misconception that stocks are in the later innings of this uptrend. I’ve been arguing, almost religiously, that they are probably much closer to the beginning of the bull market than near the end. So no, this is not the 9th year of a bull market, I think we’re probably early in the second year.

I wanted to share those posts with you to help put things in perspective. But today, I think it’s important to point out that although the S&P500 is up over 16% so far this year, it has done very little when compared with US Treasury Bonds and Gold. In fact, S&Ps have been in a massive range vs both of these asset classes all year. Until last month, of course.

In this chart you can see that in October the S&P500 was finally able to break out of this range it was stuck in vs Bonds and also the range it was in relative to Gold: 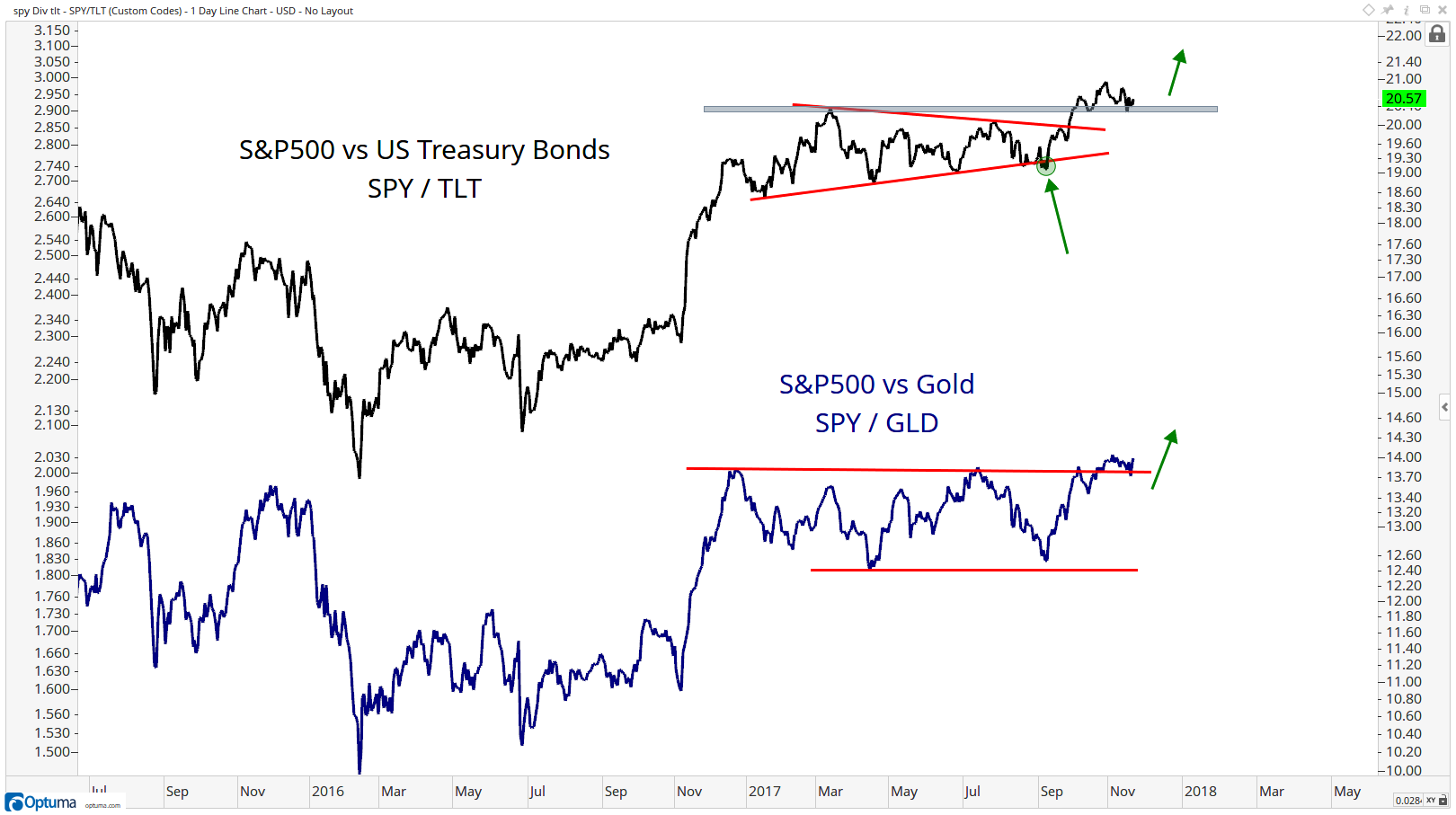 Notice how both of these upside resolutions were called into question last week as they were attempting to retest those important breakout levels. It appears that they have done so successfully and the path of least resistance is now higher.

So what does this mean? Well, to me it means that NO, this is not “a bubble” and NO, we’re not near the end of this rally. I would argue there is a much higher likelihood that we are a lot closer to the beginning. If these ratio charts remain above their former highs from the past year, it is impossible for me to be bearish of stocks and bullish of the alternatives.

Our strategy has been very simple: Buy stocks very aggressively and sell bonds and gold. I have not been shy about expressing these views for a long time now and I see absolutely no reason to change my mind. To the contrary, all of the data coming in continues to suggest that we have been correct and has it has confirmed everything that we had already seen prior.

If we’re above those former highs from the past year, we want to continue to buy stocks very aggressively and sell bonds and gold just as hard.

From a risk management standpoint, if we at some point fall below last week’s lows in both of these ratios, then a reevaluation of this thesis would be warranted. In that scenario, I will be happy to change my mind and adjust the strategy accordingly if the data suggests it would be the wise thing to do. But that’s not today.

If you’re not already a member, start your 30-day risk Free trial here to check out our buy list