I’ve been out of town for the past week clearing my head and taking a break from markets. This is one of the most important parts of my entire process. I explained why in this post. While I was away, I peaked at the Internets to see what the twitterati was up to while I was on vacation. Since I was in Hawaii, 6 hours removed from New York City, most of what I read was after market hours. Boy are you guys pessimistic! Do you not see that stocks are in major uptrends? And not just in the U.S. but all over the world? Do you not read anything I write? I could not have laid out the bull case an clearer before I left.

Today I wanted to share with you what I think is one of the more bullish developments we’ve seen this month: the Russell Micro-cap Index breaking out to a new all-time high. If I have not exhausted this notion enough by now, let me stress: a new all-time high is NOT a characteristic of a downtrend. This is not an opinion. This is simply a fact. Write it down. Tattoo it on your forehead if you have to. Trust me, it took me a long time to finally understand this concept, so don’t think I’m talking down to you. I’m obnoxious about it because I wish someone had been more tenacious about this concept earlier in my career. It took me too many years to finally get it. I don’t want that to happen to you, a loyal reader. If it wasn’t for you guys, I would not be where I am today, in my personal life or professional career. So I owe it to you!

First, here is a little background. This is the iShares Russell Micro-cap Index Fund $IWC. You can see that it peaked in June of 2007, several months before the large-cap S&P500 and Dow Jones Industrial Averages hit their peaks that Fall. The relative weakness was there. After that epic collapse through 2008, it wasn’t until Summer of 2013 that Micro-caps were finally able to break out above those former all-time highs. Notice the successful retest early last year of that former resistance. We even had a little whipsaw briefly below those former highs to spark the epic rally that we saw through 2016: 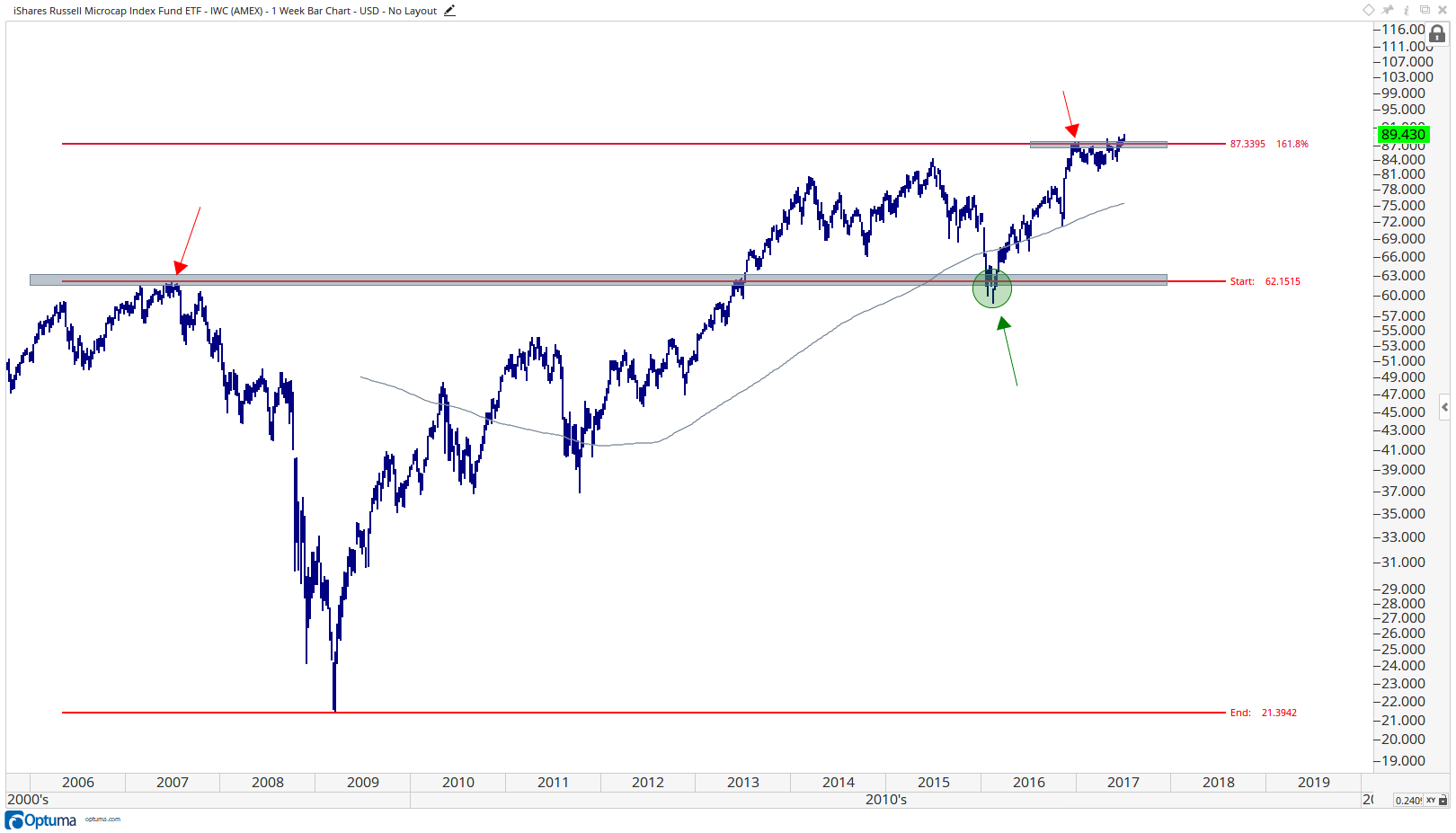 Late last year, prices hit the 161.8% extension of the entire 2007-2009 decline. This is a logical area for prices to stop rallying. Sure enough, the 900 year old arithmetic is still helping us today. Russell Micro-caps hit a brick wall at that Fibonacci extension level and immediately stopped going up. It now appears that 6 months of consolidation was enough. This week, Micro-caps broke out of this base to a new all-time high. This is not a characteristic of a downtrend.

Here is a closer look at the 6 month base and fresh breakout. We are in an uptrend over the long-term, obviously. But in the short-term, this consolidation also came within the context of a cyclical bull market that began early last year. The target has been and remains $100. This is the 161.8% extension of the 2015-2016 correction. This is where I think we’re going. 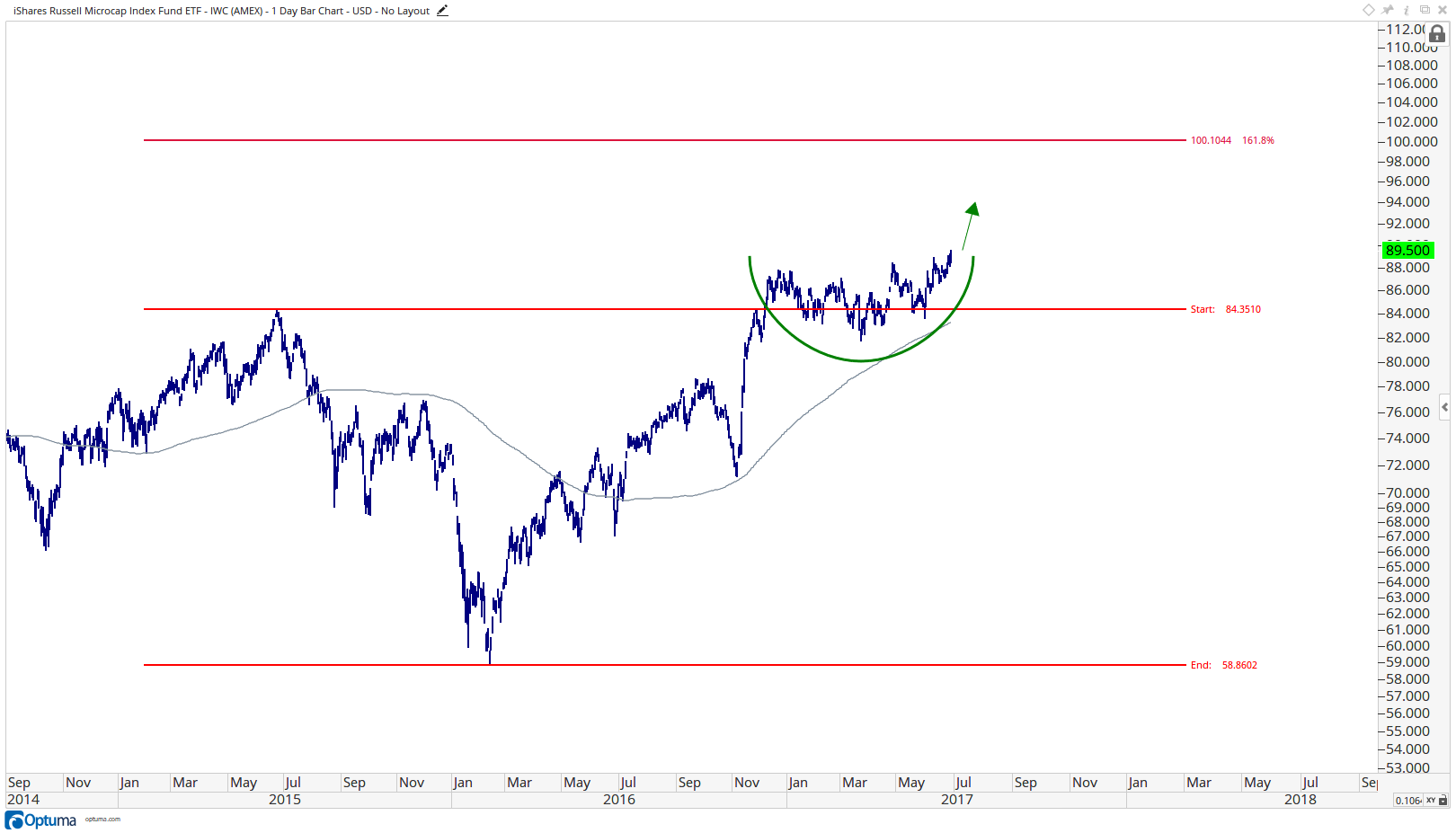 We want to be buyers of any weakness here. Looking more broadly, think about this: if Micro-caps are breaking out of a huge base and heading to $100, is that the sort of market environment where we want to be shorting stocks? Are Micro-caps ripping higher evidence of risk appetite or risk aversion?

This is not a bearish stock market environment folks. If and when it is, I will be the first to raise my hand and start pointing to all the short opportunities out there. You know I will. The reason is because I don’t care at all in which direction the market goes. I’m too old to be worrying about arbitrary things like market direction. It doesn’t matter to me if the market doubles or gets cut in half. I DON’T CARE AT ALL.

For now, the weight-of-the-evidence continues to suggest there is an underlying bid for stocks overwhelming any supply. You guys feel free to make up reasons for it: the Fed, Trump, Taxes, whatever. The story you guys lie to yourselves about isn’t my problem. Trends are. And the trend here in Micro-caps is not down.

PS – I will be publishing my Q3 Playbook this week. Make sure you’ve at least registered for a risk FREE trial to make sure you receive a copy.