This is a new year with fresh opportunities to buy some things and short others. It’s a two way market. Anyone who has been sitting in Gold over the past 4 years is frustrated. If you’ve been in Gold the past 18 months, it must feel even worse. You could have pretty much bought anything else and done well: Stocks, Energy, Crypto. There is a lot of pent up pressure in the Gold market.

I’ve been in the camp that Gold has either been a stay away or a short. This has gone on for the past 18 months since our upside targets were hit. It’s worked out relatively well for a long time, particularly the stay away from piece of that. The opportunity costs of being involved in this space has been off the charts.

I have to weigh all of the evidence as it comes in and isolate only the best risk vs reward opportunities regardless of the direction. Based on the overwhelming amount of positive momentum in gold, other metals and mining stocks, combined with the recent breakouts in Canada and Australian stock markets, it’s hard for me to be bearish metals in general, precious or otherwise. Copper and other base metals continue to make new highs as well, but that’s nothing new.

Today I wanted to share with you what I thought is probably the most interesting, and bullish Gold chart I’ve seen. Here we’re looking at Gold priced in Emerging Markets Currencies. Rather than pricing Gold in traditional US Dollars, I always like to approach it from different angles to a get a better true value perspective. In this case I equally-weighted China, Mexico, South Korea, Turkey, India, Russia, Brazil and South Africa and used this basket as the denominator: 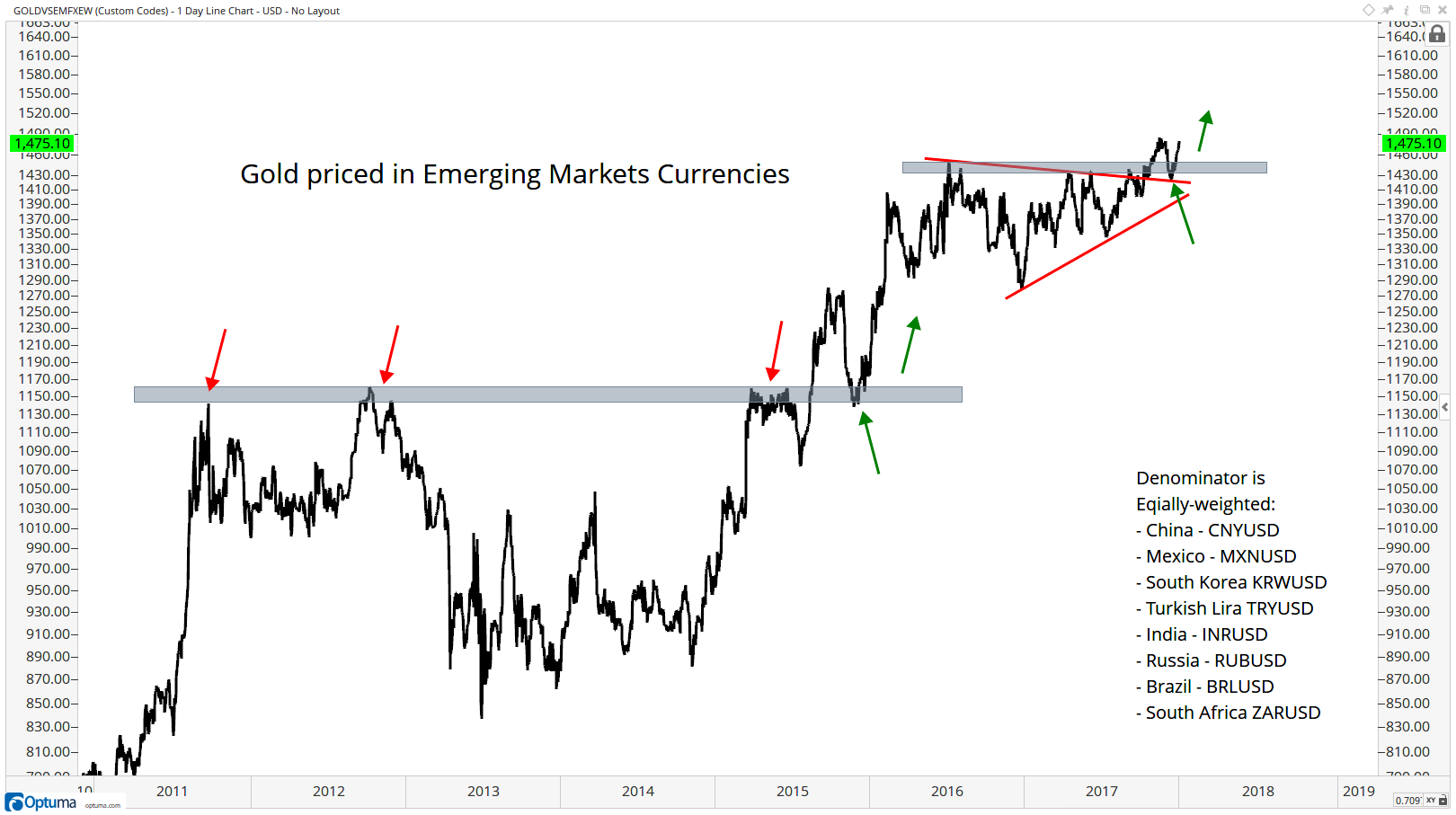 What I see is a massive base from the 2011 to late 2015. After breaking out, the retest of that former resistance sparked the early 2016 rally in all precious metals. Look how they all rallied into that summer of 2016. Since then we have gone sideways. The nasty mess that Gold has been, as mentioned above, can be seen in this chart very clearly. Look at this 18 months of nothing, perfectly describing the price action in Gold investments in general.

So what now? Well we’re breaking out of an 18-month base to new all-time highs. And we have successfully retested that breakout level. So things become very simple here. We want to be long Precious metals if we’re above those 2016 highs in this ratio. It’s about 1400 by my work.

What does this mean? Do we need to create this scenario in our own accounts? You can. But no, I would keep things simple. The overwhelming evidence is suggesting the risk here in metals and mining stocks is higher. The risk vs reward is skewed in favor of the bulls if we’re above those Summer 2016 highs. This is based on momentum, this Gold vs EM Chart above, and many others found in my Chartbook of over 100 Gold & Gold related Charts. Premium Members can access those here.

I like to rip through this workbook of charts on a weekly basis and take notes. The notes that I’ve had on there the past 18 months look a lot different than the ones I have on there now. We’ll see how long this lasts, but for now, I think we need to err on the long side of metals.

Are you a Financial Advisor? Check out the Advisors Corner