Since late August when interest rates around the globe began their counter-trend rally we’ve begun to see some outperformance from international equities…leading to headlines like this. 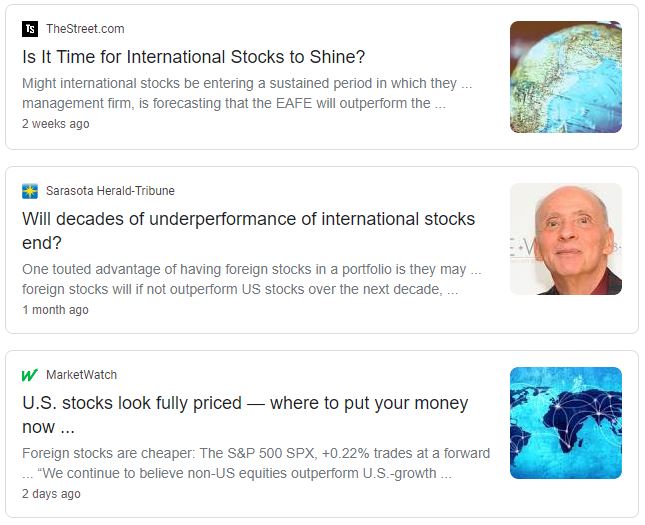 So, is the trend in international underperformance finally over?

Here’s a chart of the S&P 500 relative to the FTSE All-World Ex-US Index (SPY/VEU). Now this is a 10-year + chart showing the massive outperformance of US stocks since they broke out to new highs in 2012.

It’s clear that the trend is higher and has been for a long time…so what’s sparking this sudden interest in international stocks?

Well, if you look realllllly close you can see a 3% price decline in this ratio from late August until early November. After a 155% rally off the 2008 lows, I’m happy to share that we’ve all survived the massive correction and are now trending higher once again.

I’m being facetious, but this is a great example of putting data into its historical context. When you look at a daily chart you see what looks like prices beginning to reverse, but when you zoom out and view the structural trend you realize that not much has changed at all.

From our perspective, there’s little reason to overcomplicate this. Prices continue to make higher highs and higher lows and momentum remains in a bullish range…despite the multi-year divergence. But as we’ve seen in the past, momentum divergences need price confirmation before we can act on them and often work themselves out through time rather than price. We saw that in 2016-2017 and so far, there’s been little downside follow-through in price to suggest it matters just yet.

So what would identify a meaningful trend reversal in this ratio?

First off, prices need to stop going up. By definition, markets go up, sideways, and down. Very rarely are we going to see a market reverse on a dime and take off in the opposite direction… especially if it’s a ratio of two vehicles that hold many many securities. Individual stocks?

It doesn’t work that way. Asset allocators are slow movers and this trend will take time to unwind…probably longer than most of us think it will.

The second thing we need to see is momentum shifting into a bearish range. Since prices broke out in 2011 we’ve not seen a single instance of the 14-week RSI getting oversold. It got close, but it didn’t quite get there, signaling to us that buyers remained in control. Strong markets don’t get oversold and weak markets don’t get overbought is how I learned it.

The third thing, and what we’ll see ahead of the other two factors, is outperformance from individual countries. These diversified international indexes are made up of individual countries that are made up of individual stocks. They’re unlikely to all begin outperforming at once. Instead, we’ll see the trend shift stock by stock, country by country until there’s enough change for it to affect prices of the diversified indexes like VEU.

This most recent move was characterized by strength in areas like Portugal that met their downside price objectives and began mean-reverting relative to US stocks. Unfortunately, momentum failed to reach overbought territory and prices are now rolling over again. That is not action indicative of a long-term bottom. We need to see prices begin to stabilize above their year-to-date lows and begin working their way higher.

We’re not there yet.

When the shift from the US to international stocks takes place we’ll have plenty of time to participate. These asset allocation changes affect billions and billions of dollars and are not going to change overnight. That’s part of the reason this trend has been so strong for so long in the first place.

Money goes where it’s treated best and for now, that remains in US stocks.

We’ll continue to weigh the evidence as it comes in and look for the three pieces of evidence listed above to tip us off that something is changing.

Until then, do yourself a favor and ignore the sensationalist headlines claiming the end of international underperformance. When the real turn comes, the media will be the last people to tell you…trust me.