Remember Crypto Currencies? The conversations over Thanksgiving dinners in 2017 were really something. It feels like just yesterday we were still feeling the euphoria of the Crypto Craze.

So now what? What’s happened since the epic 80%+ crash that destroyed the hopes and dreams of the greedy fools that fell for the ‘get rich quick’ appeal of the “new currency” (that wasn’t really new at all)? Where is Bitcoin today?

Well, late last year Bitcoin bottomed out and started a new uptrend in April. The reason I say that is because we had a classic continuation pattern throughout late 2018 and early 2019. Continuation patterns, by definition, resolve in the direction of the underlying trend, which in this case, was down, obviously: 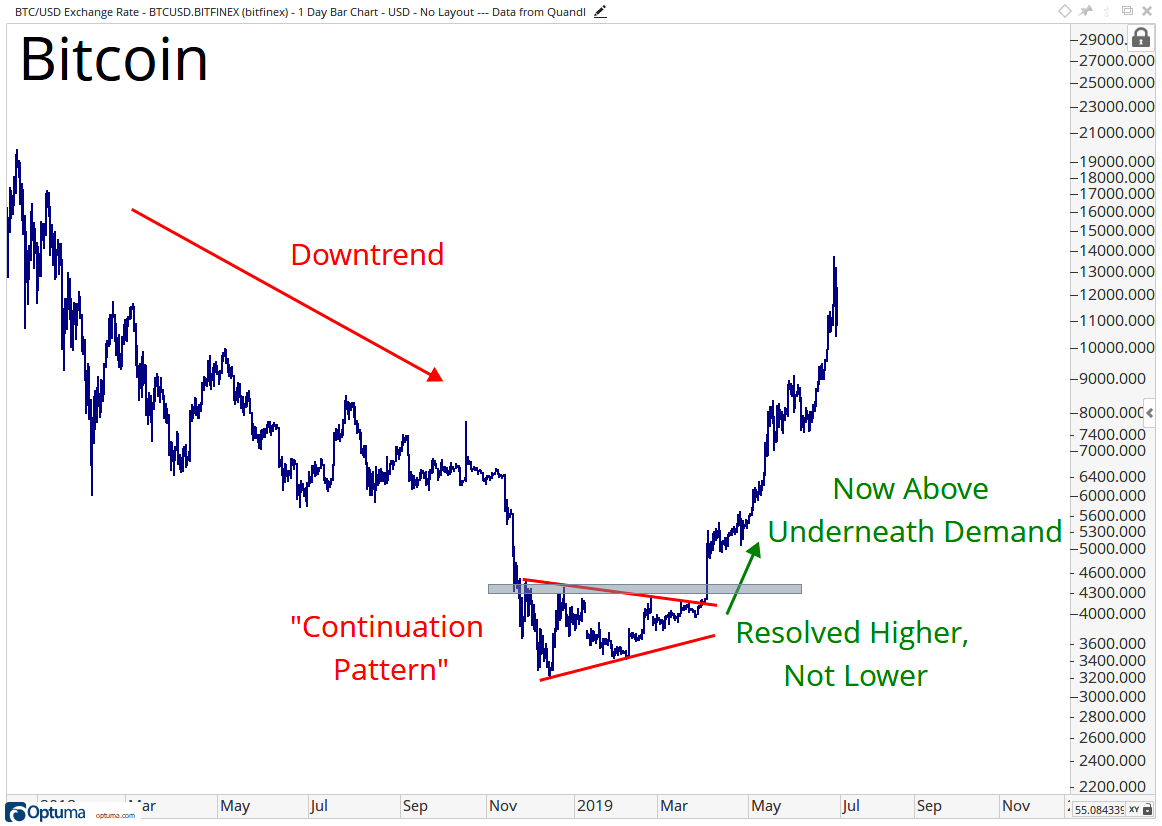 When continuation patterns resolve in the opposite direction, in this case higher, something has changed. Bitcoin here entered into a new uptrend in the second quarter. In fact, prices tripled after this, which is classic behavior after this type of development.

OK, so now what? Nice triple after one of the greatest crashes of all-time! Where do we go from here?

Well, it looks to me like the complete opposite of what happened in April. In this case we had a prior uptrend that worked its way into a classic continuation pattern. However, like in April, Bitcoin did NOT resolve in the direction of the underlying trend. It resolved lower, making this NOT a continuation pattern, and no longer an uptrend: 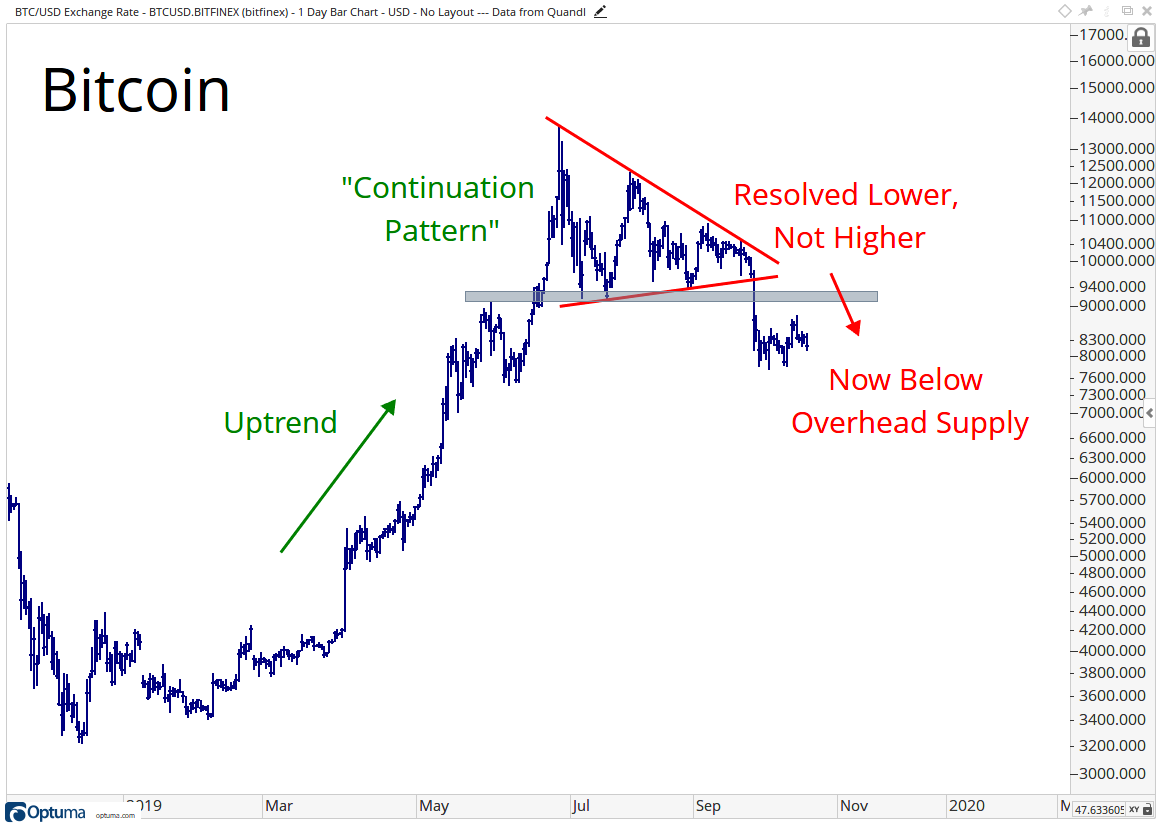 Like in April, where once Bitcoin broke out, prices were above underneath demand, Bitcoin is now below overhead supply after breaking down below support. If we’re below 9000-9500 there is no reason to think this is in any kind of uptrend. Quite the opposite in fact.

It actually reminds me of US Treasury Bonds in the Summer of 2016. We had a prior uptrend which worked its way into a “Continuation Pattern” that resolved lower, instead of higher. Bonds absolutely collapsed from there, which is standard behavior: 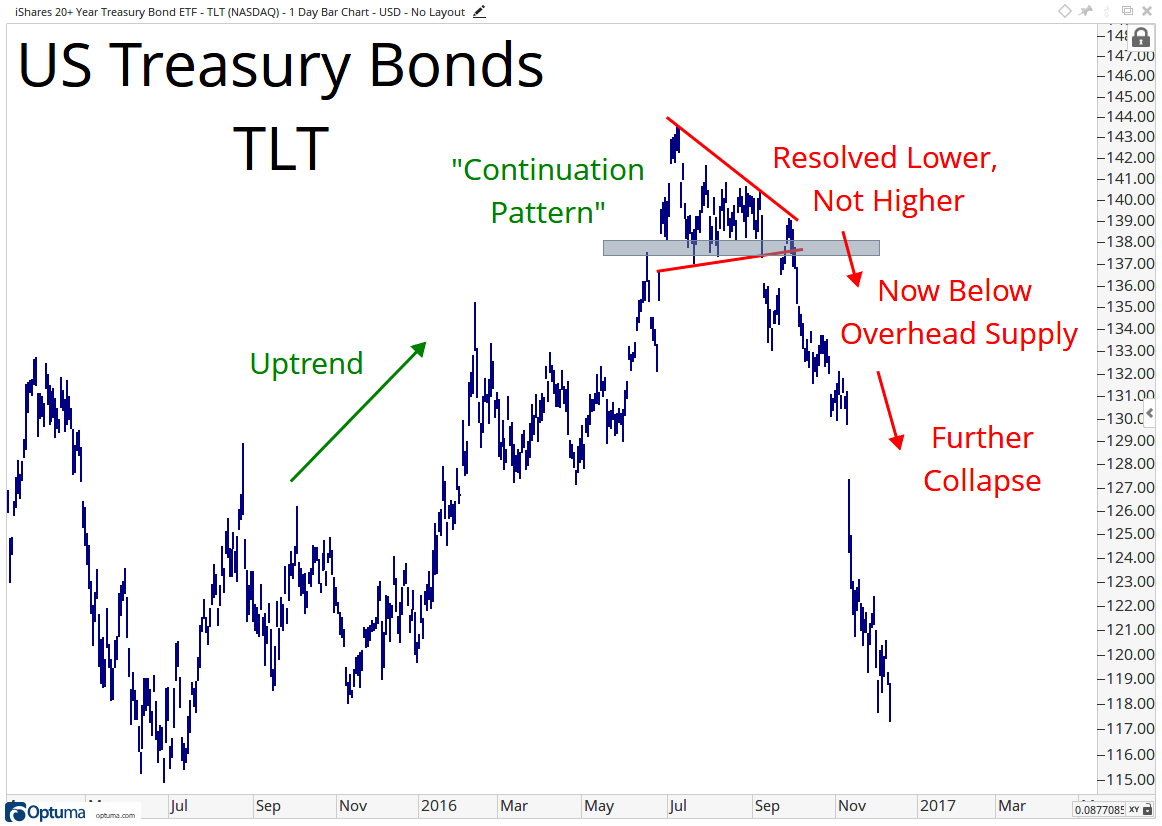 This outcome is what we should expect from Bitcoin moving forward unless it proves otherwise and breaks out above 10,000 again. I think this is the lower probability outcome, of course, but it’s important to be aware that we have no idea what will happen next. The higher probability here is further collapse in the crypto currency that we call Bitcoin.

Let the market prove us wrong and then we’ll be happy to enter from the long side again. In the meantime, we’re expecting lower prices and do not want to own it. There are much better places to be.