I love technical analysis. I really do. There’s no question that finding a nice chart brings a great amount of joy to my life. Today I want to share with you what I think is one of the most important developments to occur over the past couple of months. Interest rates have been ripping higher, yes we know this. But to me it’s what is happening in Banks and Real Estate Investment Trusts that continues to grab my attention. These groups of stocks are doing the exact opposite today that they were doing at the beginning of 2016, when I was pounding the table about rates going a lot lower.

Interest rates have exploded higher into year-end from a low near 1.37% on the 10-year yield up to over 2.6%. But one of the big reasons that had me so bullish rates since July was that while the 10-year was making lower lows into the summer, the ratio between Regional Banks and REITs held the early 2015 low and started to rally: 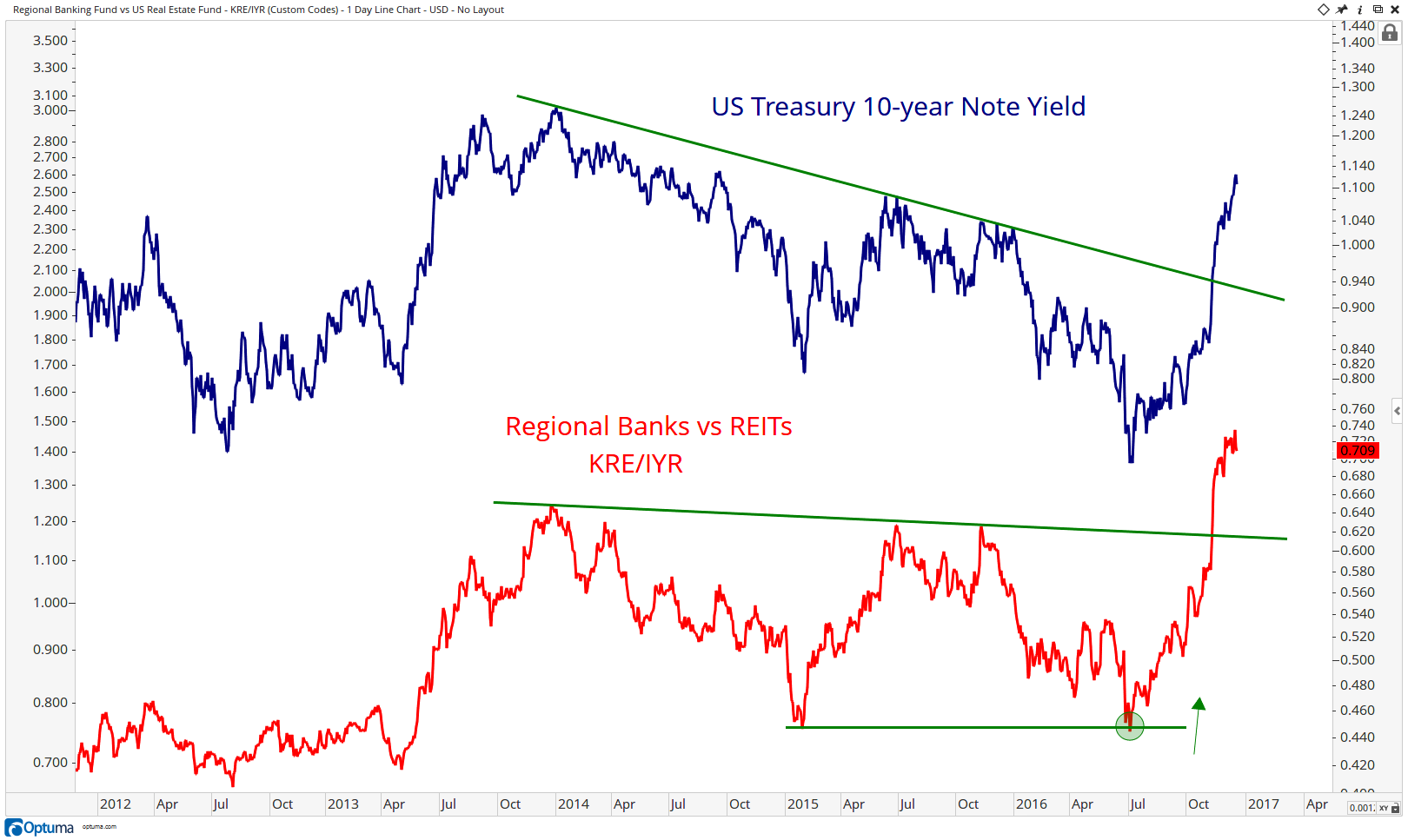 To me, this has been the best tell for where rates are going, and for a long time. Who cares what the fed thinks? They’re not our problem. We’re not theirs. Regional Bank stocks are rallying because markets are pricing in higher rates and REITs are falling relative to Banks stocks because markets are pricing higher rates. If rates rise, there becomes less demand for stocks with higher dividends, like REITs. So there is direct market behavior here that has been suggesting higher rates since early July.

At this point, we now have broken above downtrend line from late 2013 highs, which marked the highs in rates and this ratio between Regional Banks and REITs. Since the spread has been a great leading indicator for rates, I would have to argue that the ratio taking out its late 2013 highs is a positive sign and suggests rates can do the same.

Technician John Roque, one of my personal favorites, was a recent guest on Masters In Business with Barry Ritholtz on Bloomberg Radio.  I thought the way that he explained financials was dead on. Roque compared Financials right now, particularly on a relative basis, as a great professional athlete who has just sprinted and needs a breather. But after some time to catch his breadth, the athlete will be back on his feet and can keep going. I think right now, Financials just had a monster move, but need to take a breadth. This was super powerful coming out of this base and I think both of these charts above have room to run higher in 2017.