If you have a closed mind towards Elliott Wave Counts, please stop reading Now. For you market participants that like to look for 3 of 3 waves, then this is for you.

Ari Wald, a chart-watcher over at Brown Brothers Harriman, argues this morning that:

We have compelling technical reasons to believe that the low in the S&P 500 is likely set for the year. The combination of a key reversal day at 1100 (38.2% bull market retracement) confirmed with lesser intensity and subsequently strong buying power, oversold and pessimistic conditions, the likely completion of a 5-wave decline since May, and improving seasonals are supports for a year-end rally. October lows tend to precede year-end strength, and we too expect a countertrend rally to develop. Our upside expectation for this multi-month rally is to 1230-60. Key retracements from the decline since May, the September peak, the neckline of the Head-&-Shoulders topping pattern, and the 200-day moving average – all converge in this zone indicating formidable resistance.

Here is the 5 wave count he is talking about. Keep in mind that wave 3 is typically the most violent of the 5. Personally, I like to start there, and work my way up and down. This is a very subjective form of analysis, and most people don’t understand it. So to keep it simple, just remember that there are 5 waves in the direction of the major trend, followed by corrective waves typically in an A-B-C (3 wave) pattern. According to Ari Wald’s analysis, we should be somewhere in the Wave-A up, before a Wave-B down that doesn’t quite get as low as the Wave-5 bottom, and potentially another Wave-C even higher than where Wave-A topped out. 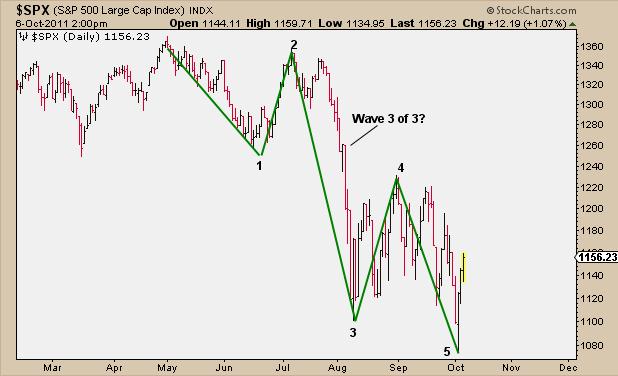 Are The Year’s Lows In The Rear-View Mirror? (WSJ)