From the Desk of Steve Strazza @Sstrazza

While there have been some real winners during the recent rally, the run off the lows from this fall has also left many stocks behind.

Value stocks, cyclicals, and blue-chip names have prospered for the past two months, as groups like financials and industrials have been the latest beneficiaries of sector rotation.

At the same time, mega-cap technology and the most-speculative growth areas of the market have continued to show relative weakness.

To be clear, it’s not like these stocks have been crashing lower while the rest of the market rallies. Of course, many have participated in the upside action.

But, on balance, the performance from growth stocks has been lackluster.

The Dow has rallied almost 20% off its October low, retracing more than 62% of its year-to-date drawdown. Notice how it briefly reclaimed the August highs last week before undercutting them yesterday.

Meanwhile, the Nasdaq is only about 10% off its lows, representing a measly retracement of about 20%. It would have to rally about 19% from current levels just to test its highs from this summer.

The leaders have doubled the return of the laggards. It’s that simple.

So, which stocks do you want to own as we head into the final month of the year?

One way we can identify the leaders we want to be buying is to analyze where the charts are versus their August highs.

Remember, there’s only one way a stock can establish an uptrend: It has to make higher highs.

We scanned the entire Russell 3000 to see which names have already achieved this.

We’ll outline our favorite long setups in just a minute.

Before we do, let’s discuss some takeaways and themes that stood out in our analysis.

Here’s a table showing the percentage of components above their August highs, by sector:

The last column represents the percentage the average component is above/below its respective August high.

Even in the strongest sectors, such as energy, the majority of components remain below their pivot highs, and the average percent above/below these highs is still negative.

In other words, this is an exclusive club to be in… at least for now.

Here’s another way to visualize the same data: 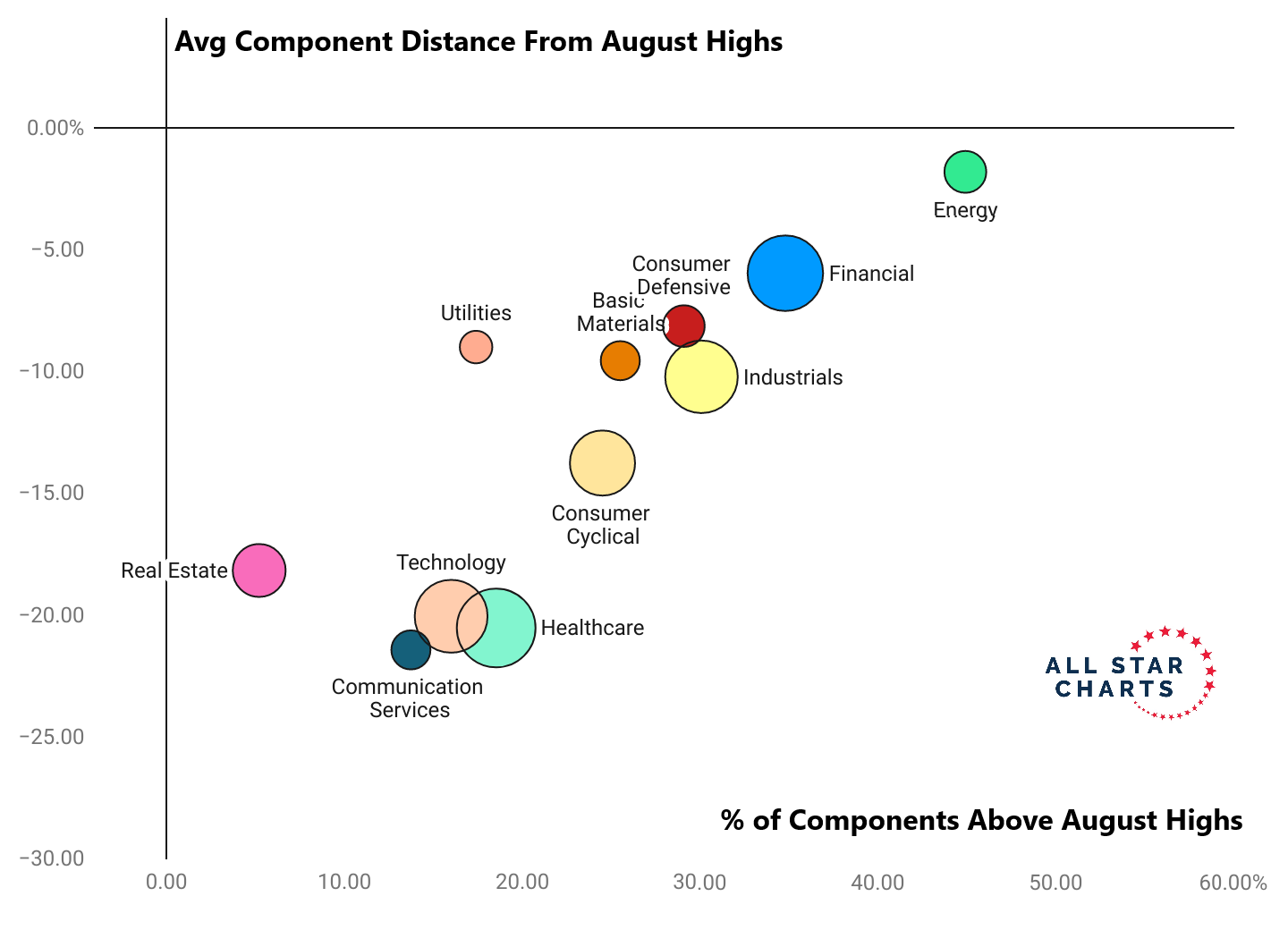 The size of the bubbles is determined by the number of components in each sector.

The X-axis is the percentage of components above the highs. And the Y-axis is the average component’s distance from its August high.

We already knew energy was a leader. This data definitely confirms that.

But it also supports the burgeoning strength we’ve seen of late from other cyclicals such as financials, industrials, and materials.

Meanwhile, the sectors that haven’t participated as much off the lows are all in the lower left.

We’re talking about the growthy groups such as technology, communications, and even health care.

Our strategy here is not complicated at all. In fact, it’s the same thing we’re always trying to do:

Now let’s dive in and discuss our favorite setups in names that have already taken out their summer highs.

Premium Members can log in to access the Trade Ideas in our favorite energy names. Please login or start your risk-free 30-day trial today.