I’m not sure if you noticed, but the MSCI Emerging Markets Index Fund just went out at the highest weekly close in its history. 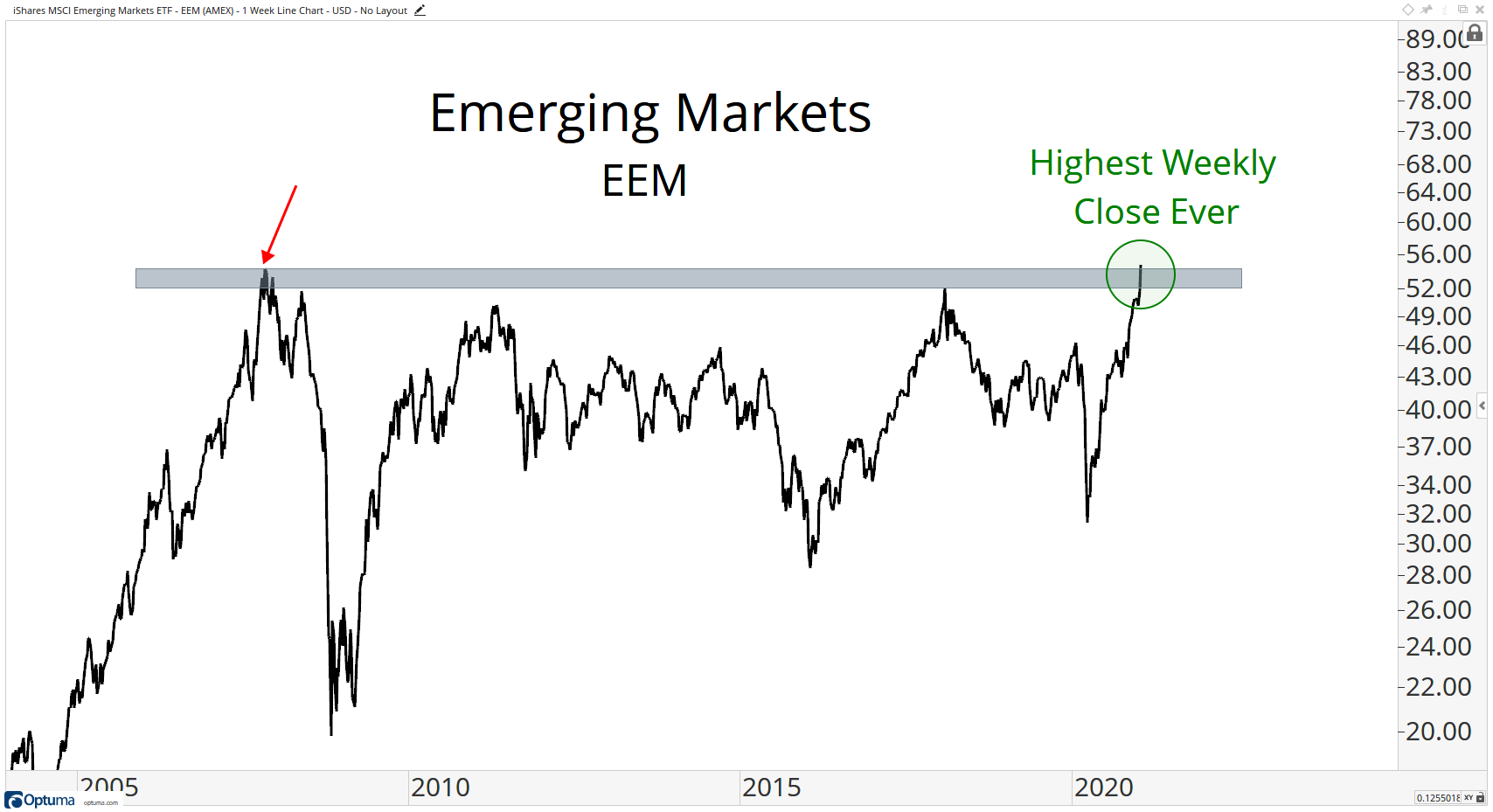 For you youngsters, this is a big deal.

You see, when I first got in this business, it was the Summer of 2003. Young JC was living in New York City for the first time, downtown in TriBeCa, ready to take on the world.

I was just an intern (envelope stuffer) at the time, at a firm called Merrill Lynch, which later went on to disappear with the likes of Lehman Brothers and Bear Stearns. At that time though, in 2003, this gig was a big deal.

Anyway, for the next 4 years, Emerging Markets AVERAGED A 100% RETURN PER YEAR.

Yes you read that right. My career got started with Emerging Markets being the best place to be on earth. That stuck with me.

If you ask veteran traders and investors, they’ll tell you that what was happening when you first got into the business will impact how you think for the rest of your career.

Fortunately, I haven’t been an Emerging Markets bug and have certainly recognized the underperformance. This could have gone very different, for sure. Thankfully, I’ve been self-aware about the success in Emerging Markets stocks when I first got to Wall Street, and that the environment over the past decade simply wasn’t that!

Look how poorly EM performed vs the U.S. and how that’s now changed since last summer: 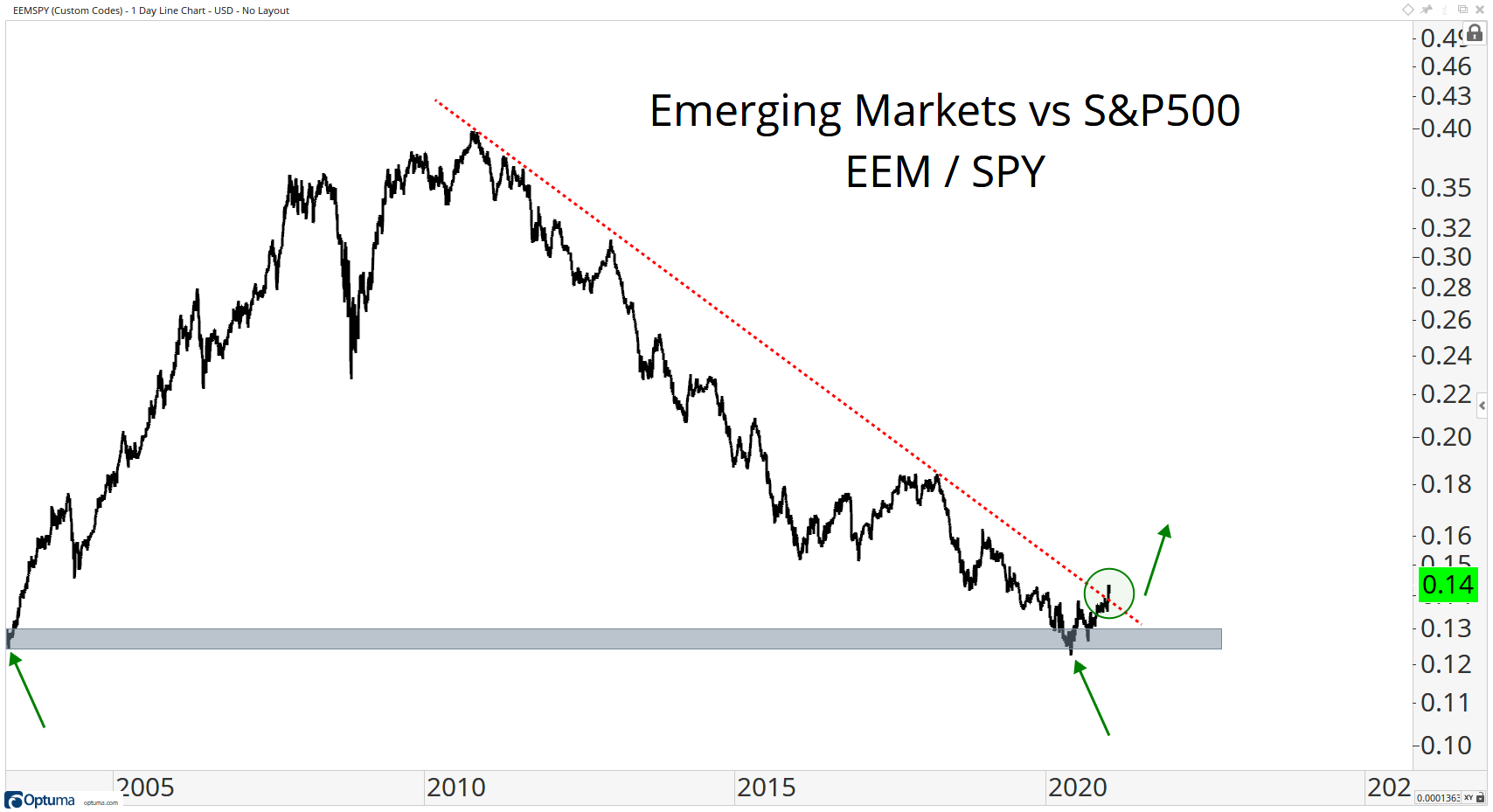 For me, it looks like the relative trend here is changing, or has changed, as Emerging Markets make new 52-week highs relative to the U.S.

And when you look at the absolute performance of $EEM breaking out of a 13-year base to new all-time highs (as the first chart shows above), what should we do? Fight it? Not own it? Short it?

The weight of the evidence continues to suggest that this is a hand we want to play.

And what is the largest component of Emerging Markets?

China has a 41.44% weighting in EEM according to the most recent iShares fact sheet.

Let’s check in on how those guys are doing?

So not bearish then? 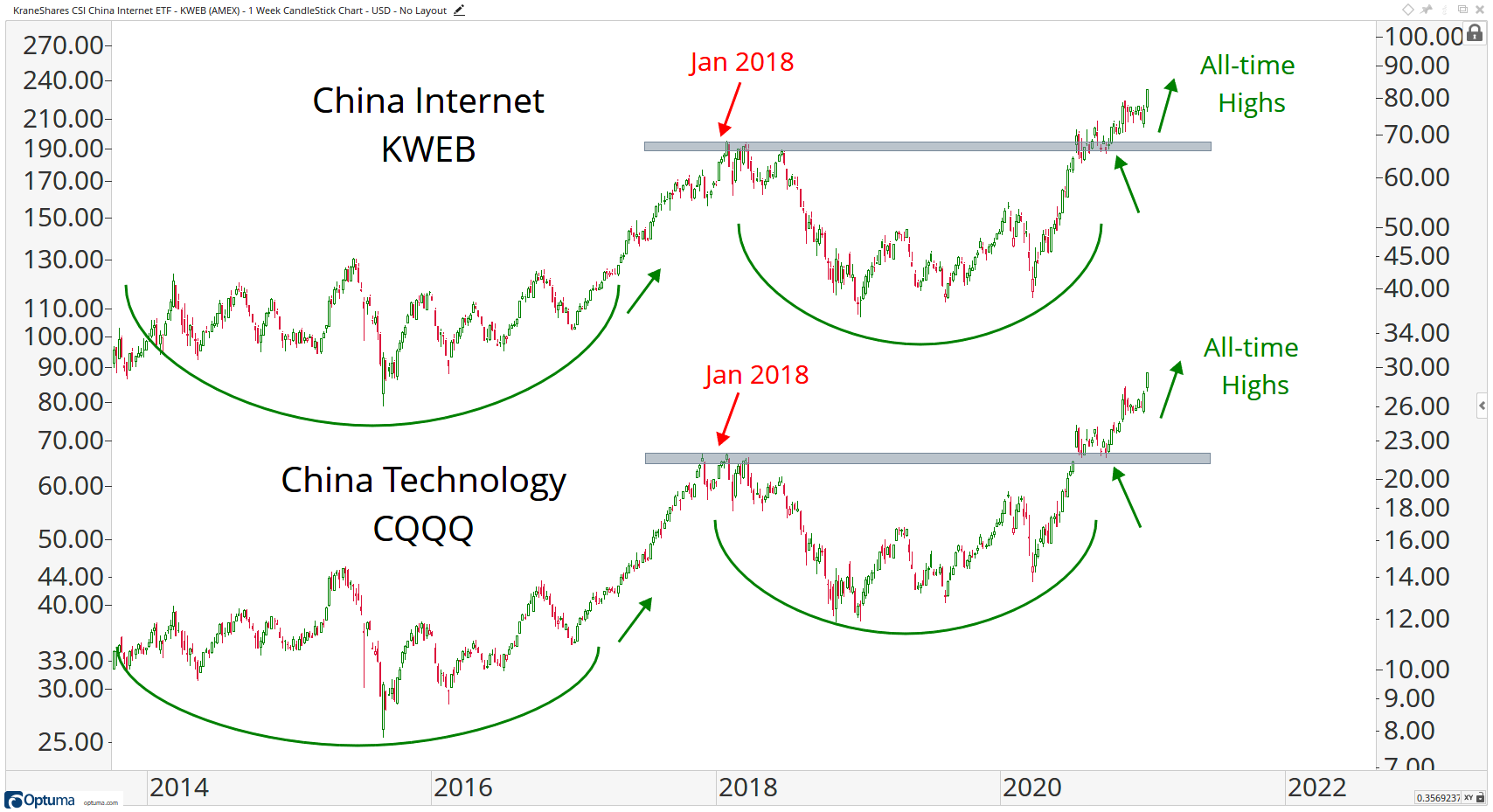 This Emerging Markets thing is a big theme.

You’ll find many of the stocks on our Trade Ideas list coming from this space. They’ve been coming. And I fully expect that trend to continue. So don’t be surprised to keep seeing Chinese and Emerging Markets stocks on the list. They’ve been showing up on our Under The Hood Reports, the 2 to 100 Club and most definitely throughout our top/down analysis. (If you’re not receiving these reports email me)

Also, keep in mind that when I first got into the business Emerging Markets were a Natural Resources play. That’s where all the hype was back then. The kids today love talking about their FAANG stocks. But the BRICs were the FAANG of those days: Brazil, Russia, India, China. BRICs were FAANG before FANG.

Today, it’s important to recognize that things in EM look much different.

The top holdings in Emerging Markets today include Alibaba, Tencent, Taiwan Semiconductor, Samsung and JD.com. These are the complete opposite of Natural Resources. Consumer Discretionary, Technology & Communications combined represent over half the Emerging Markets index.

This is a new year.

Don’t get left behind.

Speaking of new leadership, can you imagine if Financials keep outperforming throughout 2021?

What do the permabears have left, if even Financials are outperforming? Those are terrible people.

Here is the long-term chart of U.S. Financials vs the S&P500. Like we mentioned this summer, if Financials were ever going to start to outperform, this would be it. It’s funny, the title of my post back then was:

Narrator: “And Then Financials Began Outperforming In September 2020”

As this chart shows, this is exactly where they started to outperform after coming out of the depths of the Financial Crisis. 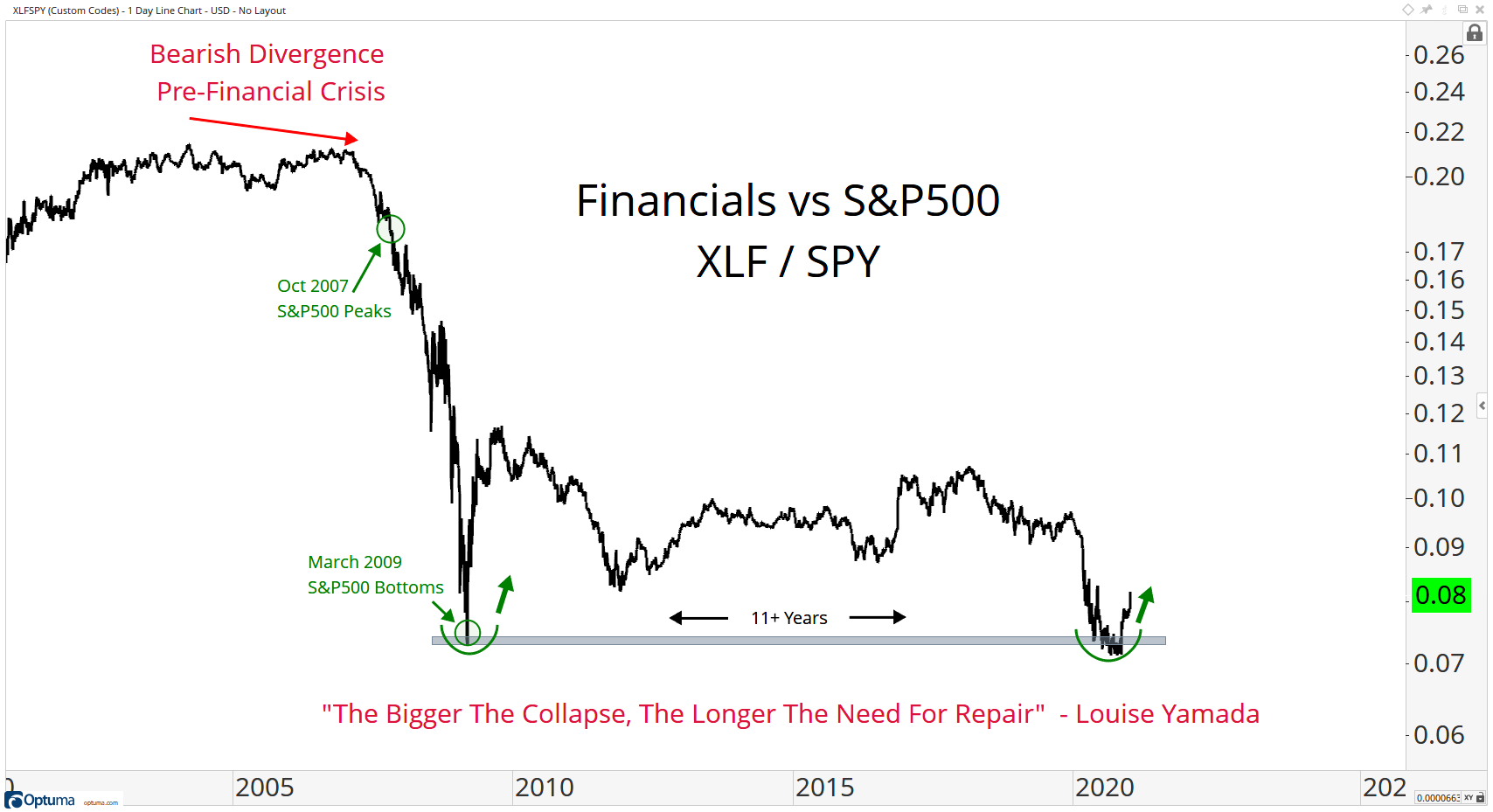 To quote one of my favorite Technical Analysts ever, Louise Yamada: “The Bigger The Collapse, The Longer The Need For Repair”.

I’d argue the GFC collapse was pretty big, and certainly fits that description. Here we are, over 13 years after the peak and Financials are still down near their lows from 2009. Relative to the rest of the market, Financials have made zero progress.

You can see them going nowhere here: 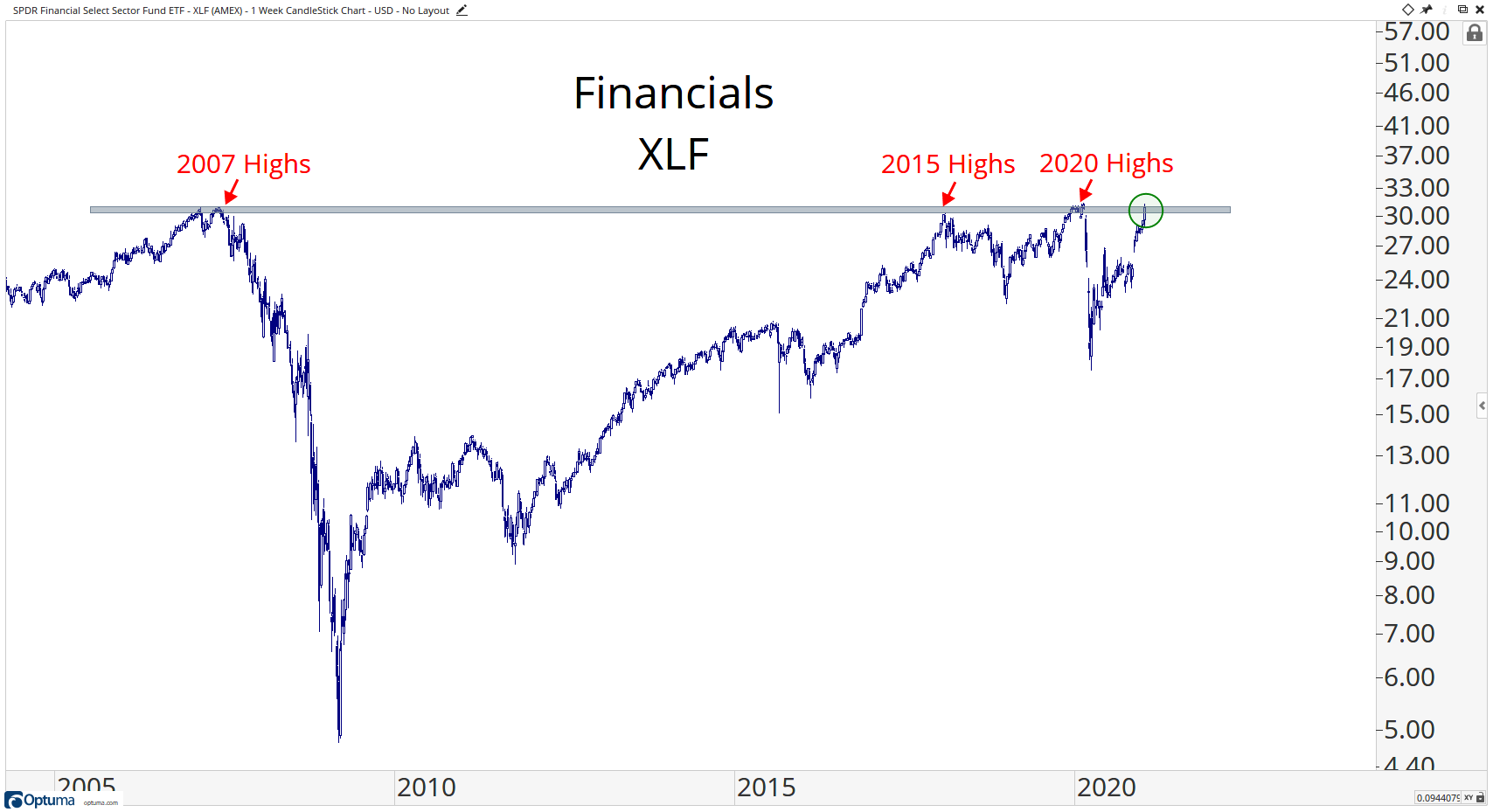 The way I learned it was that the more times a level is tested, the higher the likelihood that it breaks. This is test #4 by my count.

My bet is a breakout is coming.

My bet is the outperformance continues.

My bet is that people don’t see it coming.

My bet is that people will fight it.

My bet is that investors will blame others for their lack of exposure.

My bet is they will get angry at others instead of at themselves.

My bet is we will laugh about it.