One of the things that we like to focus on at our shop is the seasonality of the marketplace. There are several cycles that we look at including the 1-year stock market cycle, the Decennial Pattern and the Presidential Cycle. We’ll also like to take all of that information and put together an aggregate of the 3 charts to give us a road map for the year. It doesn’t always work to perfection, but it doesn’t have to. I actually tend to pay more attention when the market bucks the traditional seasonal trends. It’s during those times that we see there are larger forces at work.

Anyway, today I wanted discuss the Presidential cycle and the sixth year in particular. Generally, the mid-term election years generate some of the worst returns of the 4-year cycle. But during a President’s 2nd term, the statistics actually turn much more positive. My friend Jeff Hirsch over at the Stock Traders Almanac put out a great chart this week on this topic. If you don’t have the almanac on your desk, in my opinion you’re only cheating yourself. Here’s what Jeff had to say:

“Prior to President Obama, there have been seven previous presidents that served a sixth year in office since 1901; Presidents Wilson (1918), Roosevelt (1938), Eisenhower (1958), Nixon (1974, resigned after completing more than half the year in office), Reagan (1986), Clinton (1998) and G.W.Bush (2006). President McKinley was elected to a second term, but was assassinated in his fifth year in office. Sixth years are also midterm years, however in these past seven midterm years the market fared much better. In the following two charts the one-year seasonal pattern for Sixth years is compared to all midterm years and 2014 year-to-date.” 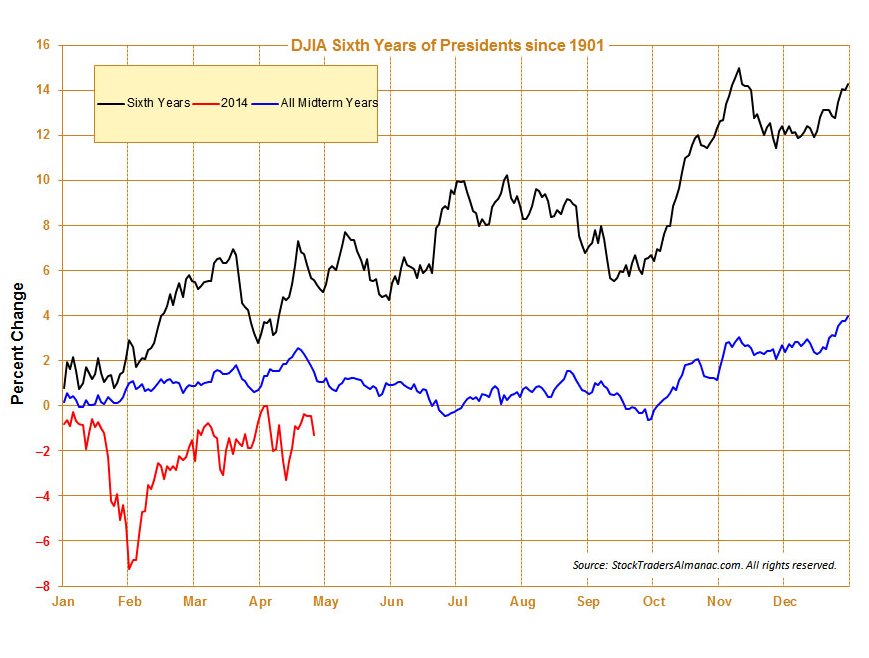 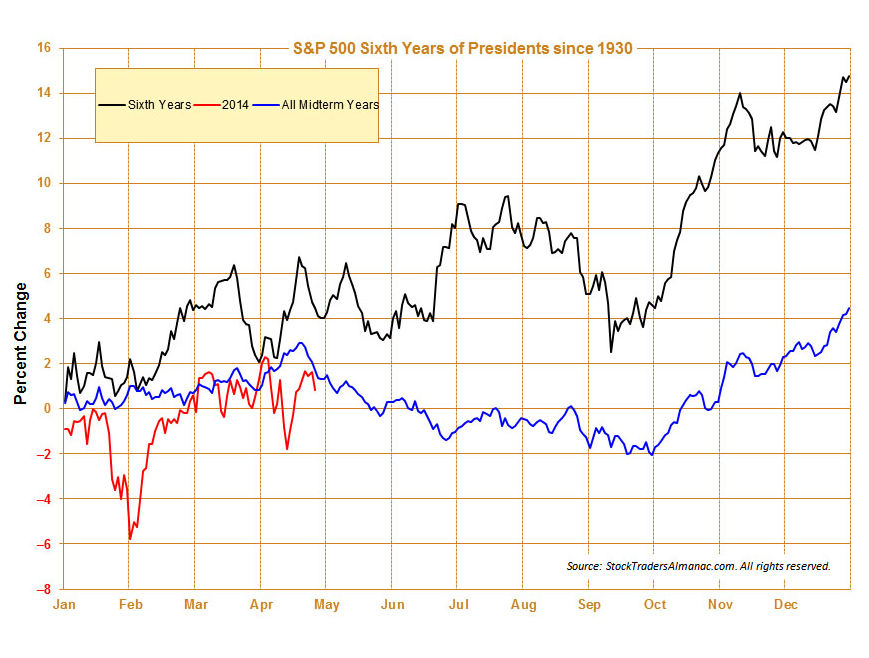 “DJIA and S&P 500 averaged 14.3% and 14.8% respectively in Sixth years and only 1974 was negative. However, in typical midterm-year fashion, the bulk of these gains were delivered in the fourth quarter of the year, on average, while chopping trading was the norm during the first three quarters.”

I think this is a really interesting pattern. From a cyclical perspective, the best years of the presidential cycle tend to be the last 2; the Pre-Election Year and the Election Year. But the gains historically start coming in towards the end of the Mid-term Election year. I think it’s fascinating how in the 6th years, this mid-term fourth quarter rally becomes even more impressive. In addition to the presidential cycle, the 5th year of every decade happens to be the best one of the Decennial Pattern, by far (see here). So although I’m not thrilled about the stock market right now, I can see how any dip or sell-off we might have could potentially be a tremendous buying opportunity down the road. Historically some major bottoms have been put in during mid-term years.

We will continue to take things one day at a time and constantly weigh all of the evidence. I personally don’t care in which direction the market moves, I just want it to move. We will continue to look for good risk/reward opportunities whether it be in the stock market, bond market, commodities or currencies. It really doesn’t matter to me, I treat them all the same. Right now, a more neutral or bearish stance in US Stocks still seems to be the most appropriate. If the data changes, we will adjust that strategy accordingly.

REGISTER HERE for more information on how to access these seasonal statistics on a weekly basis.