Last week a structural breakout in AUD/USD was confirmed. Whether you trade currencies or not, it’s worth paying attention to because of its implications from an inter-market perspective.

From a structural point of view, the Australian Dollar has been in a downtrend since 2012, with the selling really accelerating in late 2014. Recently this pair met its downside target at support near 0.68-0.69 and began consolidating as momentum diverged positively. Last week, prices broke above the downtrend line from the November 2014 highs to confirm the bullish divergence and breakout. This development suggests that as long as prices remain above the downtrend line, this market is likely headed toward prior support near 0.8075-0.81. 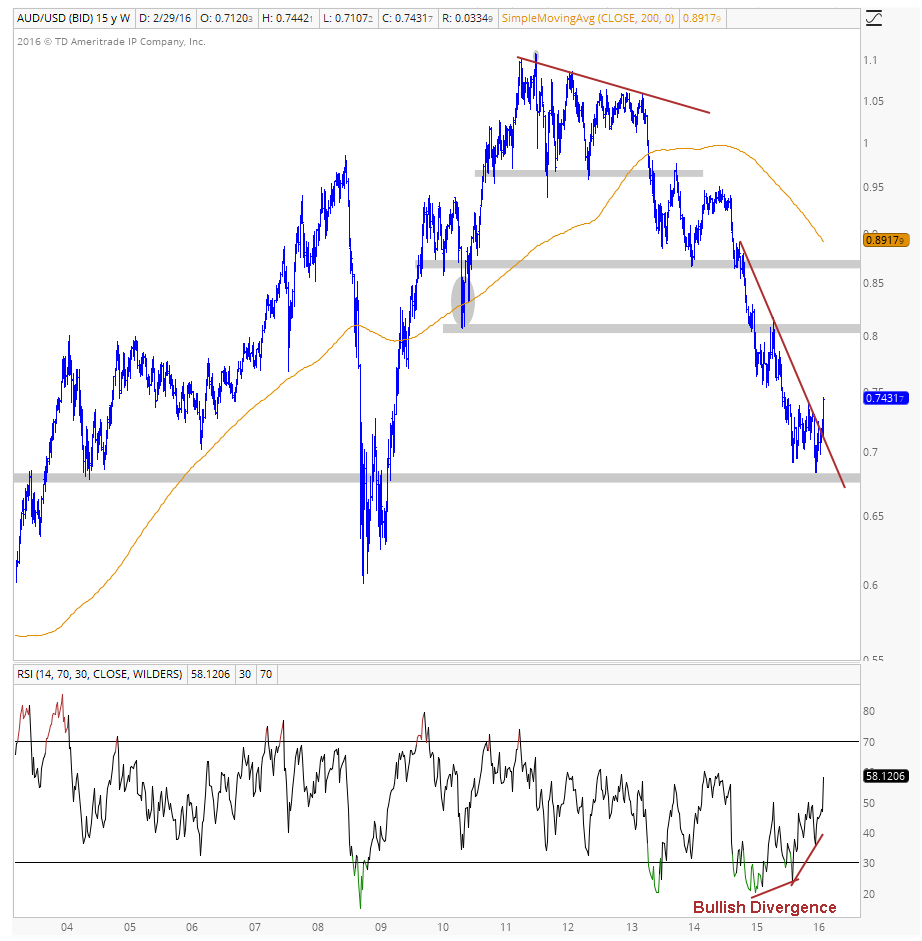 The daily chart provides a more tactical view of the breakout discussed on the weekly chart. January’s failed breakdown below the September lows was the catalyst to spark the recent move higher. Despite these improvements, the 200 day moving average remains downward sloping and momentum remains in a bearish range. This suggests that some consolidation at current levels would be beneficial before moving higher. 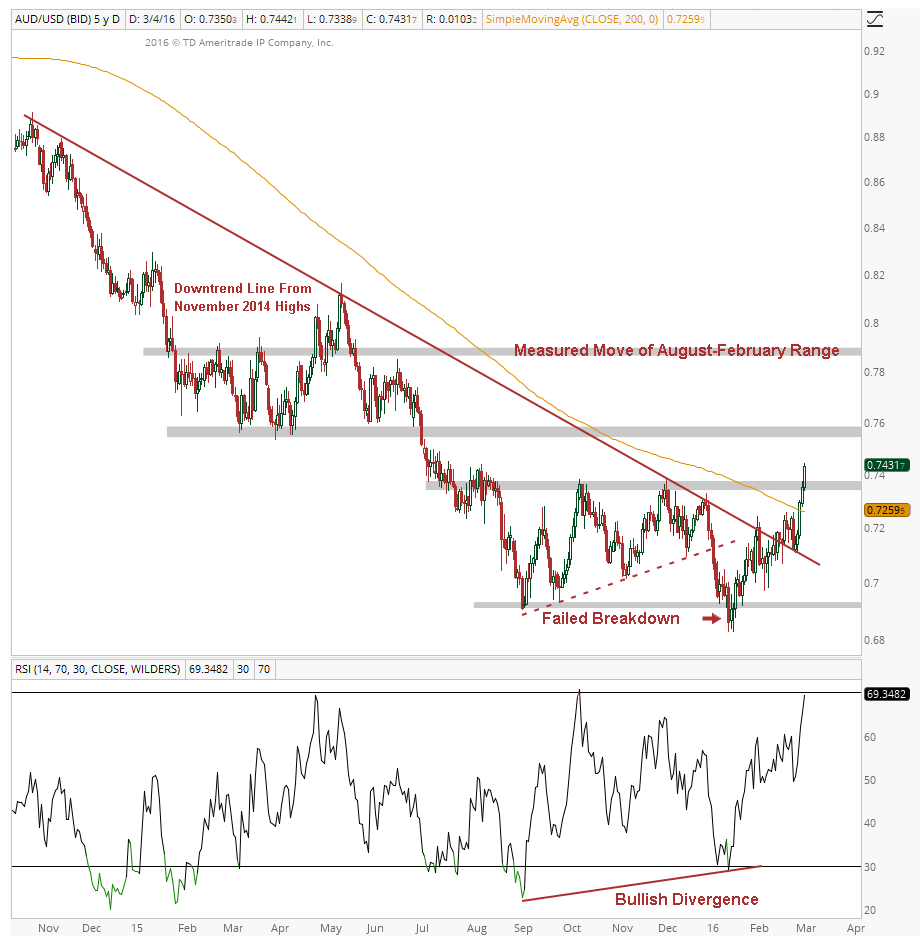 With that being said, tactically we only want to be long above support at 0.7340 on a closing basis, and would like to see prices consolidate above that level to allow the 200 day moving average to flatten out and begin rising. The measured move of the August-February range corresponds with a prior support level at 0.7860-0.79, but we can expect some resistance at the March and April 2015 lows.

It should be noted that the Australian Dollar is positively correlated with Australian equities, which also broke out last week. After making new lows to start the year, prices quickly reclaimed prior support and broke out above the downtrend line from the July highs. This confirmed the bullish momentum divergence and failed breakdown, suggesting that prices are likely headed toward prior support near 21.75-22.00. 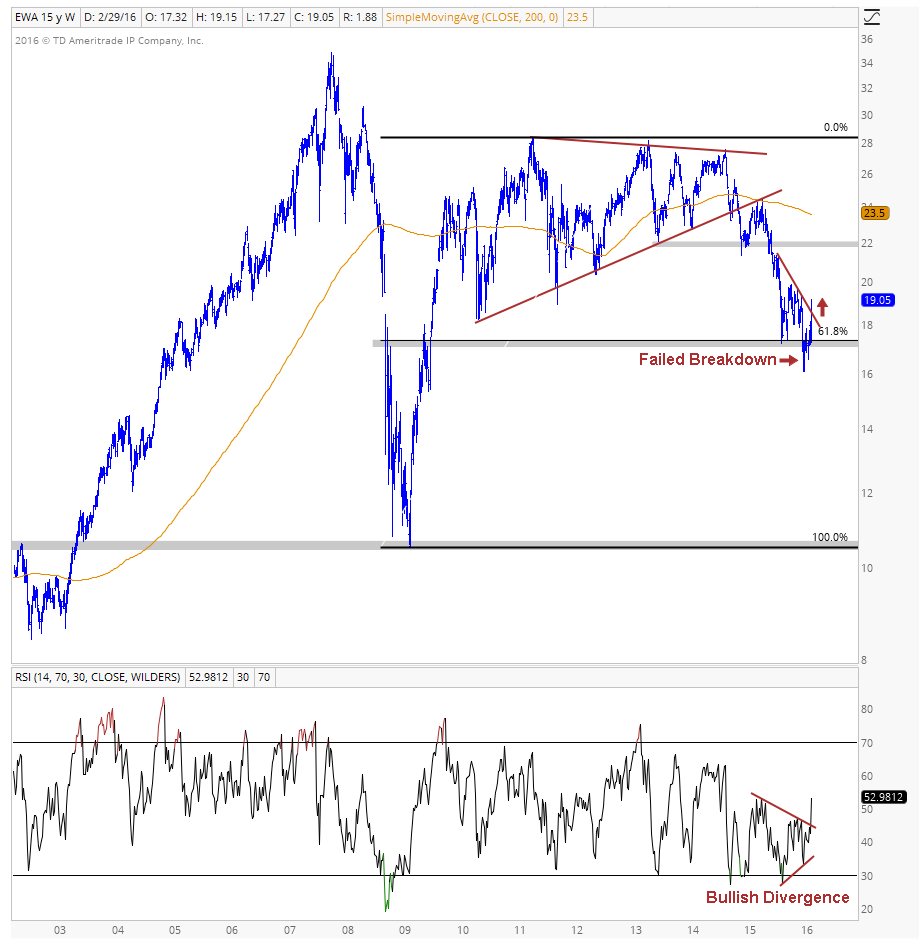 In addition to the breakout on an absolute basis, another interesting development is the breakout in Australian equities relative to US equities, as measured by the ratio EWA/SPY. 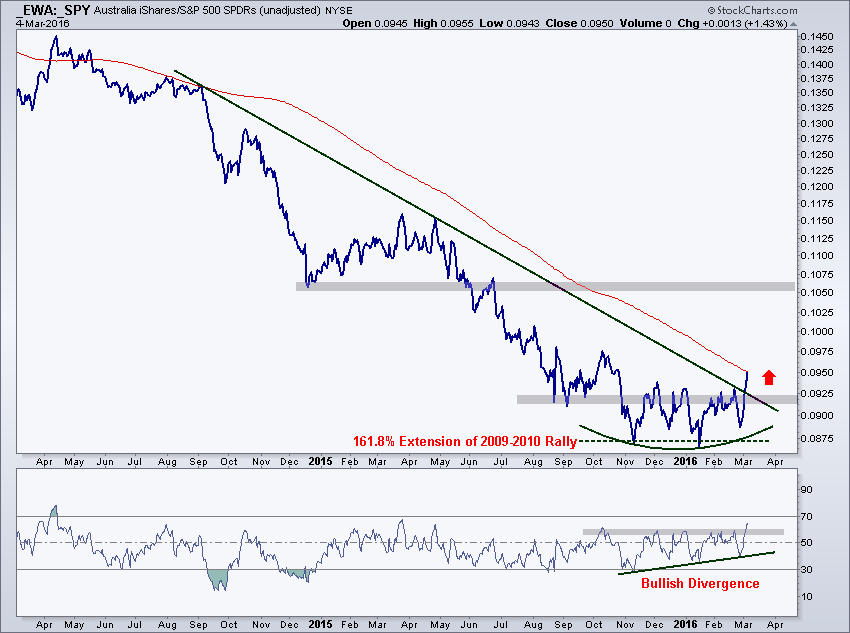 In November of last year, this ratio met its structural downside target at the 161.8% extension of the 2009-2010 rally as momentum put in a bullish divergence. Prices spent a few months consolidating and recently broke out above the top of their range, as well as the downtrend line from the September 2014 highs. As long as this ratio remains above this downtrend line I think it can head a lot higher, particularly toward the November 2014 lows outlined in gray.

The Bottom Line: The recent breakout in AUD/USD makes sense given the recent strength in areas with metals / mining exposure and should not be ignored. There are a variety of ways to take advantage of this particular theme, a few of which I outlined above. In the above cases, the risk is well-defined and probability is on our side. As I discussed above, there is still work to be done before these trend reversals fully complete, but the current developments are a significant step in the right direction.

JC here – I think all of this fits within this major theme that we’ve been pounding the table on since January = Emerging Markets / Energy / Metals. Allstarcharts Members have been all over this. I think as Bruni points out here, this trend continues.

This Wednesday 3/9/16 is our Monthly Members Only Conference Call. If you’ve been considering a 30-Day Risk-Free Trial, now is the time. We are offering a deep discount that only lasts until this Wednesday.