We just published our brand new, revised and expanded, breadth chartbook. Premium Members can check it out here.

We had over 250 charts in our internal chartbook, but cut it down to about half of that so it’s not a marathon to get through.

We cover breadth indicators from percent overbought/oversold to new highs and lows, A/D lines, and more. We do this for all the major averages as well as sector indexes.

After digging through all these charts, we’d be remiss not to share some of our favorites with you. We’ll go over some in this post.

JC joked on Twitter the other day that he is constantly hearing the word “thrust” this year.

That’s because momentum thrusts, price thrusts, breadth thrusts… you name it – have been popping up left and right since June. We’ve covered them extensively and believe that many of these extreme readings suggest a favorable long-term outlook for equities.

The fact that they continue to cluster around the same time period only bolsters this bullish development.

Well, here’s another one. This is the Russell 2000 Percentage of New 6-Month Highs. 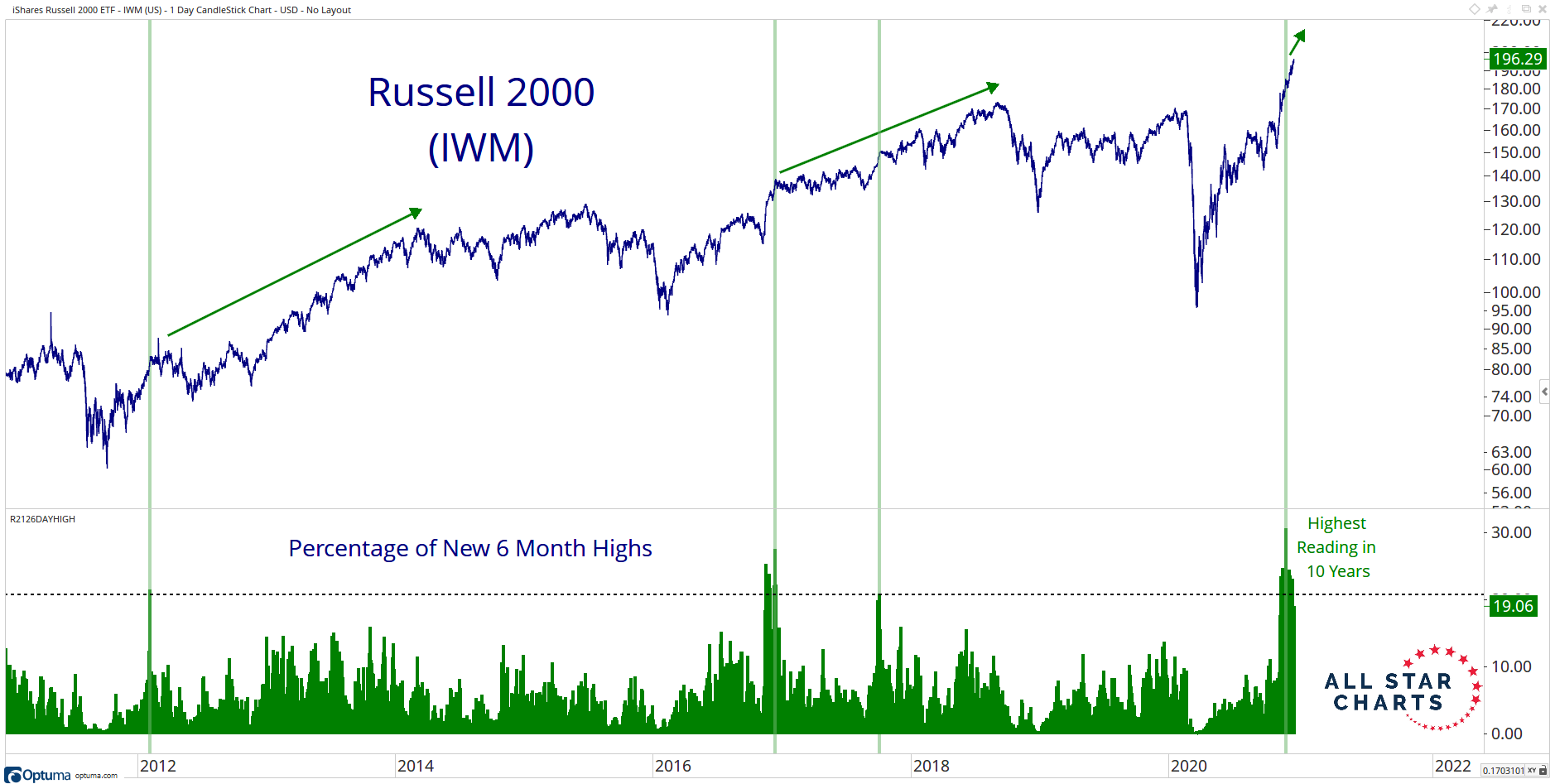 Late last month the indicator hit its highest reading in over a decade. We marked the last couple of times we had extreme readings like this on the chart. As you can see, they turned out to be excellent long-term buying opportunities.

Such a high reading is solid evidence that the recent rally to new highs by the Russell 3000 is being supported by very strong internals.

The impressive strength from small-cap stocks over the past several months is no secret at this point. Here’s a closer look, showing the Russell 2000’s acceleration to the upside recently. 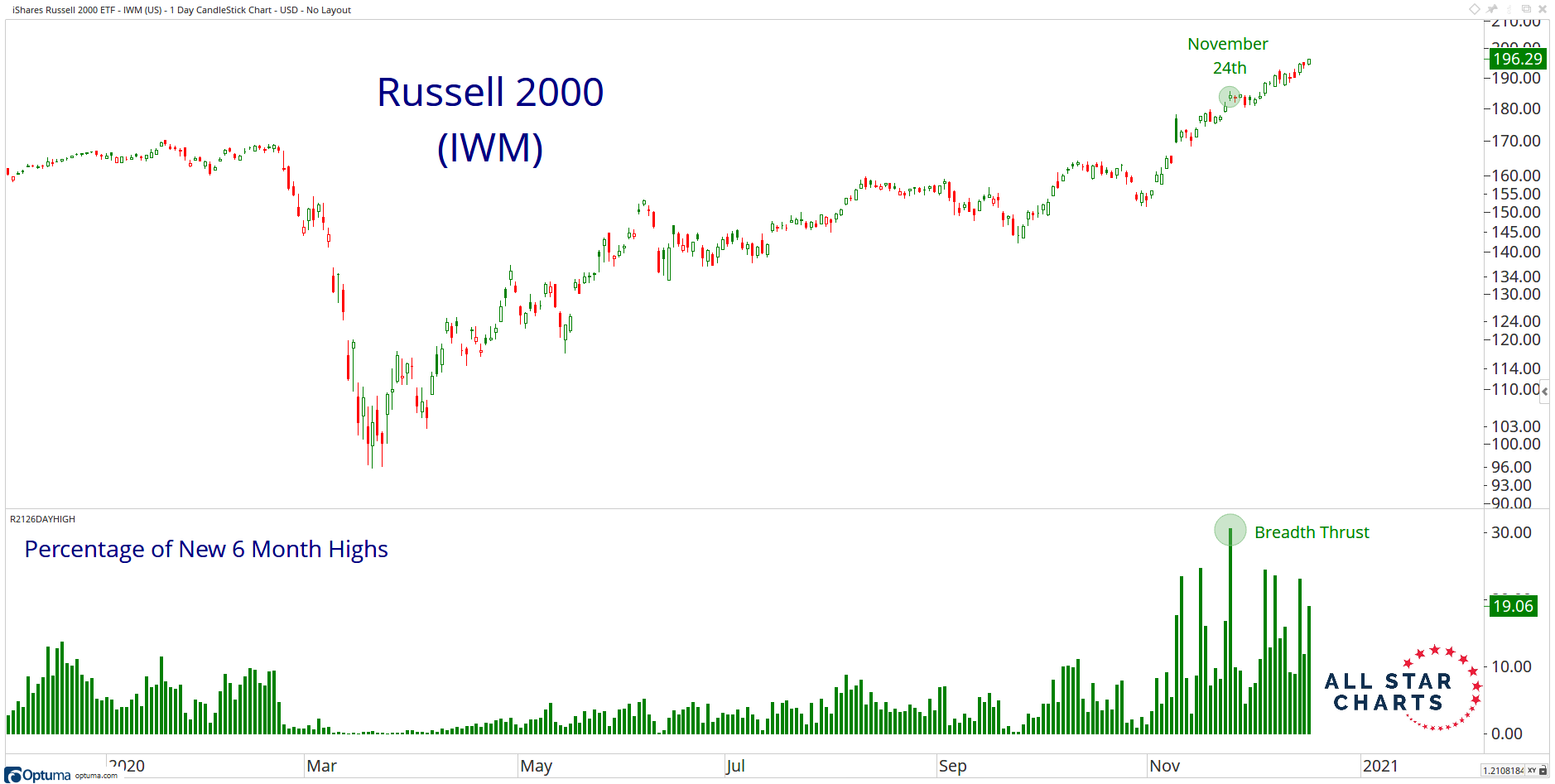 The recent spike in these readings paints a picture of expanding participation beneath the surface for small-caps. Sustained rallies must be supported by broad-based participation, and this one certainly appears to be.

While we saw breadth surges in the large-cap averages earlier in the year, it is very encouraging to see similar historic readings from small-caps now that they have taken leadership.

With that said, let’s check in on 6-month highs for large-caps now.

Where better to look than the secular leader – big-cap technology $XLK. 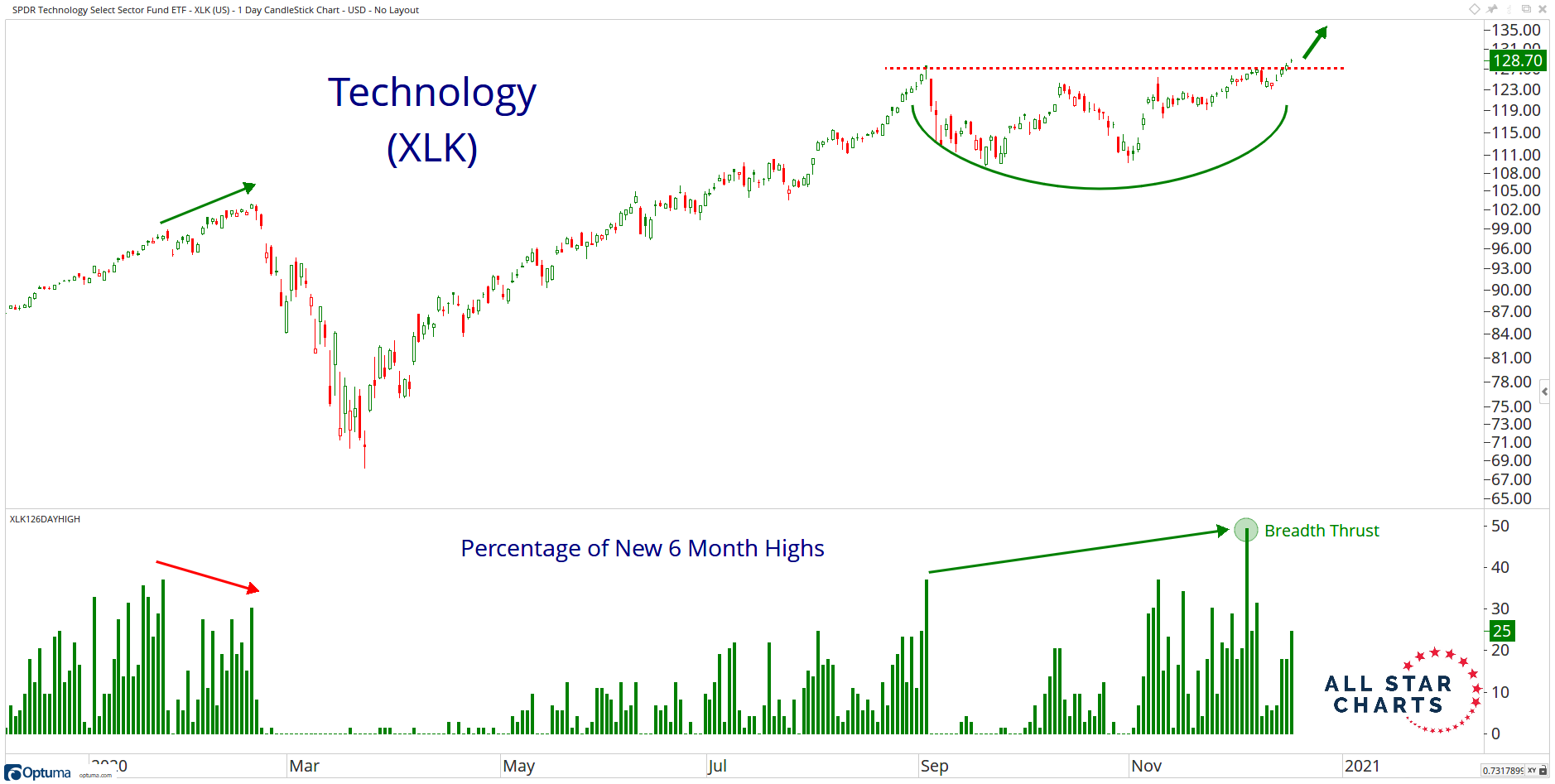 Notice that while XLK has been consolidating sideways for the past 3.5 months, with lackluster momentum and a potential bearish divergence… new highs have been moving higher among its constituents.

Price finally broke to its first record high since September 2nd this week, and we’d definitely be erring on the side of that breakout sticking considering the very positive internals backing up this sector.

It’s also not often you see a breadth thrust or extreme reading in the midst of a consolidation. They tend to occur on big up days and short-term peaks. Well, not this time.

Seeing such a bullish new high reading was as good a signal as any that this multi-month continuation pattern was about to resolve higher. 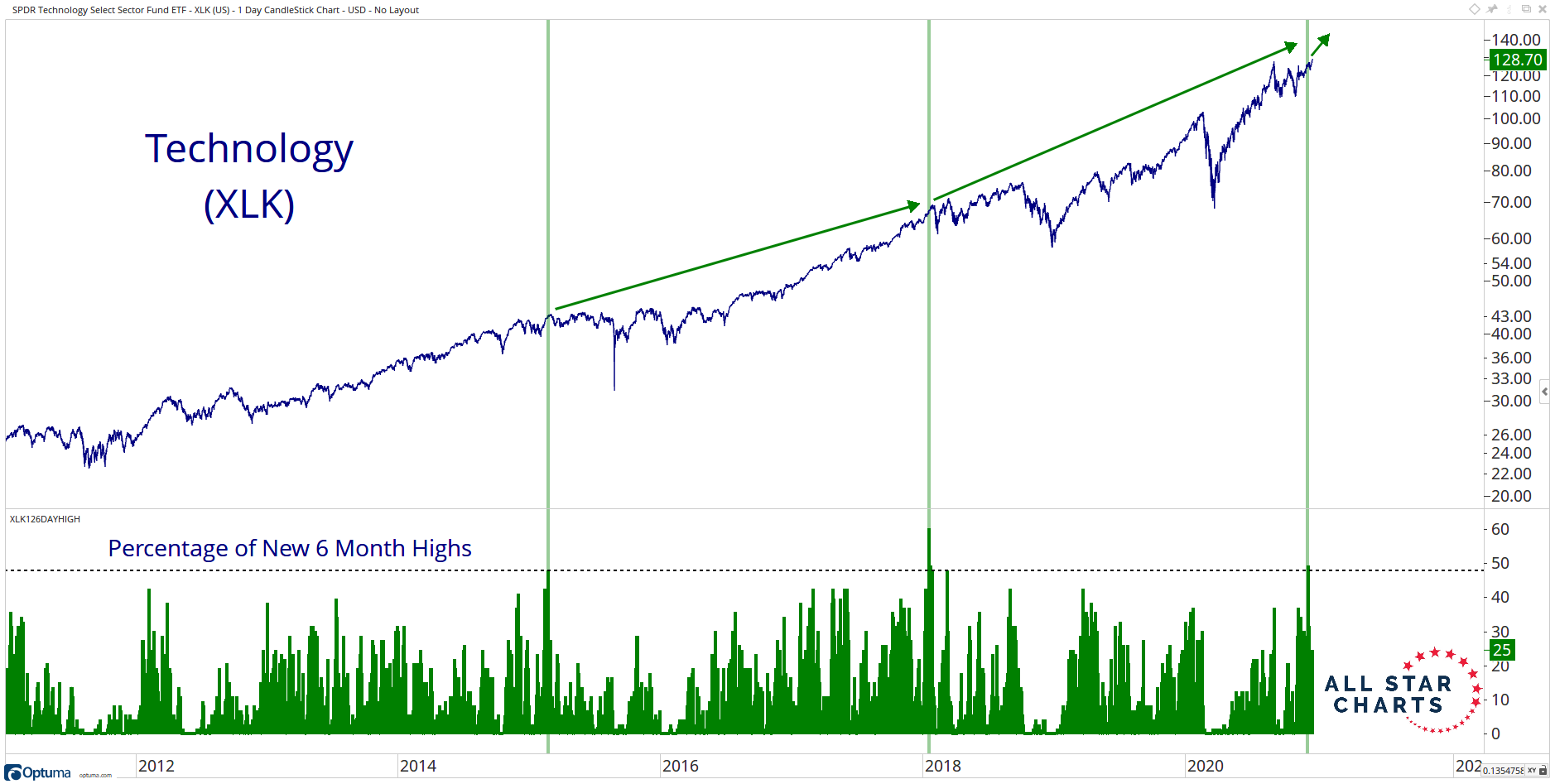 Yup… this was definitely another thrust. This is only the third time in a decade we’ve had such an extreme reading in the percentage of new 6-month highs.

The prior occurrences are marked with green vertical lines. Looking back now, would you have wanted to be a buyer or seller of tech stocks the prior two times we had similar readings?

So, what’s the takeaway here?

It’s simple – we continue to see historically high breadth readings. The types that typically occur in the early innings of new bull markets.

And we haven’t just seen a few – they have been everywhere, across cap-segments, sectors and industry groups, our internal lists, you name it.

They started with large-caps, and now that small-caps have assumed leadership we’re seeing them in the Russell 3000 now as well.

At the core of it, these extreme readings continue to signal that the market is in very good health and that the new highs, just about anywhere you look, are being confirmed and supported by very strong internals.