There are tiny little irrelevant markets everywhere like Pot stocks and Crypto Currency. These could disappear tomorrow and it won’t matter. The sovereign wealth funds, hedge funds and other monster institutions that make markets move have to be in the bond market. They’re too big not to. So if you want an inside look at the money flow from one place to another, an intermarket approach really helps.

I’ve been a lonely stock market bull for most of this year. It feels like every time I’ve told people that I think we’re closer to the beginning of a bull market than the end, they think I’m crazy. That reaction has gotten me even more bullish. Not only does price continue to suggest we’re heading much higher, but sentiment and positioning points towards the same.

I’ve made the argument that Technology is going to take us much higher, as it is just now finally breaking out above the March 2000 highs. It took 17 years to digest those 1990s gains. We’re now just moving on. All that market cap getting going is one obvious catalyst that I’ve been talking about since last year.

Another big one has to be the bond market. If interest rates get going, selling in bonds is likely to continue. That money needs a home. Stocks and commodities are likely it. First, let’s see what rates themselves are signaling before making plans on what to do. Here is the U.S. 10-year yield. This month marks the 37th anniversary of the high in rates in 1981, about 5 months before I was born. I’ve known nothing but rising bond prices and falling interest rates:

What if those 2016 lows were it? Was that whipsaw below the previous lows the catalyst to send rates higher towards 4%? I think it absolutely can be. But the one thing we do know is that we have to get through 3% before getting to 4%. If we’re holding above 3% that means we’re above the early 2014 highs and above this 37 year downtrend line. A breakout could spark a straight shot to 4%, which represents the 161.8% extension of the 2014-2016 decline and a logical target.

To continue with this intermarket theme, the cross-asset analysis, here is a closer look at the U.S. 10-year yield but with an important ratio overlaid: Regional Banks vs REITs. When the market believes rates are going higher, money flows faster into Regional Bank stocks than into higher yielding Real Estate Investment Trusts. With higher rates, there is less of a need for fixed income investors to get their yield in the stock market. If this breakdown since June reverses and gets back above the July highs (0.80) that would be a serious signal for higher rates: 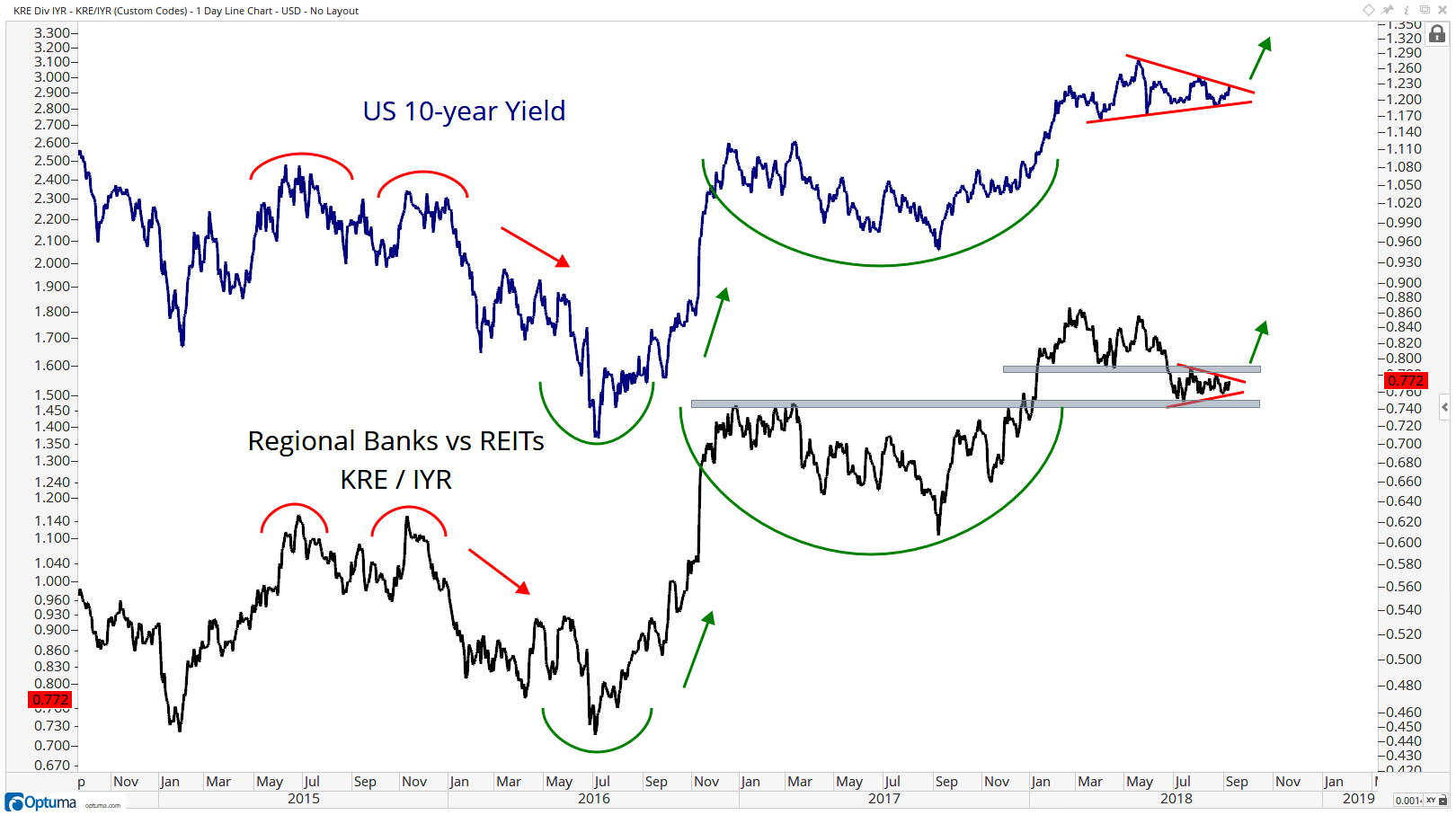 A similar ratio we monitor for rates is the Utilities stocks relative to the rest of the market. Like REITs, there is less of a need to get yield in Utilities if rates are going higher, so you tend to see Utilities underperform in a rising rate environment and outperforming when rates are falling. You can see that relationship here: 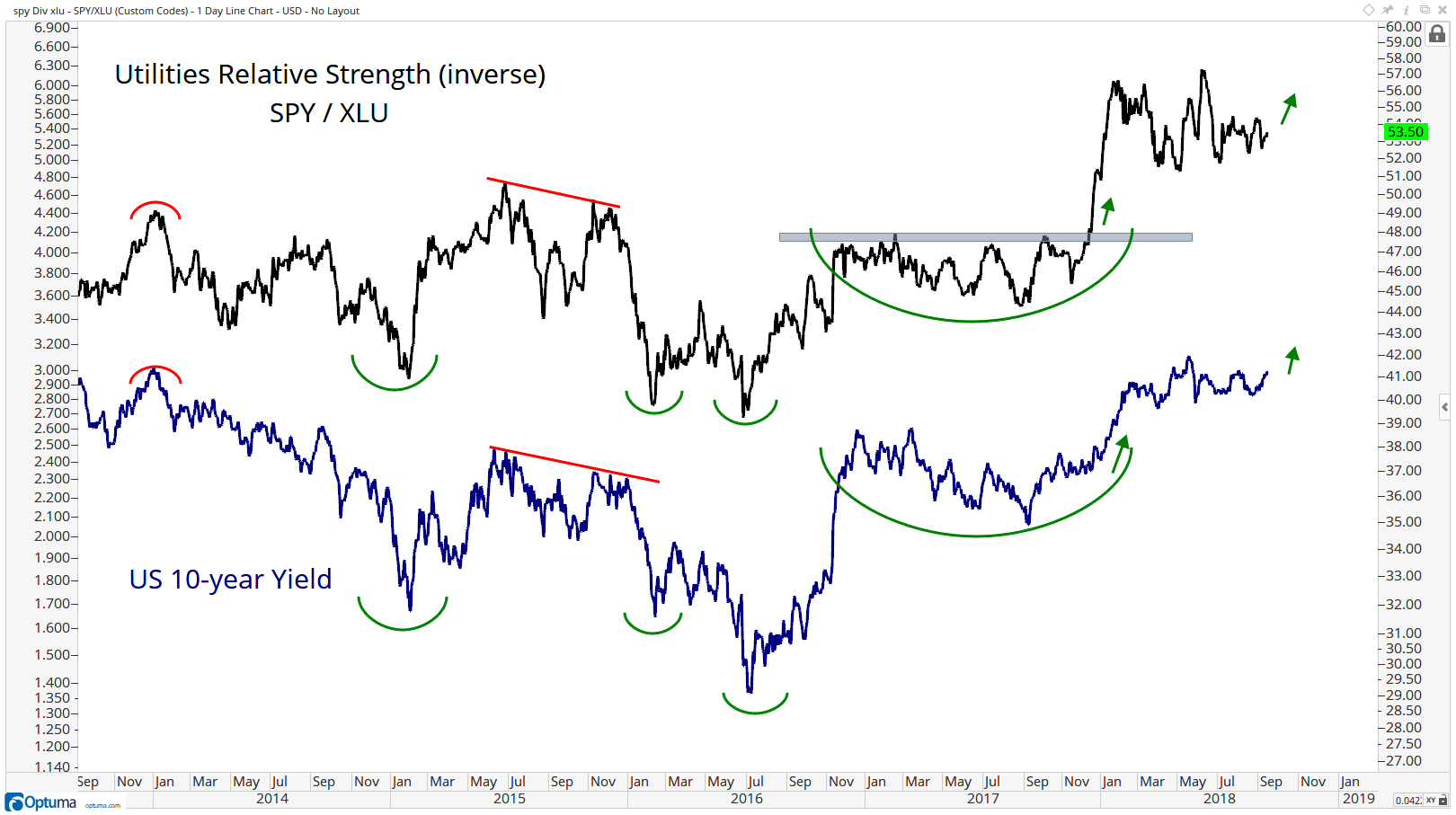 The resolution from this consolidation we’ve seen in the SPY/XLU ratio this year will be telling for sure. If the ratio starts to fall below the 2018 lows, it likely means this thesis is way off and rates are not above 3%.

We’re seeing this play out in Bond prices as well. Here is the “Stocks vs Bonds” ratio breaking out to new all-time highs. Momentum is in a bullish range and the trend here is up: 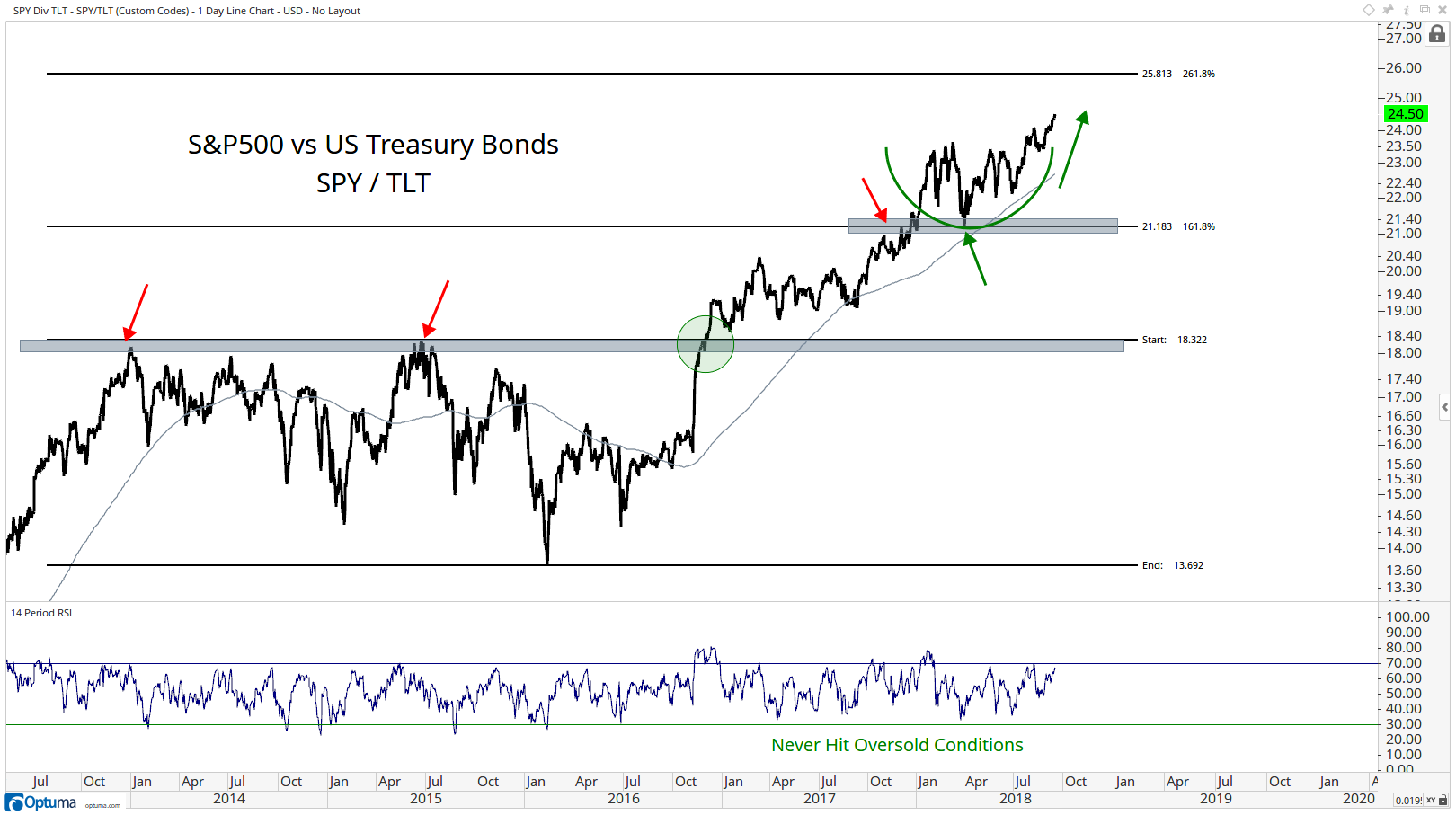 If you flip this chart upside down and back it up a couple of decades, you can see the huge breakdown at the end of 2016 and how much downside potential there is here:

Here is a long-term chart of 30-year Bond Futures. Trends are rarely this perfect for so long. In the first chart of this post, you could see the U.S. 10-year put in a failed breakdown, or whipsaw, in the summer of 2016. That sparked a ripper and could be the catalyst to send it through 3% towards 4%. The 30-year Bonds put in a similar whipsaw, failing to break out above the upper end of this historic channel: 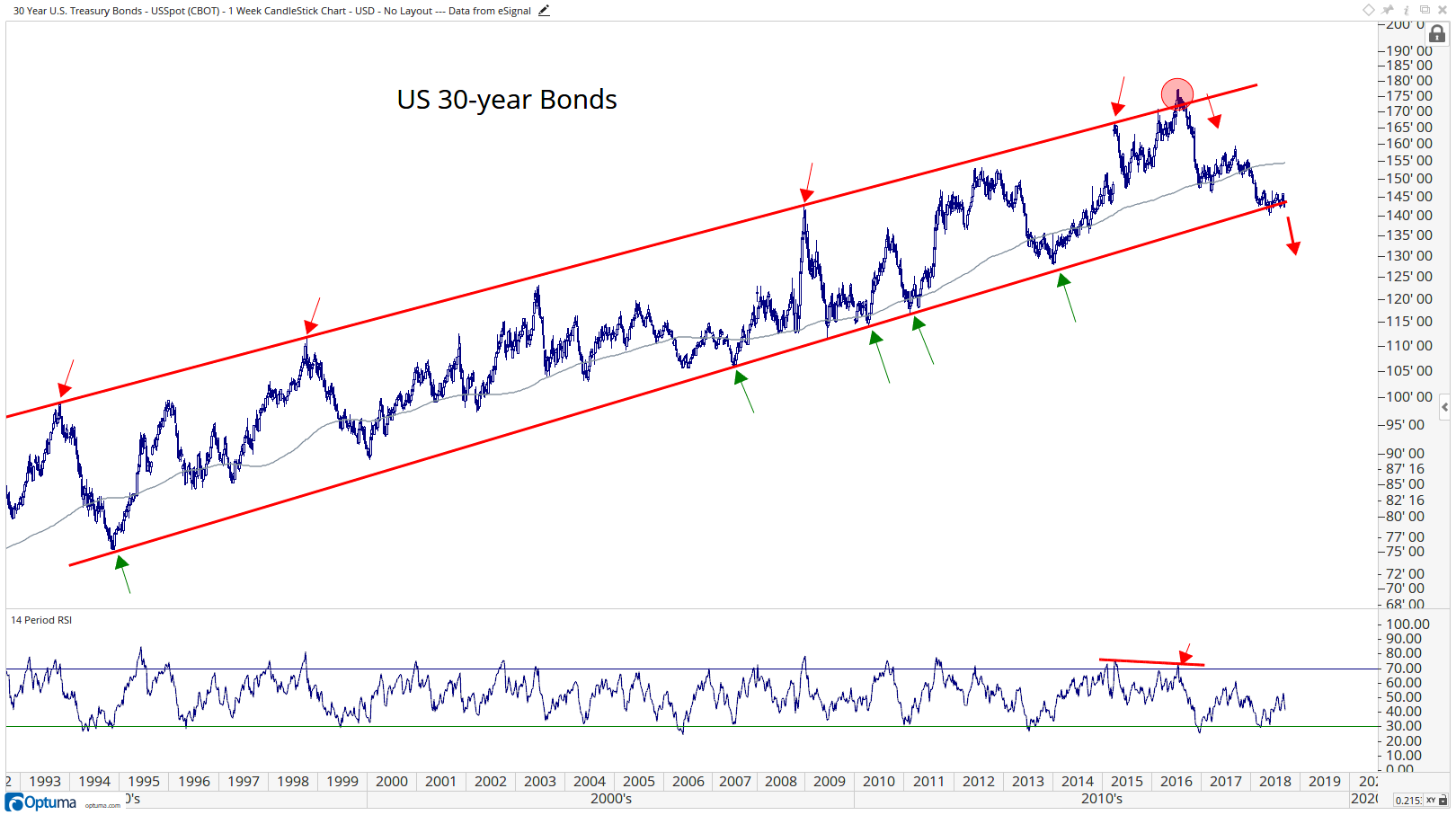 30s are flirting with an epic breakdown and it’s one we’re certainly watching. A big break here is likely to come with rates heading towards 4% in 10s. Here is a shorter-term look at the U.S. Treasury Bonds ETF $TLT. It looks to me like we’re in the process of completing a multi-year top: 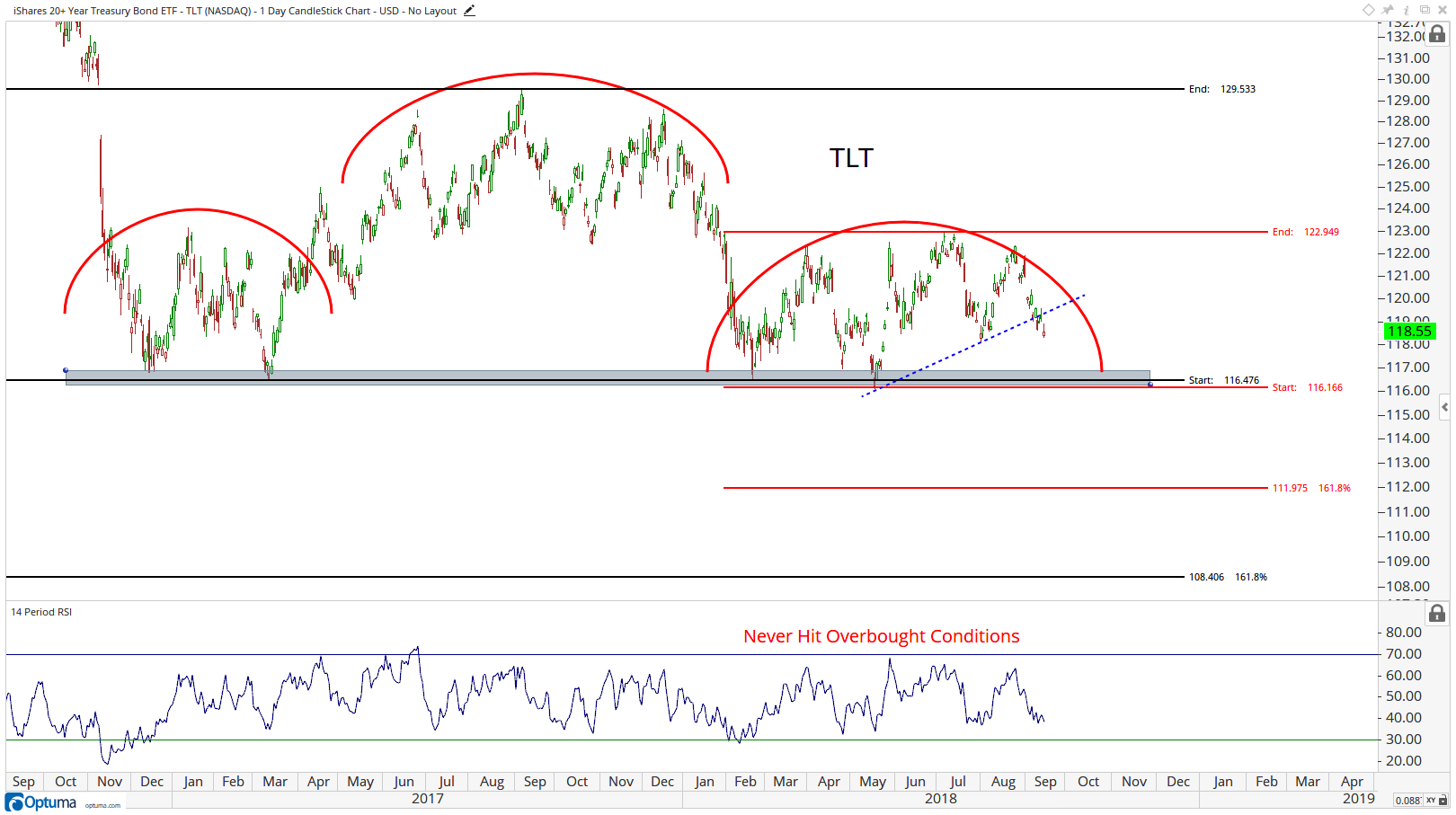 One of the things I like to do is flip charts upside down to get a view with less bias. This is how I see Bonds in an inverted chart. I’d be a buyer of that breakout: 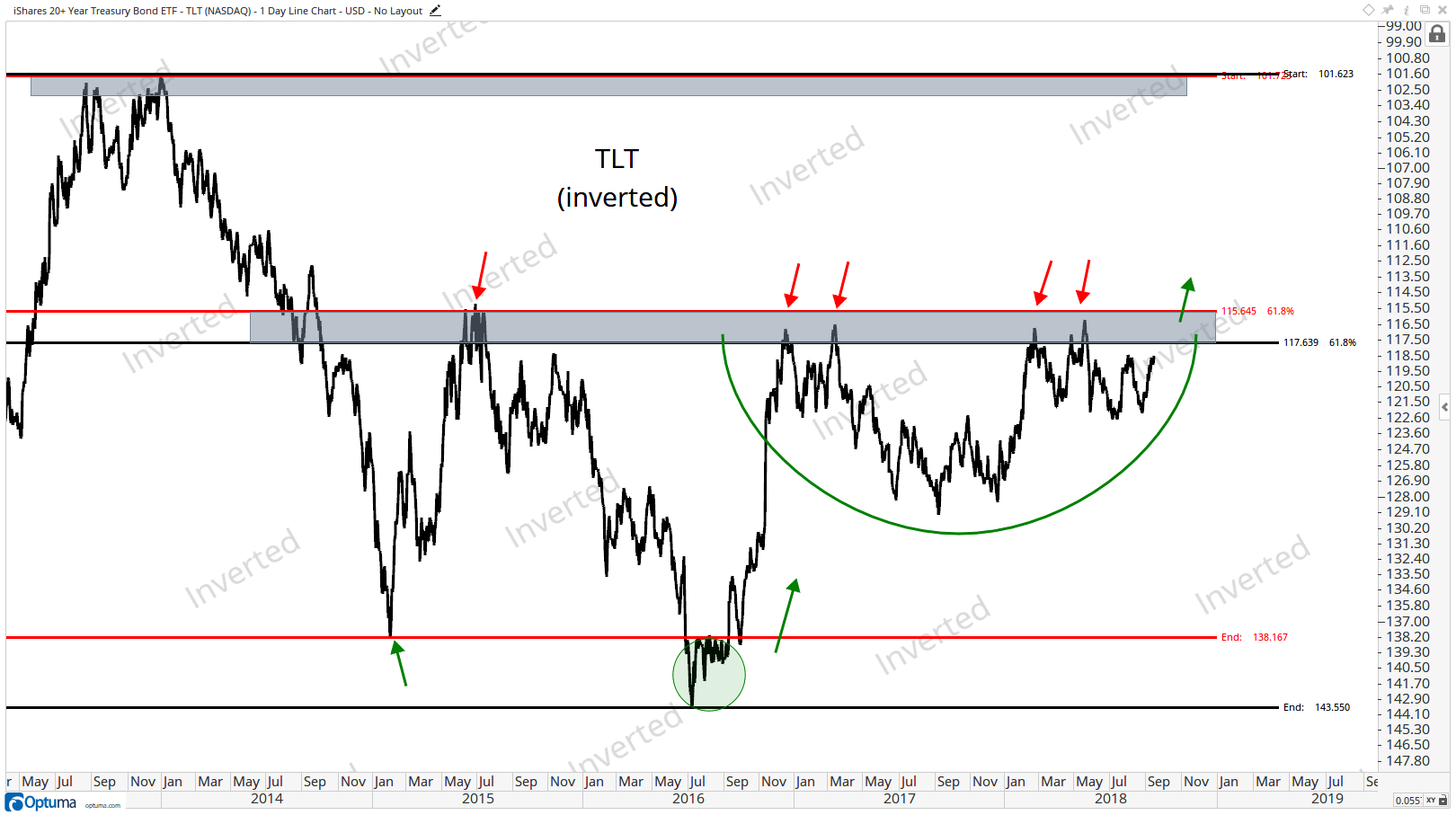 Why would rates go up? One reason would be to price in higher inflationary forces. Something we have been used to for a while is Stocks outperforming commodities. Stocks have been the place to be and this chart shows that well: 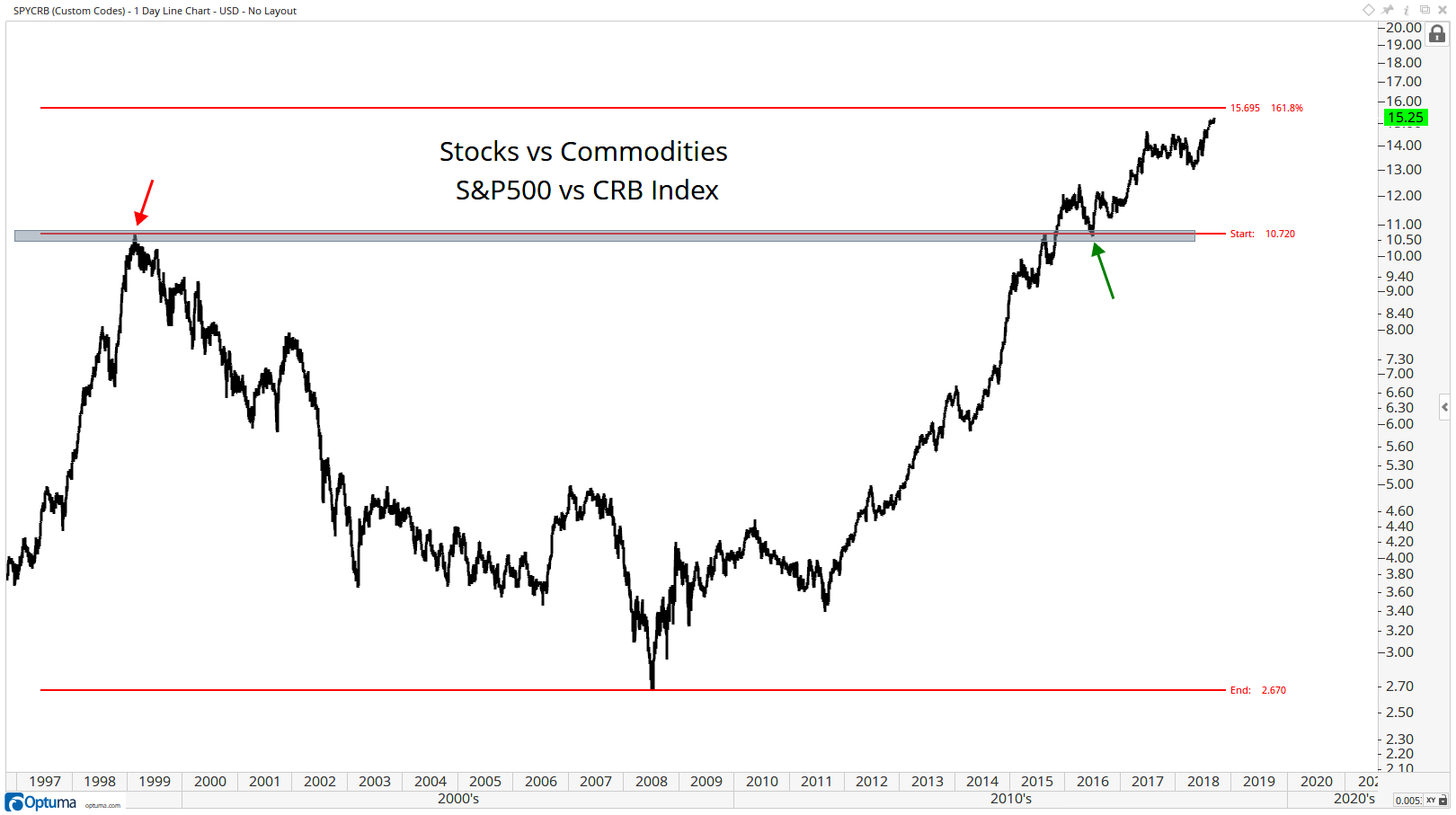 We’re getting close to achieving the next target in this ratio, which means that commodities could be at a turning point to where some outperformance is likely starting at some point in the coming months. It does not necessarily mean that stocks will fall, just that both stocks and commodities could rise together with Commodities finally showing some relative strength for a while. A rising rate environment where bond prices are falling and stocks and commodities are going up are conditions where I want to be buying stocks.

The bottom line is that rates have to get through 3 before going to 4. We’re right there. If we’re above 3% we want to be shorting bonds. Whether that is though an ETF, Options or Futures, pick your poison. We are also using this possibility for information purposes. I think higher rates is a positive for bank stocks and the market overall, at least for now. After 4-5% in 10s, historically things get a little shaky for stocks. But let’s be serious, we’re no where near that. For now, I think higher rates are good for stocks.

Let’s see how this plays out.

Ping me and let me know what you think!

Why Are You Here? Lessons From Wine Smelling Class