The financial sector of the S&P 500 has been a major laggard over the last few years and 2016 is no exception with the sector down roughly 6% YTD.

The five year daily ratio chart of XLF / SPY represents this relationship. This ratio broke down out of a multi-year downtrend channel while momentum confirmed a bearish range by moving into oversold territory. These conditions, combined with the presence of a downward sloping 200 day moving average, suggest that the under-performance of financials relative to the broader market is likely to continue. 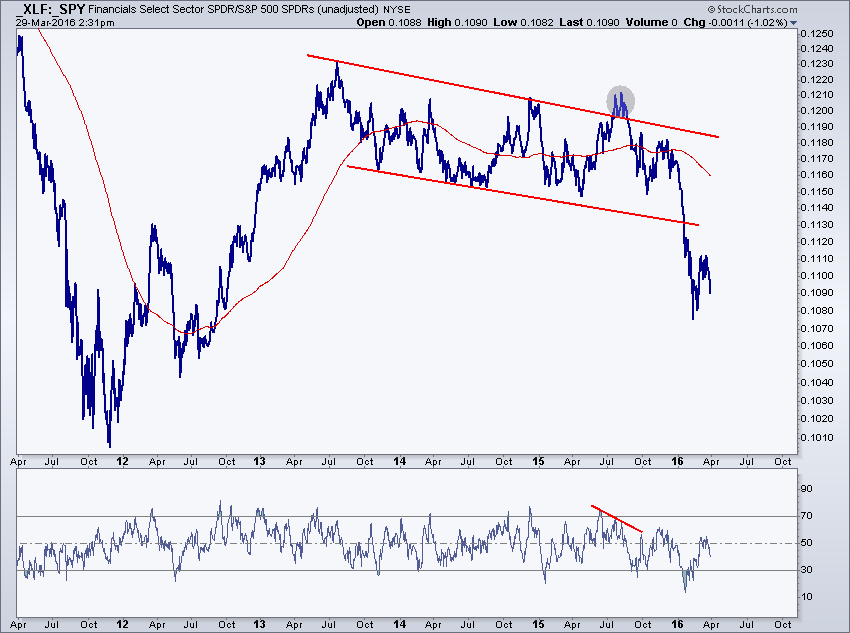 It’s been a tough environment for shorts in the US stock market over these last few months, but searching for short ideas in sectors that have lagged, like financials, makes more sense than trying to blindly short strength.

One name in this sector that looks particularly vulnerable on an absolute and relative basis is Capital One.

Structurally this stock is completing multi-year topping pattern similar to the one that occurred in 2003-2007. Prices briefly made new all-time highs in July of last year but quickly reversed as momentum diverged. The stock has since been trading below a downtrend line from those highs, while also closing below long-term support near 70-72 for the last several months. It’s also worth noting that momentum remains in a bearish range and the 200 week moving average is now beginning to roll over as well, both of which should support lower prices. 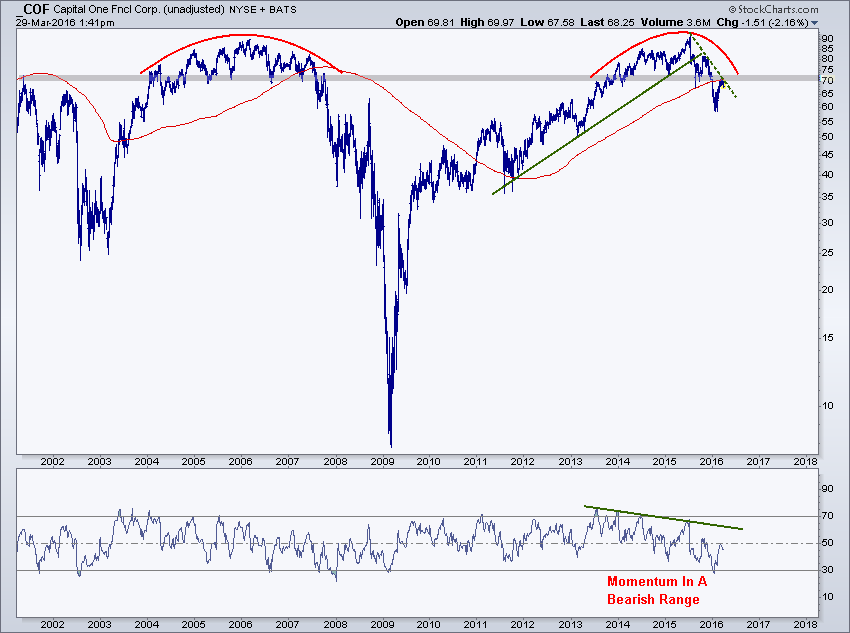 The weight of evidence currently suggests approaching this market from the short side as long as we’re below this downtrend line from the 2015 highs and long-term support at 70-72. Given the completion of this multi-year topping pattern, prices must deal with a lot of overhead supply, which suggests to me that they’ll either follow through to the downside or consolidate through time to absorb all of the selling pressure just overhead.

The daily chart provides a more tactical view of this setup on an absolute basis. After bouncing nicely with the rest of the market, prices are now testing a confluence of resistance at prior support and the downtrend line from the 2015 highs. Momentum remains in a bearish range after failing to hit overbought conditions on this recent rally and the 200 day moving average remains downward sloping. 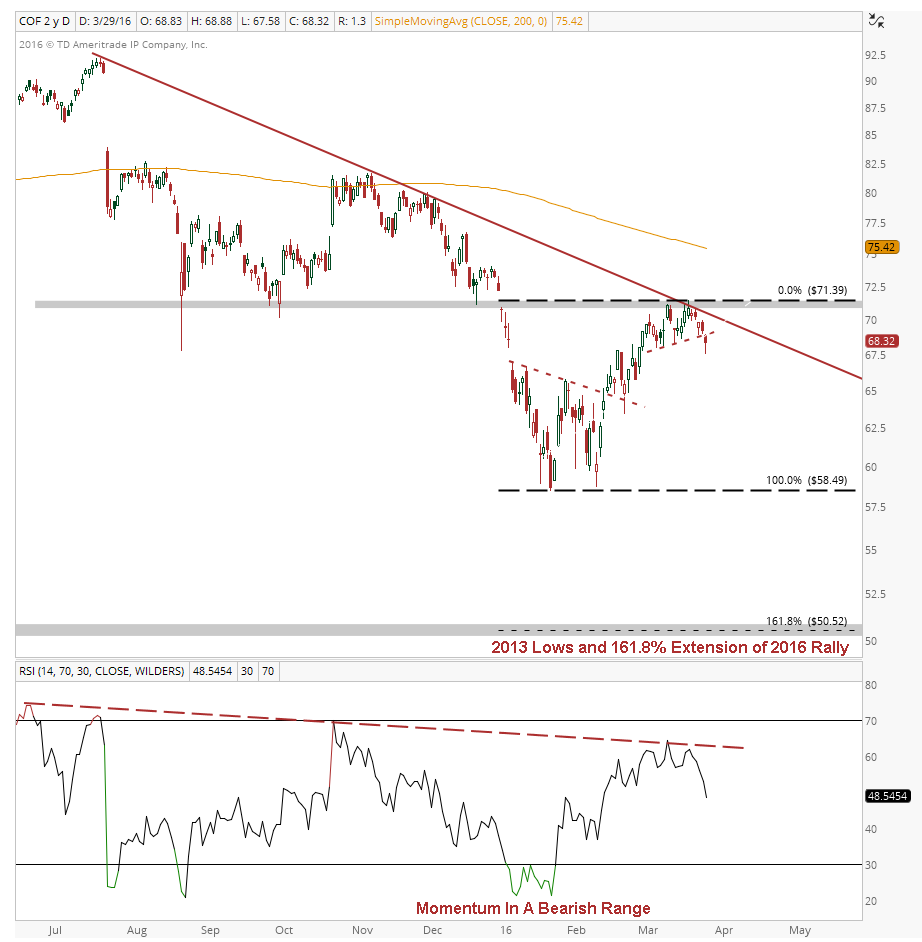 The weight of evidence suggests that tactically it makes sense to approach this market from the short side as long as we’re below this confluence of resistance at 70.75-71.50. If this market does continue lower, our tactical price targets are at the 2016 lows, followed by 50.50, which represents the 161.8% extension of the 2016 rally and the 2013 lows. If this multi-week consolidation resolves to the downside rather than the upside, that will likely be the catalyst for prices really accelerating to the downside.

Clearly Capital One looks vulnerable from a structural and tactical perspective on an absolute basis, but it also looks weak relative to the financial sector as a whole. The 6 year daily chart of COF / XLF represents this relationship.

This ratio remains in a downtrend despite the sharp YTD rally sparked by a brief failed breakdown below the 2013 lows. Momentum failed to reach overbought conditions during this rally, confirming its bearish range. Prices have probed broken support near 3.15 multiple times over the past few weeks, but have failed to hold above it and are now continuing lower. 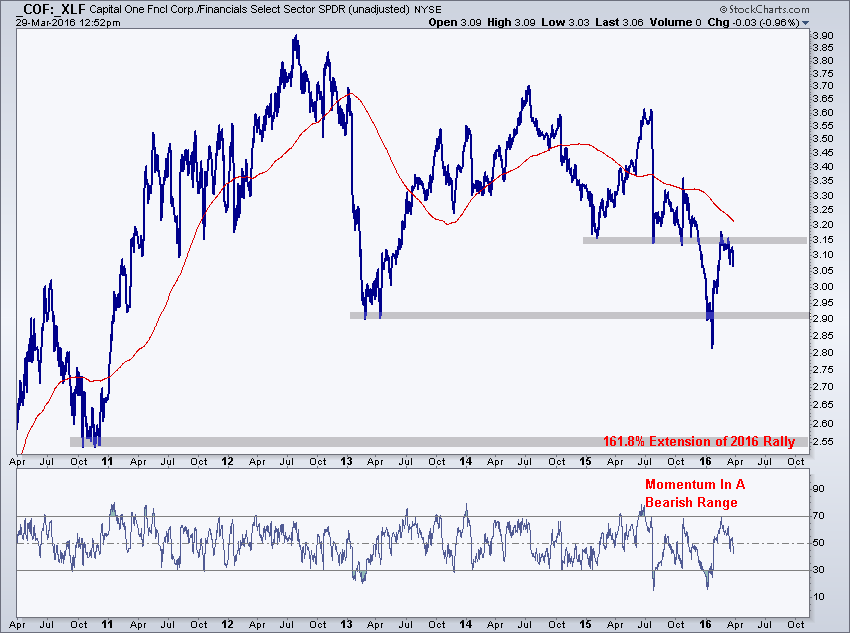 The presence of a downward sloping 200 day and momentum maintaining its bearish range suggest to me that it’s appropriate to approach this ratio from the short side as long as we’re below the 2016 highs on a closing basis. This bullish consolidation pattern resolving to the downside, rather than the upside, looks like the catalyst to reignite this long-term downtrend. Our price targets in this ratio are the 2013 lows, followed by the late 2010 lows and 161.8% extension of the 2016 rally near 2.55.

The Bottom Line: If you’re looking for short setups to take advantage of over the coming weeks and months, it’s important to make sure that you’re doing so in an asset class or security that’s actually going down. Financials have lagged the broader market for years and the weight of evidence suggests that this trend is likely to continue. One stock in this sector that looks particularly vulnerable on an absolute and relative basis is Capital One.

Structurally we want to approach this stock from the short side on an absolute basis as long as we’re below the downtrend line from the 2015 highs and long-term support / resistance at 70-72, with a price target of the 2013 lows near 50.

Tactically we only want to approach this stock from the short side on an absolute basis if we’re below the confluence of resistance at 70.75-71.50, with price targets of the 58.50 and 50.50.

Relative to the financials sector as a whole, we can remain short both structurally and tactically as long as we’re below the 2016 highs on a closing basis. Price targets for this ratio include the 2013 lows near 2.92 and the confluence of support at the late 2010 lows of 2.55.

The weight of evidence suggests that the risk/reward is elevated and the probability of success is on our side. If we’re looking to play the short side of equities in this environment, our best chance at success is to focus on those stocks under-performing a sector that is under-performing the broader market, which is exactly what Capital One provides us.

JC Here – What I agree with the most is that he is focused on the fact that if you’re going to be short anything in this market, you want to be shorting the laggards, and the weakest components of a lagging sector. Capital One definitely fits that description. If the U.S. Stock Market struggles here, which would make sense as all of our upside targets were hit over the past 2 weeks, then a tactical short position is probably best. If you’re going to be aggressive and want to be short, I like the risk vs reward proposition in this one.

Members of Allstarcharts will be updated on the development of this chart as well as other U.S. stocks, sectors and indexes. Register Here to Start Your 30-Day Risk-Free Trial