We’re watching these Corn futures very closely right here around 730. There’s a lot going on in this space and I think the daily chart for $ZC_F breaks it down nicely.

The first thing we notice is this giant symmetrical triangle that formed off the July lows and August highs. Prices in December were approaching the apex of these two converging trendlines and broke down pretty hard. The sell-off took prices below a rising 200 day moving average and down to last year’s former resistance. This level turned into new found support and Corn was able to recapture its 200 day Moving Average a couple of weeks ago. 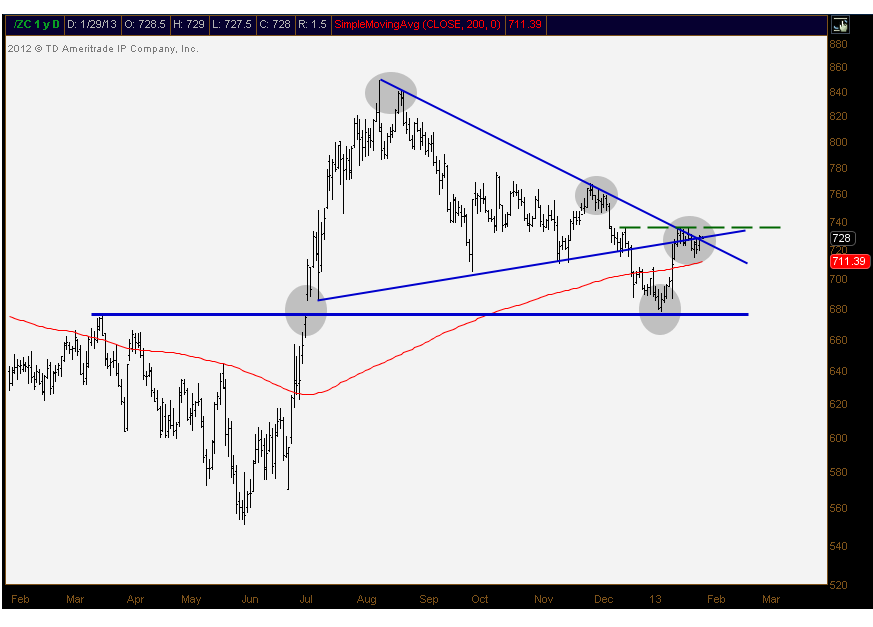 The reason this chart is exciting is the fact that we’re back up towards this 5 month downtrend line and have been hanging out here for two weeks. This is now the 4th (5th?) attempt to breakout. And the catalyst that may allow for that may just be the false breakdown that took place between December & January.

The number to watch here has to 735. A solid close above that could set the stage for a nice move to the upside. Until we see that, I don’t think there’s anything to talk about. But when something like this sets up, we have to stalk it.

Meanwhile, we’re watching the Powershares DB Agriculture Fund $DBA. Corn represents over 12% of it. Last week this ETF briefly broke below January support, only to reverse much higher on Monday. This level also represents the 61.8% Fibonacci Retracement from the June-August move. This along with the bullish divergence in its Relative Strength Index confirms some of what we’re seeing from Corn. We were pointing to this on Stocktwits Monday:

Obviously a rollover in $DBA and/or lack of breakout in Corn above 735 and there’s no trade to be had here on the long side.