That phrase is being thrown around again: “Inverse Head and Shoulders”. It appears as though one has been forming in a few of the major averages. This is typically a continuation pattern so let’s take a quick look at the S&P500:

I think it’s pretty clear – we have an important low put in just before Halloween (left shoulder), an even lower low made right after Thanksgiving (head), and finally a higher low put in before the rally that took us into Christmas (right shoulder): 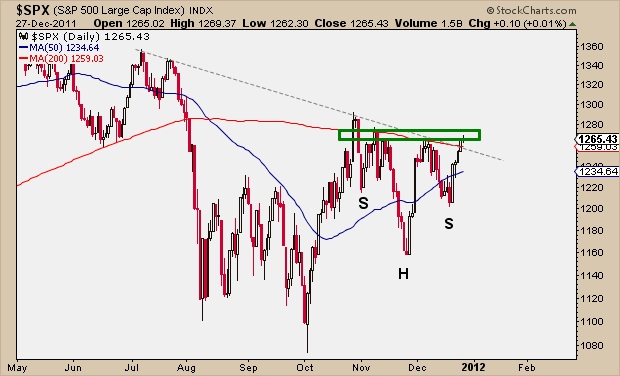 The neckline is not very clear. It’s more of a range really. A pretty wide one. This makes it more difficult to confirm a breakout. The downtrend line that goes back to early July was broken last week, so that is probably the level that we want to watch here.

Another problem is the lack of volume. It is so hard to have conviction in such an important event like this if it occurs during a week where the market just drifts higher on next to no volume. In a situation like this I would almost expect whipsaws. I wouldn’t be shocked to see some more consolidation over the next few weeks before a clear breakout to the upside.

One positive that I’d like to note is the amount of tests of this downtrend line that we’ve seen since July. We are going on 5-6 tests of resistance now, with the most recent tests coming a) more frequently and b) off more shallow sell-offs. We say it all the time, the more times that a level is tested, the higher the likelihood that it breaks.

This is a really important level and the action that we’re seeing should not be taken lightly. We’ve been watching this area for a long time. Remember this? From Edwards & Magee: “here is the interesting and the important fact which, curiously enough, many casual chart observers appear never to grasp: these critical price levels constantly switch their roles from Support to Resistance and from Resistance to Support. A former Top, once it has been surpassed, becomes a bottom zone in a subsequent downtrend; and an old Bottom, once it has been penetrated, becomes a Top zone in a later advancing phase.”

That former support in the S&P500 is still giving us trouble. The breakdown that occurred in August was devastating. We’re now going on 2 months of battle with that former support (now resistance) and still no penetration. 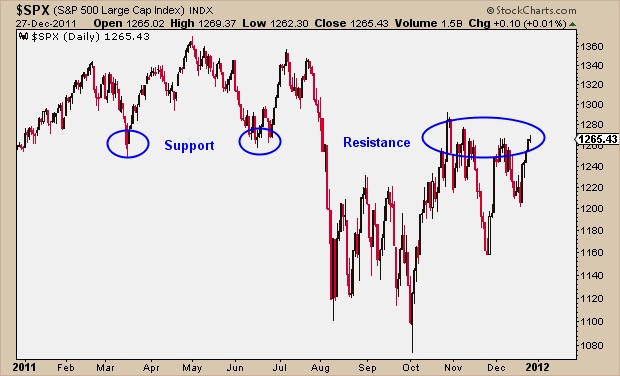 I don’t think that this inverse head & shoulders pattern is cut and dry. The timing of a potential breakout here makes it more difficult to navigate. I would expect some more consolidation before a big move higher can evolve. We live in a market environment where false moves and whipsaws are the norm. I don’t think that’s changed. And it’s a good thing – this shouldn’t be easy. But with this sort of price action, tremendous risk/reward opportunities develop and with good risk management there are nice profits to be made.