The S&P 500 fell 3.8% this week, ending its worst week in nearly two months. I can’t say that it’s all that surprising to see stocks struggle at this level. Major support was violated in early August that is still haunting the bulls today. We’ve talked about it a million times but let’s look at it again. In addition, there is now quite the battle going on here as the S&P500 is stuck between the 50 and 200 day moving averages: 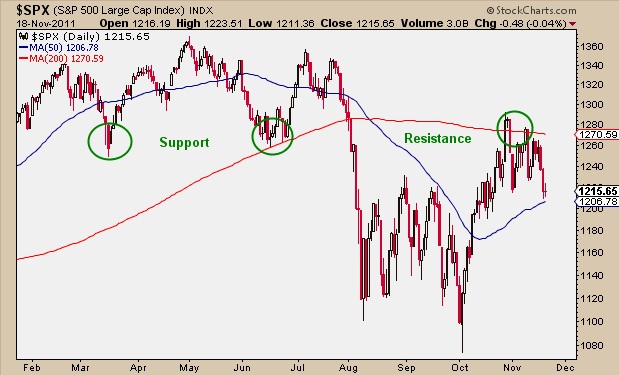 I’m still in the camp that the recent pullback in stocks is just recognition of this resistance from former support and not the start of something bigger. But let’s keep in mind that it takes time to break through. It’s not going to happen overnight. Meanwhile, I wanted to share some thoughts on this subject by some of the technicians that I respect most:

Carl Swenlin – President of Decision Point: “The market just failed a test by breaking down out of the triangle formation, but the technical damage is not serious, and a decline to the 1175 area to clear intermediate-term overbought conditions could be absorbed without major technical damage being done. On the other hand, if the ultra-short-term oversold spikes have produced sufficient internal compression, yesterday’s breakdown could prove to be the final shakeout preceeding a new rally. In any case I view the recent decline as a correction within the rally that began in October”

Brian Shannon – President of Alphatrends.net: “We’re Still above the 38.2% retracement in $SPY at about 121. A 50% retracement would bring us down to about 118.40. So next week we need to look at it as we’ve broken some support, and that support acting as resistance in the intermediate term time frame with a declining 5-day moving average. And we’re going to need to at least heal through some time before this S&P500 can be back in a position where maybe we’re going to see a year-end rally. But right now it’s really starting to look a little bit shaky”

Mary Ann Bartels – Technical Analyst at Bank of America Merrill Lynch: “The market has tried twice to break the 200-day on the upside at 1271 and failed. That’s a negative technical sign. The next test will be at 1200…..1200 had been a level of resistance in September and then became a level of support in October with the S&P bouncing off the key psychological level on October 17th. As both a key technical and psychological level, whether the market bounces or breaks at 1200 – will likely inform the next big move…..a break is the more likely outcome because volume has been strong on the move down (something she considers confirmation). And if we break (charts suggest) the S&P will test a range between 1150 and 100 with 11oo the lowest close of the year…..However, that’s not to say there’s no chance of a rally – there is. Some kind of resolution in Europe could send bulls off to the races. We’d have to get above the 200-day at 1271 – but if we do, then the market could track up to 1350. There’s certainly plenty of cash on the sidelines that could propel the market higher.”

Robert Sluymer – Technical Analyst at RBC Capital Markets: “Our expectation is that the recent market selloff is not the beginning of a whole scale, multimonth downside collapse, but rather is likely the latter stages of a pause following a surge in October, and another upside rally attempt will develop shortly……The overall technical set-up has not materially changed in the past few weeks……As risk assets begin to pull back or pause, many are quickly moving back to important trading support near 50-day moving averages. This sets the stage for another rebound to develop in the coming few days or week.”

Jeff deGraaf – Partner at Renaissance Macro Research: “The range of outcomes is so large at this point (bullish and bearish) that confidence levels in predicted outcomes have been reduced. That forces us to play with smaller position sizes…and a more tactically driven outlook.”

Complacency is the Enemy (Alphatrends)

Wall Street Week Ahead: A Rally Could Happen But Some Big “Ifs” (Reuters)

Puzzling Over a Market’s Thrusts (Barrons)