You guys who have followed my work over the years know how many charts I look at on a daily and weekly basis. Believe it or not, it’s probably even more than you think. Some things pique my interest more than others, of course, but it’s the collective weight of the evidence that allows me to formulate a thesis given all of the available information. The specifics include price and sentiment data from stock, bond, commodity and forex markets around the world, most represented visually in chart form.

Sometimes there is a specific scenario in a given market that can impact the direction of the price of a lot of different assets around the world. Today, what I see in US Treasury Bonds is what I find to be the most interesting trade in the world. What is happening in this market? Is this a top in bonds and bottom in rates? Is this multi-decade uptrend in bonds finally coming to an end? It’s hard to imagine considering you need to be older than 60 to remember a structural bear market in bonds during your wall street career.

The chart that I think we need to start with is the benchmark 10-year US Treasury Note Yield, just so you can put things in perspective. Here you can see the top in 1981 and the recent undercut in June below the Summer 2012 lows. With a bullish momentum divergence at those new lows and a failed breakdown resolving higher, my trained eye makes me think higher yields: 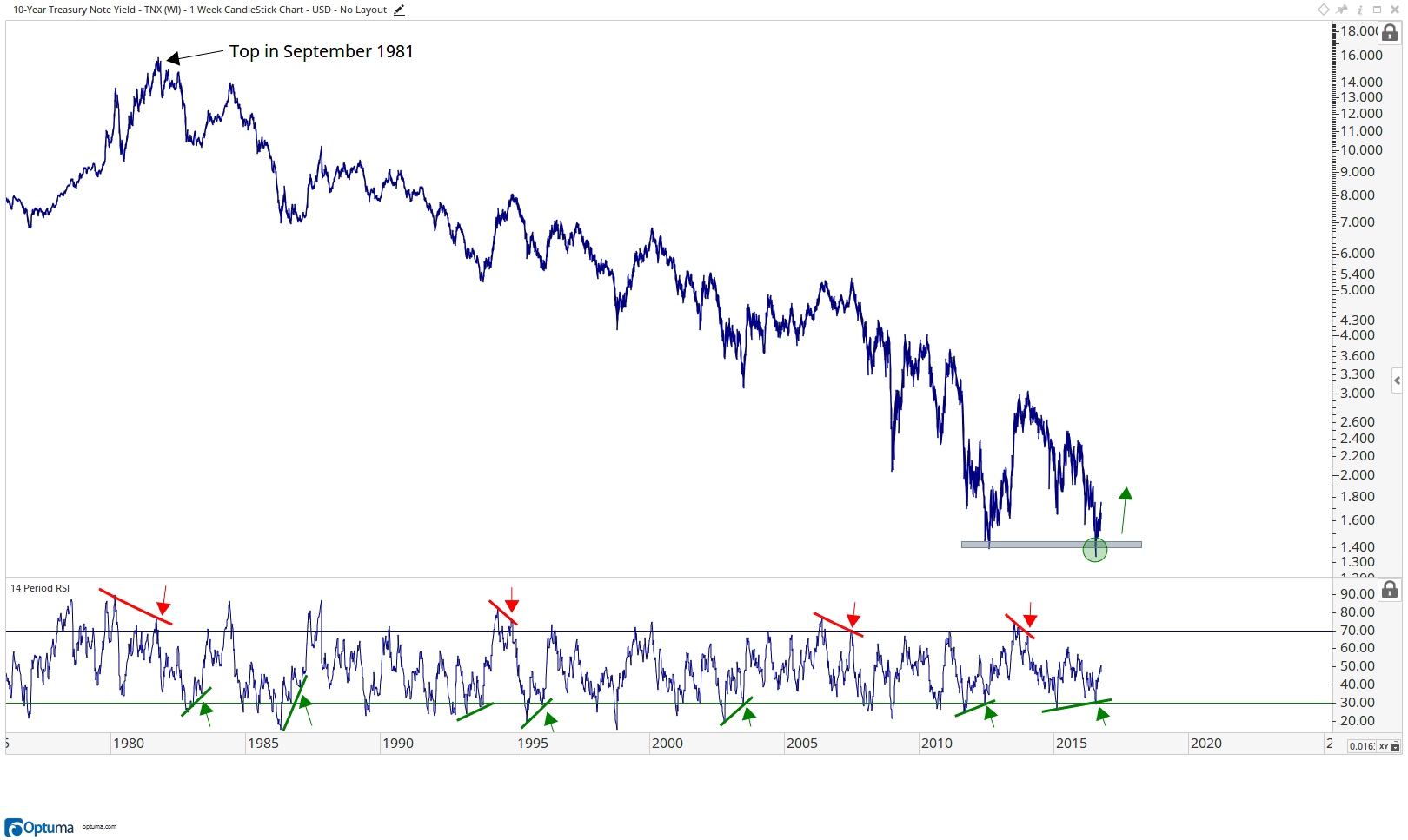 Here is a closer look at those 10-year yields. This is a daily candlestick chart with the same momentum indicator below (14-period RSI). In early June, 10-year yields completed a 4-month consolidation resolving lower from that range. This gave us a target down under 1.4% based on the July 2012 lows and the measured move target from the amplitude of the 4-month range: 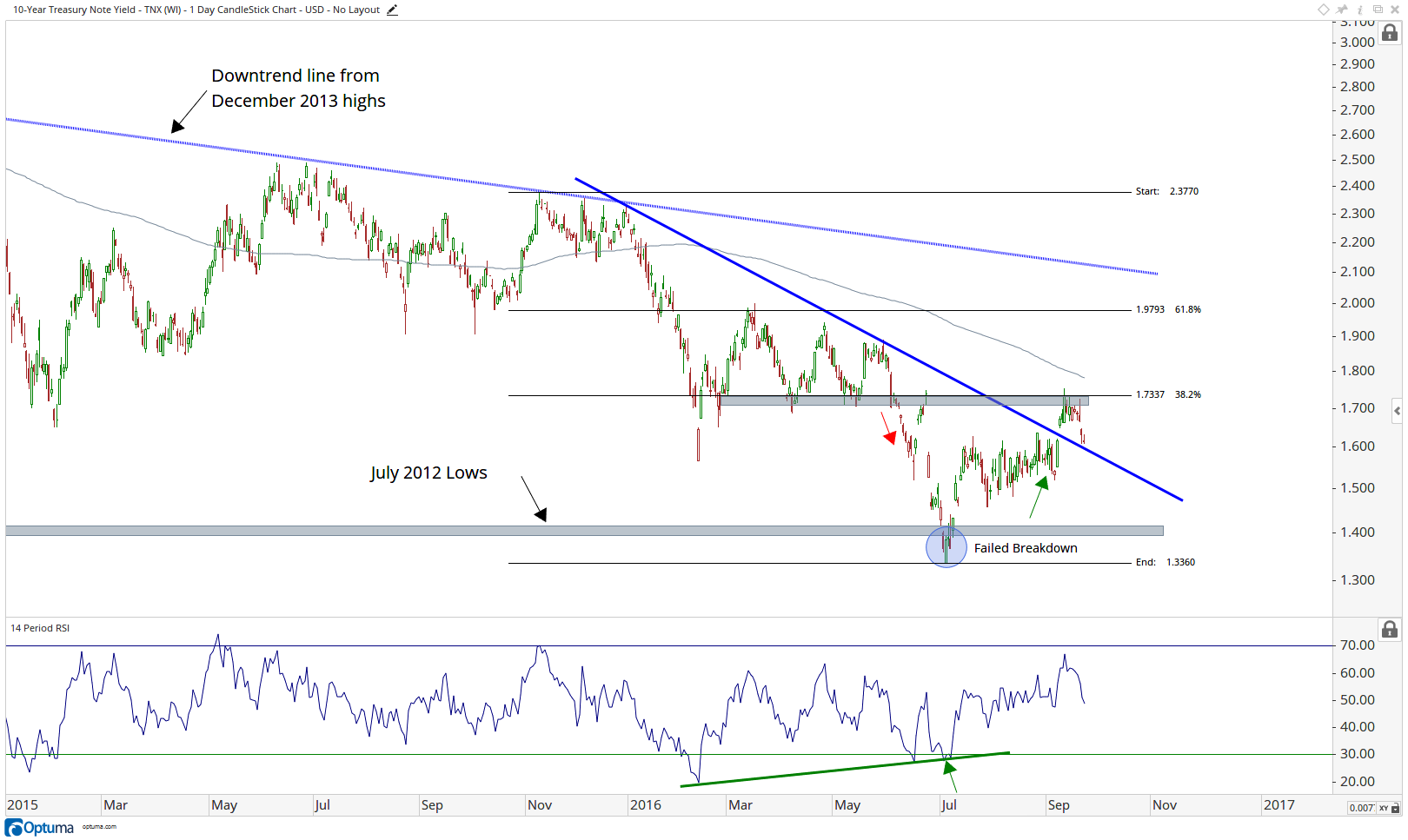 Not only was that target achieved, but it broke briefly below that, as seen in the longer-term chart above. Meanwhile, momentum once again here, on a shorter timeframe, diverged positively, putting in a higher low while yields made a lower low. This became the catalyst to spark a rally in rates after the 4th of July. Our targets were 1.73 based on former support in the 2nd quarter as well as the 38.2% retracement of the entire decline from the Fall last year. But that was hit a couple weeks ago.

So here we are. The bullish news is that yields are above the downtrend line from last Fall’s highs.  This along with the bullish momentum divergence and failed breakdown, on multiple timeframes, has suggested erring on the long side. The bearish news is that yields are below a downward sloping 200 day moving average which puts this still in a downtrend from any kind of intermediate-term perspective. Also, momentum has not hit overbought conditions (above 70), during this rally, which is a bearish characteristic. Momentum when price is in uptrends gets overbought on rallies.

So this is what has me stuck in the middle and forcing me to err on the larger timeframe. So here is a chart of 30-year Treasury Bonds going back to the early 90s. Remember that mortgages are tied closest to these bonds’ rates: 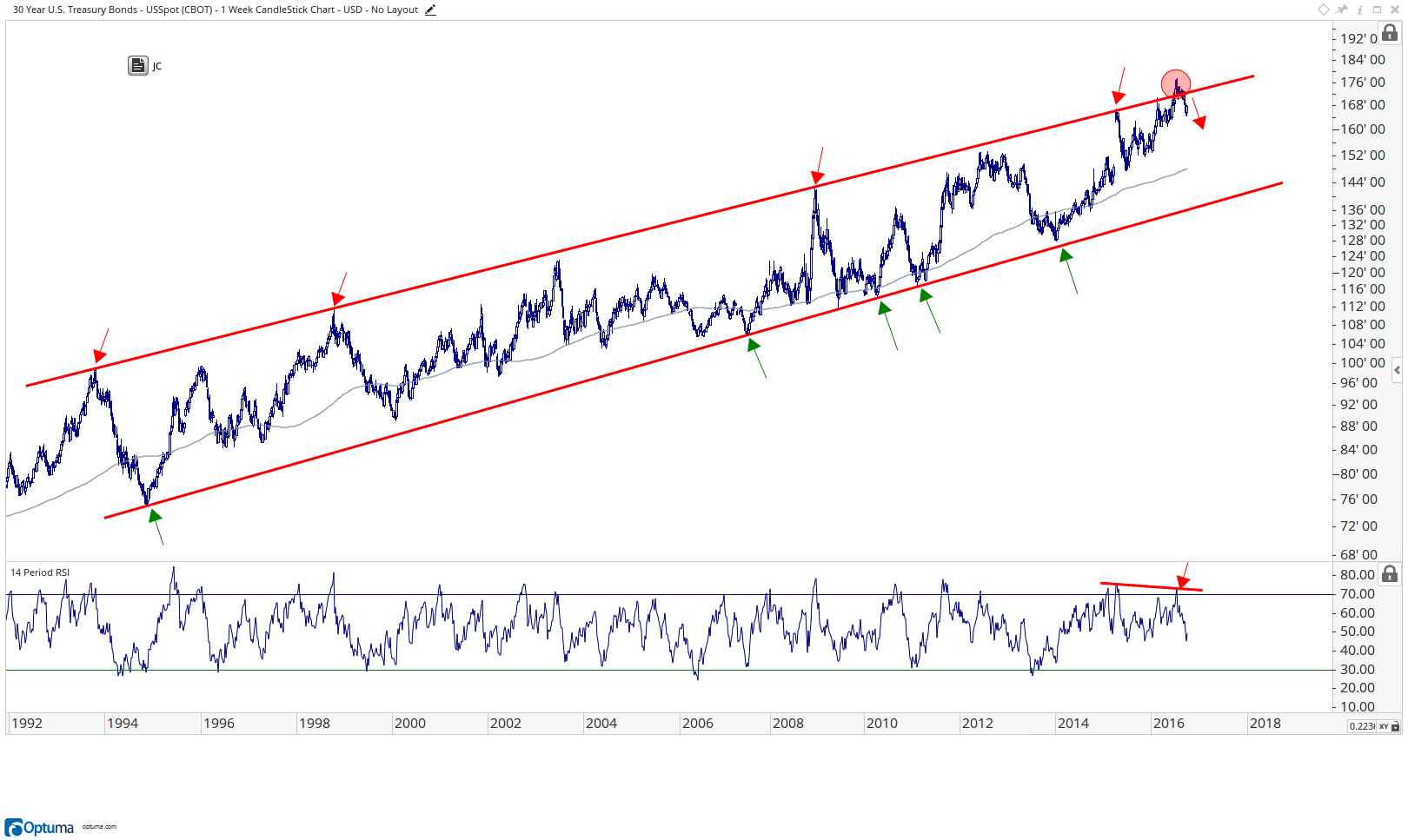 The way I see it we’re coming off the upper end of this massive uptrend channel from 1993. The failed breakout through the upper of the two trendlines and quick reversal lower suggests to me that there is more selling to come. Notice the bearish momentum divergence during that failed breakout.

This is the opposite of what we’re seeing in interest rates, which makes perfect sense. Now finally, the $TLT is probably the most popular Treasury Bond ETF out there. It’s really liquid in both the common stock and the options. Here’s how I see it: 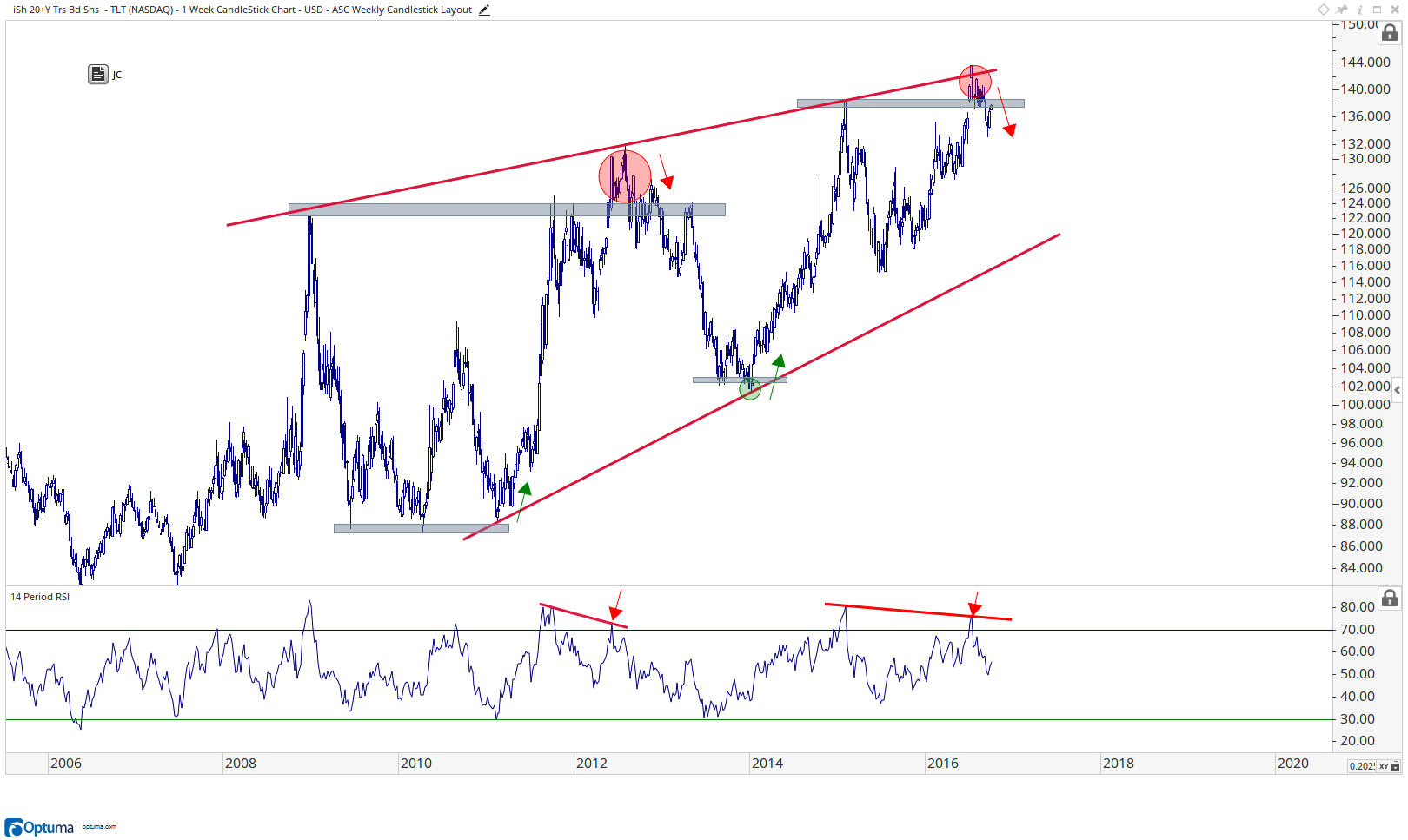 Looks to me like we got to the upper end of these two converging uptrend lines. It failed to hold the breakout and momentum diverged negatively. The idea has been to be short if we were below the upper of the two uptrend lines, but more recently I think it just makes more sense to only be short if we are below the early 2015 highs. There could be a long way to go to the downside.

Shorter-term, the $TLT bounced a couple weeks ago near 132 from what was former resistance in the 1st quarter as well as in early 2015. I would argue that all of the support that broke on September 8th should turn into some overhead supply. But while we’re still above an upward sloping 200 day moving average and above former resistance from the past 18th months, it puts it right in the middle. 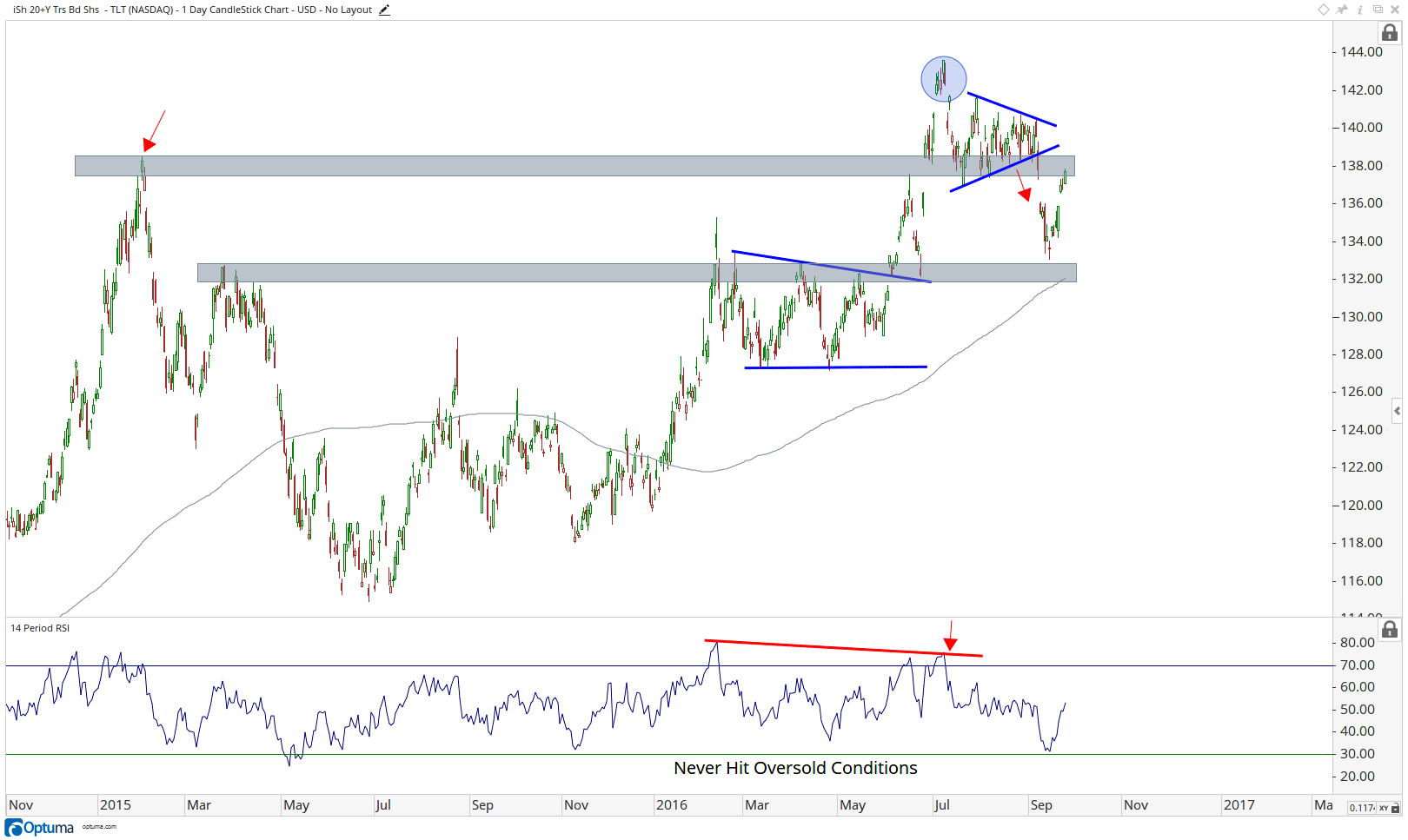 This makes it a difficult trade. To me it still looks like a fade. But I’m open minded.

Here is Gold relative to US Treasury Bonds. To me it looks like a nice bottom and poised for a breakout, which suggests owning gold and selling bonds: 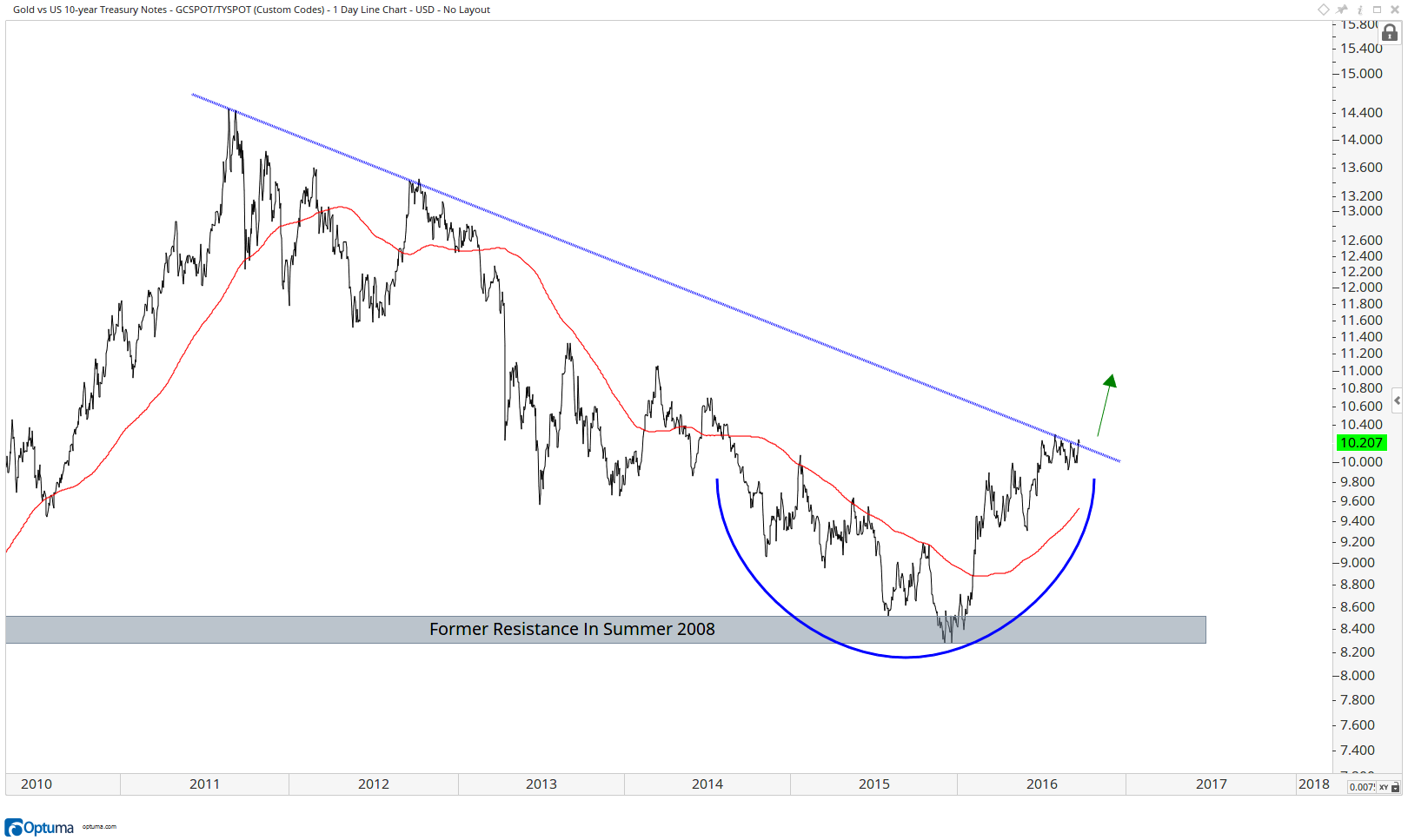 Here is the S&P500 vs US Treasury Bonds. The way I see it, we’re above the March 2000 highs and above a downtrend line from last year’s highs. With momentum in a bullish range I think the benefit of the doubt here still has to go to the bulls, which suggests buying stocks and selling bonds. 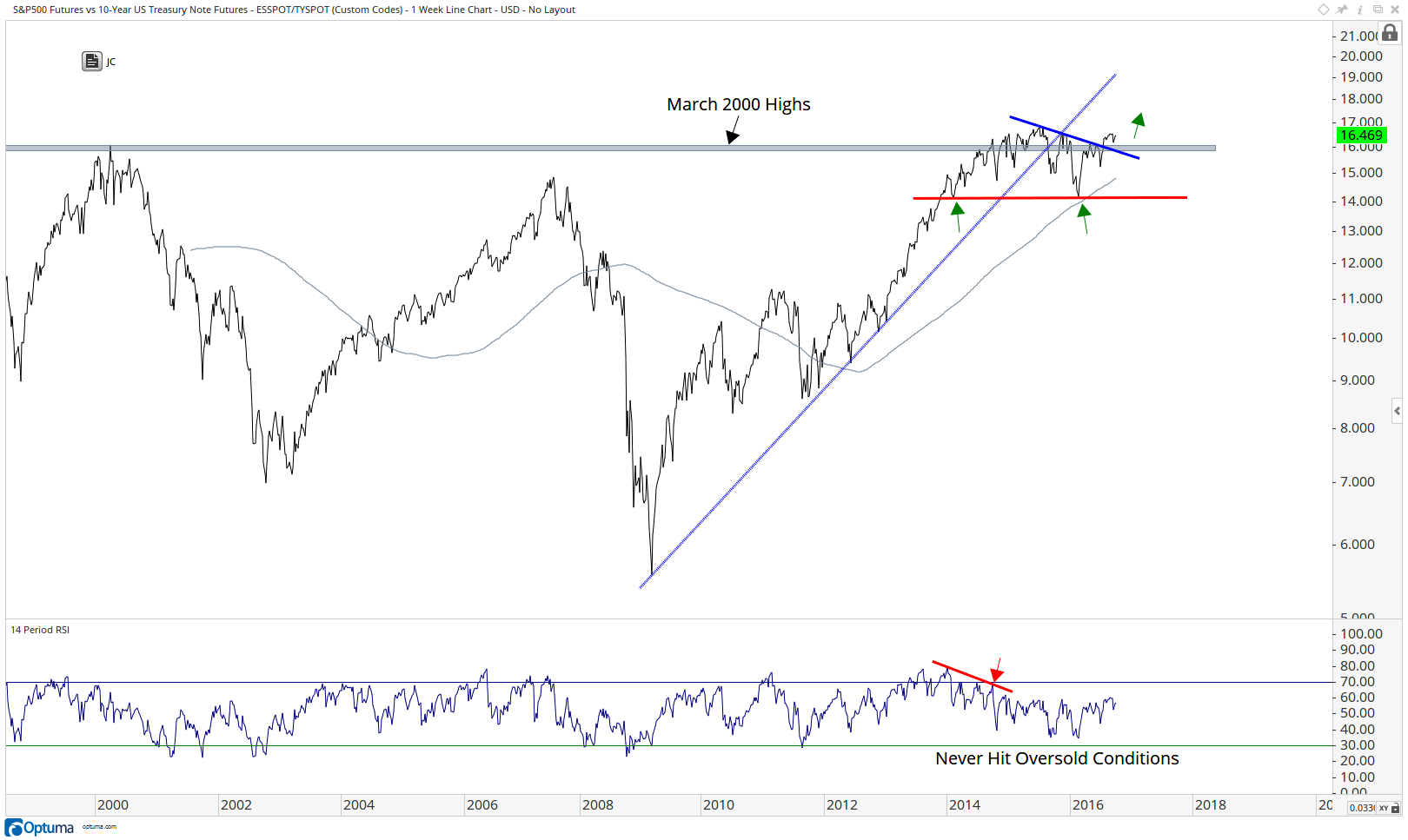 There is a lot going on here with Bonds and US Interest Rates. I think the next move could impact a lot of assets around the world.

For weekly updates on all of these charts, with annotations and comments, Register Here to start your 30-day risk free trial.