When you talk about stocks that we’ve wanted to stay away from for a long time, it’s hard not to think about shares of McDonalds. Since our big picture target was hit in late 2011, this has been a name we’ve wanted to stay away from, particularly from a structural perspective. Shorter-term it’s been pretty choppy as well struggling to get above the overhead supply that we’ve see over the past 4 years. Although this might be frustrating for those who have been involved, I think this consolidation is actually healthy long-term and all signs are pointing to an eventual breakout. But I don’t think it’s happening tomorrow. I believe we can still be patient.

Here is a weekly bar chart of $MCD showing prices hitting our 261.8% Fibonacci extension target just above $100 that we get based of the size of the consolidation during the 2008-2009 market correction. I do not believe in triple tops so I think this ultimately gets through and we see another leg higher: 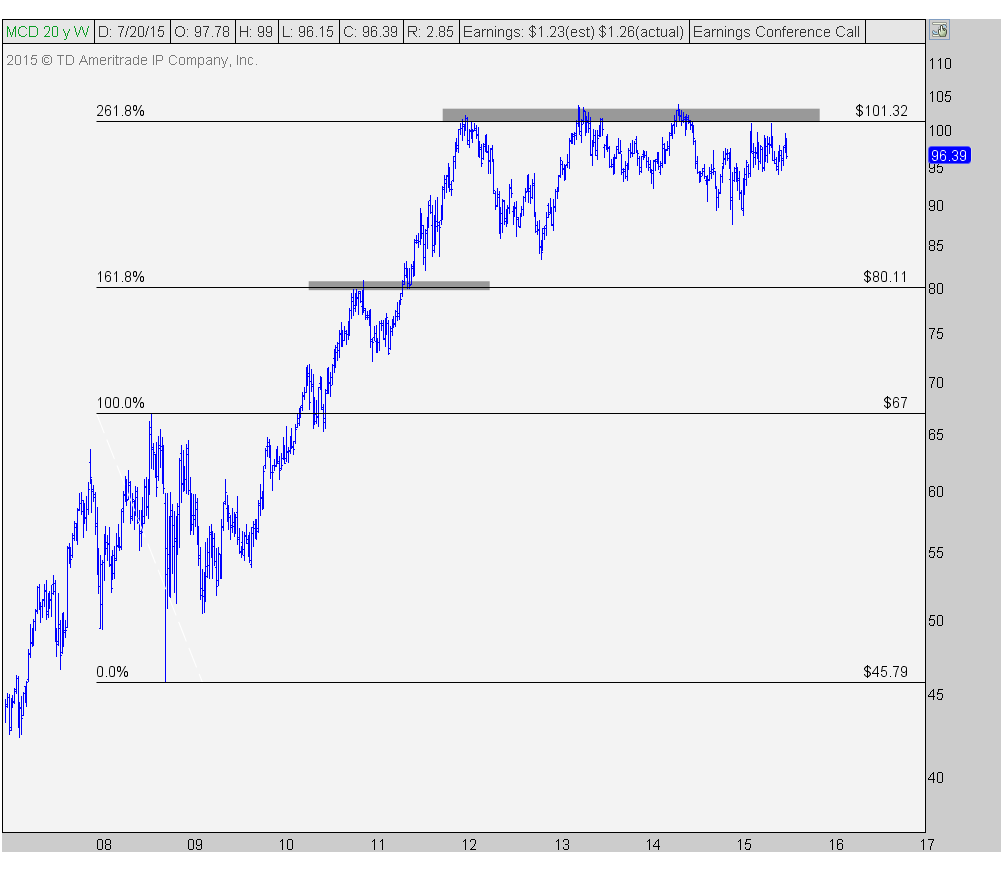 This next chart shows the uptrend line from the 2011 lows, just before it’s final leg higher, which broke last year. This is a problem that has kept us away short-term as well. I think that as long as prices remain below this broken uptrend, it’s still a no touch: 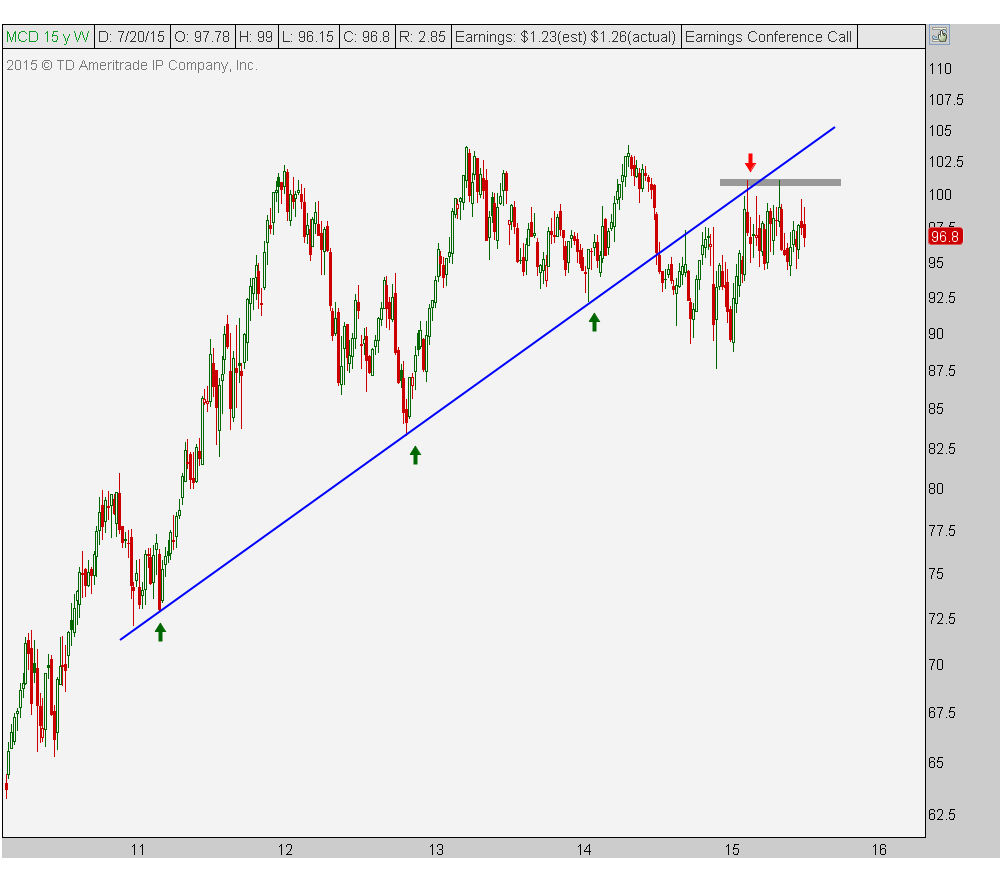 Finally here is the daily timeframe where I included a 200 day simple moving average. Back in February when prices shot up I was very vocal about it being a fade and staying away because the smoothing mechanism was still downward sloping. After a lot more choppy action since then, the 200 day is now starting to slope up. I think this is great but based on the weight of the evidence, we still want to stay away for now. This probably has a few more months left before we breakout, at least. 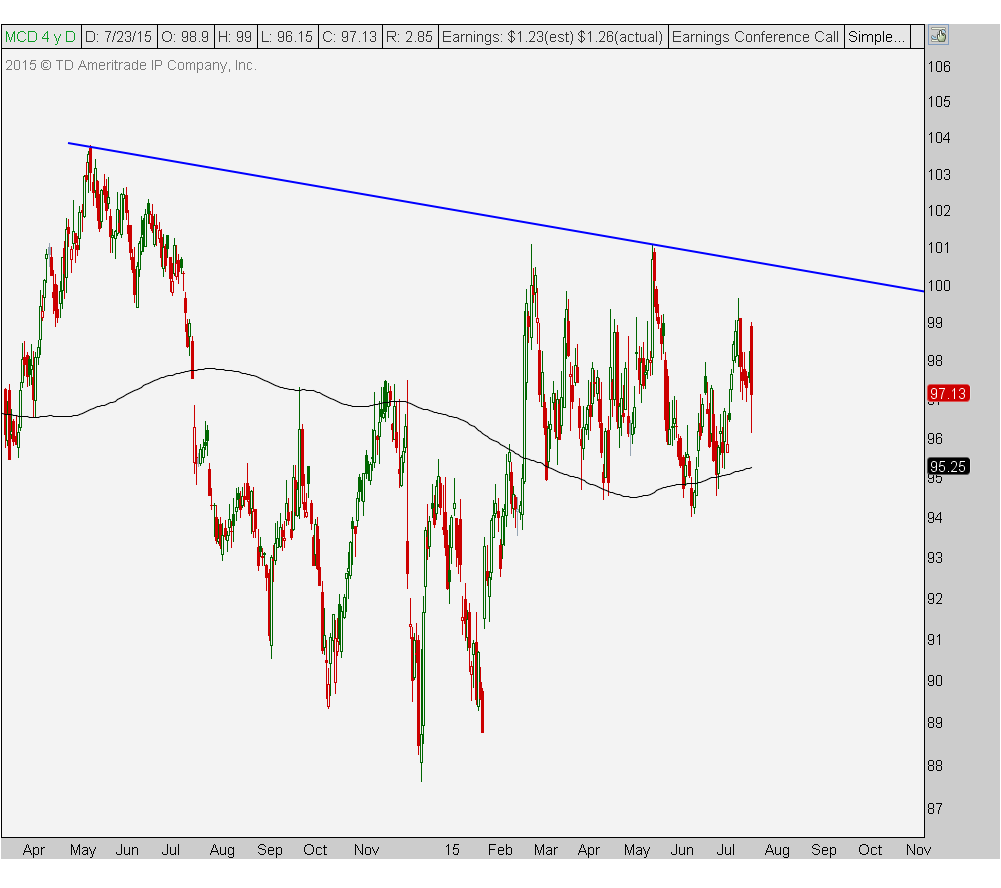 This is one we want to keep on our radar because big picture it’s setting up beautifully. Short-term however, we want to remain patient. Here is a short video that goes into more detail:

Click Here to receive weekly updates on each of these charts including the rest of the Dow 30 components on multiple timeframes including MSFT, AAPL, CVX, IBM, WMT etc