We talk a lot about the S&P500 and Dow Jones Industrial Average. Lately it’s been the Nasdaq100 leading the charge and actually the only index that hit new highs this month. Each of these are popular due to their large-cap components. In other words, these indexes consist of some of the biggest companies in America and most are household names like Apple or Microsoft, Exxon Mobil and McDonalds. These indexes are either cap-weighted, where the largest companies represent the largest percentage of the index or price-weighted, as in the Dow Industrials, where the highest priced stocks represent the largest holdings in the index. Today I want to focus on a broader equally-weighted index to get a better idea of what the market as a whole looks like.

We are looking at the original equally-weighted Value Line Index, also known as the Geometric Value Line Index, which consists of around 1700 names and assumes an equal dollar amount invested in each stock covered by Value Line. This gives us a better indication of the performance of the overall stock market as opposed to large-cap stocks or particular segments of the market. The first chart shows the weekly timeframe running up towards the previous highs in 1998 and 2007. The problem I see is the breakout above those levels this Spring that failed to hold. From failed moves tend to come fast moves in the opposite direction. So far we’ve seen just that: 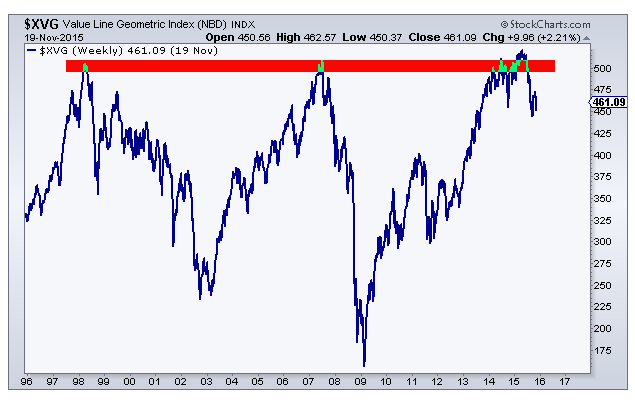 Notice how vicious the sell-off was after the breakout in May failed to hold. Not good. That leaves a lot of bag holders up there left with losing positions. This is new overhead supply.

Looking a bit closer, here is the performance since the 2009 bottom in the market. Notice how during that failed breakout in the Spring, momentum (defined by a 14-period RSI) put in a bearish divergence. Lower highs and oversold conditions in momentum while prices failed to hold on to new highs is a very bearish combination: 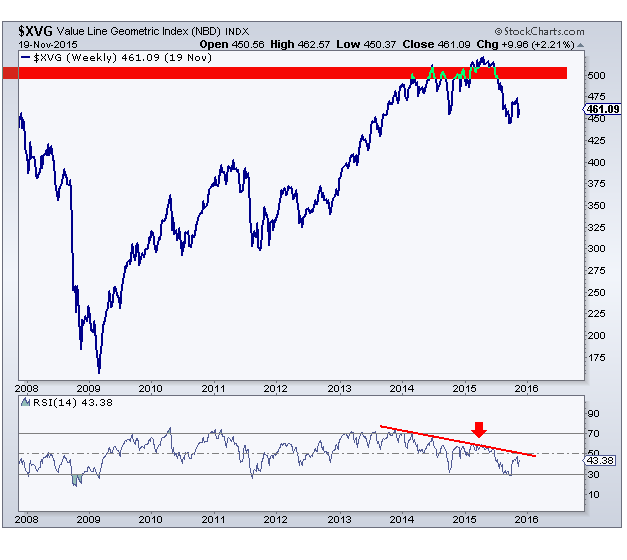 One of the things that keeps me on the sidelines, or bearish, when it comes to the U.S. Averages is the lack of participation. Only a couple of sectors were able to make new highs this month and very few stocks. With new highs in the market, we want to see an expansion in participation, not a reduction. But a reduction is what we got here and we’re forced to trade the market that we have, not the market that we want.

Click Here to learn more about other Members-only benefits.