This is a topic that we’ve exhausted here on this site. The infamous natural gas trade….

Coming into March, I figured that the trade of the year was going to somehow be related to Natural Gas. Whether it was trading futures, or the ETF, or even a pairs trade against Crude Oil, Nat Gas was going to be on the long side of our portfolios at one point or another. My friend Josh wrote a post about it. I was on Canadian Television with the belief that the low was near by. I put up post after post about the Crude Oil vs Natural Gas ratio hitting ridiculous levels that were unsustainable. But the best part was that when this trend reversed, we figured the action would be vicious. A face-ripper, if you will.

Peter Brandt, easily one of my favorite technicians, has a great post up about this potential bottom in NatGas prices.

“At long last, a bottom may be in sight. The Natural Gas market has been in a cyclic bear trend since late 2005, as seen on the monthly chart below. I believe strongly that the low at 1.902 will not be seen again in my trading lifetime. The continuation daily chart displays a classic H&S bottom. If this interpretation is correct the June low may serve as the right shoulder low.” 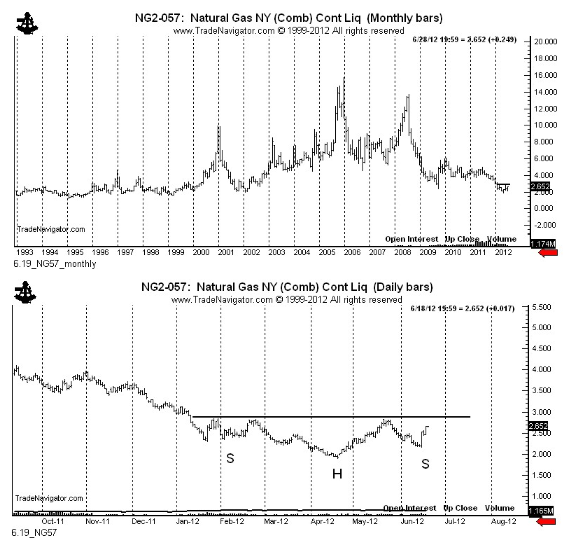 I think Peter is absolutely right with his analysis. After the Crude Oil / Natural Gas ratio peaked 2 months ago at a high above 54:1, we’re now approaching 30:1, down a cool 40% very quickly. The average since 1990 has been 10:1, so I don’t think it’s crazy to think that we’re still in the midst of a major crash.

On an absolute basis, Nat Gas has plenty of room to run. Remember, this was a commodity that was basically left for dead. And Peter does a nice job in his post explaining the thought process. I’m sure you’re annoyed with my thoughts and comments on this by now, so go see was Brandt has to say, At Last, A Bottom In Natural Gas.

At Last, A Bottom In Natural Gas (PeterLBrandt)