Welcome back to our “latest Under The Hood” column for the week ending March 5, 2021. As a reminder, this column will be published bi-weekly moving forward, and rotated on-and-off with our new Minor Leaguers column.

In this column, we analyze the most popular stocks during the week and find opportunities to either join in and ride these momentum names higher, or fade the crowd and bet against them.

We use a variety of sources to generate the list of most popular names. There are so many new data sources available that all we need to do is organize and curate them in a way that shows us exactly what we want: A list of stocks that are seeing an unusual increase in investor interest.

Whether we’re measuring increasing interest based on large institutional purchases, unusual options activity, or simply our proprietary lists of trending tickers… there is a lot of overlap.

The bottom line is there are a million ways to skin this cat. Relying on our entire arsenal of data makes us confident that we’re producing the best list each week and gives us more optionality in terms of finding the most favorable trade setups for our clients.

The recent strength from Equity Markets continues to make our job a delight and offer us plenty of favorable long setups to choose from.

“Under The Hood” is a value-add for investors of all kinds as we express our bullish thesis through a variety of different types of stocks.

Speaking of which… Here’s this week’s list of hot stocks: 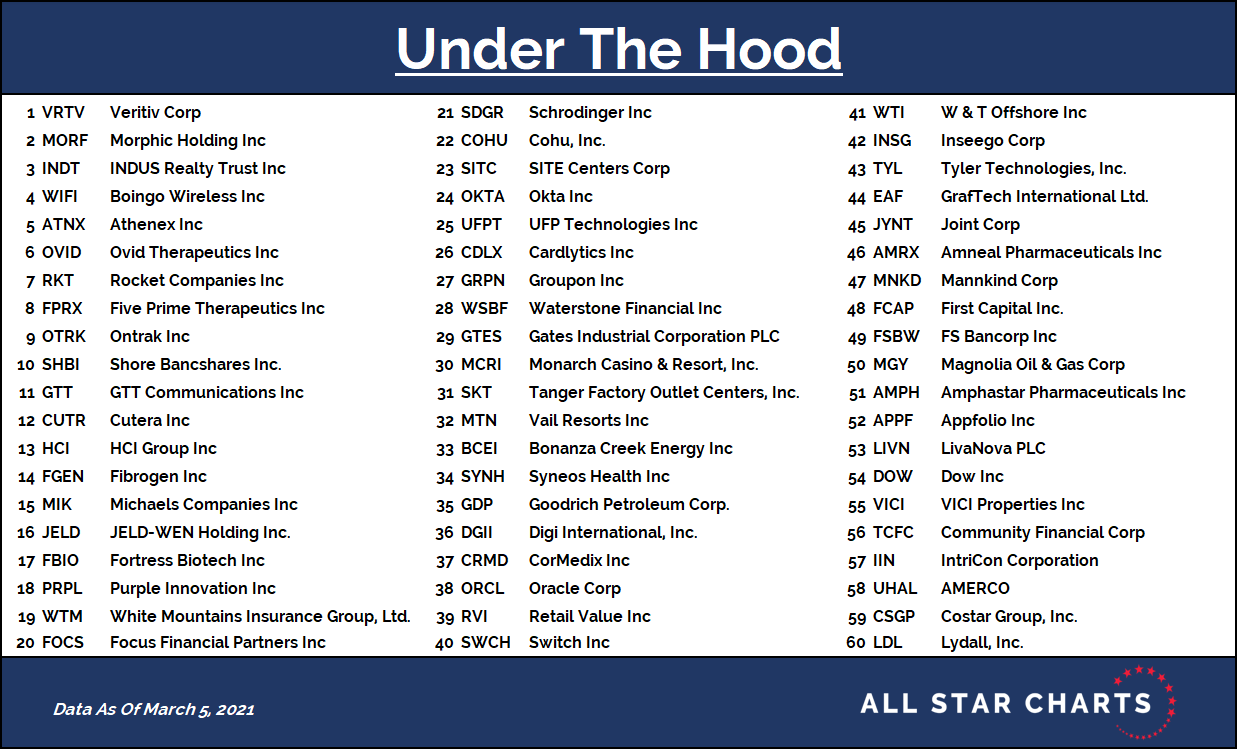 Let’s kick things off with some of the real big movers on the week.

We also offer a separate subscription to purchase the Under The Hood and Minor League columns ala carte. If you’re interested, click here to learn more.

Here is one of the Reddit community’s most recent victims, Rocket Companies $RKT. The company owns a number of financial subsidiaries, including America’s largest mortgage provider, Quicken Loans.

Not our favorite setup, and not the kind of name we prefer to be involved with considering the current headline risk but if you’re looking for the next big short squeeze this one could certainly have more juice in it with nearly 40% of the float currently short.

We want to define our risk at those key prior highs around 24 as we’re already seeing this level serve as potential support. If we’re above it, the bias is higher and we’re targeting last week’s all-time high of 43 over the next 1-3 months.

This next name just popped +70% last week on the heels of an earnings beat. This is the small-cap paper and products company, Veritiv Corp $VRTV, which according to IBD.com even specializes in delivering janitorial supplies to businesses… If that doesn’t make you want to buy this name I don’t know what will!

This name is very popular with institutions as they own over 80% of the outstanding shares, including a number of large hedge funds. On the other hand, it’s not at all popular on the sell-side, as only a single analyst covers the stock.

Price just broke out of bases to new 2.5-year highs on both absolute and relative terms.

If price can hold onto and digest its current gains constructively, we’ll be buyers on strength if and when it reclaims 40.50 with a 3-6 month target of 62.

HCI Group $HCI,is a small-cap property & casualty insurance company which gapped higher by about 20% last week after announcing that another firm will be investing $100M in its TypTap subsidiary.

Not only do we have evidence of a structural reversal relative to the broader market but price just completed its breakout of a 7-year base on absolute terms.

We think HCI becomes a future leader and want to own it on strength (and ideally after some consolidation) if we’re above 72 with a 3-6 month target of 101.

Price screamed higher by nearly +7% on the heels of an upgrade Friday, making new all-time highs and achieving our objective in the process.

After two decades, Oracle is just now hitting its first extension from the stocks’ dot-com bubble drawdown. After such little progress for so long, we think this former tech sector leader has plenty left in the tank.

Keep in mind the company is scheduled to report earnings next week on March 10th. Once that is out of the way, we want to own ORCL as long as we’re above 71.50 with targets of 91 and 111 over the next 2-4 and 6-12 months, respectively.

Next up we have the hotel operator, Vail Resorts $MTN. We’ve been noticing a theme of Leisure & Entertainment stocks popping up left and right on our scans lately… think restaurants, hotels, brick & mortar retailers, and the like.

The media likes to refer to this as the “reopening trade.” We think it’s simply a characteristic of healthy risk-appetite and rotation.

There’s only one way to describe Vail’s chart, though… and that would be: “at new all-time highs.”

Price is also breaking above a downward sloping trendline vs the broader market and just closed out the week at its highest level since 2019.

Next up is another name that’s completely ignored by analysts yet loved by institutions. Be careful though, because due to institutions owning roughly 90% of White Mountain Insurance $WTM it’s thinly traded with a float of just 3M shares.

The single analyst that covers the stock has a hold rating on it. But don’t even pay attention to that as these analysts have missed the entire move in this stock… from under $25/share back after the crash of 1987, to a price well above $1,000 today, they haven’t been involved the entire way. Why would anyone ever trust these guys?

We choose to trust price. And as long as we’re above the old all-time highs of 1170 it’s indicating that the bias is higher and we want to be long with a target of 1500 over the next 3-6 months.

Sticking with Financials for now, next up is the Milwaukee-based community bank, Waterstone Financial $WSBF.

Price just closed the week at fresh all-time highs after taking out key former resistance at its former highs just above 20.

As the stock resolves higher from a 4.5-year base, we want to see that strength pour over to it on a relative basis. We think that’s likely to be the case as it’s already built out a nice bottoming formation and is currently at its highest level vs the broader market in almost a year.

This is FS Bancorp $FSBW which is a micro-cap bank holding company based in Washington.

Similar to WSBF, we’re looking at another bullish multi-year base breakout to fresh all-time highs. Price also just broke to new 52-week highs on a relative basis after exploding higher through key former support at the 2018 and 2019 lows.

Next up is the $50B chemicals and materials conglomerate, Dow Inc $DOW.

After two years of absolutely no progress, price is coiling just above its all-time highs in a tight continuation pattern. As long as we get some follow-through and confirmation of this breakout, the bias is higher, and our risk is very clearly defined.

Let’s take a look at VICI Properties $VICI now. This REIT owns one of the largest portfolios of gaming, hospitality, and entertainment destination properties. This is another name tied to the Entertainment & Leisure space… and just like so many others (see MTN), it just broke out to fresh all-time highs.

VICI has been steadily grinding higher, closing on Friday at a fresh all-time high, and after moving a considerable 196% off the March lows, we are expecting another leg higher.

As long as price is above 28 this breakout is valid and the bias is higher in VICI. We want to be owners against the former all-time highs with a target of 40.50 over the next 2-4 months.

Next up is a large-cap equipment and storage rental company with operations in the US and Canada. This is AMERCO $UHAL, better known by it’s brand name U-Haul.

UHAL has made new all-time highs a seemingly daily routine since breaking out of its 5-year base above the 400 level last year. Price has already rallied an additional 50% and is closing in on 600 now. Although, it’s just getting started in terms of relative strength as it recently broke above trendline resistance to its highest level since 2017 vs the Russell 3000.

With the stock trading in unchartered territory, we want to use Fibonacci extensions to manage our risk in this one.

We only want to own UHAL if we’re above 616 with a target of 983 over the next 6-12 months. This one might need some time to consolidate after such a nice run, so be patient with it.

Next is UFP Technologies $UFPT, a small-cap manufacturer of highly specialized foams, films, and plastics primarily for the medical market. Don’t be confused by the name. This is not a tech stock… it’s in the Materials sector.

UFPT just broke out of a year-long basing pattern to its highest level in history,

Last on our list is Bonanza Creek Energy $BCEI an exploration and production company that focuses on the extraction of oil and natural gas in the United States.

After going nowhere since coming public in 2017, that finally looks to be changing as the stock just closed the week at fresh all-time highs.

As long as we’re above the former highs this multi-year base breakout is valid and we should anticipate higher prices.

On a relative basis, BCEI has reclaimed a significant level vs the broader market and is now trading at its highest level since 2018.

That’s what’s going on under the hood in the most popular stocks right now!