It isn’t a secret to anyone that the precious-metal space has been a train wreck for close to two-and-a-half years. The price of gold went down almost 40%, and silver lost over 60%. And this is just since 2011. But the gold miners, the actual companies and stocks in that sector, have gotten hammered even more so — down 70% from those 2011 highs. It’s no wonder this is one of the most hated sectors out there.

I think the actual commodities, gold and silver, are still a mess and will probably continue to chop around as they try and recover from this disaster. Time is usually the best remedy for selloffs this quick and damaging. But there is one trade here that I think is worth paying attention to, and that’s the pair trade between the actual commodity and the companies: the SPDR Gold Trust $GLD vs the Market Vectors Gold Miners Trust ETF $GDX. This has consisted of a long position in the gold ETF along with an equal nominal amount of a gold miners ETF short position. This particular trade went up 160% since 2011. I believe that rally is now over and it is time to flip the position.

Here is a weekly candlestick chart of GDX vs GLD. The trade now is essentially long the gold miners and short gold the commodity. The break to new lows in December was only temporary. I believe we have ourselves a false breakdown here in this pair. And as the old saying goes, “from false moves, come fast moves in the opposite direction” — in this case, higher. 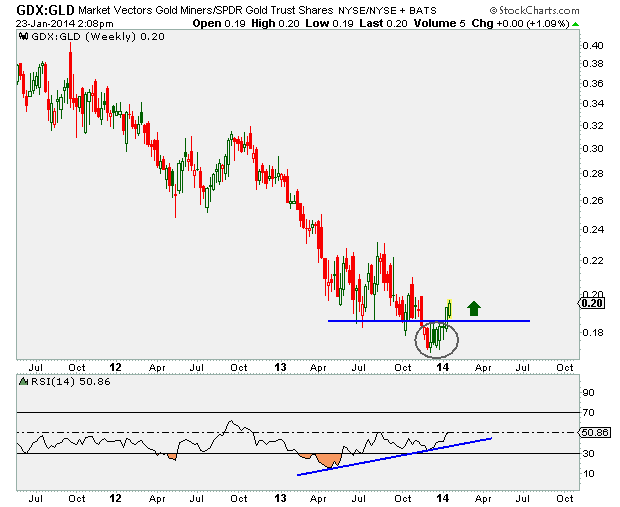 To me, the confirmation of this false breakdown came when the ratio was able to get back above 0.187. Meanwhile, as prices of this ratio were making new lows in December, momentum was putting in a higher low. This is what we call a bullish divergence. I define momentum in this particular case by using a 14-period relative-strength Index, as developed by J. Welles Wilder.

As long as this ratio remains above 0.187, I think all systems are a go, and miners should continue to outperform the metal. There’s no telling how high it can go. A good initial target would probably be 0.30, which was the fall of 2012 highs. This represents a move of over 50% from current levels, with a risk of just a couple of percentage points. A 25:1 risk/reward ratio is a home run in my book. I’ll take that all day.

But realistically, we could see much higher levels than just 0.30. Important resistance from 2009-2011 was in the upper 0.40s where this big trend first started. I think it’s possible to get back up there. So, if this truly was a bullish divergence and false breakdown, this could be the start of a beautiful rally, similar to what occurred in 2011 (just in the opposite direction).

To me, this is a great way to participate in the precious-metal space while maintaining a more neutral stance on the direction of the metal itself. All we’re betting on here is the outperformance of the companies over the metal. It sounds simple, and it is. I prefer to keep thing that way.