I know I know, stop it with the clichés.

But it’s true. This isn’t a stock market, it’s a market of stocks. The headlines won’t tell you that though. All you’re going to read is, “Dow hits another all-time high”, or “S&P500 closes at historic levels”. What you won’t read is, “Less and Less Stocks Participating in Weakening Market Rally”. A headline like that doesn’t sell. It isn’t sexy. Why let the facts get in the way of a good story?

The internals of the market are something that as participants, we must take very seriously. Because again, this is a market of stocks. I remember back towards the end of 2007, it was almost a joke. If you weren’t trading Apple, Amazon, Google, or RIMM, there was no reason to come into work. The 4 horsemen, as they were called, and some of the Ag names were the only ones still going up while the rest of the market was rolling over. It was comical. And we all know what happened after that.

We then saw the opposite towards the end of 2008 – early 2009. The bottom in “Stocks” for the market was at the October low. More stocks hit new 52-week lows that day than any other. When the market rolled over again to new lows in November, even less stocks hit new lows. And by time the March lows came in for the “market”, most stocks had already bottomed out and were ripping higher. The ones who bottomed first, led the way higher after that – Tech is a good example.

So here were are today with sexy headlines as far as the eye can see. New Market highs they tell me. But the market of stocks says otherwise. New Highs minus New Lows peaked in January. “Stocks”, if you will, have been rolling over for a few months while the “market” is still making new highs. 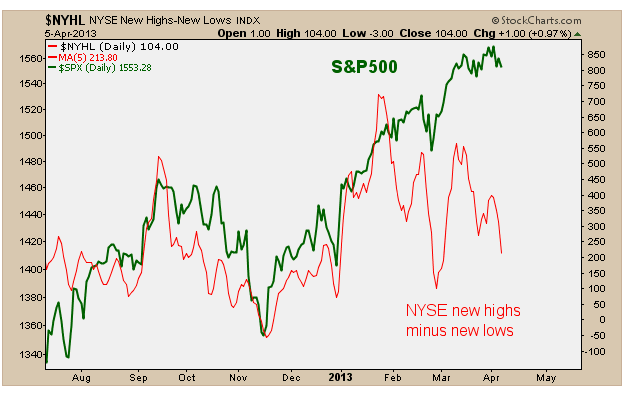 And here is the chart of S&Ps compared to the 52-week high list. This peaked months ago as well: 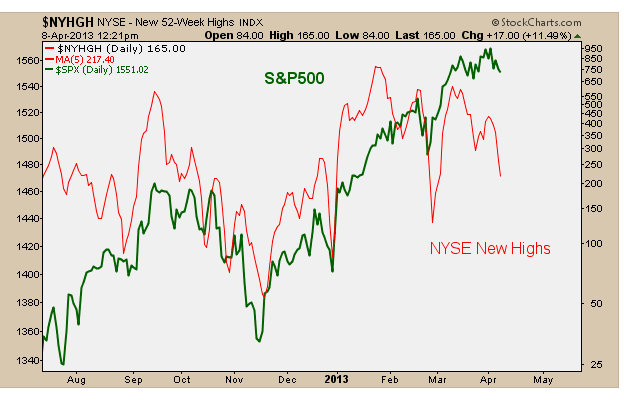 And forget the chart for a minute. You can feel it. If you watch/trade this market every day, you see your stocks aren’t making new highs daily like the market headlines say they are. The healthcare names and some of the staples sure. But materials? Industrials? Tech? Not so much.

So be aware of the facts. Sometimes they help. Sometimes…