I don’t think that watching just the S&P500 and/or Dow Jones Industrial Average is enough to really understand how the “market” is behaving. What are some of the key components doing compared to one another? How are certain risk assets behaving relative to some more conservative investment vehicles? These are questions that we ask ourselves every day.

On Friday, we discussed several intermarket relationships that tell an important story about what’s going on behind the scenes. We mentioned in this post that the Aussie Dollar did NOT make a new low relative to the Japanese Yen as the S&P500 rolled over in early June. We also noted that Consumer Discretionaries put in a higher low relative to Consumer Staples while the S&Ps were making fresh lows. And in the Bond market, although Junk bonds made new lows relative to US Treasuries, RSI was putting in a higher low showing a bullish divergence in the bond market. We took all of this intermarket behavior as a positive.

Today we’re looking at two more pairs telling us that, at least for now, we should be looking to put risk on, not taking it off. The first one is the Russell2000 vs the Dow Jones Industrial Average. The Russell is a popular measure of small-cap stocks while the Dow Industrials represent 30 humongous US companies: 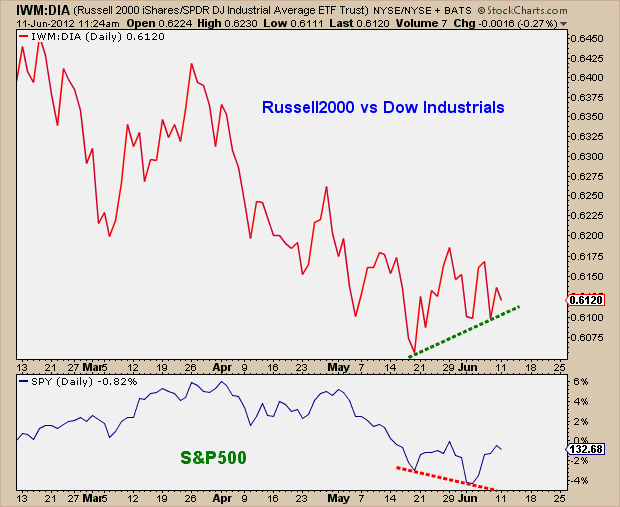 Notice how the S&P500 made new lows, but the Small-cap/Large-cap ratio did not. This is one positive development that we just can’t ignore. If the stock market was as vulnerable as one might believe based on those new lows, then small caps should not be outperforming large caps, they should be confirming those new lows with new lows of their own.

Meanwhile, Emerging markets are also showing relative strength compared to domestic names. When we see the more speculative emerging stocks outperforming the theoretically more conservative domestic names, that tells us that market participants are more willing to put risk on. 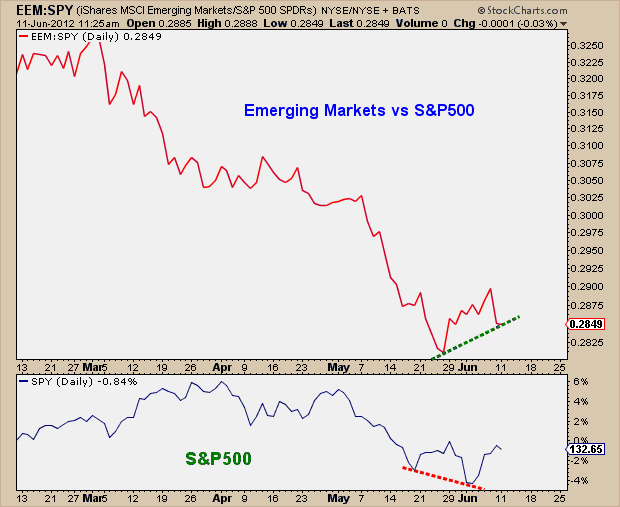 Again, like we mentioned last week, if these pairs roll over to new lows, they would be suggesting that things are bad out there and we should be getting defensive. It’s not just about, “Where did the Dow close today?”. We want to see what’s happening underneath the hood. And for now, things look OK.