My friend James Bartelloni sent this note over yesterday. For those who don’t know, Bart is a U.S. Navy veteran and spent 12 years in the cockpit as a TOPGUN graduate in the F-14. Having graduated from the US Naval Academy with a BS in Mathematics, he later went on earn his Chartered Market Technician Designation. Bartelloni is now a Portfolio Manager for V50 Capital Management.

I think the long-term mathematics behind the Dow Industrials are fascinating. Here’s Bart’s take:

JC, once again, has given me the opportunity to “guest post” on his site. Thanks …

As been stated before, I am a full blown chartist.  Don’t look at anything but charts and trust the “numbers” and “patterns” to help me manage risk.  One of the most “known” techniques within the market is that of using Fibonacci numbers to look for leading indications of support and resistance.  Trust me, there is a lot more than tracing out a simple retracement grid, but in order to keep things simple we will focus on the basics.  The key to using any technical technique is having the correct data.  If you start from the wrong point, you end up at the wrong point.

The first chart, courtesy of The Chart Store, shows the long term march of the DOW since its beginning.  Of note, are the key levels back from the 1800’s ….. I have data that is off by a couple days and a couple points but in the context of a 15,000 point move I will submit it’s negligible. (work with me ….)  It’s a LOG scale chart showing the AMAZING move in the Dow Jones Industrial Complex. 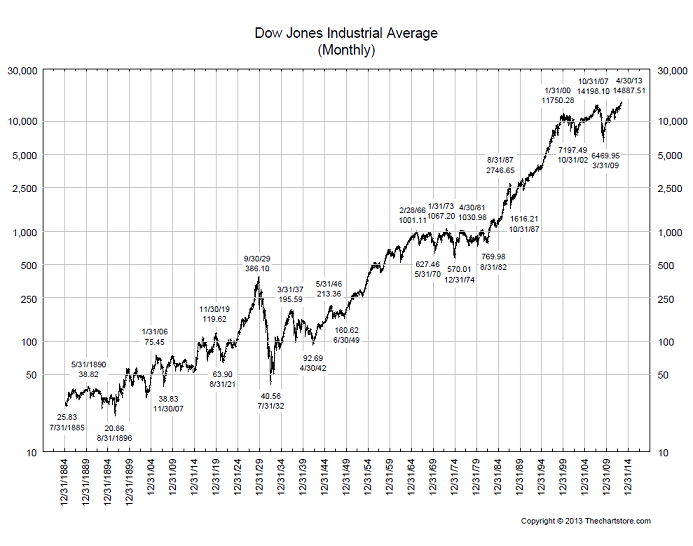 Our second chart has some key, yet basics points.  Again, the KEY is the starting NODE from which to make an analysis.  Note, using the all time low on the DOW from 1896 we can see that the basic .382 and .50 retracements “caught” the market from the 2000 and 2007 high.  (The 2009 low was on a closing basis – can send an exhibit showing the “exact low” if interested – let JC know) What does this mean?  It means that our low from 28.48 in 1896 is key to the overall rhythm of the market. (click chart to embiggen) 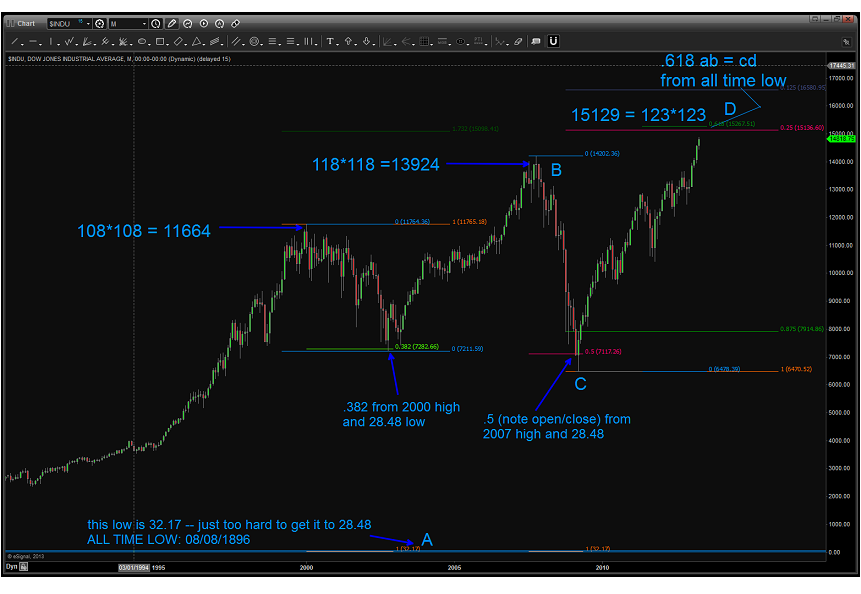 The other point I would like to make is how “natural squares” appear near major tops. See 2000,2007,2013 … the reason for this is probably too complicated to get into in this type of forum but just go do some chart study and note the natural squares in both TIME and PRICE and you’ll be surprised.

Lastly, based on 1/8 divisions of the musical scale I have used the monthly signal reversal candle to project up into space for another potential target.

My friend Bart is a self proclaimed “Intermarket Musician”. Whether you agree with his conclusions or not, you have to admit that the math behind the Dow is really interesting.

Check out some older guest posts that Bart has sent over:

Parabolic Advances and their Devastating Corrective Moves (May 6, 2012)