So I guess that’s what we’re calling it right?

Last Monday, Facebook announced that it would be acquiring Instagram for the humble sum of One Billion Dollars. That day Apple stock closed at a record high $636.23 and since then it’s been down hill. Five days in a row of losses resulting in about a 9% correction in price.

Funny that one of the apps that I use most on my iPhone was bought out by an app that I have never used. Facebook just isn’t my thing. I’m more of a Stocktwits kind of guy, so I always thought Instagram was cool. Anyway, America’s favorite stock is the topic of conversation, as usual:

Here is the daily chart showing the most recent uptrend that saw a 70% price appreciation in just 4 months. You think $AAPL deserves a little breather? 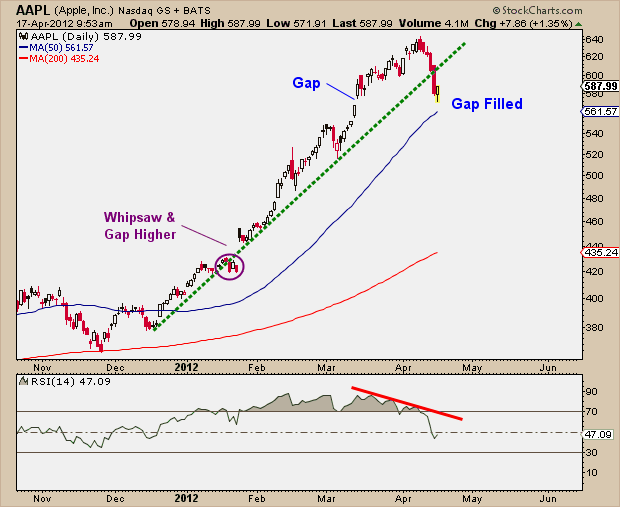 I drew what I think is the most important trendline using a green dotted line. The uptrend was broken over the last week, so it’s time for us to take a closer look. Now just because there is a change in trend, doesn’t mean that the trend has reversed. In fact, there isn’t any evidence yet that this will be more than a sideways correction.

The Relative Strength Index (RSI) has been showing some bearish divergences, very similar to what we’ve been seeing in the S&P500. With new highs in the S&P500 and $AAPL, RSI has been making lower highs. This is just a warning that momentum is slowing and some overbought levels need to be worked off.

I think this is what we’re seeing right now. So far Tuesday, $AAPL is bouncing off Monday’s lows, but it’s probably going to take some time before last week’s all-time highs are taking out. The most constructive action would be some kind of sideways consolidation. This would allow the moving averages to catch up, and price to catch its breadth a bit. We could even see further selling in $AAPL down to the $540s and still, not all would be lost. Anything more and we’d have to reevaluate this position.

I’m not in Apple stock right now and don’t really want to be. When in doubt, stay out. And that is OK by me. After some consolidation, I might be interested. I think the only thing that will make this name more attractive to me is time.