The S&P500 was making new highs throughout the month of March, but momentum was not. This is the latest warning that the stock market is getting tired. Last week we brought up the fact that less individual names were making new highs as the major averages continued higher. Today we’ll take a quick look at momentum.

The chart below shows the S&P500 Exchange Traded Fund ($SPY) with the Relative Strength Index (RSI) down below. On March 26th, $SPY closed at new multi-year highs while RSI put in a lower high. Then on April 2nd, $SPY made fresh intra-day and closing highs. RSI meanwhile put in even lower highs. We’ve seen three higher highs in price, with lower lows in momentum. Not good. 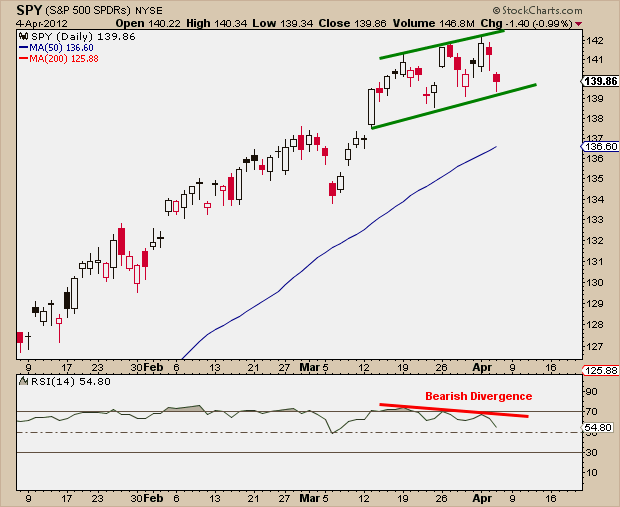 Does this mean that this is the end of the world and the market is going to crash? No. Not at all. But with less and less stocks making new highs, and momentum rolling over, it just means we need to pick our spots better. A correction in the S&P500 here would be normal and healthy. So a little bit more attention to risk management here is probably a good idea.

But there are individual names that are still going higher. And there are also stocks making new year-to-date lows. But as far as the major averages go, only price pays. And new highs were put in earlier this week. But the red flags are there.

About That Divergence in New Highs (Allstarcharts March 29, 2012)