When stocks do well these days, you can count on the bears to come out all excited about a low Volatility Index. “A $VIX of 15 has been a stock market sell signal for years”, is basically what you’ll hear. But what they won’t tell you is for how many years? What the bears really mean, is that since late 2007 (which marked the end of the cyclical bull market) a low volatility environment has been an opportunity to take risk off the table. Understood. But what about before that? I mean, there was a stock market before 2007 right?

Yup, and as it turns out, prior to late ’07, a volatility index in the mid to high teens was actually a buying opportunity for stocks, not a sell signal. A low volatility index had a 10 handle back in those days. We’re talking, of course, about the period between 2003-2007, which represents the last cyclical bull market we saw prior to the ’08 crash.

So what about before that?

Well from the late 90s and into 2002, today’s bears would have some nice talking points. Just like the last few years, a Volatility Index in the mid-teens was a chance to take risk off.

But before that, low volatility, once again, meant a 10 handle in the $VIX. 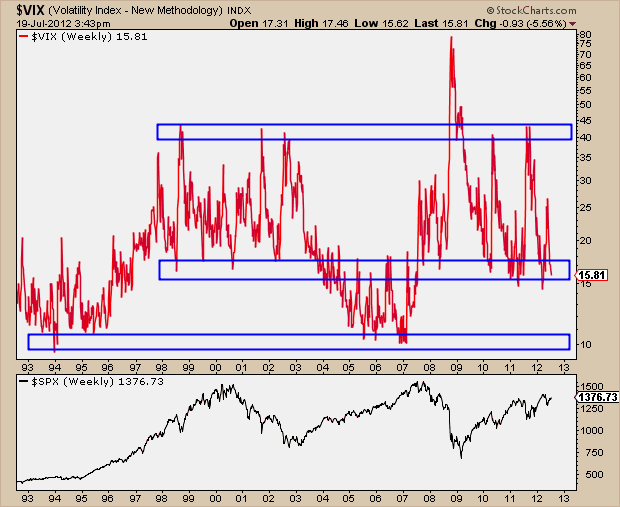 So I’m not saying that the $VIX won’t go higher from here. All I am asking is why can’t it go lower?

It Would Be Too Quick Now To Have Another Spike In Volatility (June 26, 2012)