It’s important to understand how our favorite averages are being computed. Some are Cap-weighted like the S&P500 and others are price weighted like the Dow Jones Industrial Average. I always find it funny that $IBM is over 20 times more important for the Dow than Alcoa ($AA) only because one is $190/share and the other is just $9. But the averages doing the best during this bull market are neither one of these. The winners here are the Equal-weighted averages that give each stock in the index the same value.

Last month we pointed to the Nasdaq100 Equal Weight Index making new highs, while its Cap-weighted counterpart ($QQQ) was being held back by the bear market in $AAPL. Pull up the charts, nothing’s changed since that post. Just higher highs from the Equal Weight Index and more underperformance out of Apple and the Triple QQQs.

Today I wanted to take this notion a little bit further and look at the Equal Weight S&P500 ($RSP). Carl Swenlin has a killer post up this weekend breaking down the differences:

I have long been a cheerleader for equal weighted indexes versus cap-weighted ones, and now seems like a good time to demonstrate why. In a cap-weighted index stocks influence the price of the index based upon their market capitalization (price time number of shares). For example the top 50 stocks in the S&P 500 Index represent about 70% of the index value, with the remaining 450 stocks providing only 30%. With an equal-weighted index all stocks carry the same weight — all the horses are pulling the wagon.

Below is a chart of the Guggenheim (formerly Rydex) S&P500 Equal Weight ETF. Look at the Equal Weight taking out and pushing beyond its 2007 highs while the $SPX continues to trade well below it. According to Swenlin, the S&P500 is up 114% from its 2009 lows. Meanwhile, the Equal Weighted version is up 175% during the same period. The 3rd chart below shows the relative performance between the two ($RSP:$SPX) since 1999: 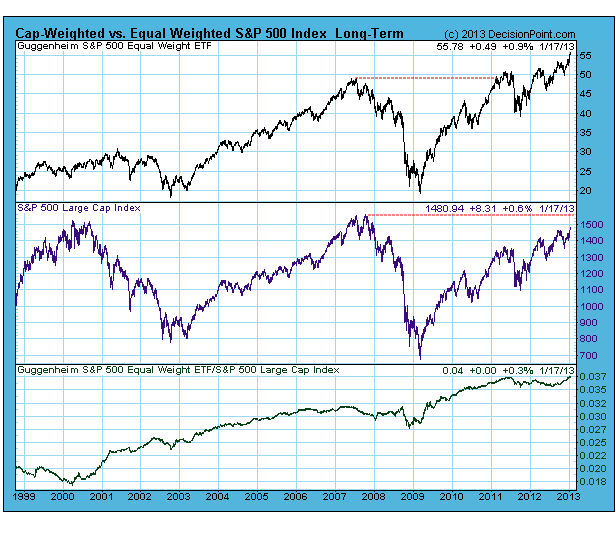 Swenlin makes a good point in that the Equal Weighted Averages may not always be the best choice as they tend to move faster to the downside than their Cap-weighted counterparts. But in Bull markets, they clearly deserve some close consideration. I think this chart above shows that well.