One of my most important charts has to be the relative performance chart for Consumer Staples. I don’t care if you’re a technician or not, this is a big one. The psychology behind the price action is very simple: Money has to be put to work, one way or another. Whether that money goes into Tech, Financials, Discretionaries, or chooses to be more defensive into Staples is another thing. If the economy is slowing and things are “bad”, we’re still going to drink soda, smoke cigarettes, brush our teeth and wash our dishes right? That’s not going to change. So when institutions need to allocate money and prefer to be “defensive”, for whatever reason, the flow into staples picks up relative to other areas of the market (Coca-Cola, Philip Morris, Colgate-Palmolive, etc).

Here is a daily line chart of S&P Consumer Staples vs S&P500 to show the relative performance I’m talking about. I think it’s pretty clear that since the 2008 market crash, when institutions were dumping money into staples on a relative basis, price has been coiling to the point where it’s decision time very soon: 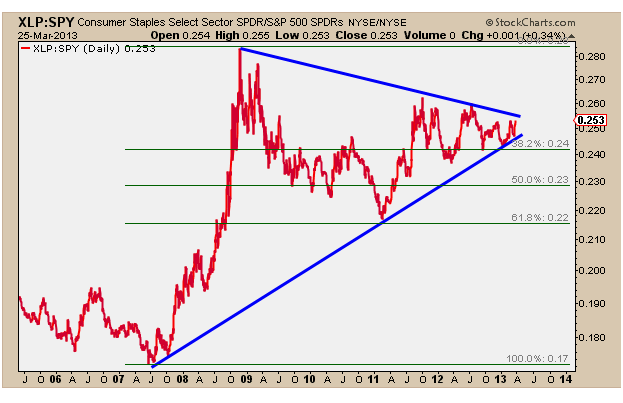 The XLP/SPY correction off the 2008 highs retraced approximately 61.8% of the entire crash move. This is pretty standard within an ongoing uptrend. Also, the combination of the downtrend line off the 08 highs and uptrend off the 07 lows has created this symmetrical triangle looking formation that needs to resolve soon.

A breakout from this pattern would be bearish for US Stock as a group, in my opinion. While a breakdown here, which I consider much less likely, would bode well for equities as an asset class.

I’d be watching this one closely if you have any exposure to the stock market whatsoever.