It’s important to not only have a broader perspective on the market, but to look underneath the surface to see what is actually taking place. Precious Metals haven’t exactly been my favorite asset class lately. It’s for good reason too. There have been so many better places to be. It’s not even close.

So today we ask the question: Is it time to be buying precious metals?

My Gold workbook has 100 charts in it. You can find the entire thing regularly updated here.

This note was originally intended for Premium Members of Allstarcharts, but was opened up several months later for academic purposes

Let’s start with Gold itself from a longer-term perspective. This was a downtrend from 2011 until early last year. That’s clear. After the initial thrust higher in the first 5 months, it’s been a steady decline and/or consolidation of those early gains. This is normal. Prices are near a flat 200 week moving average so the weight-of-the-evidence suggests this is still a sideways range, a lack of trend: 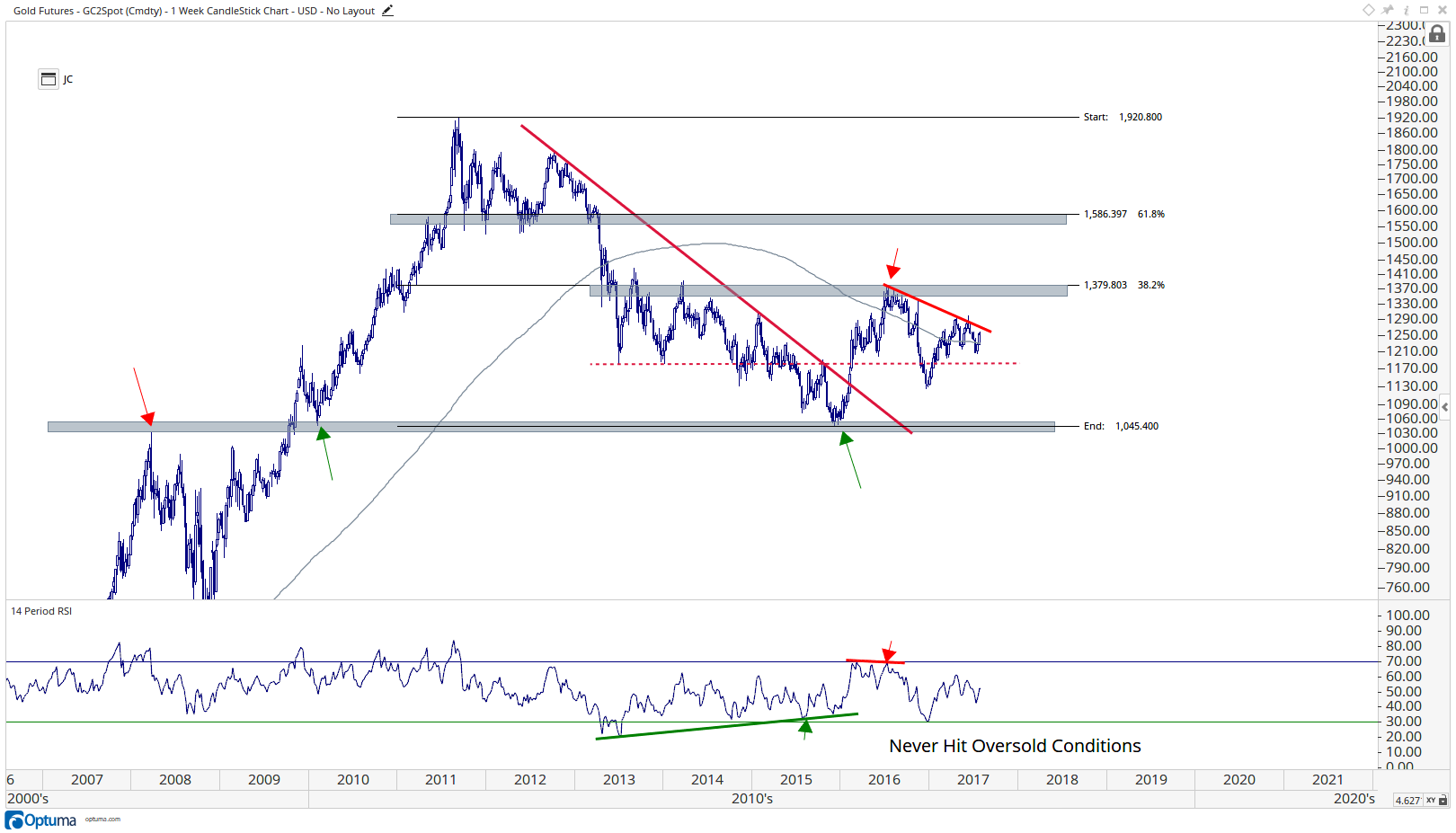 Here we are looking at a mess. There’s no better way to put it. Prices are below a ton of overhead supply near 1300. The 200 day moving average is downward sloping to flat at best. Momentum is still in a bearish range. We’re just breaking uptrend lines and are not breaking downtrend lines: 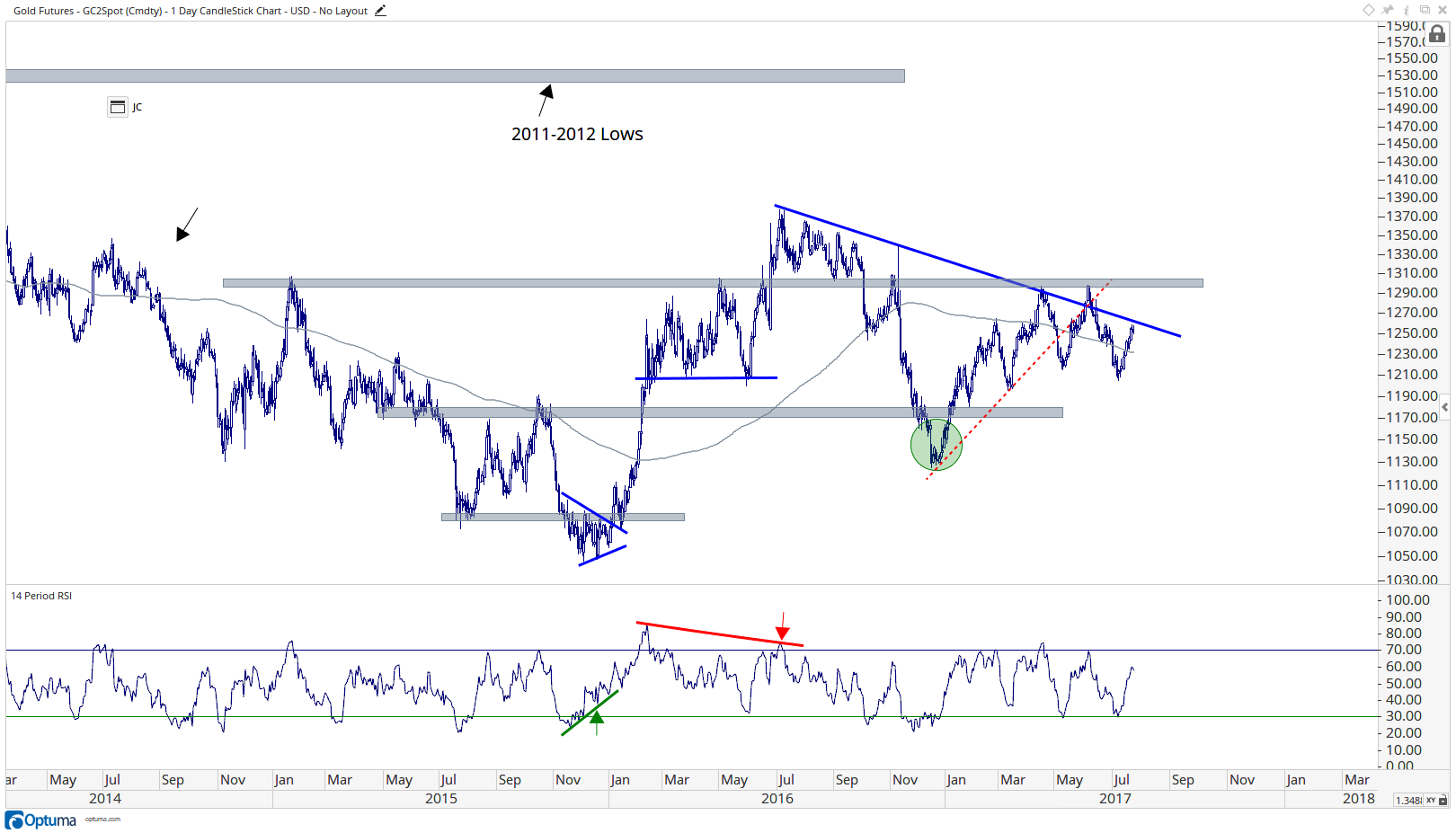 While I do like that failed breakdown and bullish momentum divergence in Silver, we are still below a downtrend line from the 2016 highs and below a downward sloping 200 day moving average. So promising yes, uptrend no. 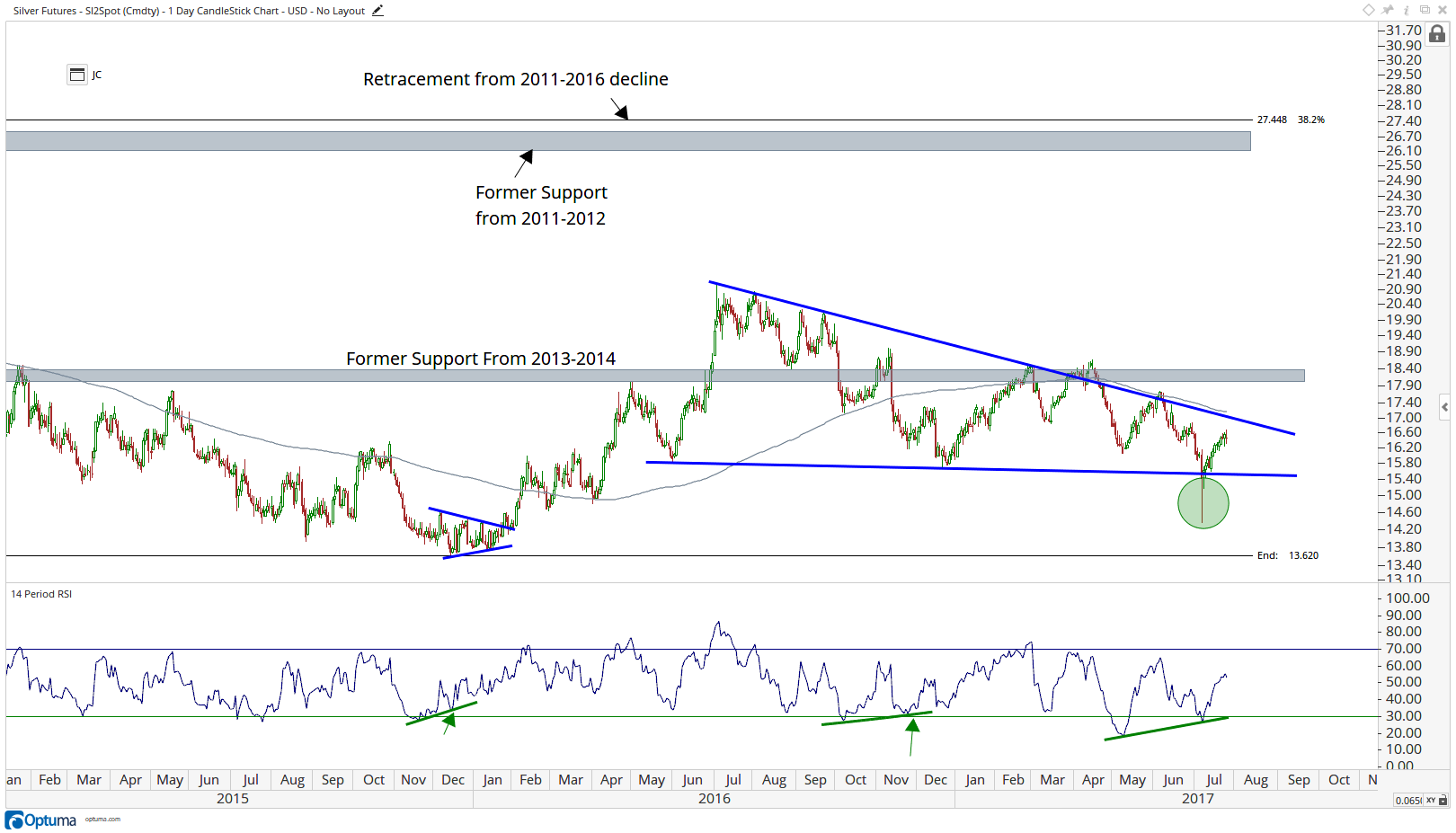 Here is Platinum. If we are to break out above that downtrend line from last year’s highs, I think that would be a real sign of risk appetite. There’s no question that would be a bullish sign. But we don’t have that. So we’re still below that downtrend line as well as a downward sloping 200 day moving average. A break below support from the past 7 months should signal lower prices for these metals as a group. 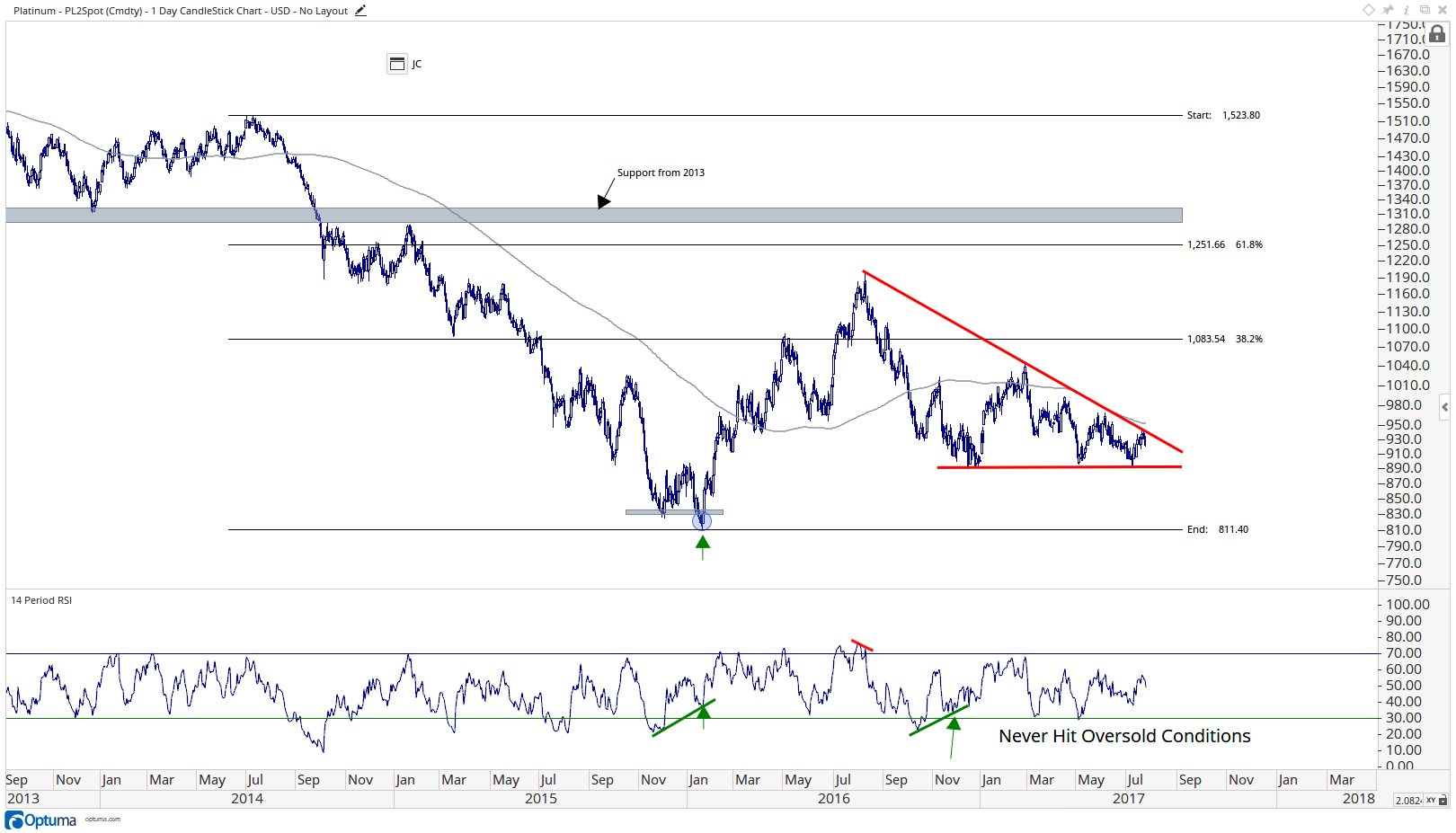 This is the equally-weighted Precious Metals Index where each of these 3 metals is equally represented in this chart. We can really identify the trends this way. If we are to break this uptrend, I would argue there is likely much more downside for precious metals. The ability to remain above it would be evidence of resiliency and would be another feather in the hat for the bulls. I think Platinum breaking out above this range would be a great compliment to have here if you’re bullish metals. 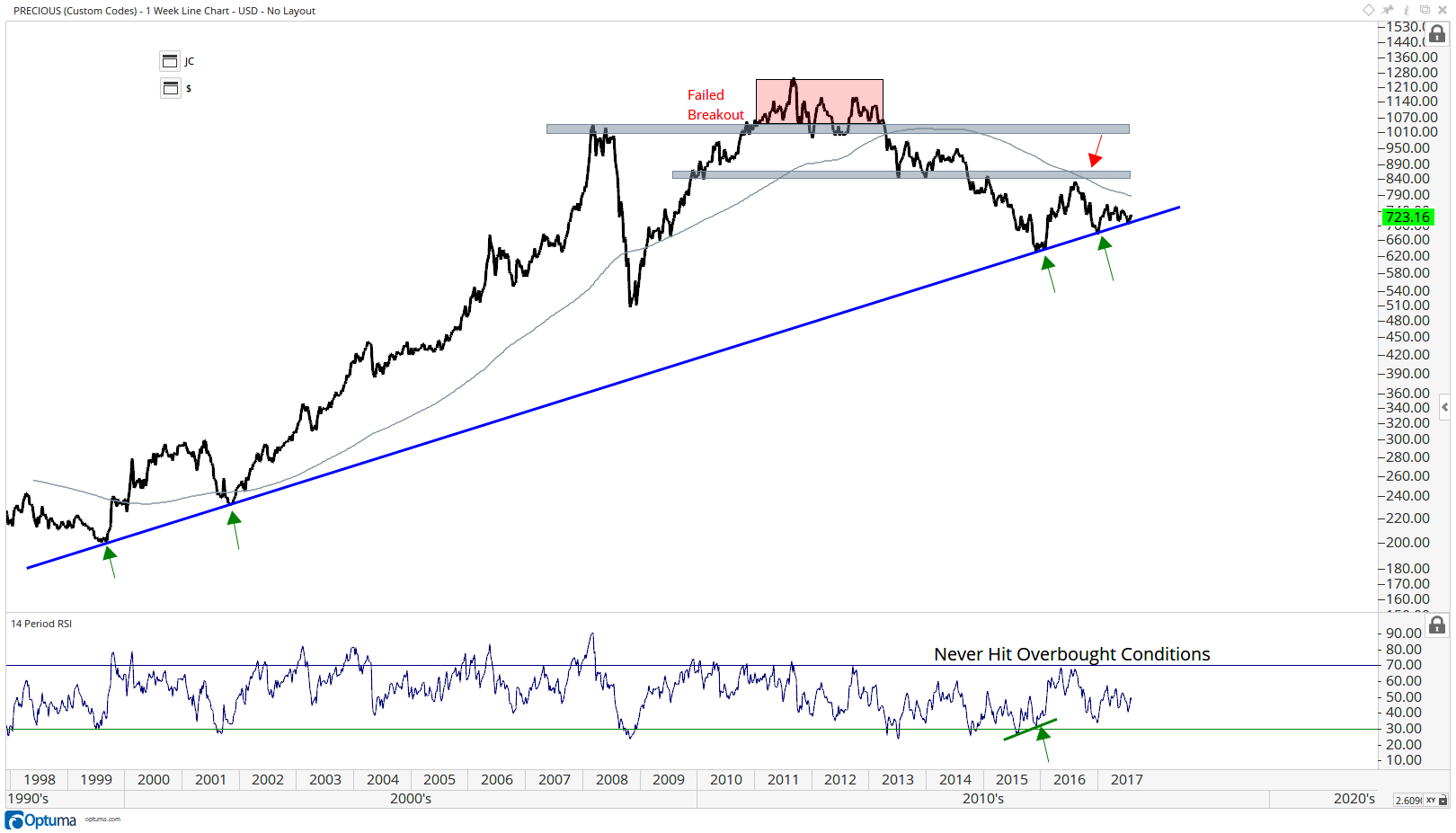 Here are the Gold Miners themselves. These are the stocks, as opposed to the actual metals above. I see downtrends, not uptrends. If they start to break out, then we can talk about something more substantial. 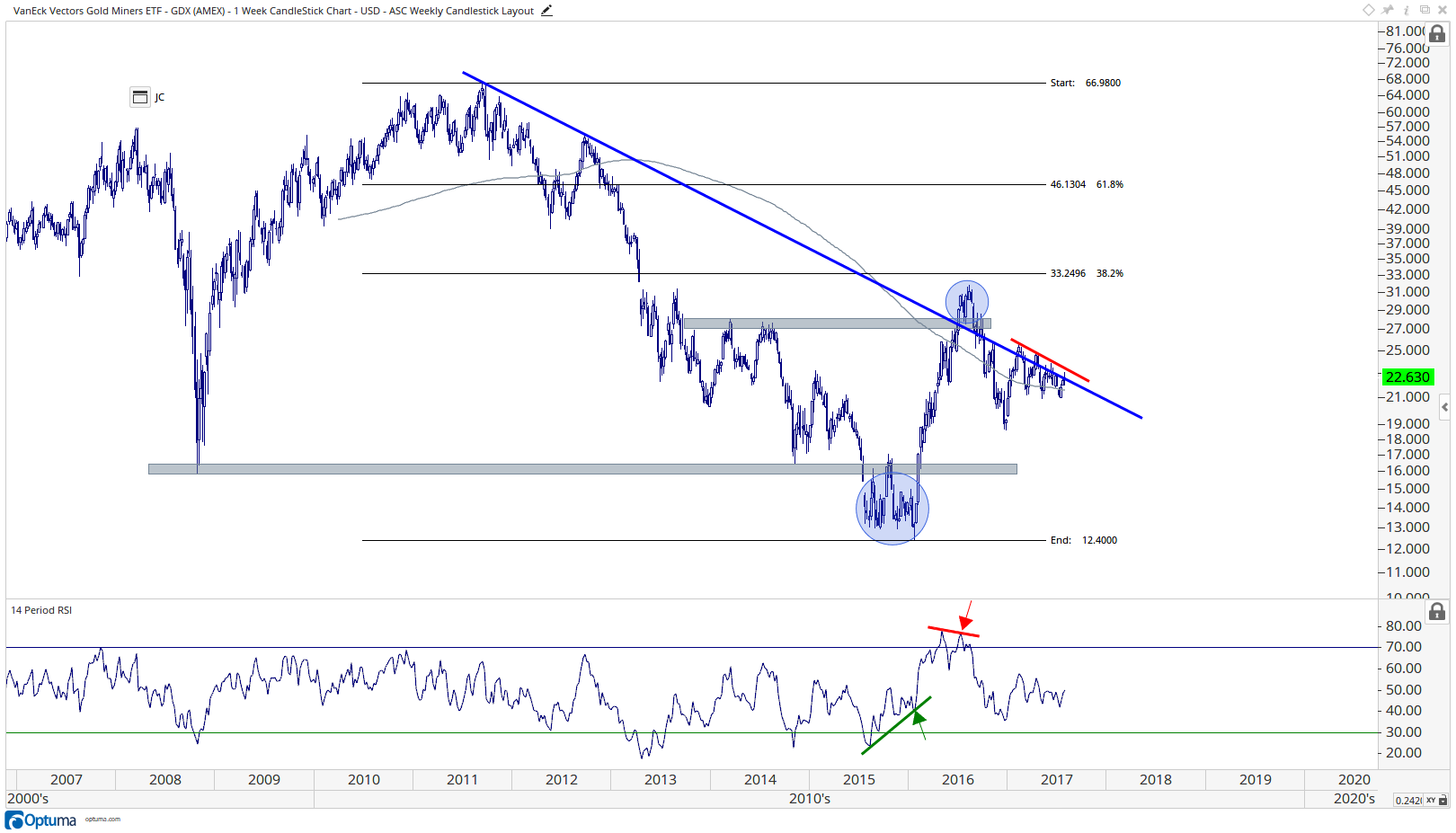 Here is the first positive sign I see in Precious Metals. With new lows in the PHLX Gold Silver Index this month we had a bullish momentum divergence. Now the index has broken out above the downtrend line from last year’s highs. That’s not nothing. 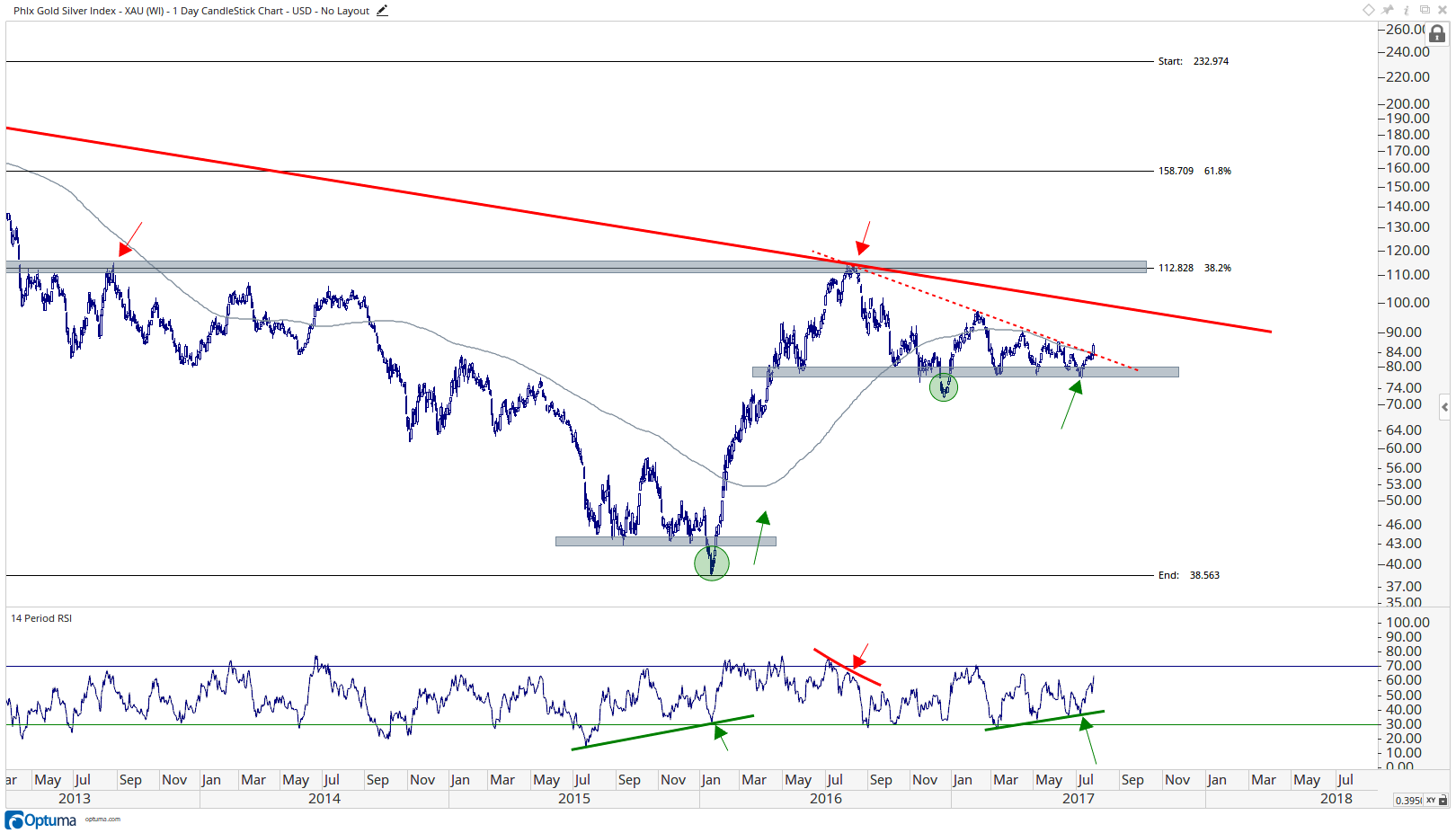 Here is the Gold Bugs Index. This is another one that looks positive. It does not include Silver producers like the PHLX index above. This is just 15 Gold stocks. To me, there is a good chance that there is a positive outcome here. 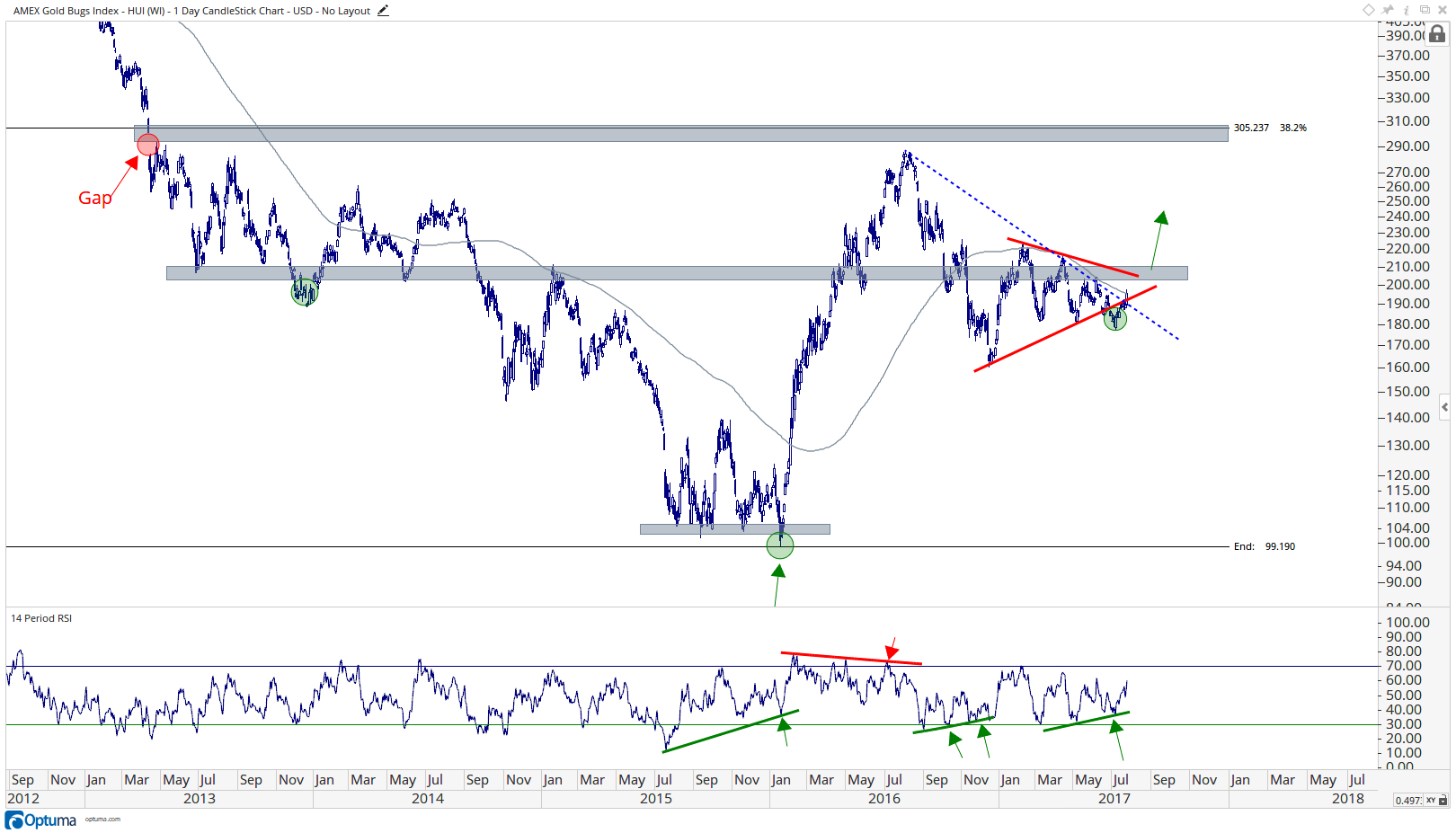 Here’s an interesting bullish momentum divergence in Barrick Gold, one of the most important stocks in the entire group. Could we see an upside resolution out of this year long range? I think it’s entirely possibly. But I’m not willing to bet on it right here right now with prices near a flat 200 day moving average. 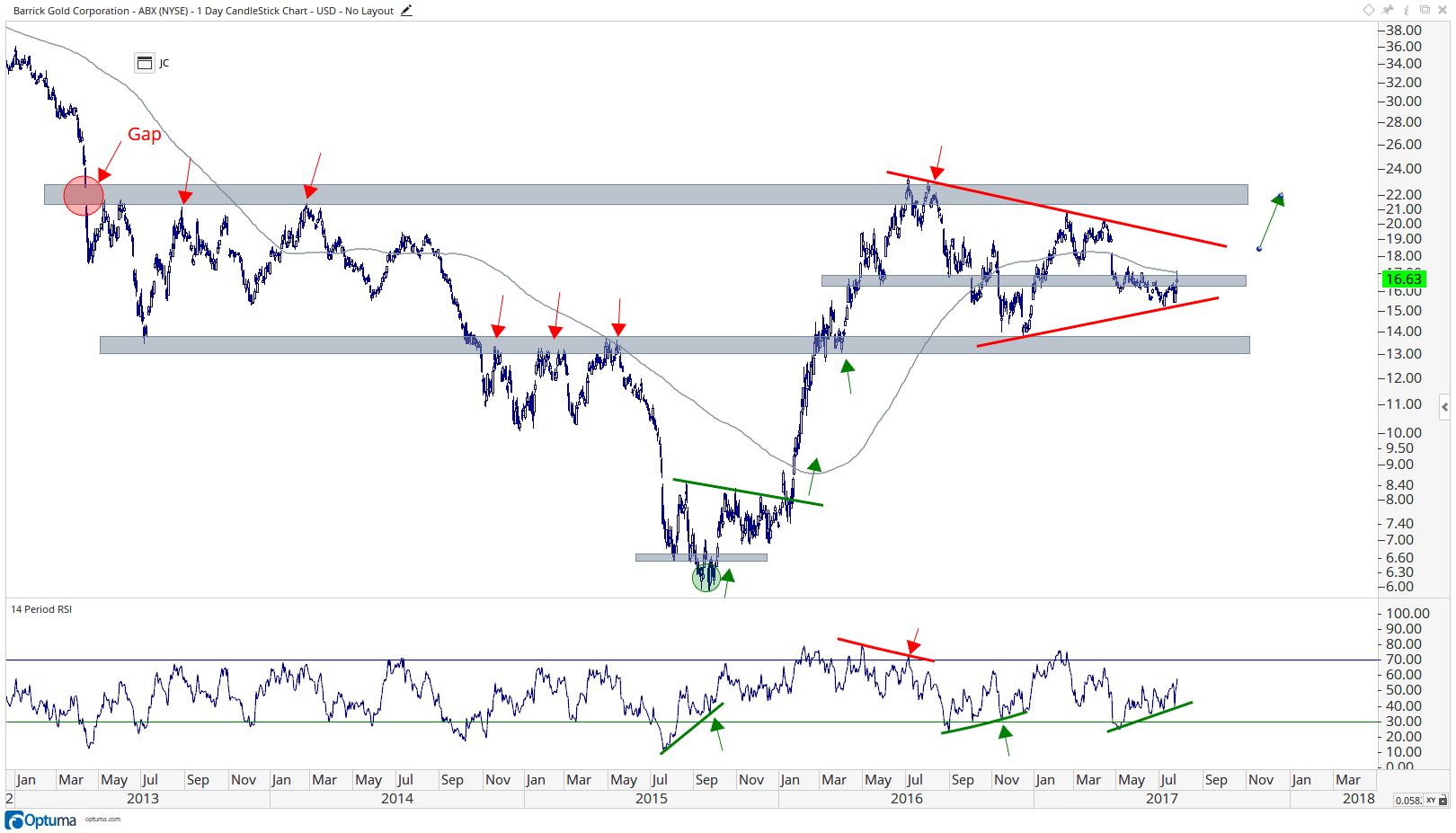 This is Newmont Mining, the other most important stock of them all and it looks much better. I really have to appreciate the strength here in what appeared to be continuation pattern lower for $NEM. The failed breakdown and strong bullish momentum is hard to ignore. I think if you’re going to be long Gold Miners $NEM is the way to do it. I like it long if it’s above $34 with a target above $46: 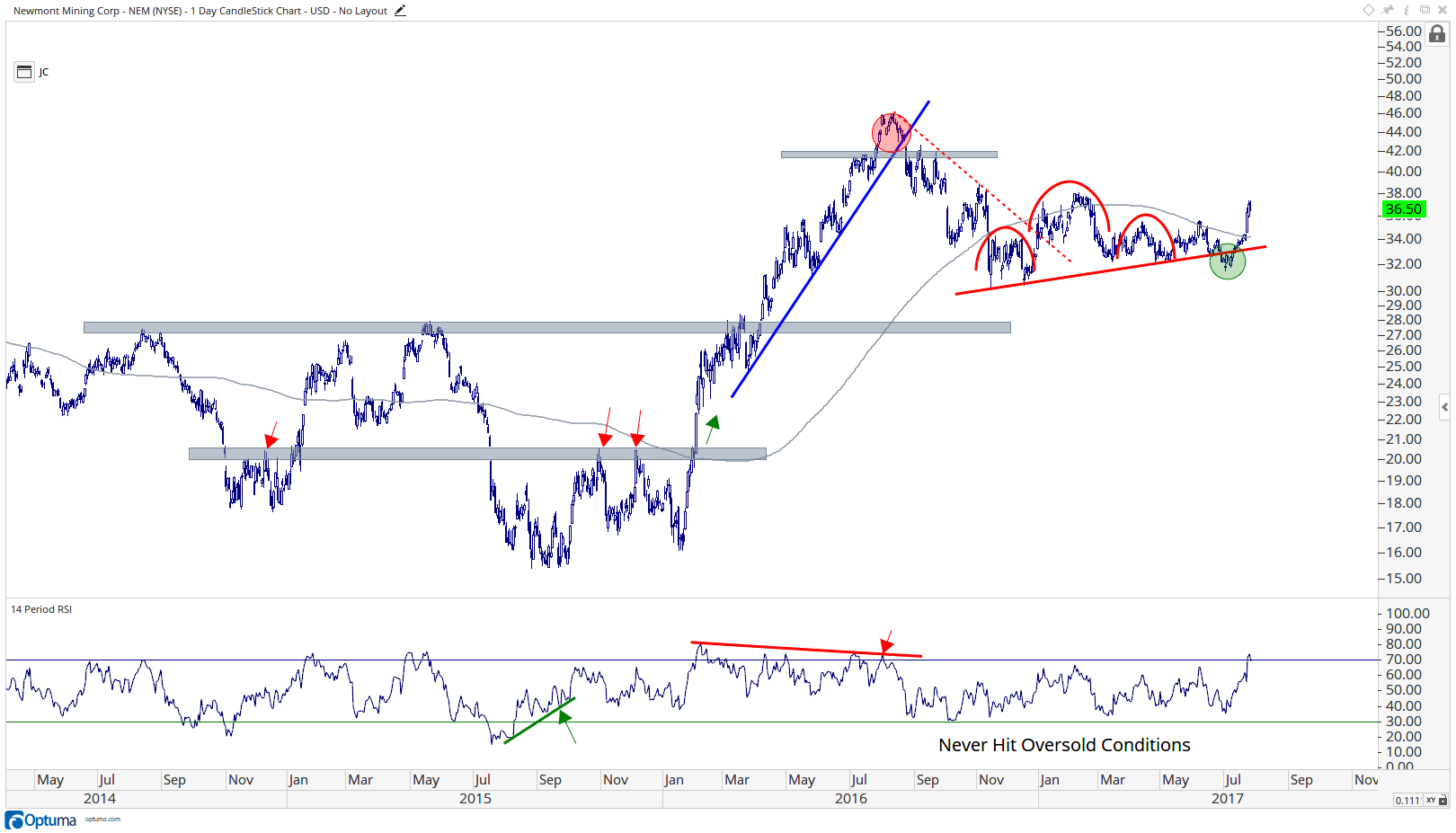 Iamgold has consistently been one of the strongest of the Gold Miners. Even when I’ve been a hater in the past, I’ve still pointed to the relative strength in $IAG. If/when Gold Miners do their thing, I would expect this one to be one of the leaders. I like it long if we’re above $4.75 with a target up near $7.50 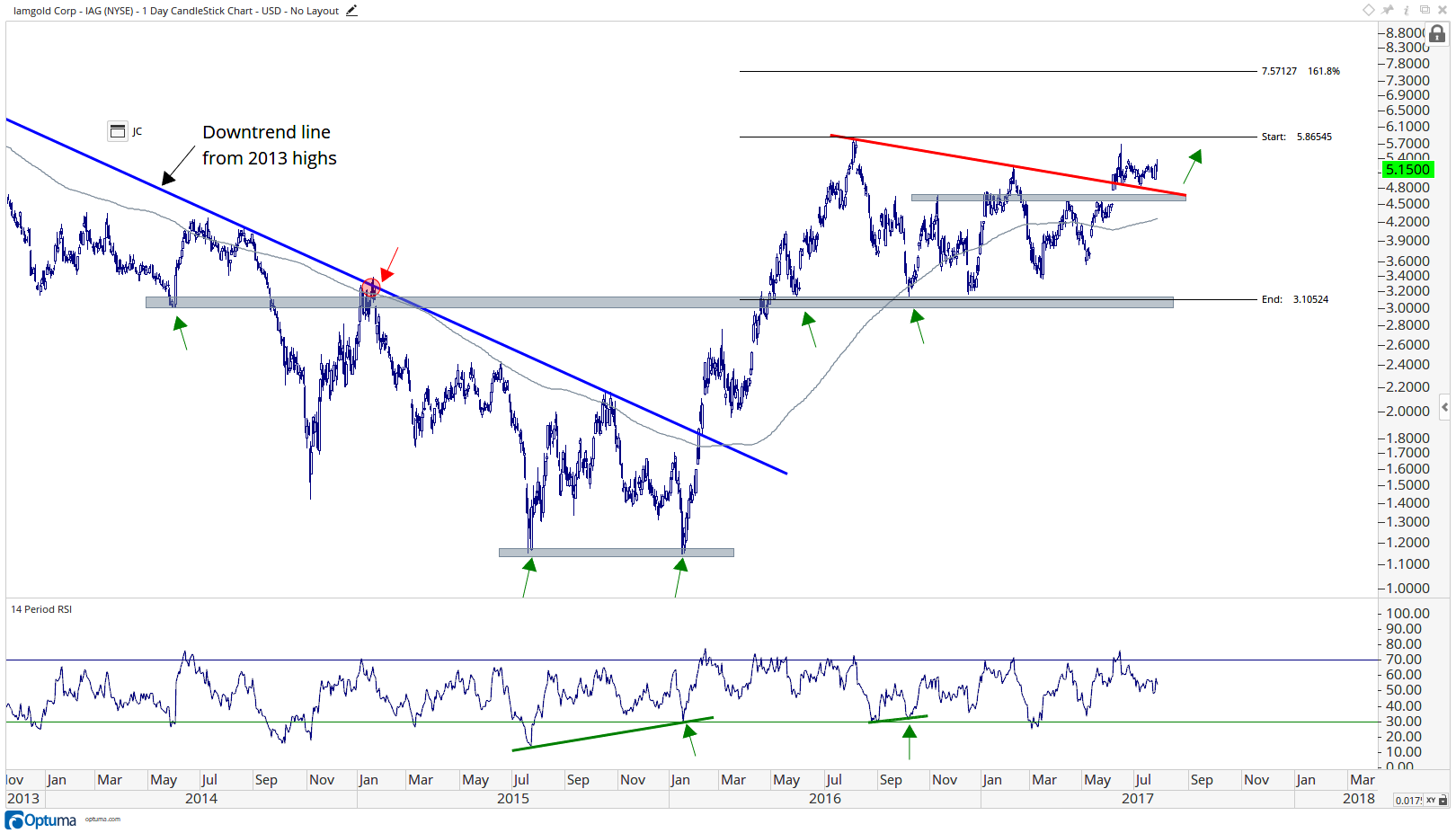 Another one that I normally mention as having relative strength is Pan American Silver. While price near that flat 200 day moving average annoys me, it would be irresponsible not to point out the high likelihood of a rally back above $21. If prices are above $17 this is a long with a target 4 points higher. 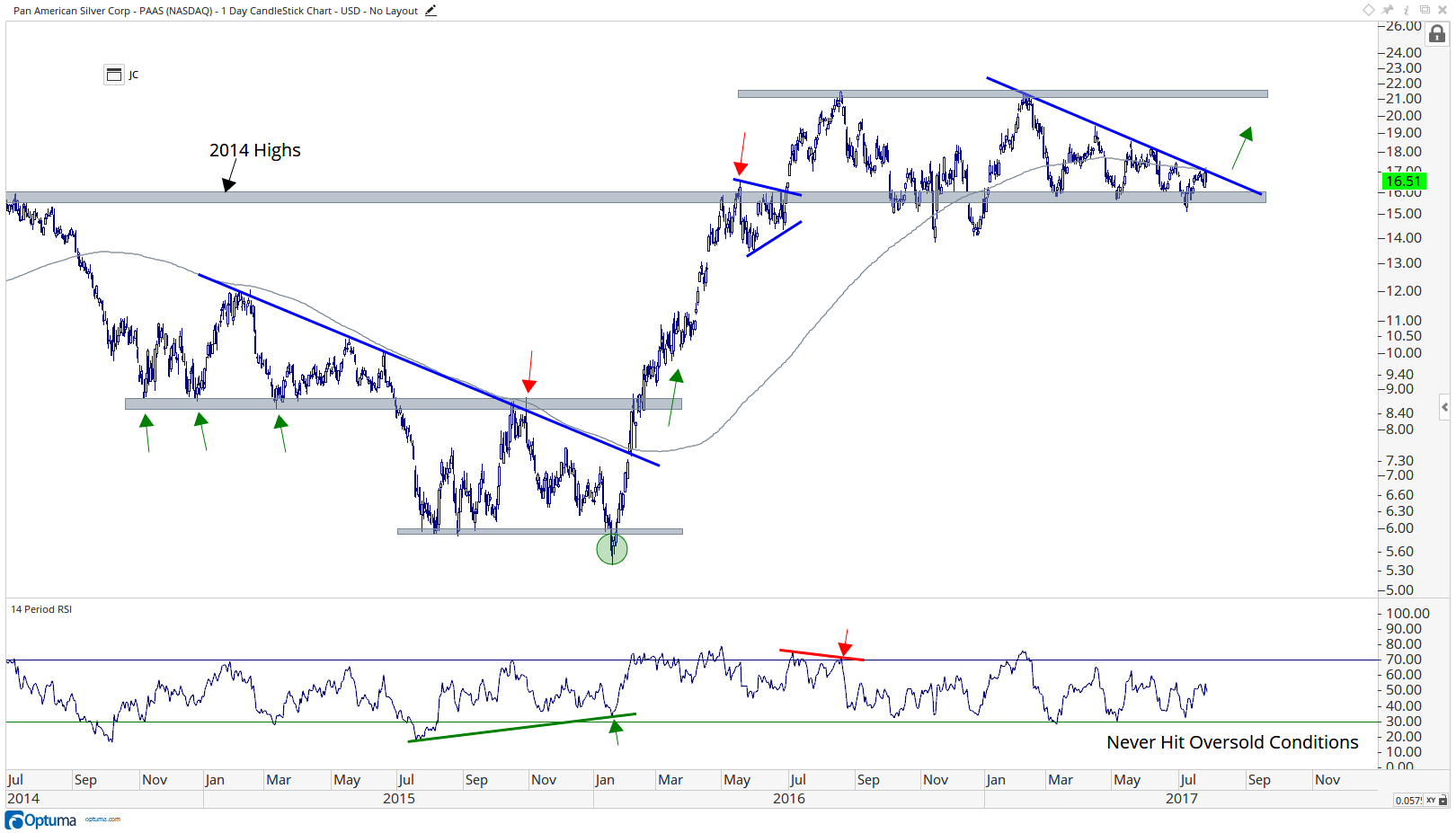 Royal Gold also looks strong. If we’re above $83 then $RGLD is a long with a target above $103 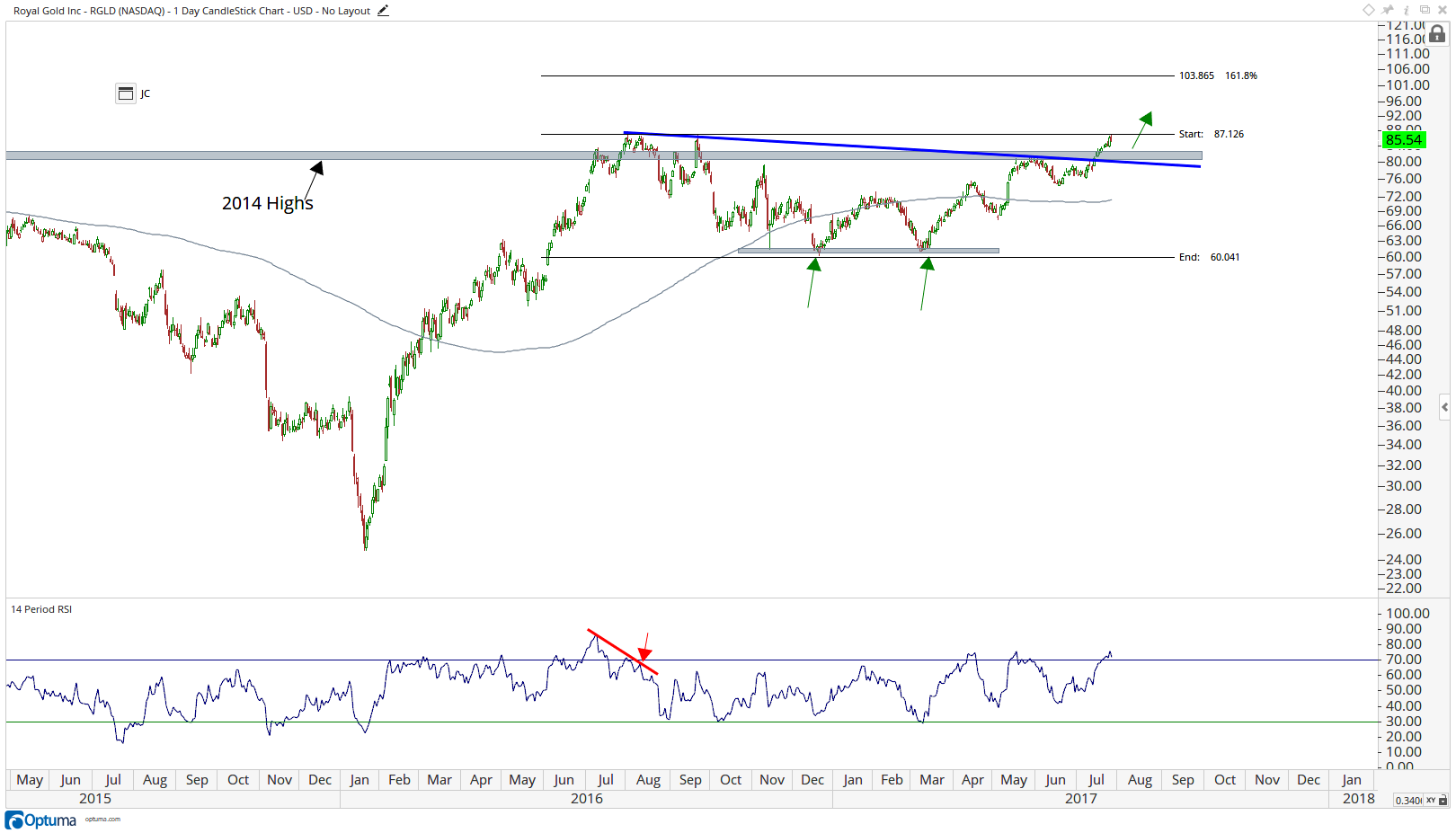 Now, from an intermarket perspective, here is a chart of Gold relative to the S&P500. It’s still a downtrend. Until that changes, we need to respect it 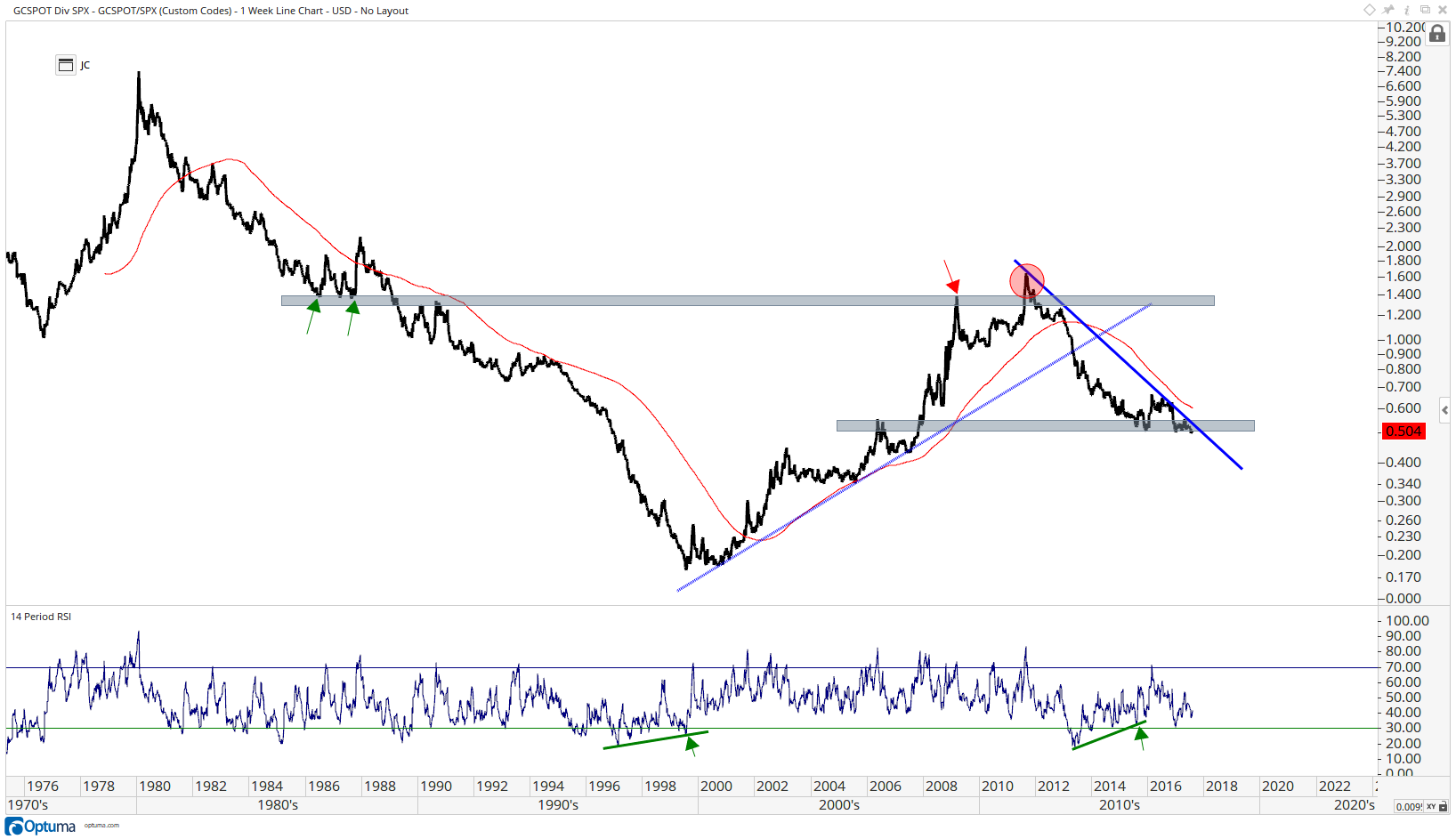 We can see similar opportunity cost vs Copper. This is the Gold/Copper ratio breaking the uptrend line from the 2006 lows 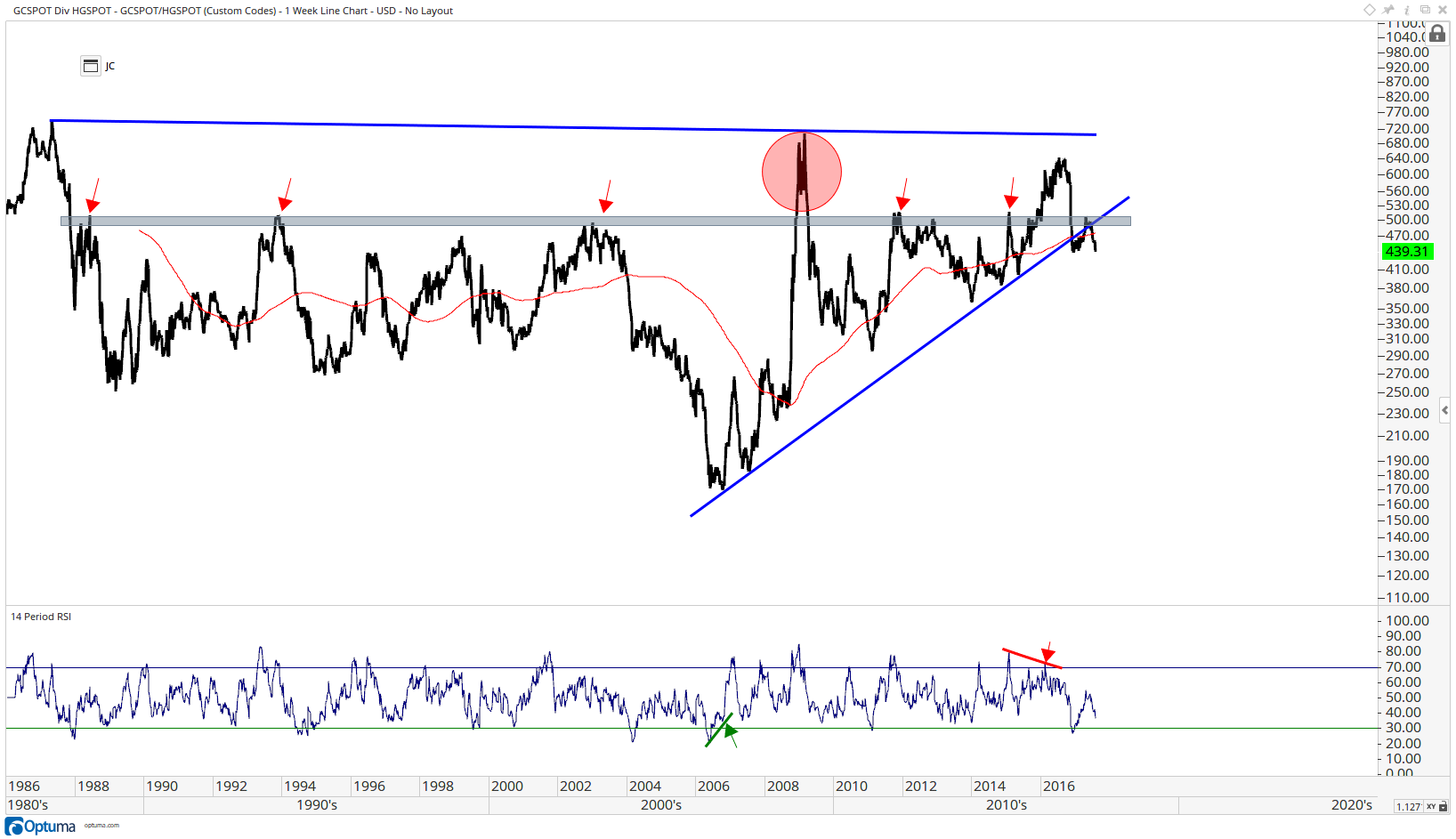 Here is Gold vs US Treasury Bonds in “Battle for safety”. I try not to look at these like that because a lot of time it doesn’t work out that way. I see money flow into Japanese Yen when it is most scared, not either of these two. But I do think it is important to point out we are approaching an apex here for one over the other. We’ll know soon:

Gold vs US Treasury Bonds (futures) 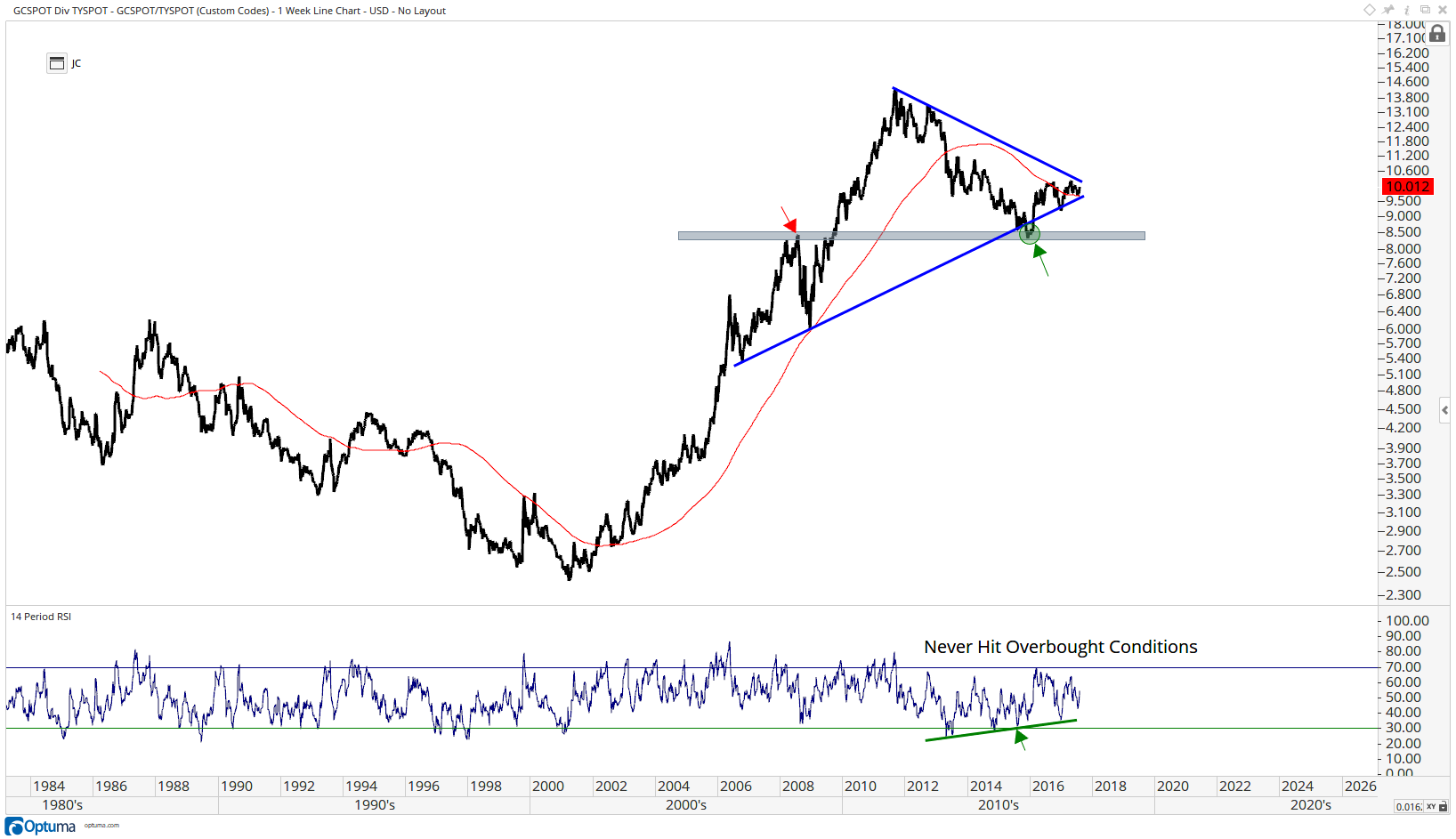 One of the more interesting charts of the bunch is Gold vs Platinum. The way I live my life is that the more times a level is tested, the higher the likelihood that it is going to break. If we are to break out above over 18 months of resistance, I think there could be some serious upside in this spread. We want to be long Gold and short Platinum if this ratio is above 1.36 with a target up near 1.65 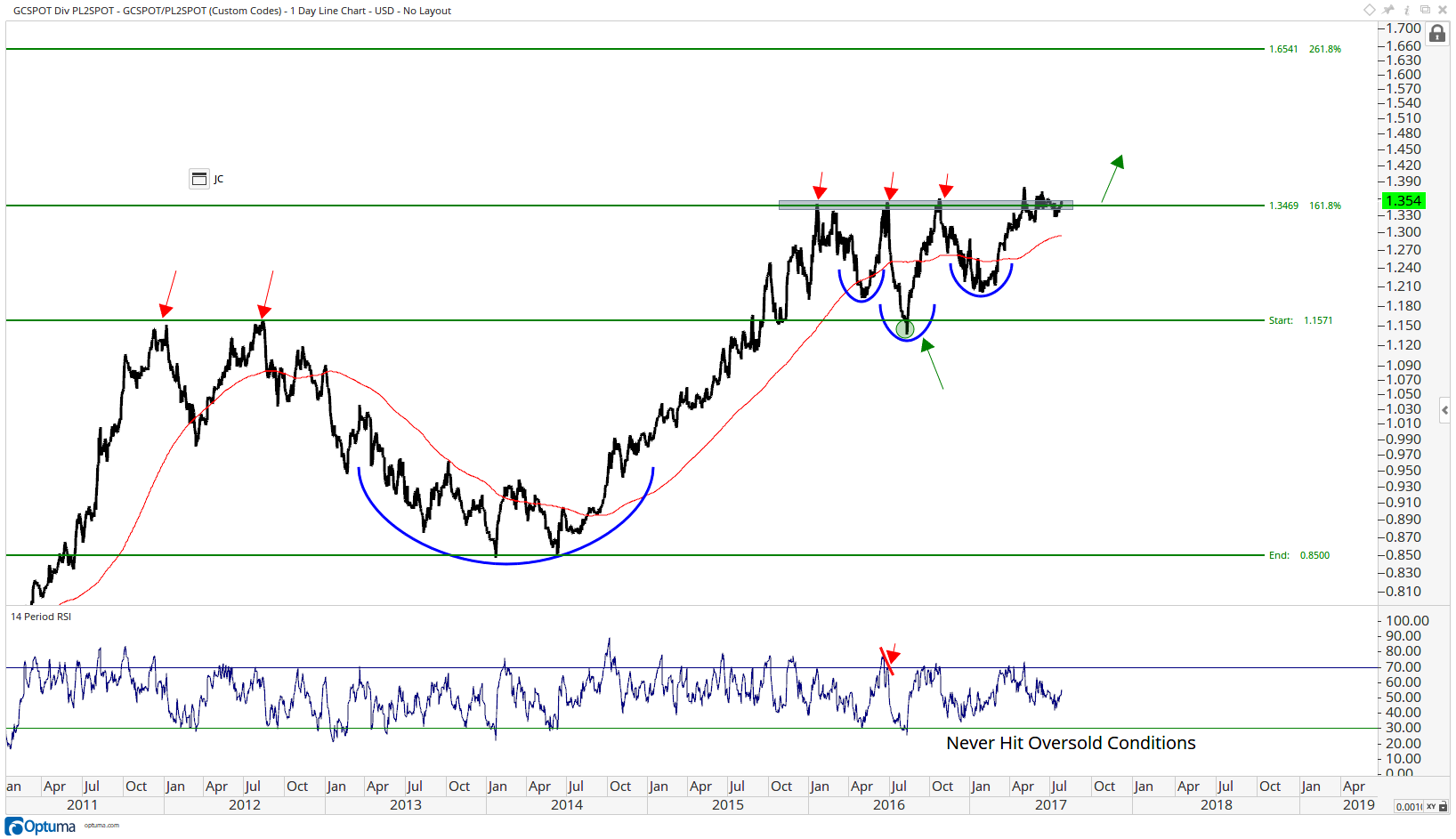 I think the overall message here is that there is potential in metals, but at this point the opportunity risk doesn’t seem very well-defined. This suggests not being short metals, unless we start to break down in Platinum and the equally-weighted metals index mentioned above. If neither of these occur, then I believe there is a very high likelihood that some of the stocks we mentioned above do well in the coming months and quarters.

The one thing I will say is the precious metals are still in a downtrend, particularly relative to other asset classes like stocks. So this is something we need to be aware of. Moving forward we don’t want to choose gold over stocks, but we are willing to step in and buy a few that present favorable risk vs reward opportunities.

That’s what I’m seeing in metals