With volatility spike in British Pounds, the more interesting story to me is how stocks are pushing up against the former all-time highs in 1999. Since that historic era in the stock market, British stocks have continuously attempted, and then failed to break through and finally make a new all-time high. The London FTSE 100 has been trying to stay above that historic market peak for almost 17 years.

Here is a chart of the London FTSE 100 going back to the late 1990s. The more times that a level is tested the higher the likelihood that it breaks. The reason is that there comes a point where anyone willing to sell at those levels will have already sold, ultimately leaving fewer sellers than buyers. This is when you get a “breakout”: 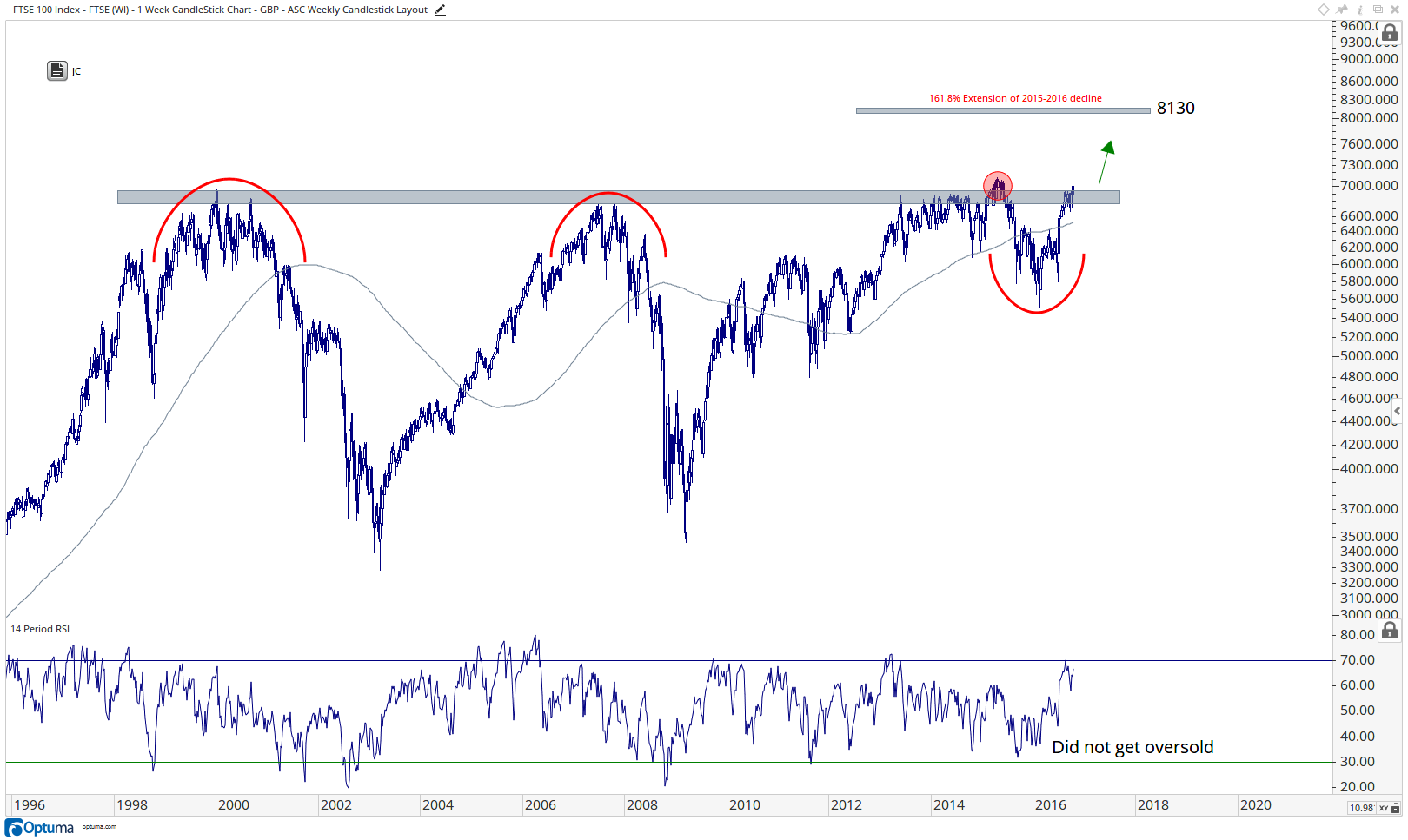 I think this is what we have here. I like to measure momentum based on overbought and oversold conditions. The fact that momentum (14-week RSI) didn’t see any oversold readings (below 30) on this decline since last year, is a sign of strength. That type of behavior is characteristic of bull markets in price.

I think we finally break out here to new all-time highs. We want to be long British Stocks if we’re above those 1999 highs in the FTSE 100 with a target up near 8130 in $FTSE. This level represents the 161.8% Extension of the 2015-2016 decline.  We want to be selling strength into that level. It represents approximately 16% higher for this British stock market index. We’re talking about names like BP, Royal Dutch Shell, HSBC, Vodafone, Unilever, GlaxoSmithKline, etc.

Looking shorter-term, here is a daily chart of the FTSE 100 going back a couple of years. What it looks like to me is that this breakout to new all-time highs is not going to come easy. There is clear overhead supply just above 7100 that was trouble last Spring, just around the time that the S&P500 was putting in its high: 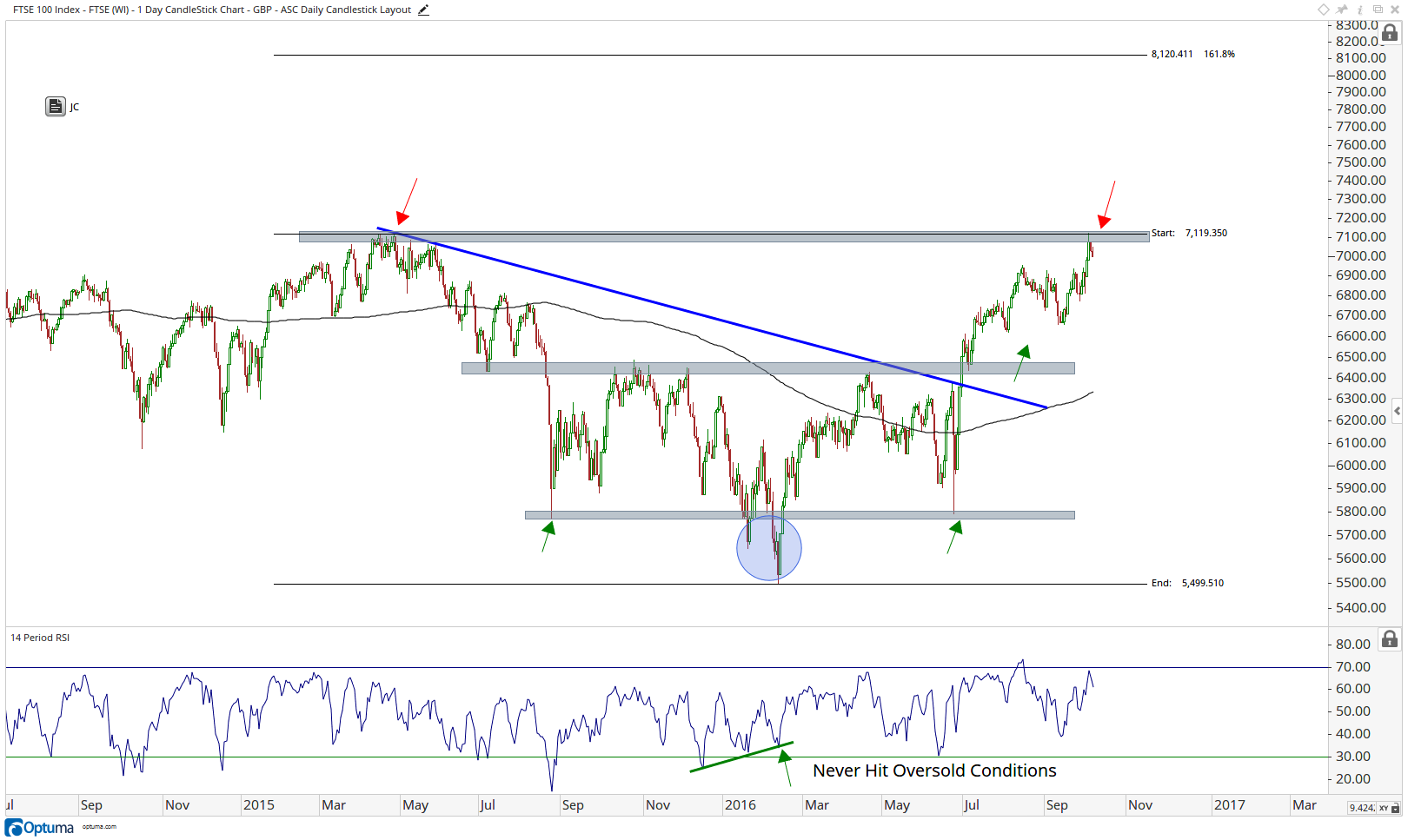 I like the 10-month bottoming process in this thing from last Summer until late June of this year. But at this point, our upside objectives have been hit, which were last year’s highs. I would expect some kind of digestion of gains near this level. The market has clearly proven that there is overhead supply. In other words, more sellers than buyers here, for whatever the reason.

I think we do ultimately breakout, and we want to either buy it if we’re above last year’s highs or after further consolidation. We’ll reevaluate once either of those occur. Taking a step back, I’d rather err on the more bullish side based on the longer-term outlook. So we’ll be looking to buy this once again at some point in the near future. Also check out $EWU, although it is US Dollar denominated, it gives you exposure to these British stocks. You would have still to hedge out $GBPUSD if you want to have a Pound denominated position.

Either way, I think the fact that we keep bumping up against this level since 1999 suggests we’re going to have a serious breakout soon. I want to be a part of it when it happens. For you guys who don’t care about foreign equities, I would argue that the London FTSE100 finally breaking out to new all-time highs after almost 17 years is probably not going to happen while the S&P500 is crashing. We see high correlations here, so I would expect simultaneous strength in both US and British Stock Markets if the FTSE100 can finally get going.

Do you want weekly updates on these charts? Click Here to start your 30-day risk free trial.