Here is an interesting gauge of market sentiment coming in with some extreme readings this week. Investment newsletter writers are recommending the highest exposure to stocks in 13 years. Take a look at this pretty awesome chart below. We obviously take this as a contrarian indicator since these guys are wrong so often. The stats really are staggering.

“The survey of investment newsletter writers from Hulbert Financial Digest is theoretically better than most, since it focuses on actual trading recommendations instead of sometimes-ambiguous opinions.  It’s a step closer to a real-money indicator than other surveys.” 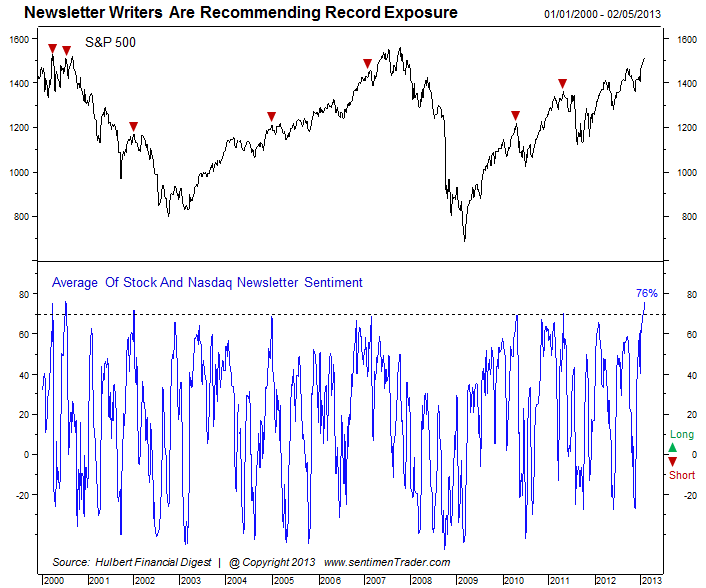 “There have been a total of 9 weeks when the combined level neared 70% (a couple of them were clustered together).  A month later, the S&P 500 showed a negative return every time, a median of -3.1%.  Its maximum gain during the next month averaged only +0.1% (using weekly closes) while the maximum downside averaged -4.4%.

I guess you can add this to the extreme bullish sentiment that we’re seeing from Active Managers. In a recent poll that came out from the National Association of Active Investment Managers (NAAIM), the average manager last week was holding a net long position of 104%. So not only are they long stocks, but they’re leveraging their portfolios to take on even more risk.

It’s interesting that a lot of the bears are capitulating and throwing in the towel. “The bears of the group have given up”, says Will Hepburn, president at Hepburn Capital Management and originator of the survey. The NAAIM measures the equity exposure of its roughly 160 members that manage about $20 Billion in assets. The problem with the poll is that it’s relatively new. The survey began in July of 2006. But last week saw the second highest mark in survey history.

Just something to think about. Also see: Price Action Is Warning Us