It’s still not all that pretty out there underneath the surface.

But new all-time highs in the S&P500 is probably not something we should ignore.

History has taught us that when we see that, there are usually more new all-time highs coming shortly after that. And then after that again….

This is an uptrend right?

Is there anything here that suggests it’s not?

The leader there is Technology, in both strength and in weighting.

The sector rotation over the past 15 months has now brought us back to Tech.

After underperforming for a while, Tech is back in front. And keep in mind that this sector alone represents over 24% of the entire S&P500 Index. To put things in perspective, the average weighting for all the other sectors is 6.8%.

Meanwhile, here’s a really interesting chart. This is Tech relative to the Nasdaq.

Look at that base:

It’s hard for the price of anything to go up with the Nasdaq as the denominator. But it looks like Tech is about to somehow find a way.

And when you look at what Consumer Staples are doing, it’s the exact opposite:

Look at Staples making new lows relative to both Consumer Discretionary and the overall market.

In healthy environments you tend to see Staples underperforming. And that’s exactly what’s going on here.

They look exactly the same don’t they?

With new highs in the SPY/XLP ratio (i.e. new lows in Staples relative), what does that mean for stocks around the world?

It’s the Consumer Discretionary stocks that are making new all-time highs, on both an absolute and relative basis 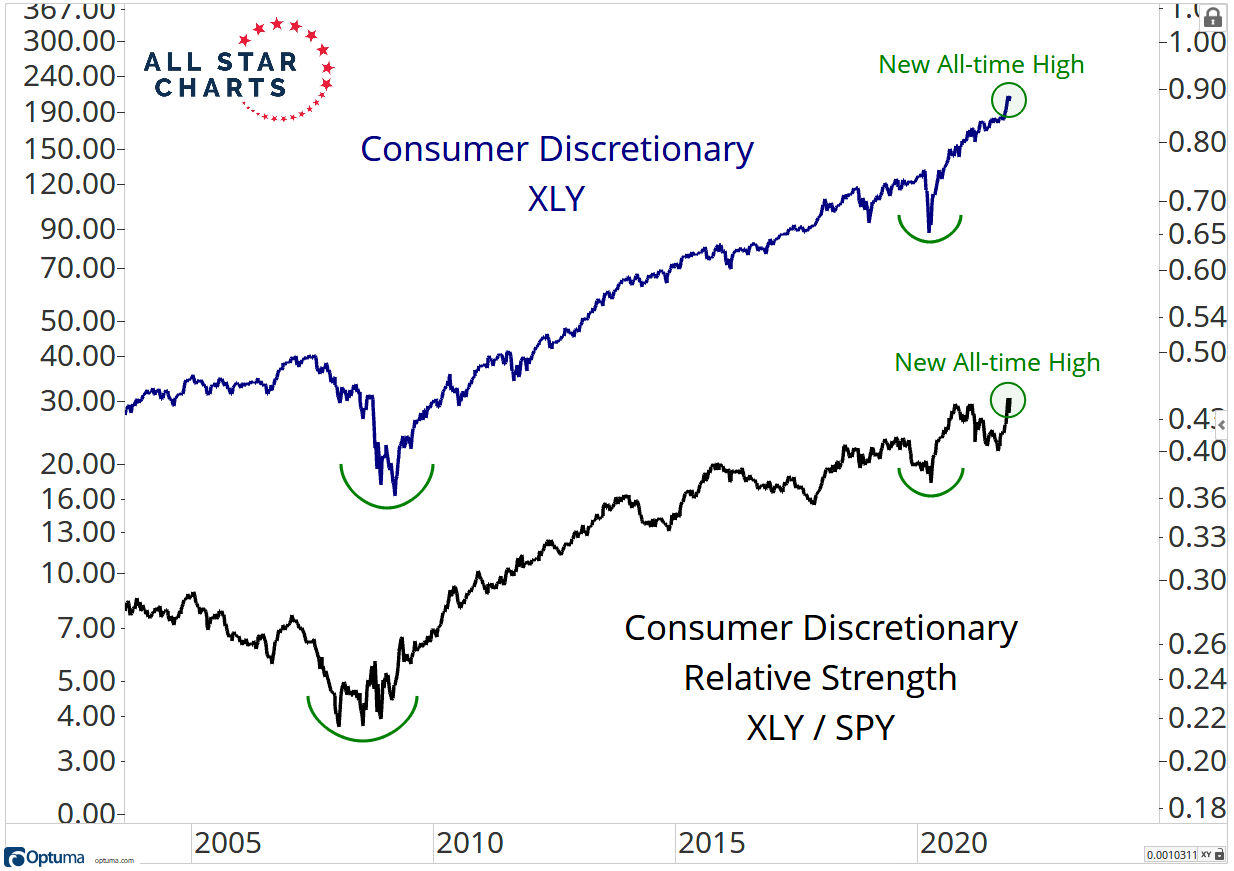 Look at these fresh breakouts:

I’m really encouraged by the base in Toll Brothers.

It’s been a while since prices were up here.

I remember last time this stock was at these prices.

Everyone in Miami, where I grew up, thought they were in the real estate speculation business. It was hilarious.

After a decade and a half of absorbing all of that demand, we are finally back.

This is what we call the top down approach. We start with the major indexes, work our way down to leading sectors, then the top industry groups within those sectors, and ultimately stocks that provide the best risk vs reward opportunity to express a given thesis.

SPX to Tech & Discretionary to Homebuilders to $TOL.

If you have any questions on our Top/Down Approach, give us a call:

We’ll be happy to help you out!