Thanks to everyone for participating in this Week’s Mystery Chart.

We went “bottom fishing” with this week’s selection, posting a mystery chart that featured a potential bottoming pattern complete with a failed breakdown, fast move higher, and a successful retest of support. These are all bullish characteristics that point to a higher likelihood of this being a true trend reversal.

As we noted earlier this week, bottom fishing is a risky game. But, if we play the bottoming process responsibly, the market could offer us some delicious rewards.

This week’s chart was a ratio of the BRIC countries ETF $BKF relative to the S&P 500 $SPY. Here it is: 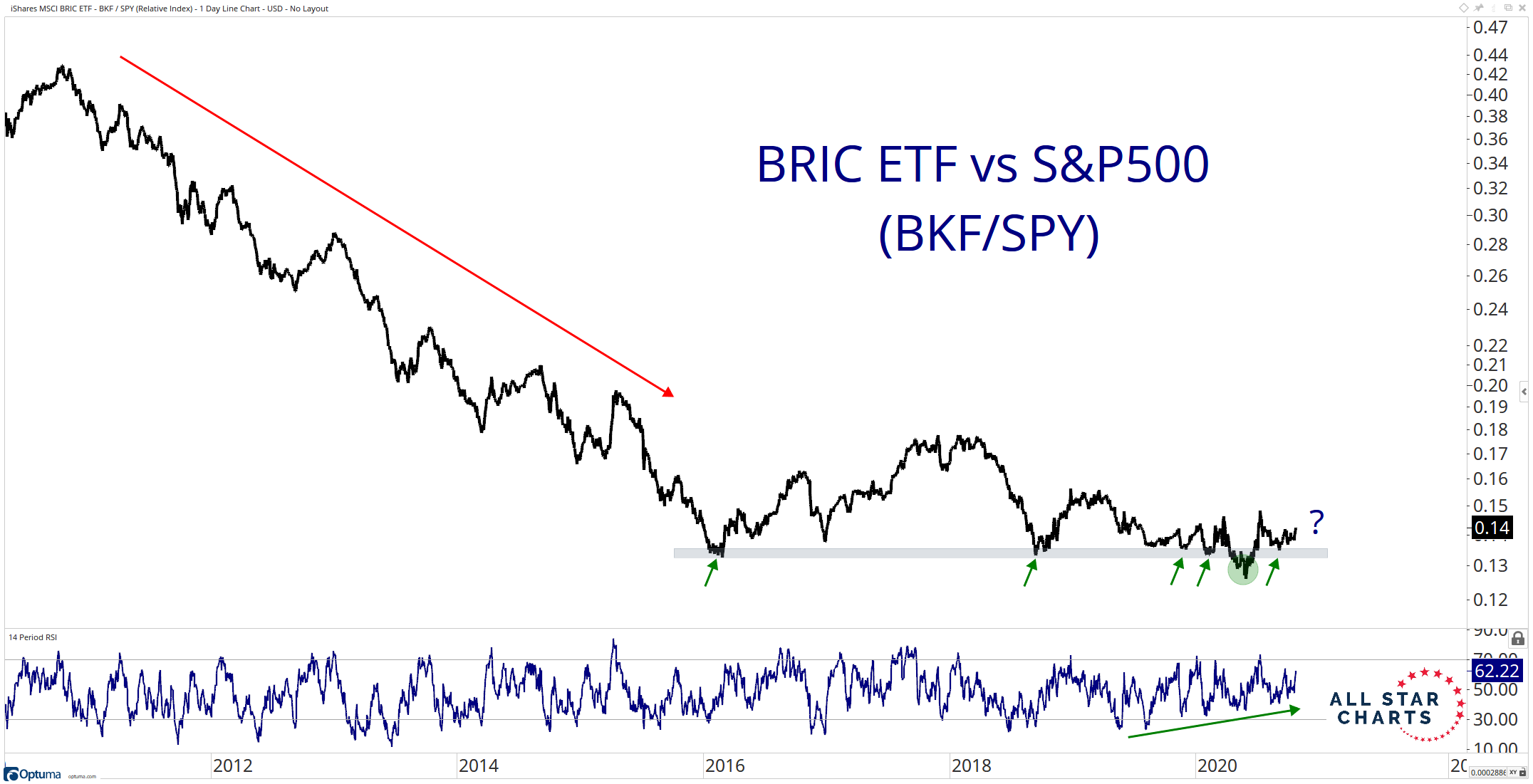 You can clearly see a positive momentum divergence coupled with a failed breakdown and yet another retest of those key former lows.

What did you think? Is this chart ready to reverse and head higher?

Or does the trend persist and resolve lower?

Most of you said you would bet in the direction of the underlying trend or wait for more info. We definitely need to see more data before we can make a clear bet in either direction. So to help get the ball rolling, let’s drill down to these BRIC components to get a better idea of what’s going on beneath the surface.

First, it’s important to note the huge overlap between BRICs and EM… 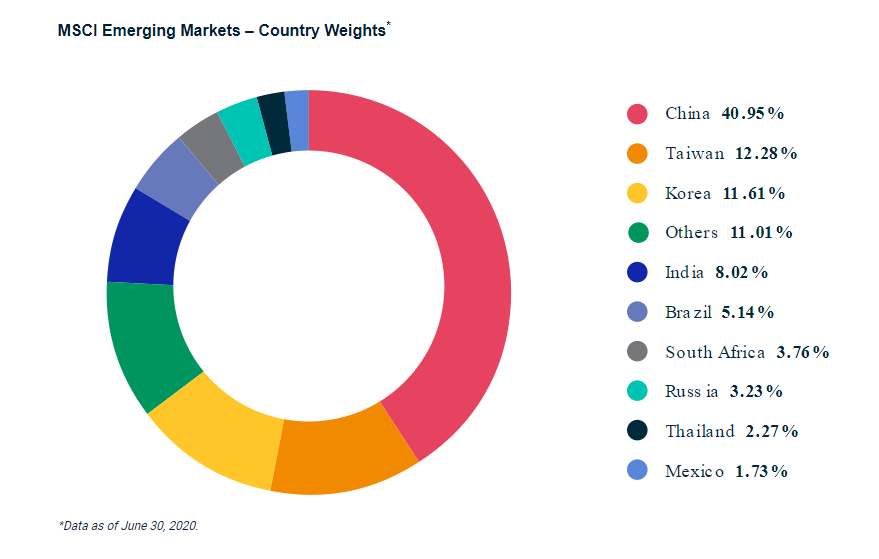 Together, the BRIC countries – China, India, Brazil, and Russia – make up almost 60% of the Emerging Markets Index $EEM. You can find the pie chart above, here.

Our outlook on how relative trends like these are likely to resolve usually comes down to looking at the internals of the various indexes themselves. In particular, we like to analyze the largest industry groups, countries, or individual components as they are responsible for driving much of the performance of the indexes.

Similar to how JC analyzed the largest individual components of EEM to make a determination on how the EM/SPY ratio is likely to resolve at this key inflection point, we’re going to dig into the individual BRIC countries as they are all a huge driving force for Emerging Markets as well.

For example, China makes up over 40% of EEM and more than a whopping 70% of BKF. Therefore, we need to be aware of the price action in China as it will be a huge input into our weight of the evidence approach and thus have a significant impact on our broader outlook for both the BRIC Index and Emerging Market Indexes.

This is no different than how we focus on the mega-cap growth/tech stocks that have a massive weighting in the major averages in the US. After all, these names will naturally drive most of the gains or losses for the Nasdaq and S&P and thus will play a huge role in helping us determine our overall bias for these indexes.

We can clearly see EEM/SPY is also at a key inflection point much like BKF/SPY, making this a logical place for a  bearish-to-bullish trend reversal to occur.

It’s important to note that due to the heavy overlap in their holdings, both of these ratio charts are likely to resolve in the same direction. Price action from the BRIC countries is going to be a major driver of Emerging Markets performance and could give us an early indication of where the EEM/SPY ratio is headed from here.

Take a look at the BRIC ETF $BKF on an absolute basis.

Like EEM, we have another massive, decade-long base approaching potential resistance at key former highs. The primary trend has also gradually turned higher, evidenced by the upward sloping 200-day moving average.

Now let’s drill down to each individual BRIC country to get a feel for what’s going on beneath the surface. First up is the smallest component, Russia $RSX. 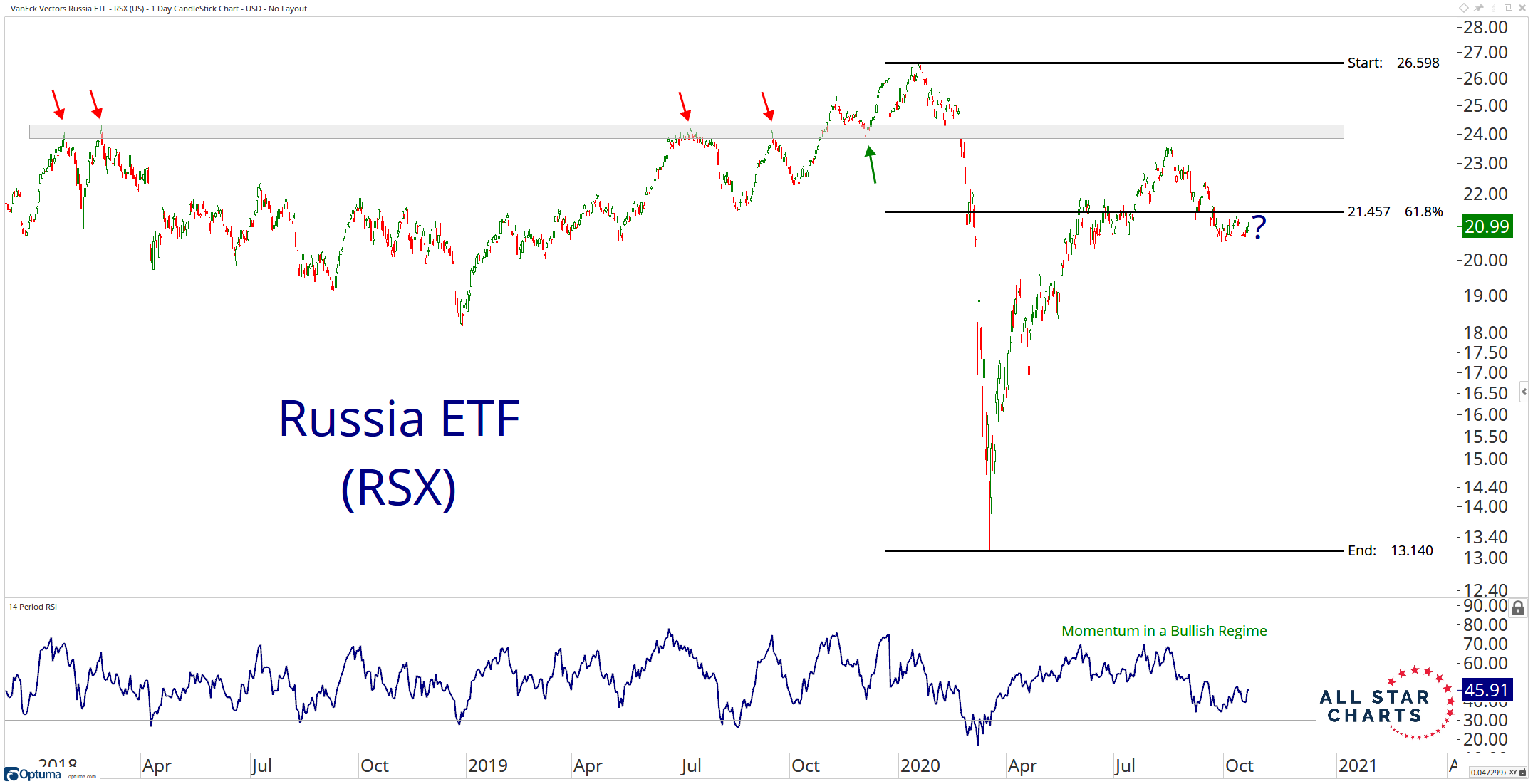 Momentum is in a bullish regime, but this is still a trendless mess. RSX could potentially turn lower at this 61.8% retracement, or break higher to test potential resistance at the former highs around 24. Price made what looked to be a sustained move above this level late last year, but broke lower during the Q1 selloff.

Bottom line, there’s still plenty of work to do here. For now, we want to approach this with a neutral bias at best. We also want to give this the least weighting of the four countries as it represents a very insignificant percentage of both indexes.

Next up is Brazil $EWZ, arguably the messiest of the BRIC charts right now: 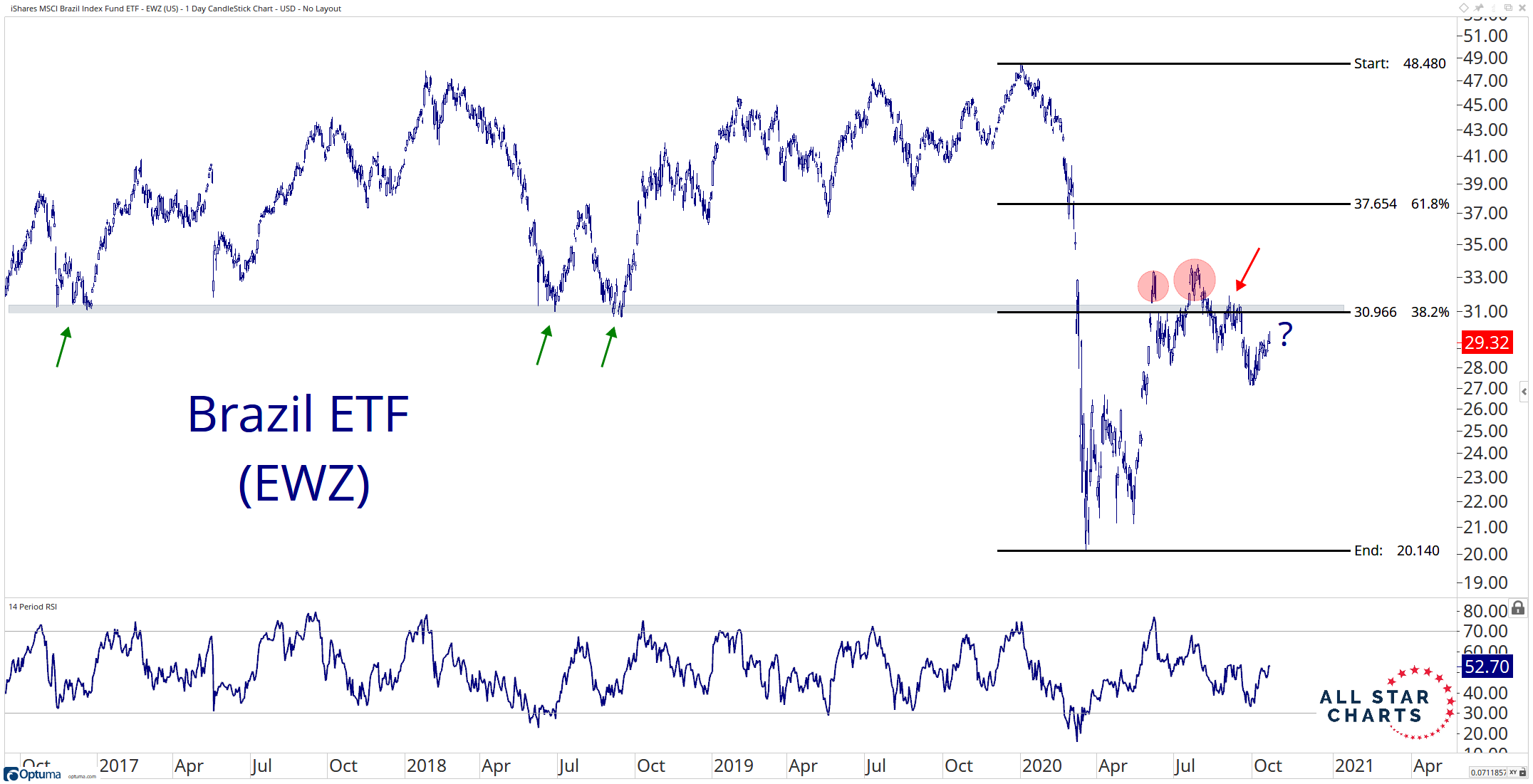 EWZ is once again trapped beneath the critical 31 level that has acted as a key level of interest since 2016. We’ll need to see if price can recapture this level after two failed attempts earlier this year. As long as we’re below it, the risk is to the downside for Brazil. Similar to Russia, Brazil does not make up a very material portion of either index.

The next two charts are the most important as these two countries together make up nearly 90% of the BRICs as well as roughly 50% of Emerging Markets. 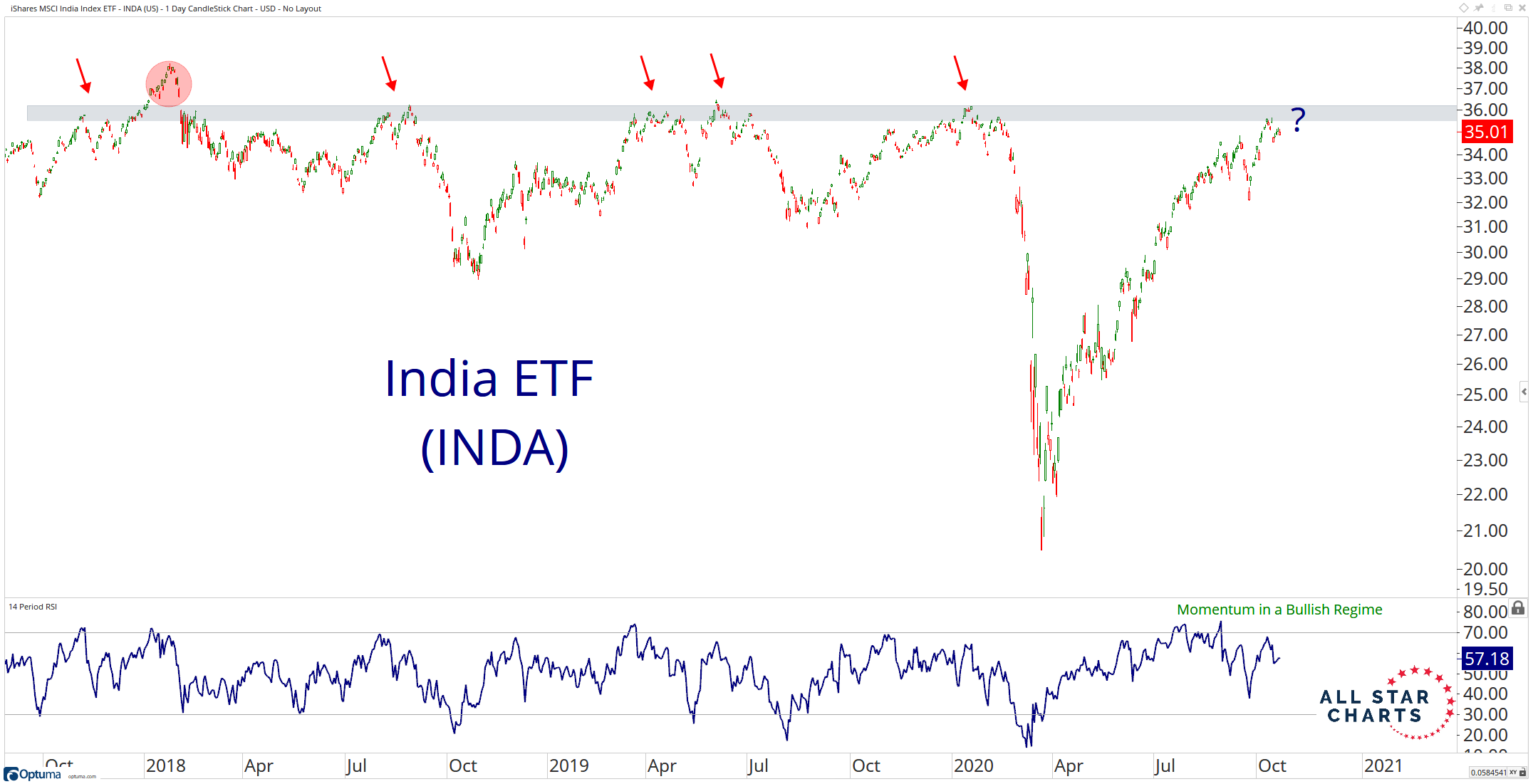 Here we have a much stronger setup as INDA has built out a nice base and is currently pushing back towards a handful of key former highs near 36. This area has acted as strong resistance for about 3-years now as price has consistently failed to break above it.

We’ll be watching closely to see how price reacts at this level in the coming days/weeks. Above it, and the bias is definitely to the upside. Below it, and this remains a sideways consolidation for now.

Finally, there’s China $ASHR, by far the largest, and arguably the strongest component. 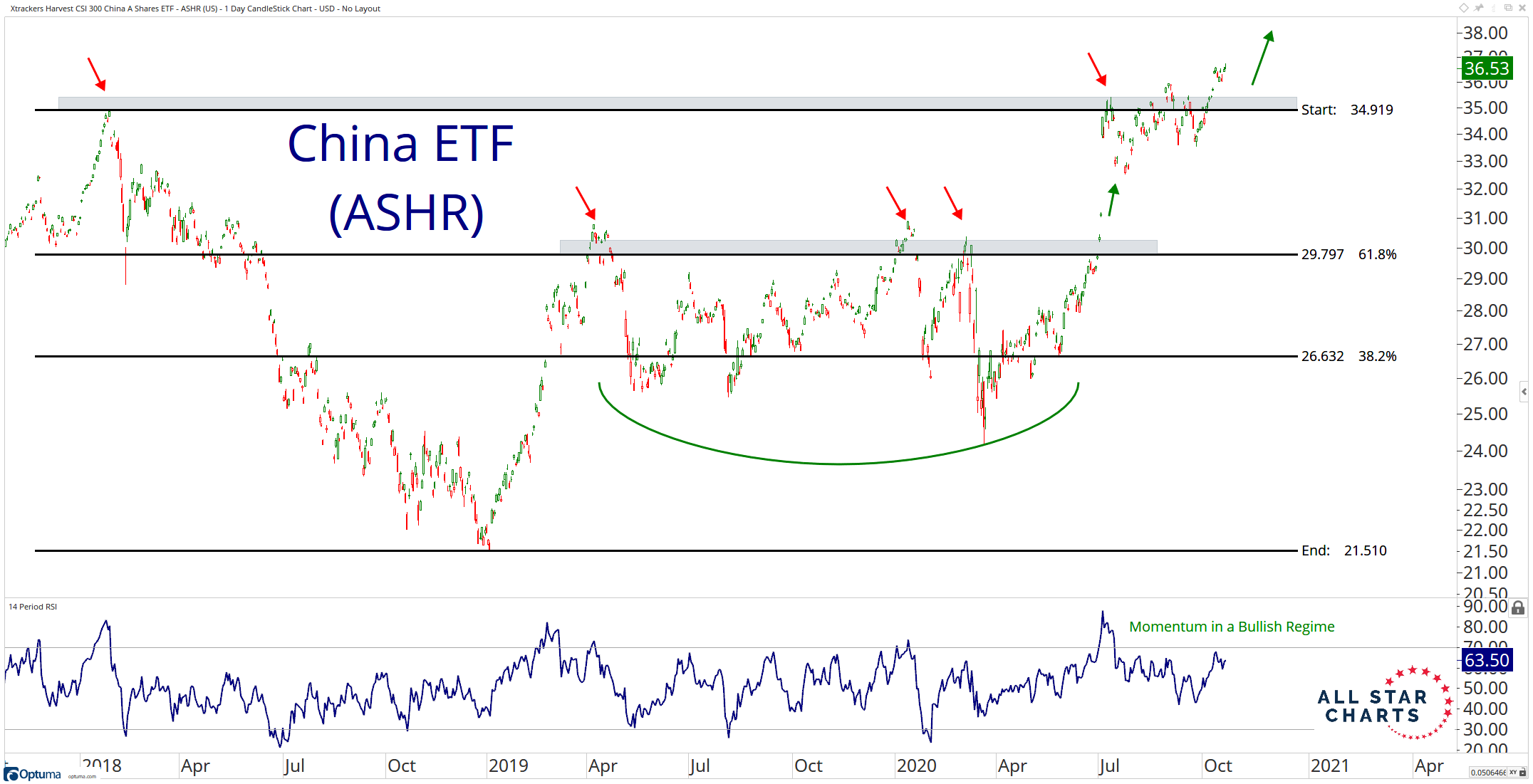 Not only is China the elephant in the BRICs Index in terms of size, but it also has the best looking chart.

Following a 16-month base breakout in July, prices rallied aggressively to their 2018 highs, digested their gains for a few months, and then just this month took out those key former highs. We like China a lot here, and that bodes very well for both the indexes in question.

The question that remains is simple:

Are countries like China and India going to lead the way and drive the Emerging Markets and BRICs indexes higher relative to US stocks?

Or do these countries falter here in which case both ratios likely resolve lower, in the direction of their underlying trends?

When we take a look beneath the surface, the weight of the evidence suggests that these bottoming patterns are more likely to resolve higher.

To stick with my fishing analogy from the Mystery Chart post, this catch is looking more like a juicy shrimp than a muddy catfish.

Do we have this right? As always, we love hearing from you so let us know what you think.