Next week I will be sending out our Q3 playbook. Email me if you’re not already a Premium Member. There are so many interesting things happening right now that I think there will be plenty of opportunities to make money next quarter, despite it supposedly being a slower time of the year.

When months close at 4PM ET, I can’t help myself but hit those monthly charts right away. I am very disciplined about never looking at them before the month is completed. You get into bad habits like that. So I look forward to the monthly candlesticks being done:

Let’s get right into it:

Here is the S&P500 up again for the month of June. That makes it 3 in a row after falling in February and March. It wasn’t much and certainly closed near the lows. But the point of this exercise is to identify the primary trend and see if anything has changed. We have been in the camp that the S&P500 is in a structural uptrend with a target near 3000. This has been the case since breaking out above 2400. The behavior of this market is consistent with this being a normal consolidation taking place about half way up to its target, which is perfectly normal: 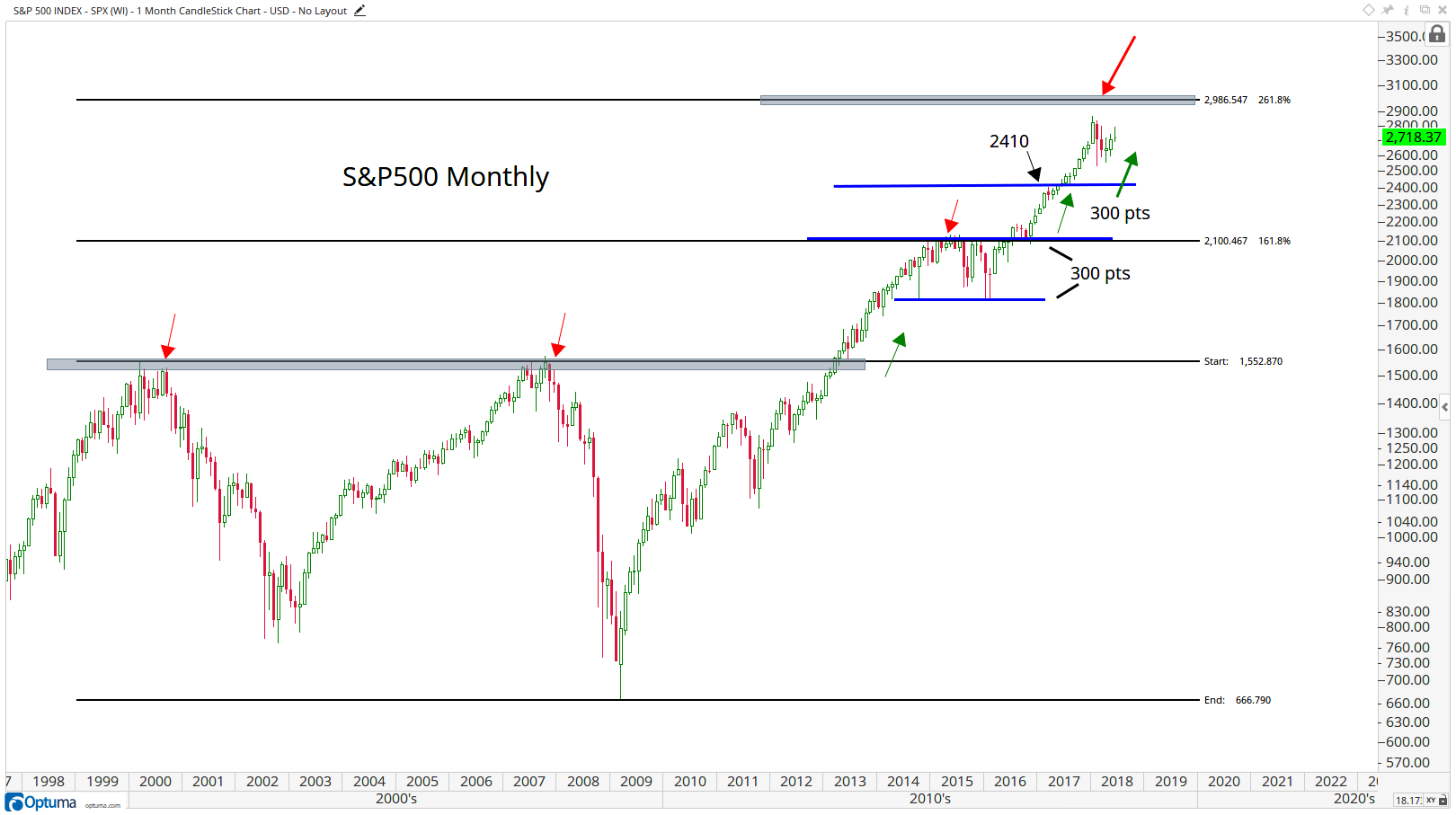 The Dow Jones Industrial Average, on the other hand, has been stuck below this overhead supply since hitting its target in January. While it is perfectly normal that prices consolidate near these upside objectives, we still do not have a breakout. We are looking for new 2018 lows to suggest that we have a larger correction on our hands, one that can take the down towards 21000. I’m not suggesting that is what will happen, but the longer this takes to consolidate, the higher this probability becomes: 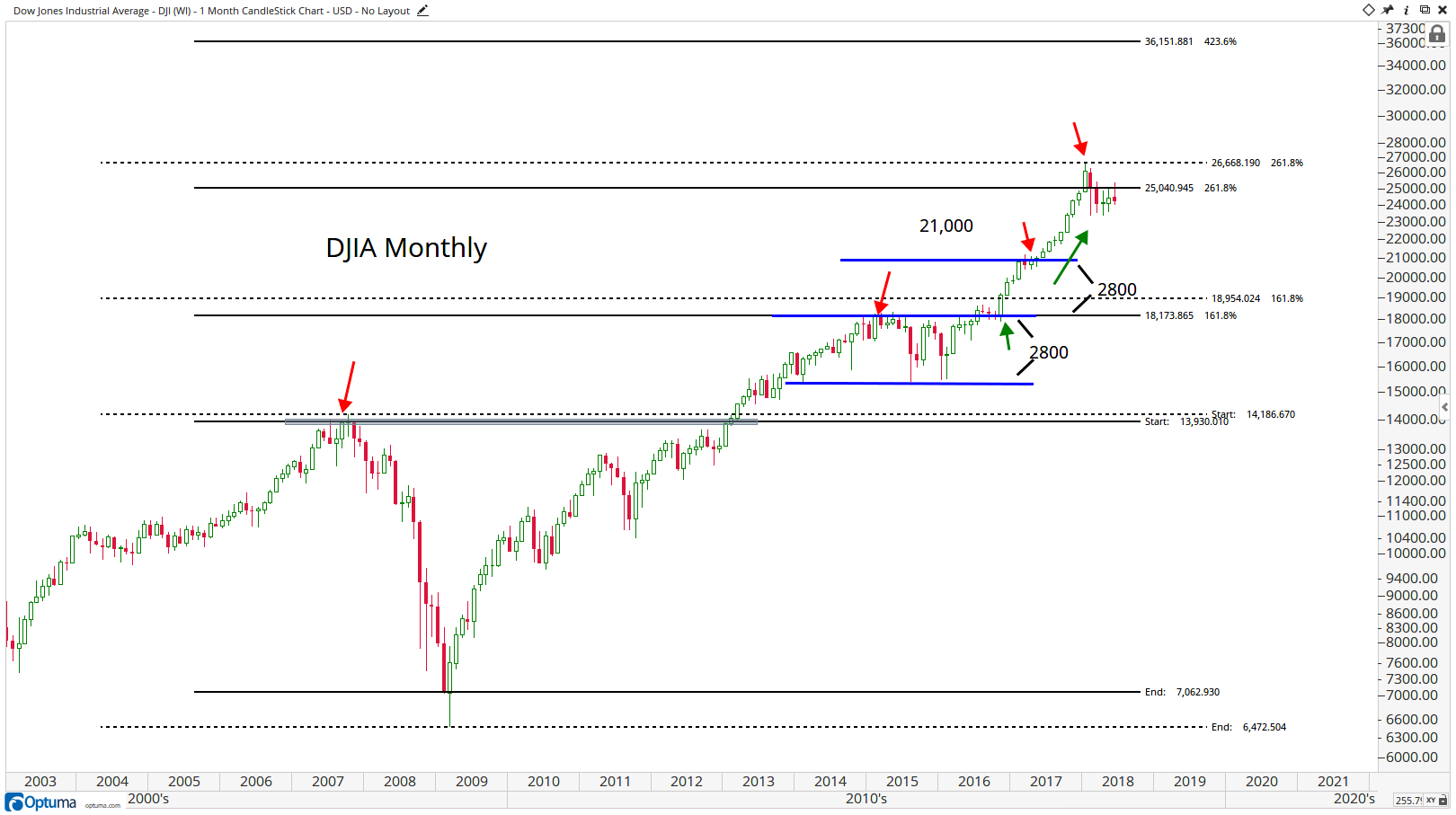 Like its Industrial Average counterpart, the Dow Jones Transportation Average has also been spending the past 5 months below overhead supply. This 11,000 level had been our target for a reason. The market respects these levels. We want to get aggressively long Transports if we’re above those highs and holding above 11,000. Until then, it’s in the same predicament as the DJIA: 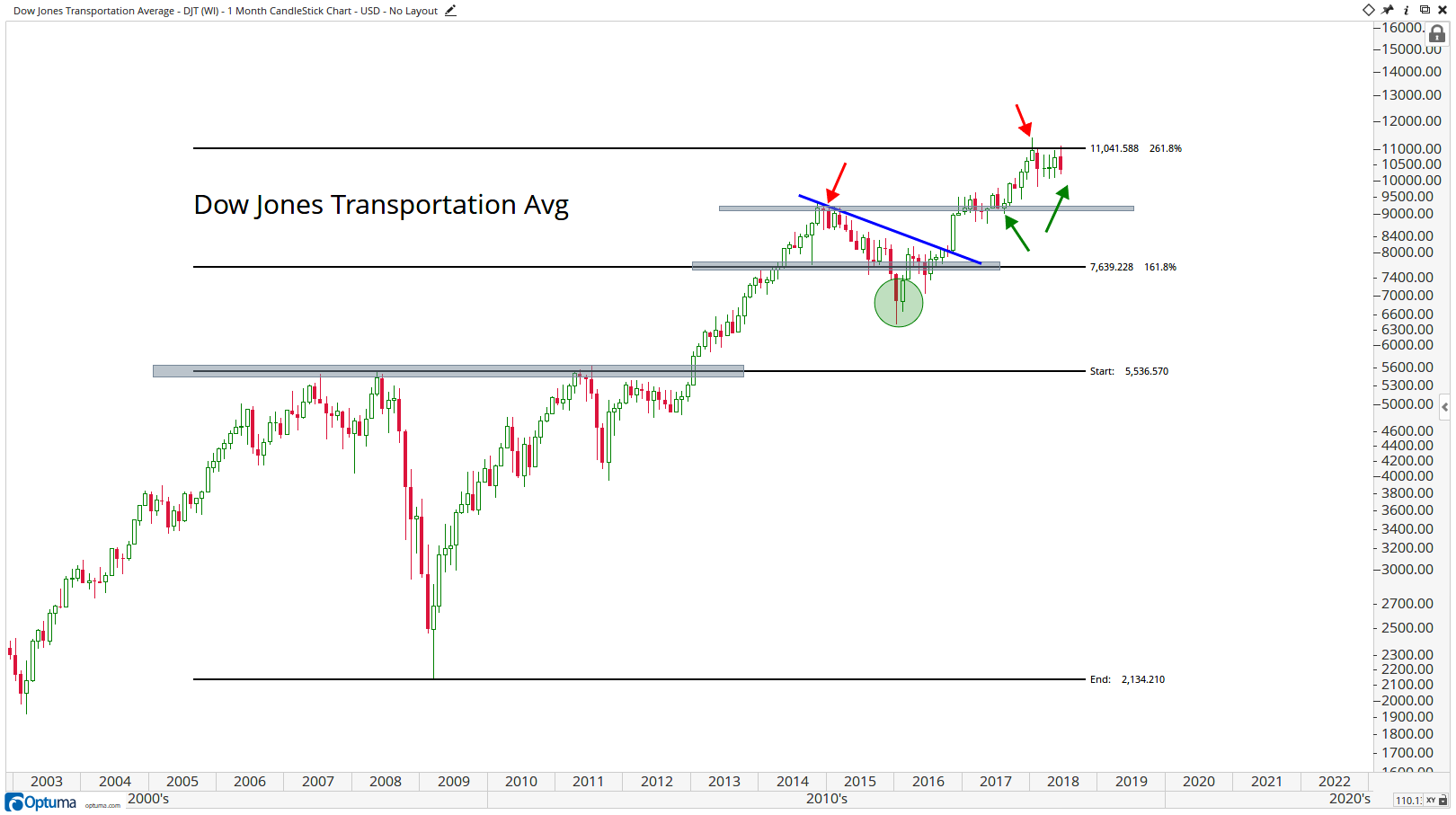 The Nasdaq Composite is in that same group. This month it attempted to finally break out above that overhead supply, but failed. Although it is once again making a new all-time monthly closing high, we’re still below 7600 which is the big level we’re watching. Penetration through that would signal there is a lot more upside to go, in a similar way to the Transportation average getting through 11,000: 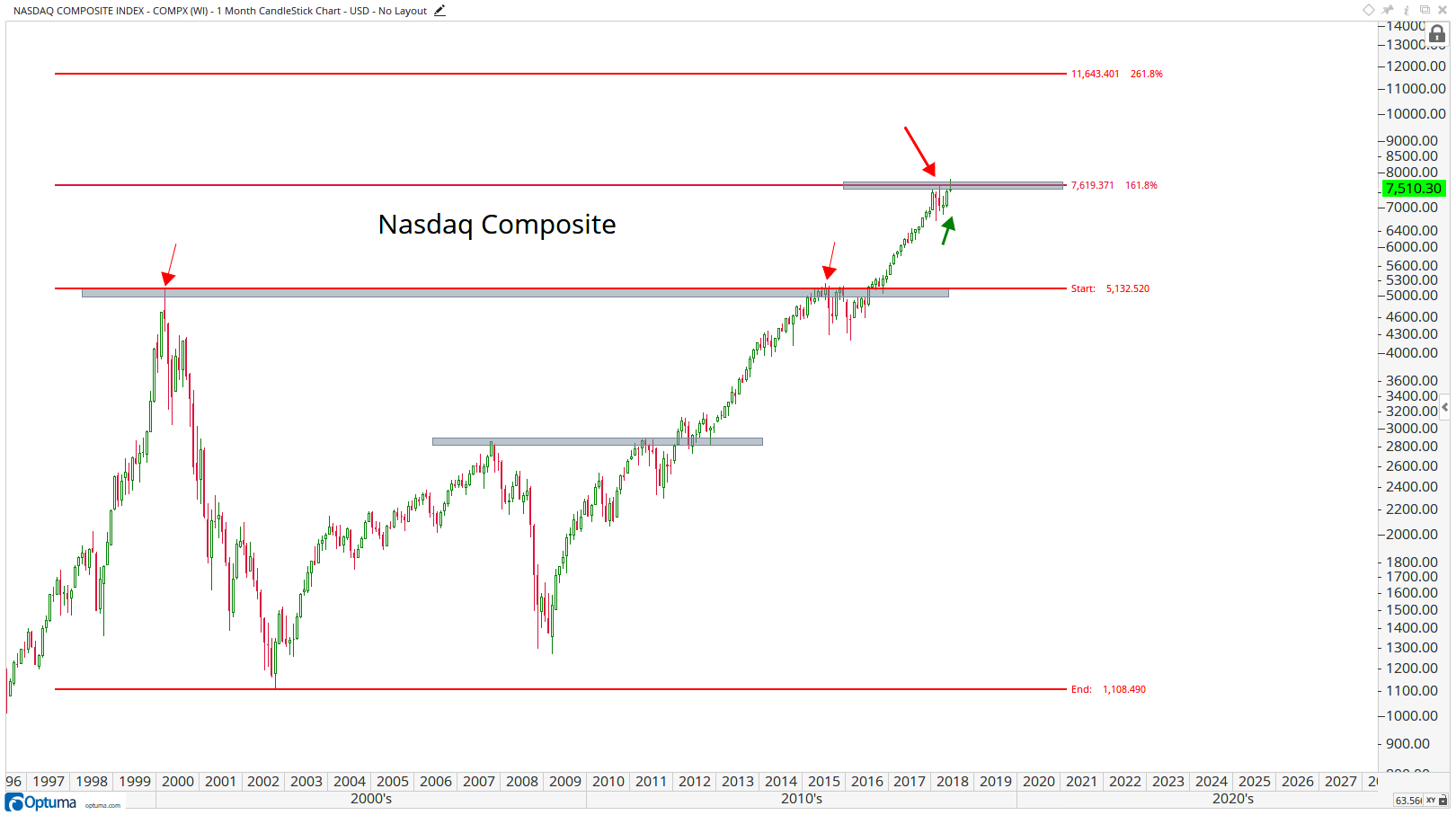 In the non-large cap world, I still think the Mid-caps are the key to risk management here. That 325 level in $MDY really is the most important level of all the indexes. While the Dow Jones Averages and Nasdaq have been consolidating below resistance, the mid-caps have been consolidating above support. This relative strength is a big part of the bull case for U.S. Stocks. If we’re below 325, the implications here are not good at all. However, the higher likelihood and still where we stand is that it holds and rips to new highs, leading the rest of the markets higher: 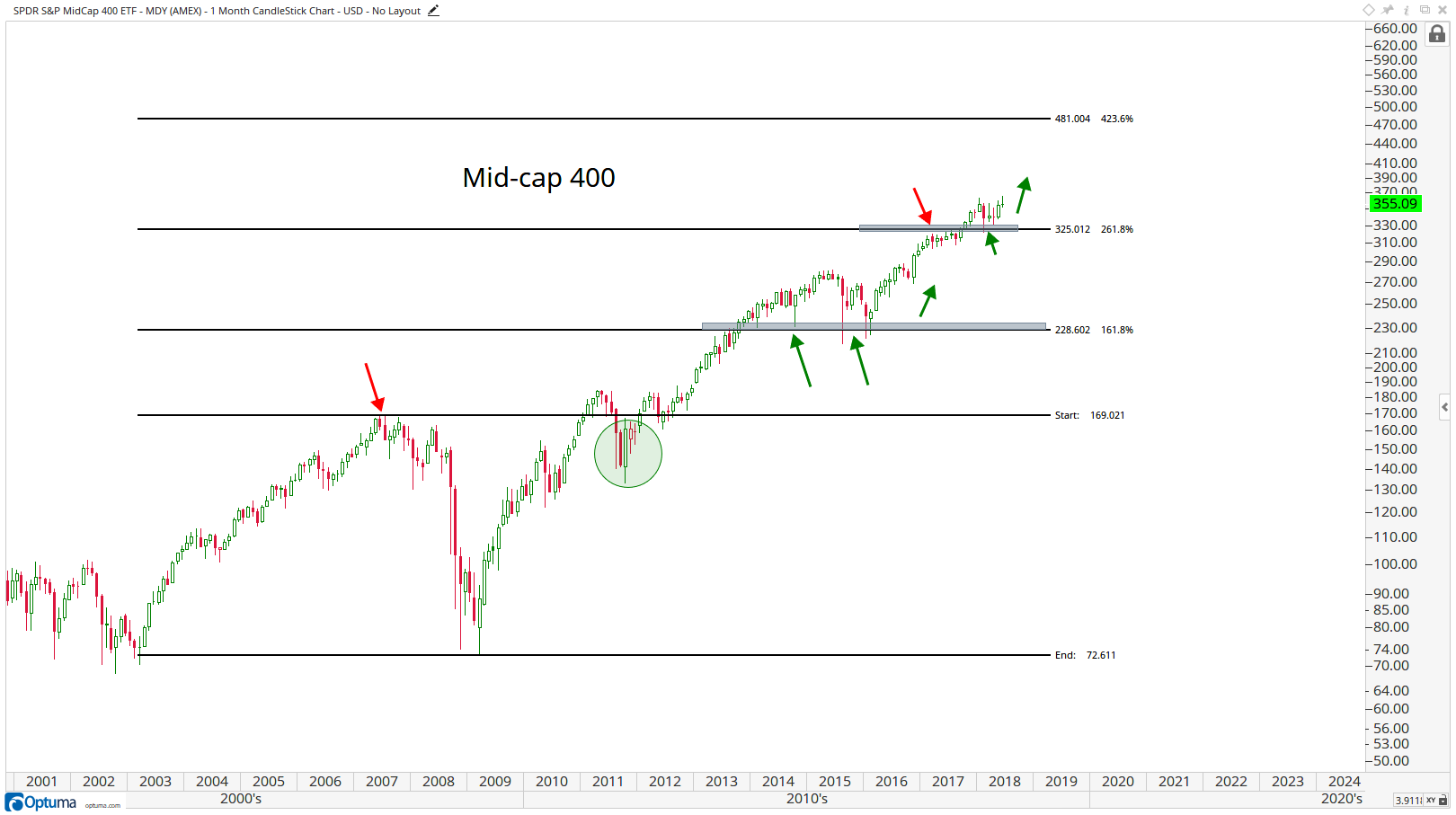 You guys know I think J.P. Morgan is one of the most important stocks in the world. It’s breakout before the election in 2016 was an amazing tell and show of confidence that kept us very bullish into 2017 and beyond. More recently, prices broke out again last Fall and strength here has been a big part of the thesis to be buying stocks, not selling them. It looks to me like prices are consolidating about half way up to its next target above 136. This is a very similar situation to where the S&P500 sees itself today, which is not surprising whatsoever: 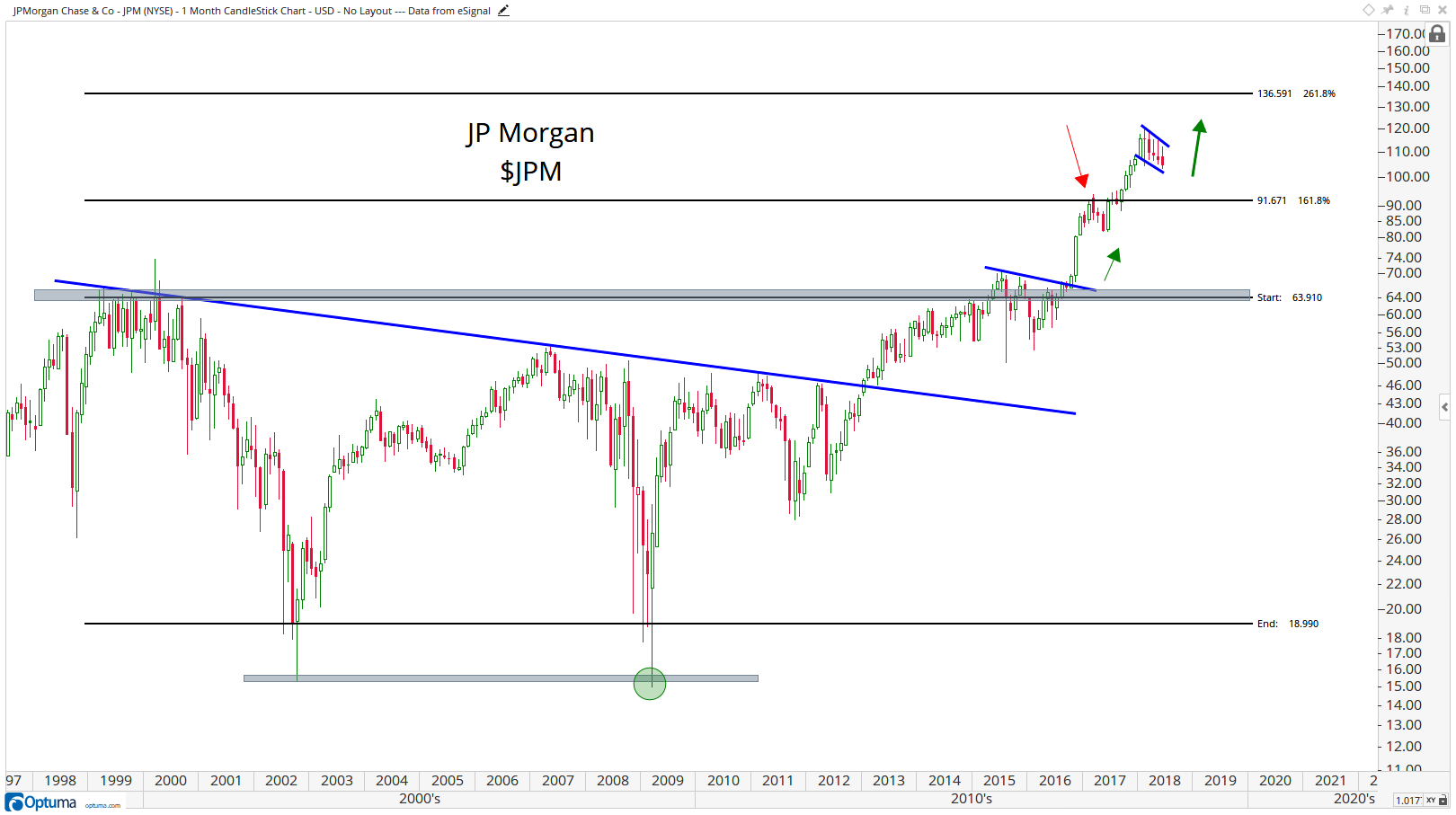 Does this chart above look like a massive top and a completely arbitrary level, or does it look like a consolation right in between support under 92 and its target above 136?

The biggest problem I see continues to be Goldman Sachs. This cannot find a bid and is down 5 months in a row. Our trade has been very clear to be long $GS if we’re above 250. So obviously if we’re below that, then there is no reason to be long. But in addition to that, what is this telling us about the rest of the market? Goldman Sachs with a massive failed breakout above its 2007 highs? That’s not something that makes me bullish $GS or this market for that matter. So the bears have a valid argument to be short here with a stop above 250. Not me, I’d rather wait and see if it can recoup 250: 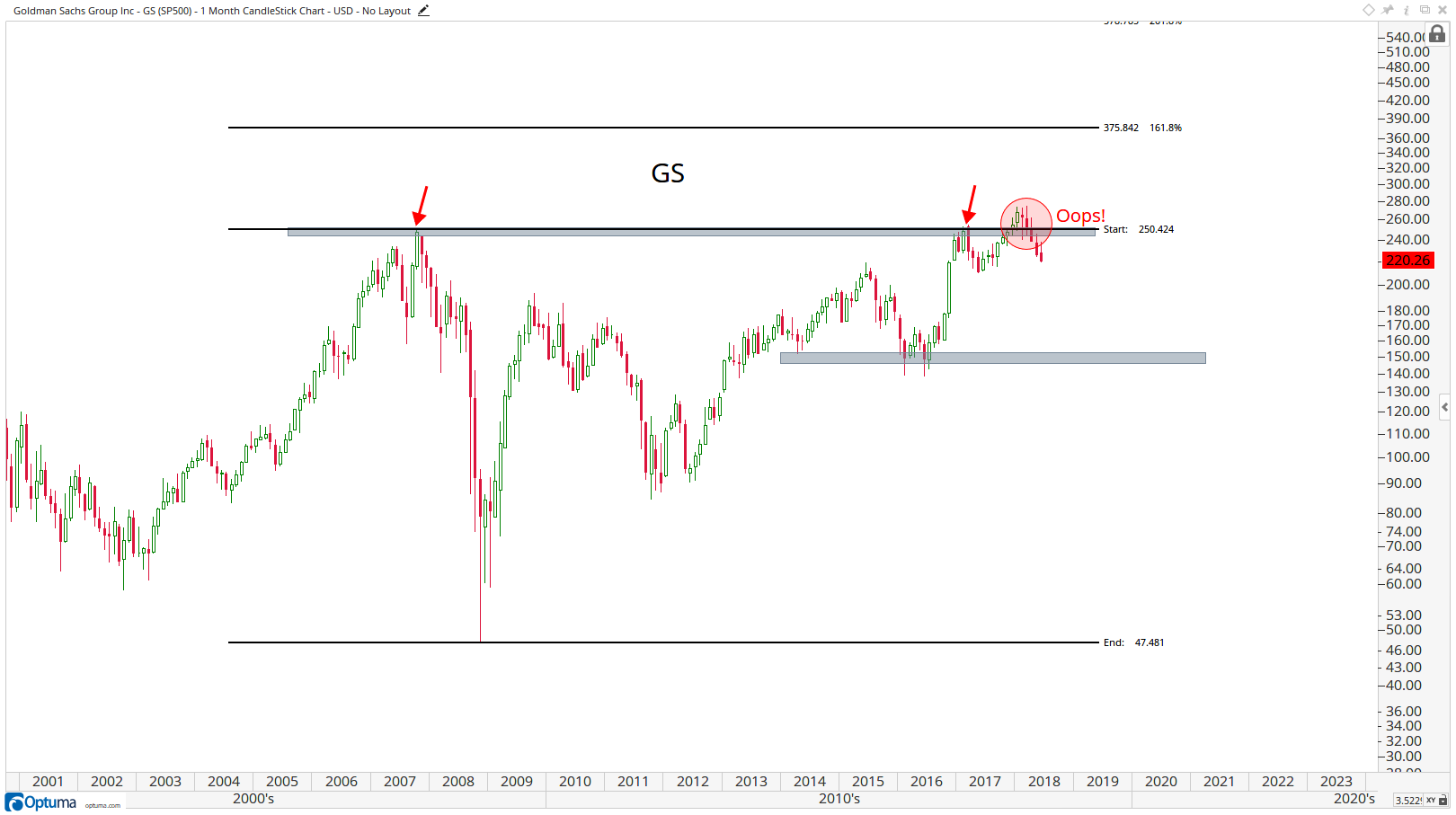 Our job is to weigh the evidence. While this has not been a bullish characteristic, we have to put things in context with everything else. Bulls need to see this recover right away. The bears have a valid argument to use this as part of the bear case for US Stocks.

In other areas, Crude Oil continues to rip higher with another 3-year high. We still think this goes to the mid-80s: 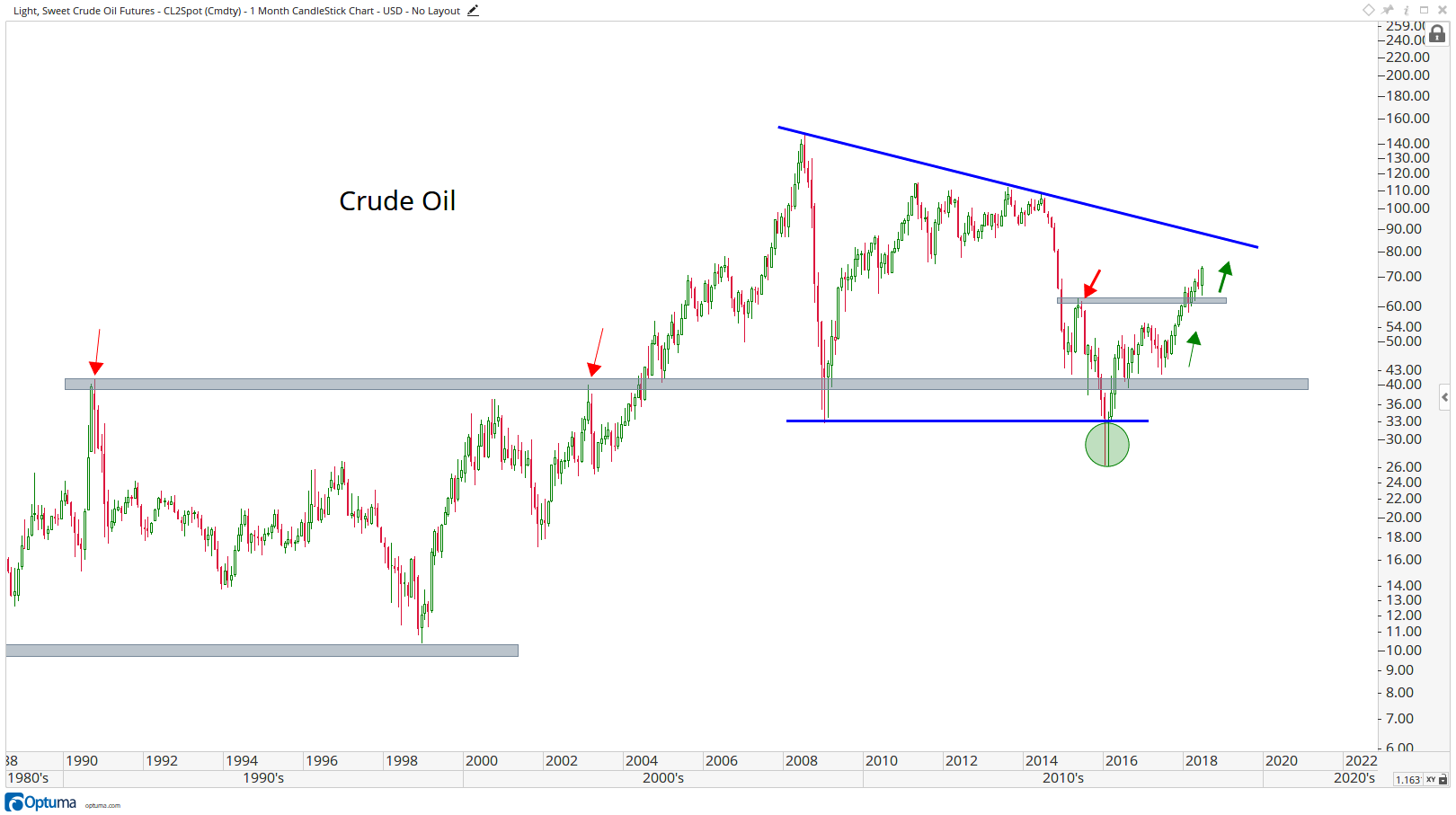 Gold continues to struggle. This is getting no love at all. We’re flirting with some pretty dangerous levels here. The bulls are on their last breath. I would either be long if we’re above 1300 or stay away completely. This is not something I’m thrilled to be involved with right here: 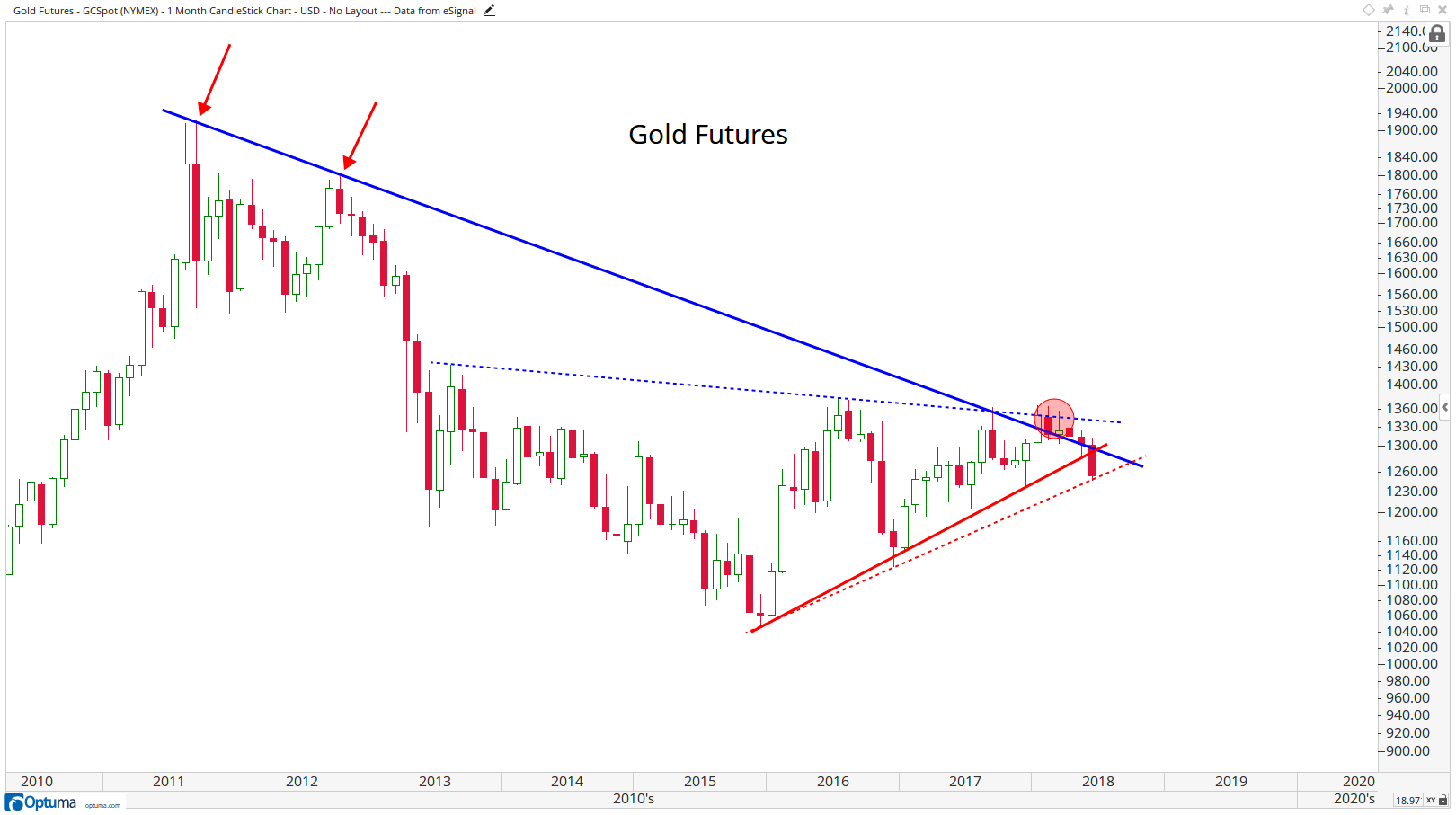 Canada on the other hand went out an a new all-time monthly closing high. This thing has gone no where for 10 years and we’re just now breaking out. That seems important for us to pay attention to: 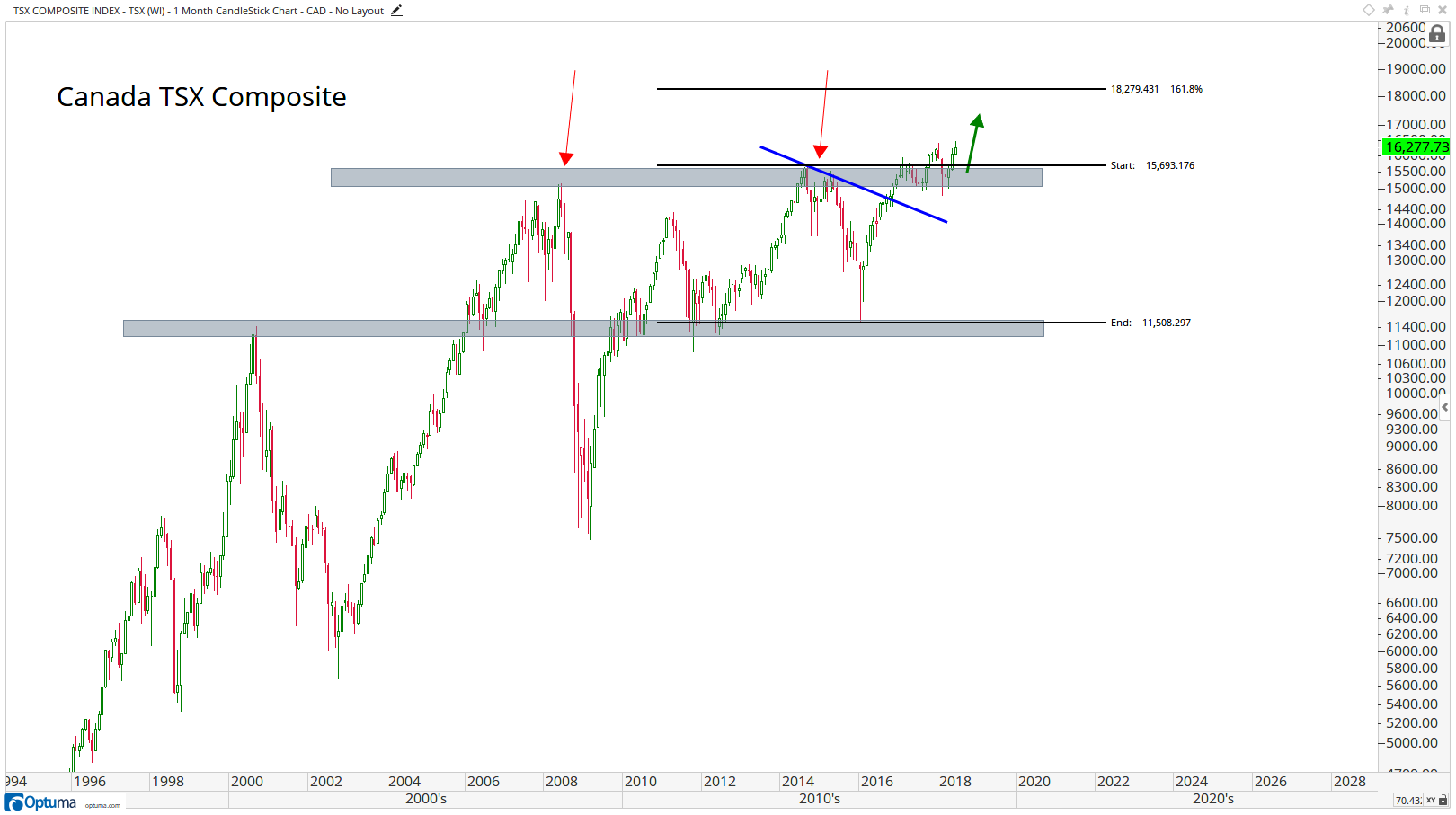 We’re seeing a similar breakout in Australia, which went out at the highest levels since 2008: 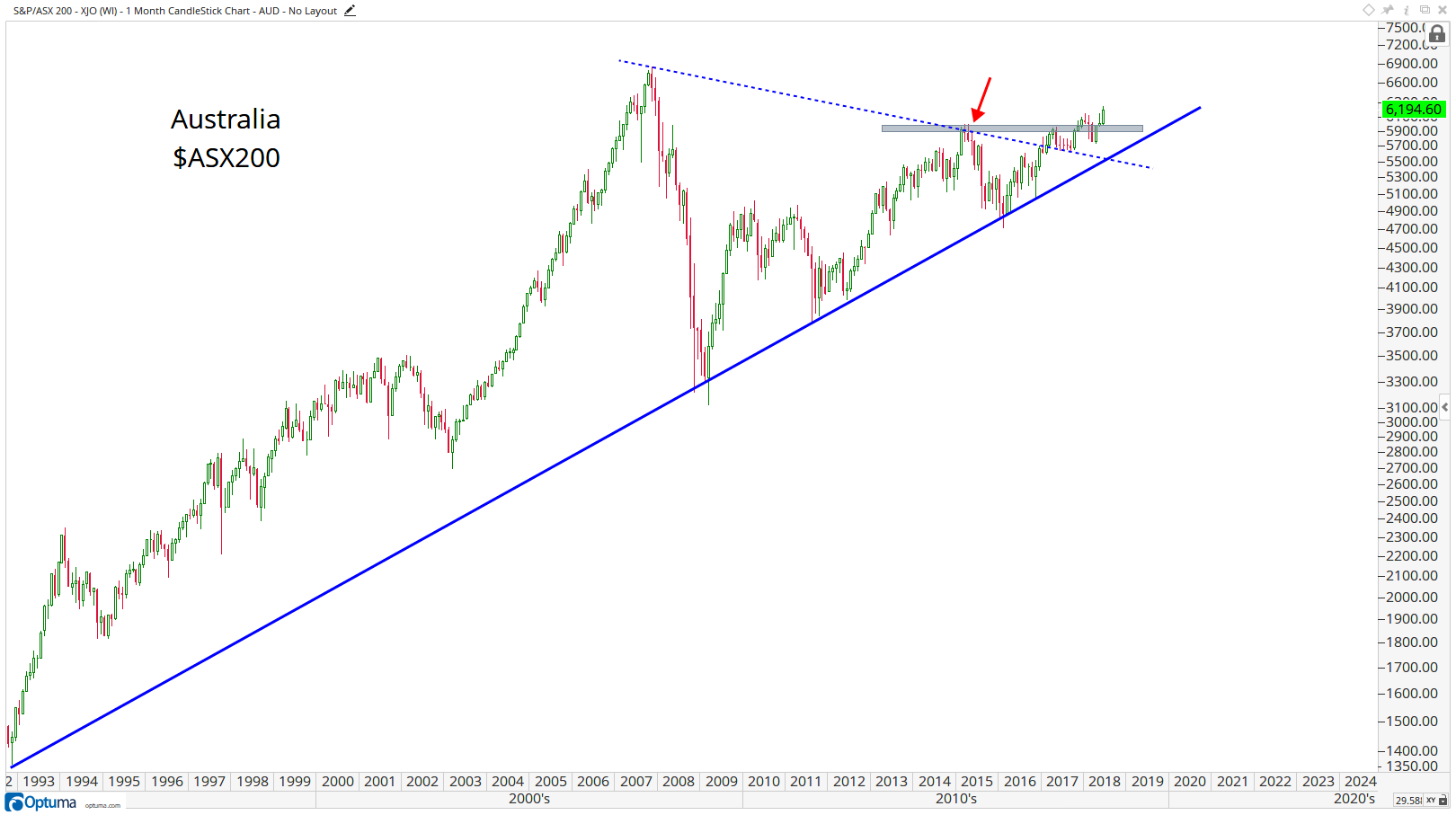 Canada and Australia both ripping to new highs says a lot about the commodity story. Clearly that story is revolving more around energy than in precious metals. Either way, these are positives for stocks as an asset.

In Emerging Markets, they are still stuck below those important 2011 lows. That’s when that 5-year bear market got started. When people talk about how “the stock market” has been in a bull market for 9 years, they conveniently forget that emerging markets got decimated for 5 years in between that: 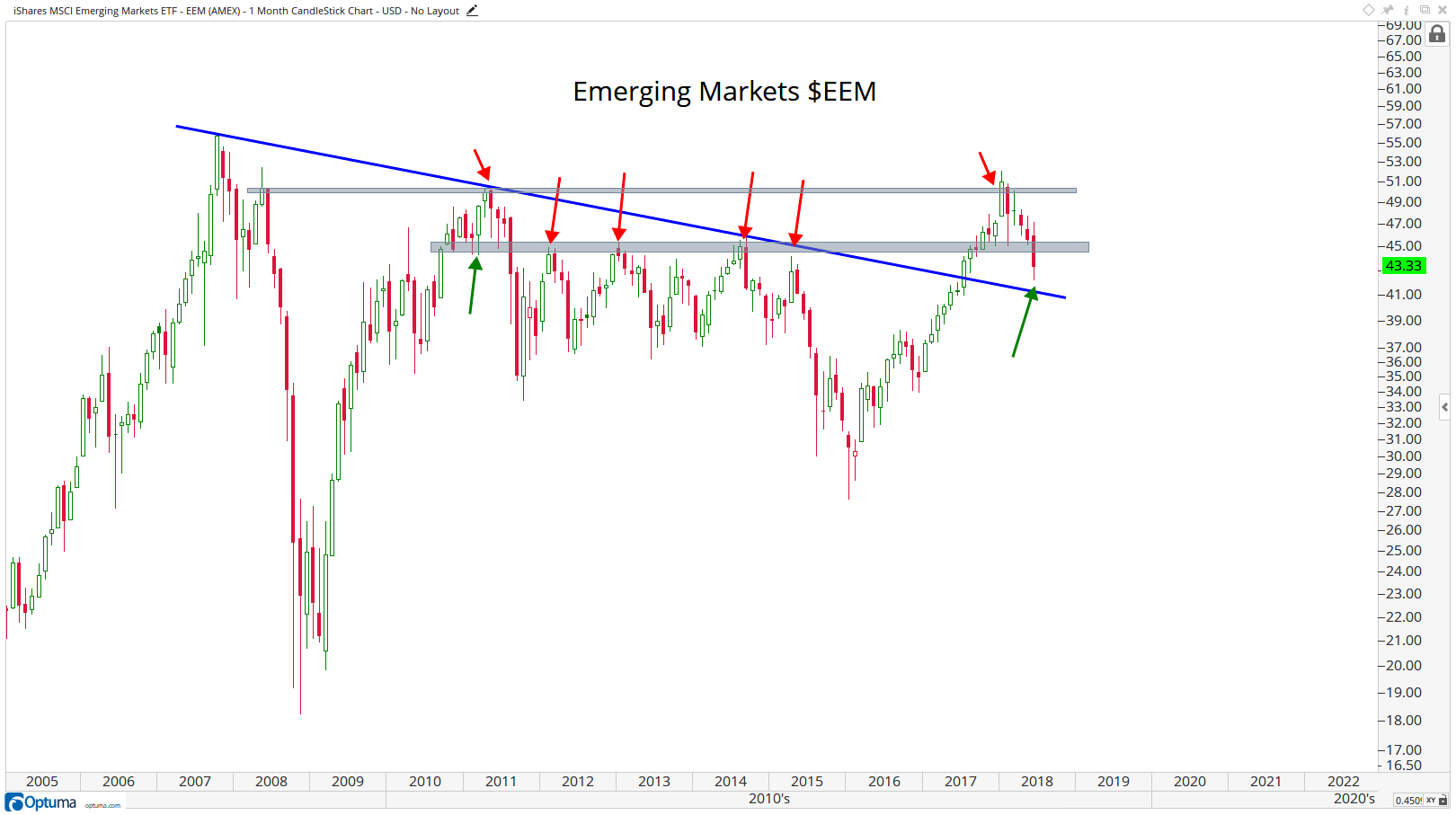 I think we’re in a range bound market here and most likely to rally into the rest of the summer. Looking at a stock like Freeport McMoRan showing strength points that as well. 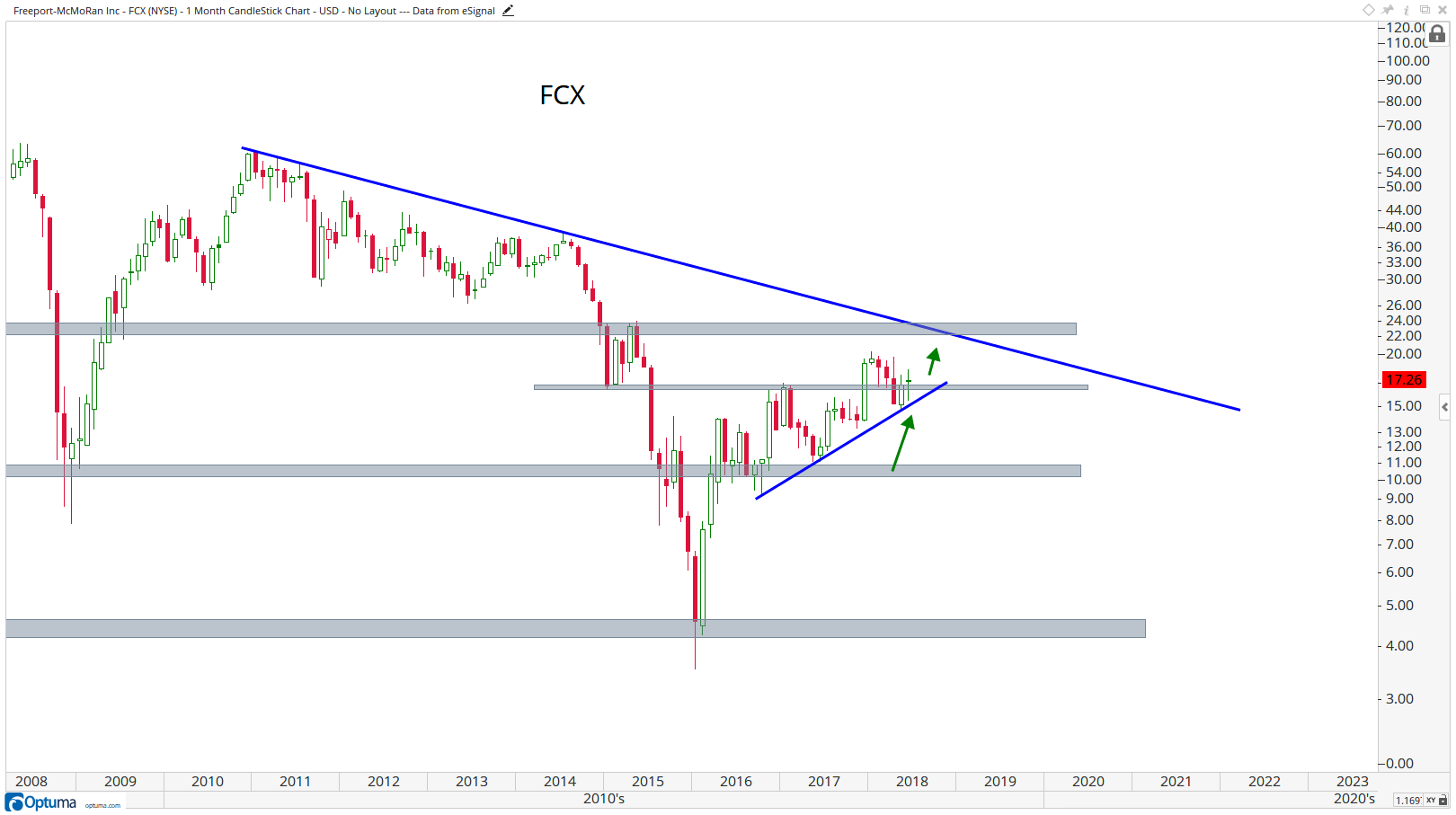 An important commodity in that world is Copper, of course. And we’re flirting with some dangerous levels. Is this a top and collapse sort of scenario or just at the lower end of this range? My bet has been the latter, but if we’re not above 3, then I see no reason to be bullish of Copper. In fact, holding below that suggests emerging market stocks have lower levels to see. My bet is that both Copper and EM Stocks are going higher from here: 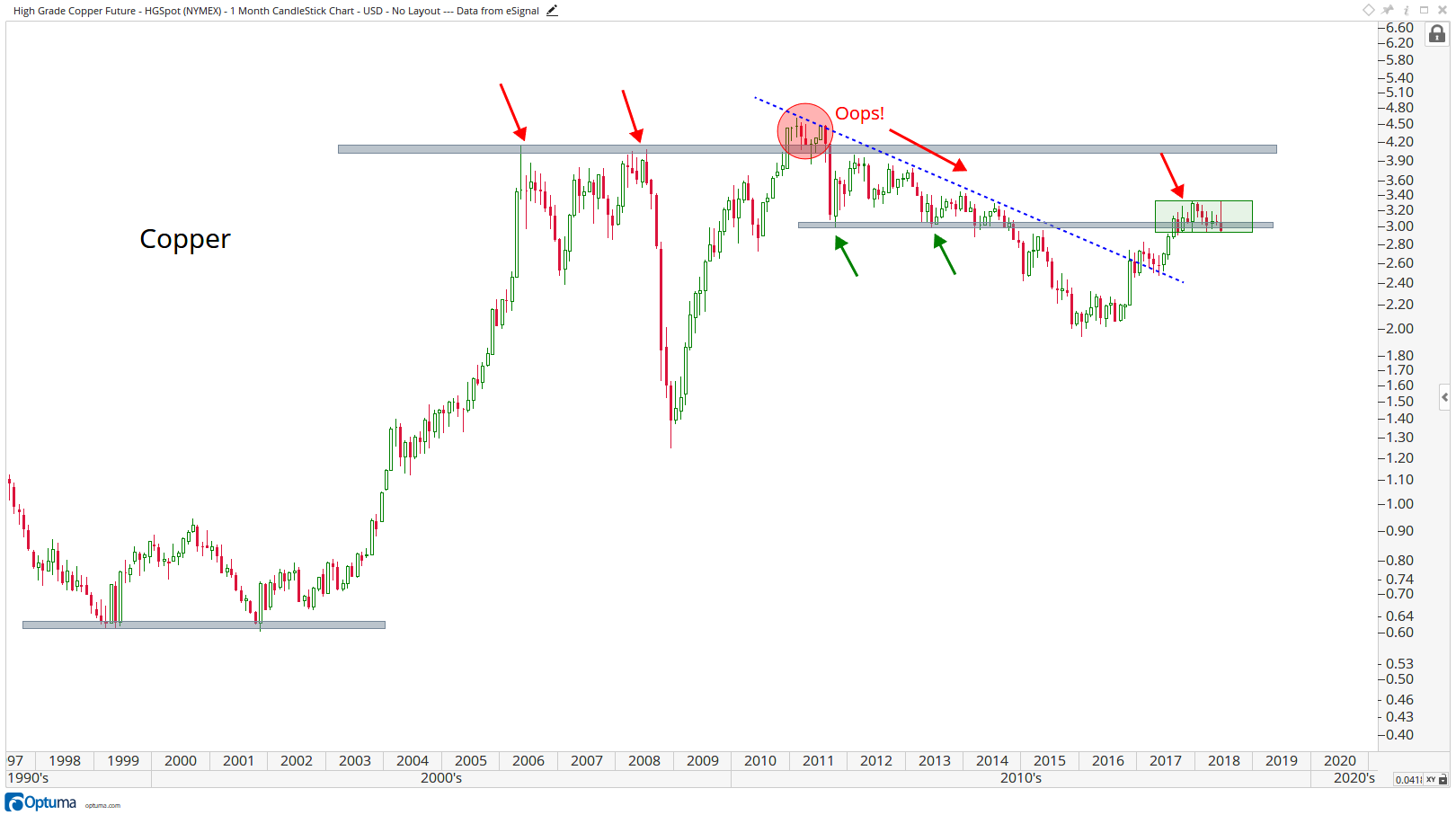 Another interesting one in that world is Brazil. I think a bullish emerging market strategy makes a lot of sense if Brazil is above the highs from 10 years ago: 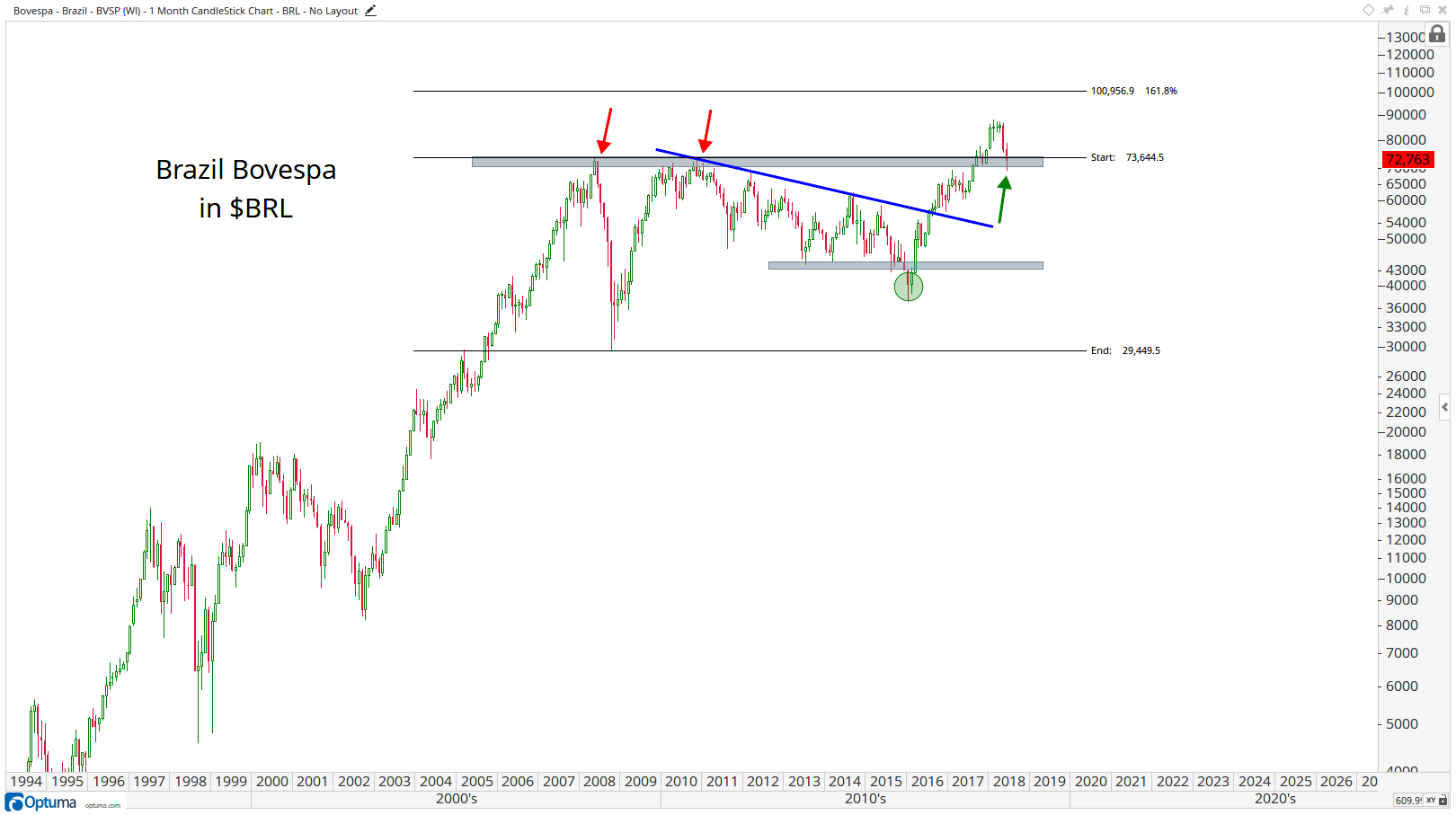 The US Dollar is holding above those prior lows from 2016, putting this definitely in the failed breakdown category. If we’re not below 93, then I see no reason to be short US Dollars, or long Euro for that matter. But if we’re below 93, then a short US Dollar play makes sense, and therefore the impact you may think would happen in case of a lower Dollar environment:

With regards to the US Sectors, Energy had a flat month after the past two monsters. This is a sideways trend at worst and an uptrend at best. Based on the weight-of-the evidence, a bullish approach gives us the best chances of success in our opinion: 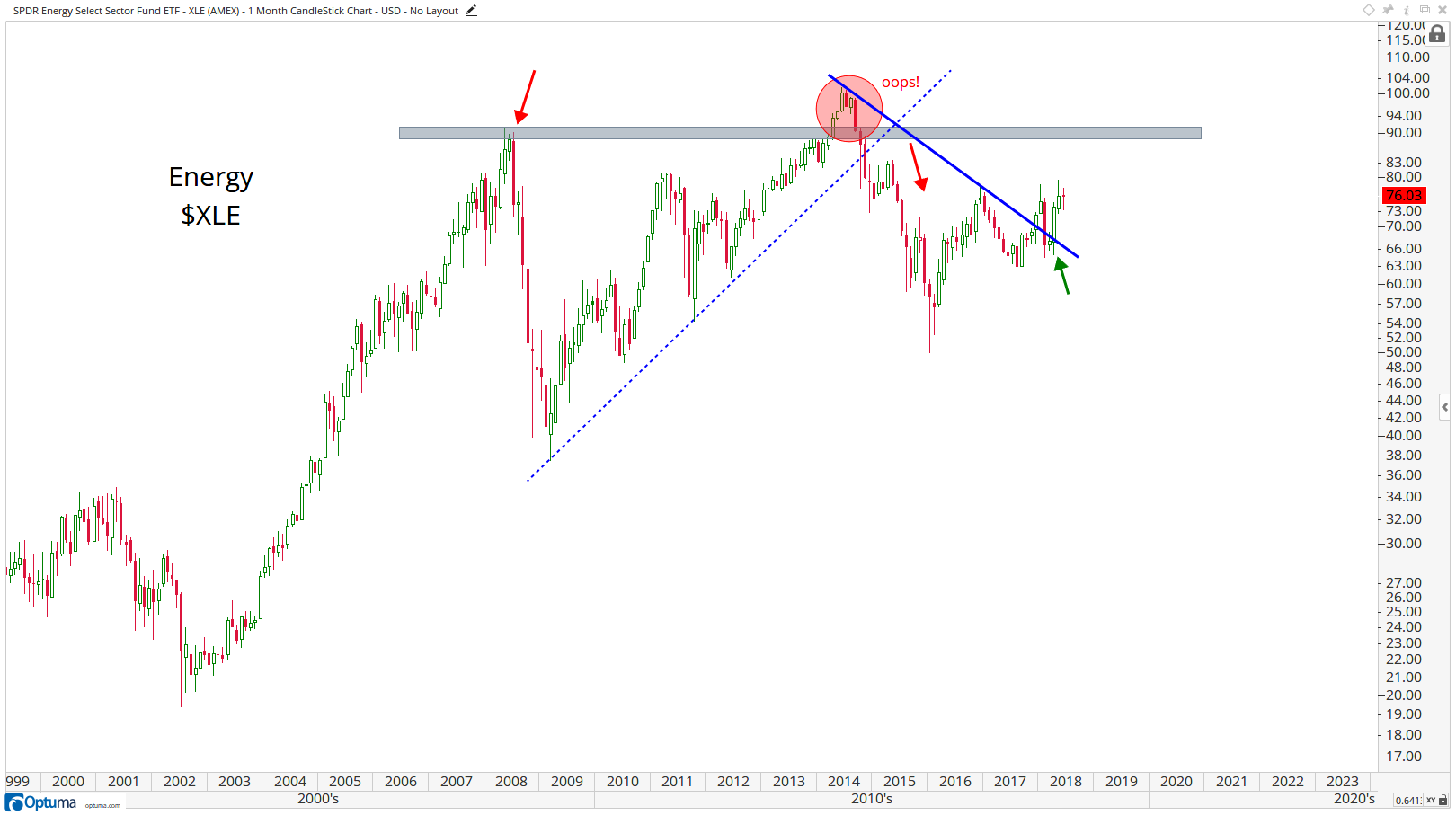 Industrials, which historically have the highest correlation with the S&P500, look similar to JP Morgan and the S&P500. Consolidating in the middle of support and its target, which again, should not be surprising. So we’ll look to this one one making new lows as perhaps a signal of the others falling further as well. It’s a good one as a risk management tell: 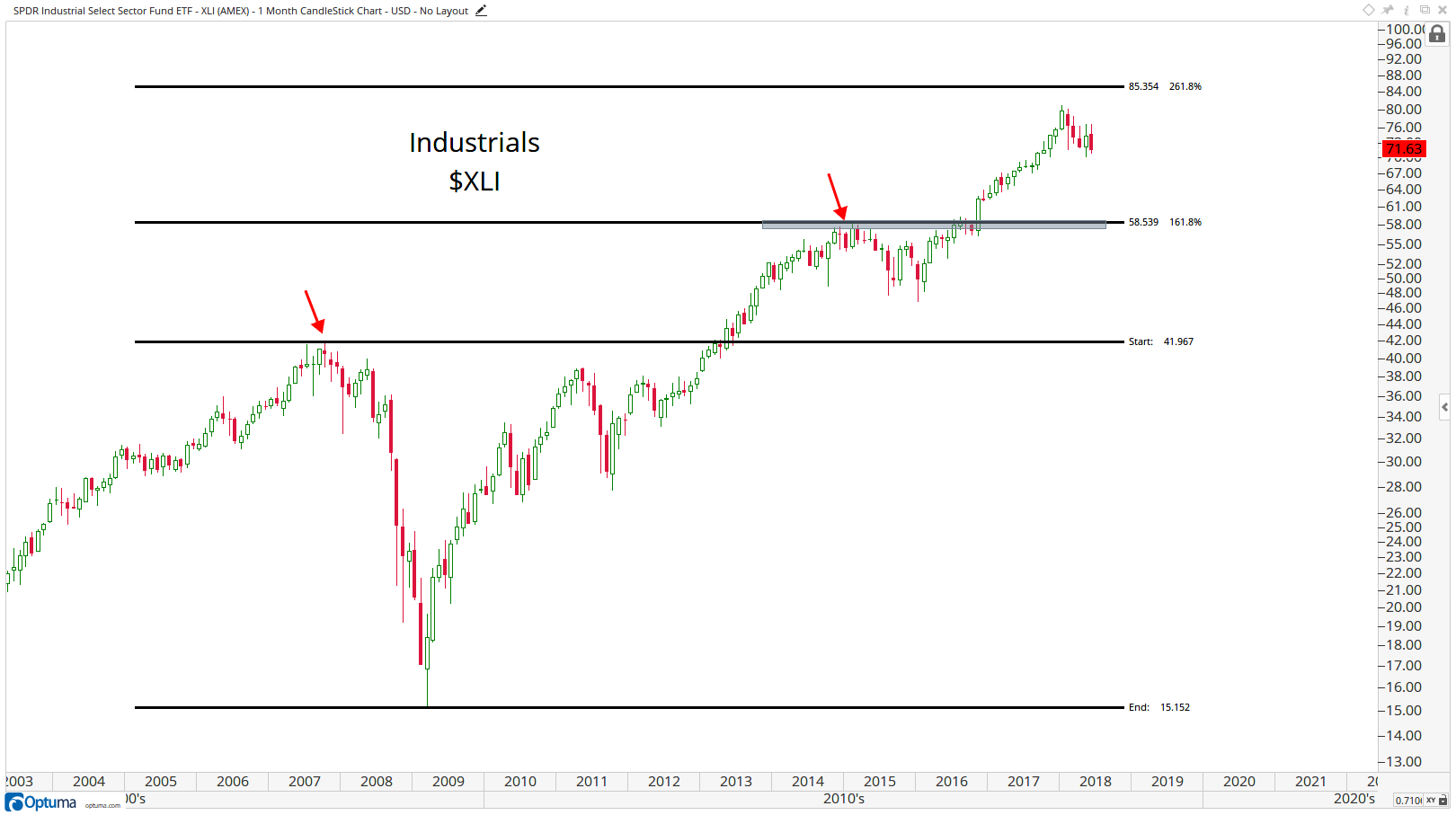 Elsewhere in U.S. Stocks is Technology. This is the big one, the granddaddy of them all with a 25% weighting in the S&P500. My big thing here for a long time has been that if Tech is breaking out of an 18 year base, it’s really hard for me to be bearish both Tech and the rest of the market. That strategy has worked incredibly well. Last month Tech closed at another all-time high. This month it was flat. Our bet is that if we’re above the March 2000 highs, we need to be long Tech from any kind of intermediate to long-term perspective: 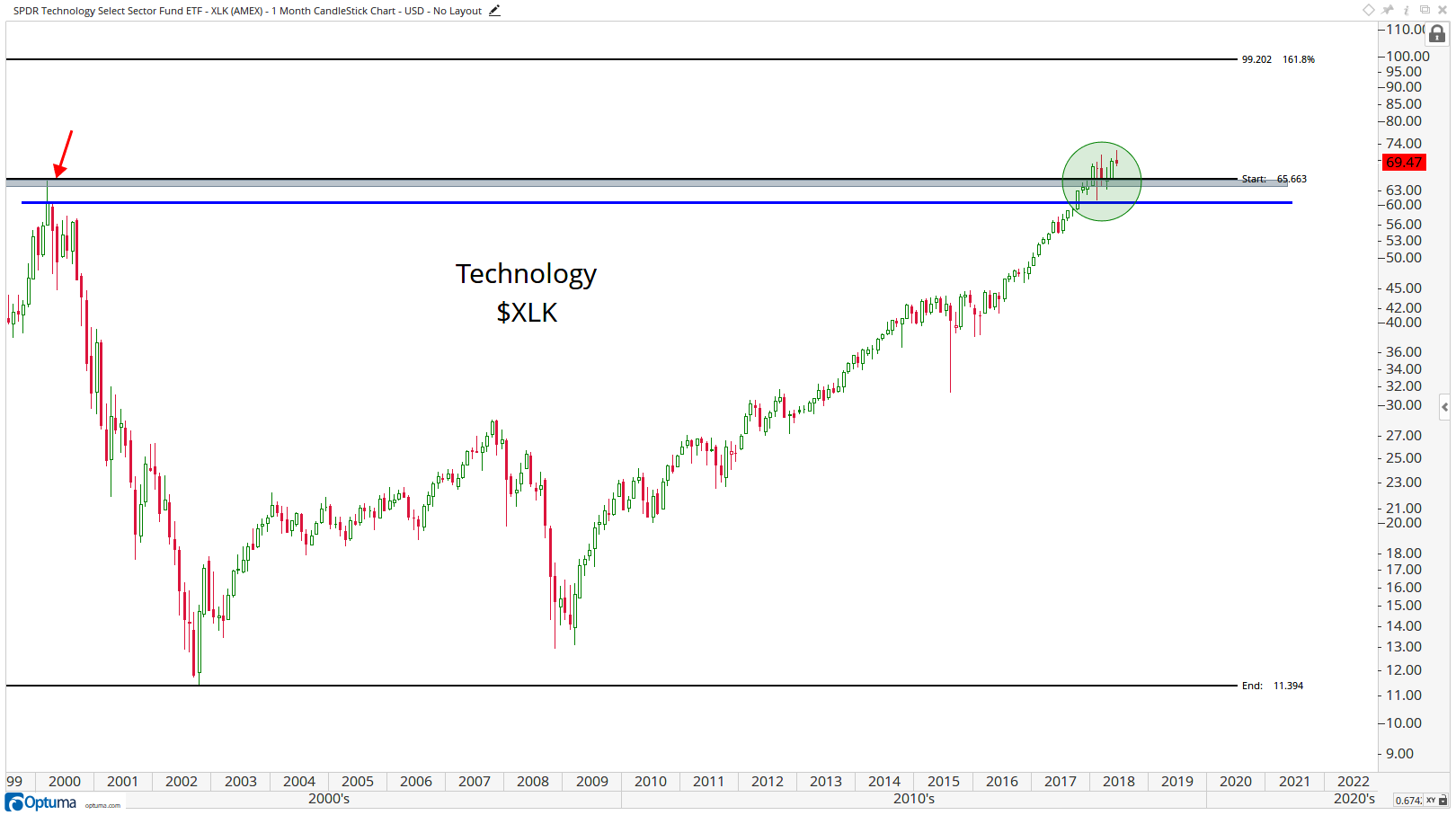 I want to be irresponsibly long Semiconductors if we’re above 1315 in the PHLX SOX Index. It’s that simple for me. If we’re below 1315 then we’ll call this one Rangebouds McGee:

Financials are holding below their 2007 highs. We ran towards that level early in the year and have met that overhead supply. People who tell you that resistance doesn’t matter and that those 2007 highs are irrelevant are lying to you. The question is simple. Is this a massive double top and the Dow down 90% crowd is right? I personally do not think so. For me, it seems like perfectly normal acknowledgement of overhead supply. None of us know how long it will take demand to absorb it. We would feel much more comfortable aggressively long Financials if we were above the 2007 highs, in a very similar way to if Tech is above its 2000 highs: 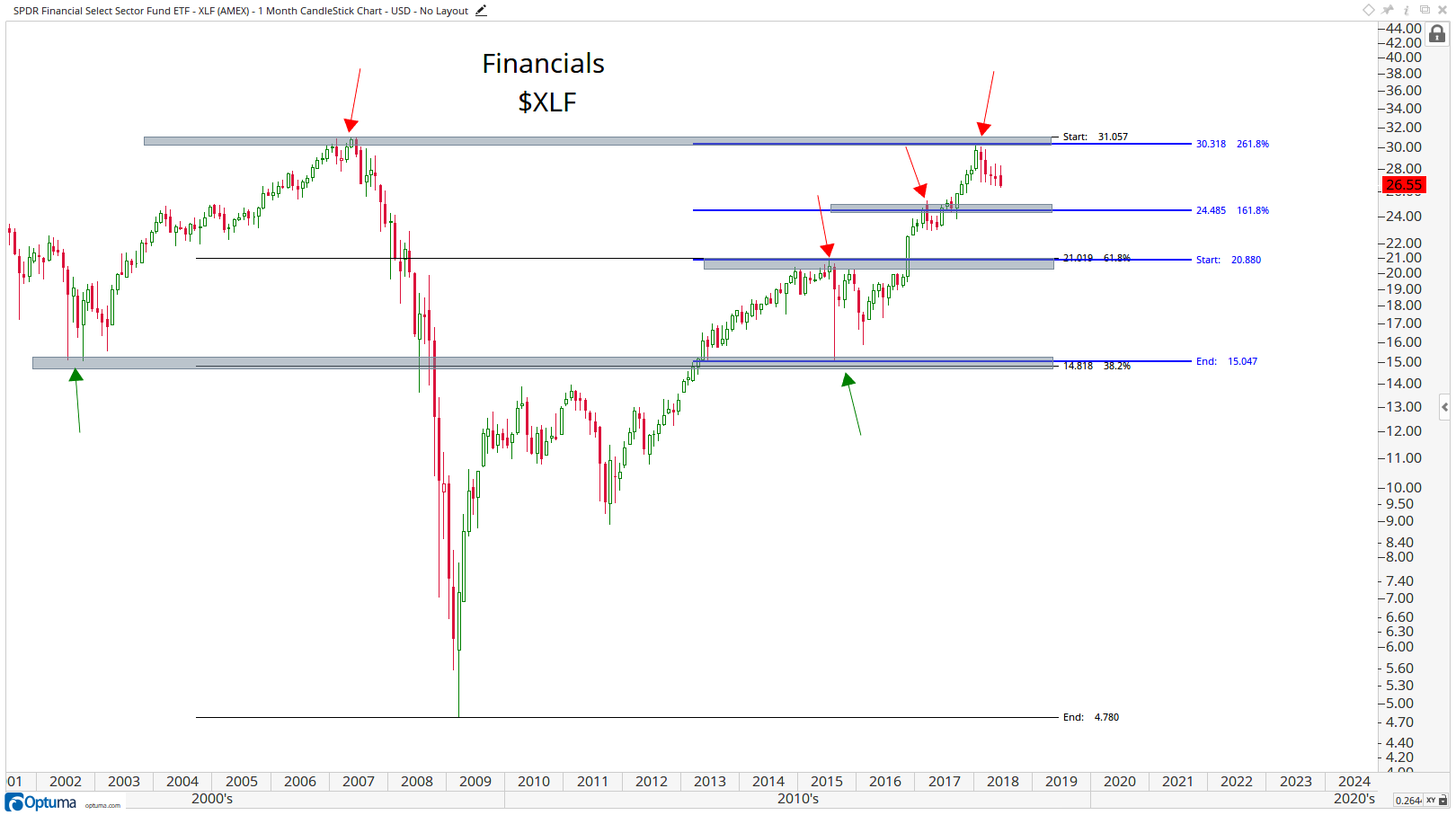 Broker Dealers and Exchanges are already above the 2007 highs, which we’ve taken as a leading indicator for Financials. In fact, the BD & Exchange Index hit new all-time monthly closing highs last month. We want to be buyers of any dips back towards those former highs: 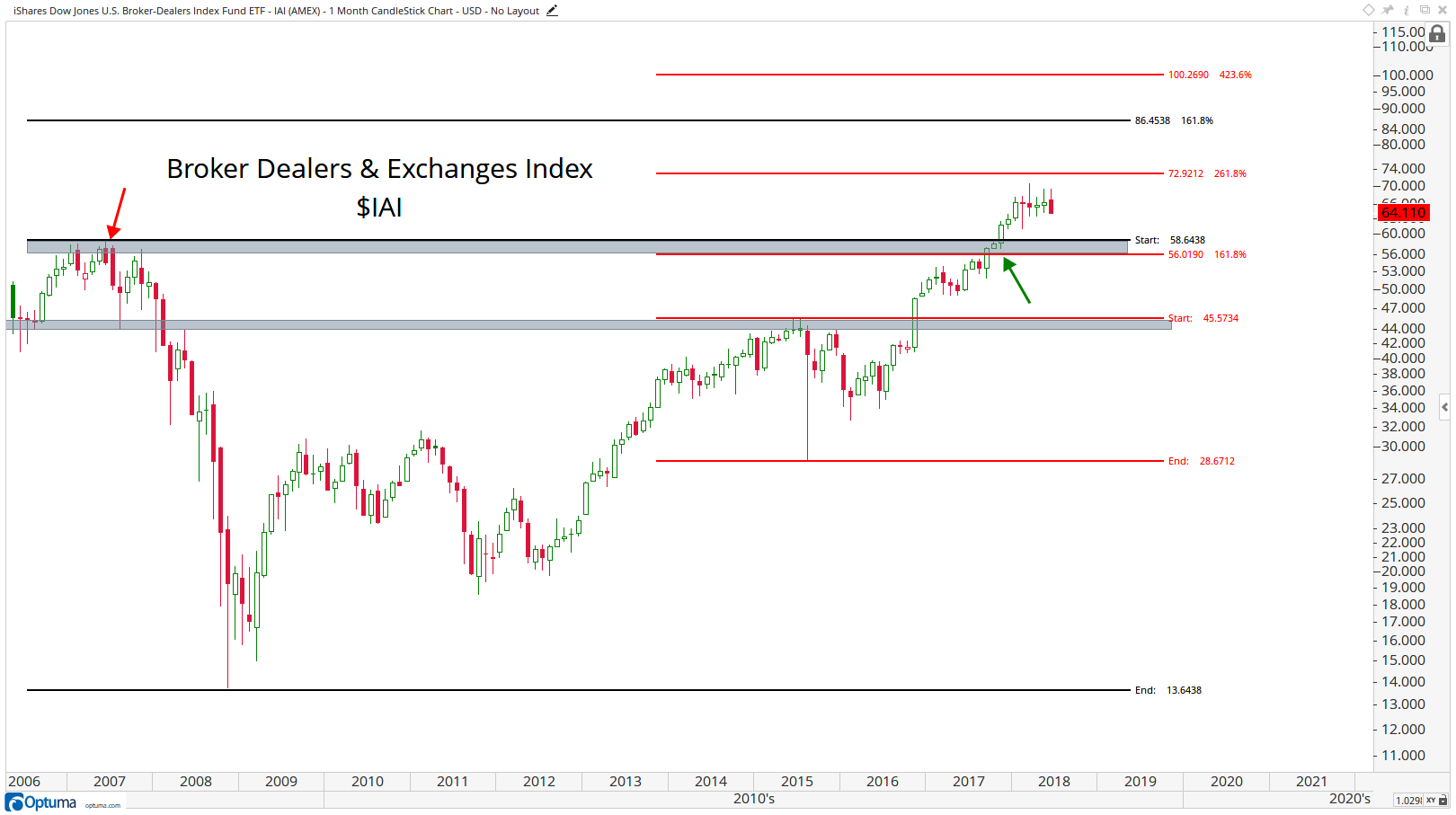 More good news for US Stocks is that Consumer Discretionaries went out a new all-time monthly closing high. This has been a leader for a long time. A 22% weighting in Amazon doesn’t hurt! There is no evidence of a downtrend here, so if we’re above 108 we want to be long Discretionaries $XLY and take a hard look at Amazon. I think XLY goes above 121: 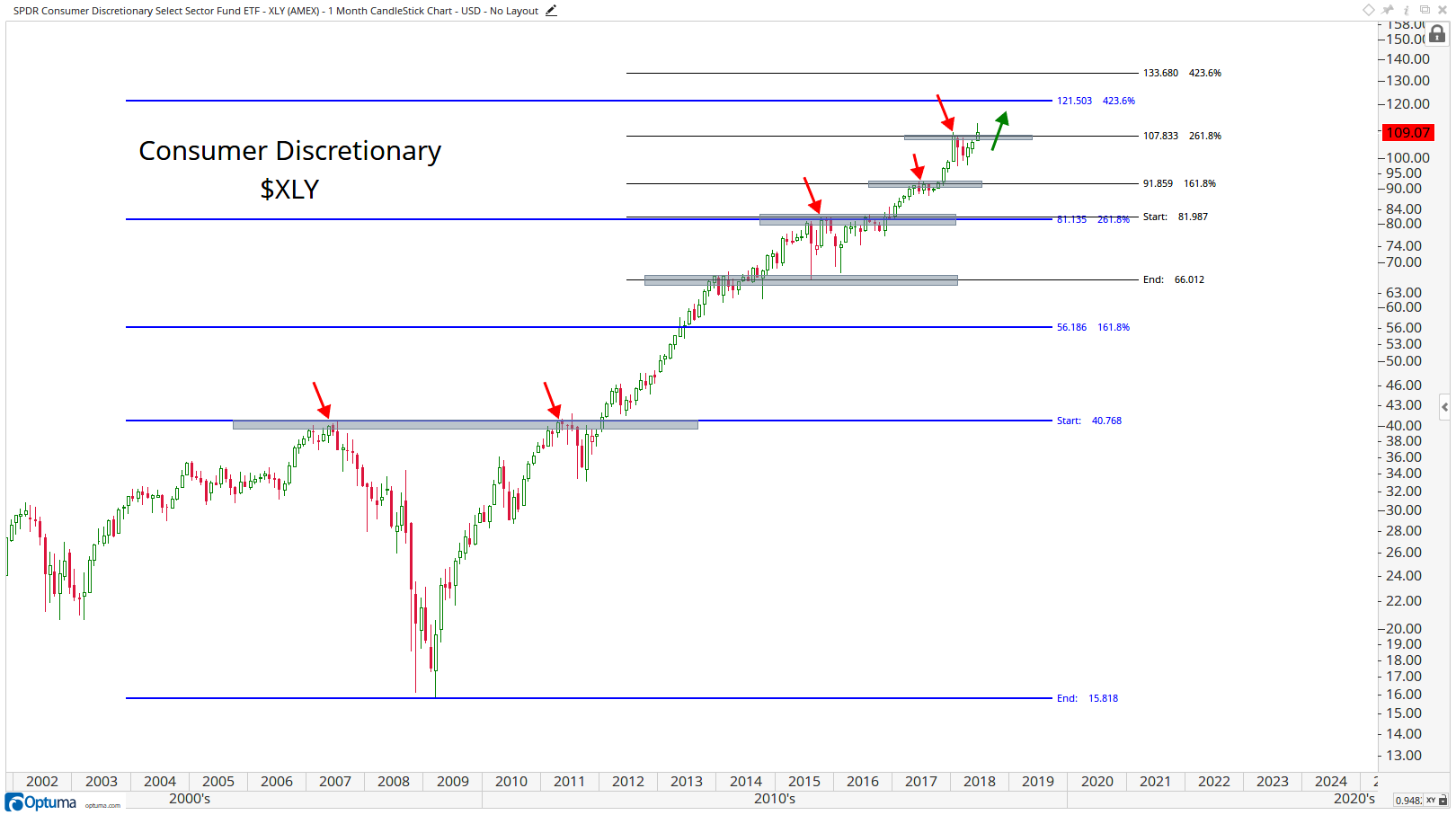 This is a process that I go through every month. It’s easy to get caught up in all the day to day noise. These monthly charts allow us to take a step back and look at the world from a much a much broader standpoint. That multi-timeframe approach gives us a huge advantage over those who only focus on one time horizon.

These posts are normally reserved for Premium Members of Allstarcharts and I if you’re not already a member, I encourage you to try it out risk free and see what you think.

Message me if you have any questions!